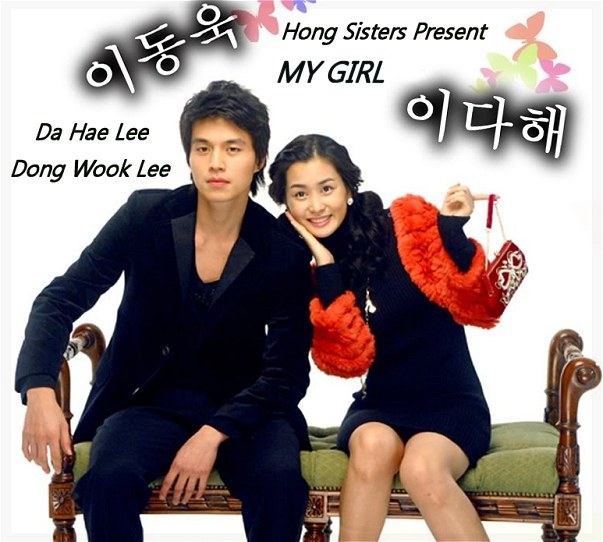 I didn't watch this classic show called My Girl (2005) for the stars, although I liked all of them (especially Dong Wook Lee, who has always been a heart-throb of mine), and a young Joon Ki Lee in an early role was fun to watch, too, rather I watched it because it was a Hong Sisters' (Master's Sun) written drama, so therefore I expected to - and wanted to - laugh. What I wasn't prepared for was that I would ROAR with laughter through 3/4's of it, that I would sound like a cackling hen through so much of this show. I think I even got a sore throat and headache once or twice from laughing so hard.

After seeing actress Da Hae Lee first in the depressing  Miss Ripley  (2011)  melodrama I wondered before I started My Girl how she would possibly be able to do comedy. And prior to watching this show I had watched The Prime Minister And I (2013) where actress Yoona, whom I had first seen in the melodrama Love Rain (2012), had totally floored me with her comedy brilliance in that show. So I should never pigeon hole Korean performers, they surprise me constantly.

Do the Korean actresses all copy each other in the comedic mannerisms required for these hilariously funny parts? While watching both ladies and being surprised at their comedic brilliance, I kept getting flashbacks before my eyes of two OTHER actresses who seemed almost identical in mannerisms to Yoona and Da Hae and they were Kim Sun Ah (My Lovely Sam Soon and Scent Of A Woman) and the actress from Stars Falling From The Sky (2010) named Jung-won Choi. It totally freaked me out how all four of them could have interchanged roles in any of these shows and been exactly the same type of character! Be that as it may, I must simply LIKE that style of comedy acting because I loved all four of these ladies in all of these roles. If they combined all four ladies in one show together the laugh factor would be powerful enough to demolish a city! 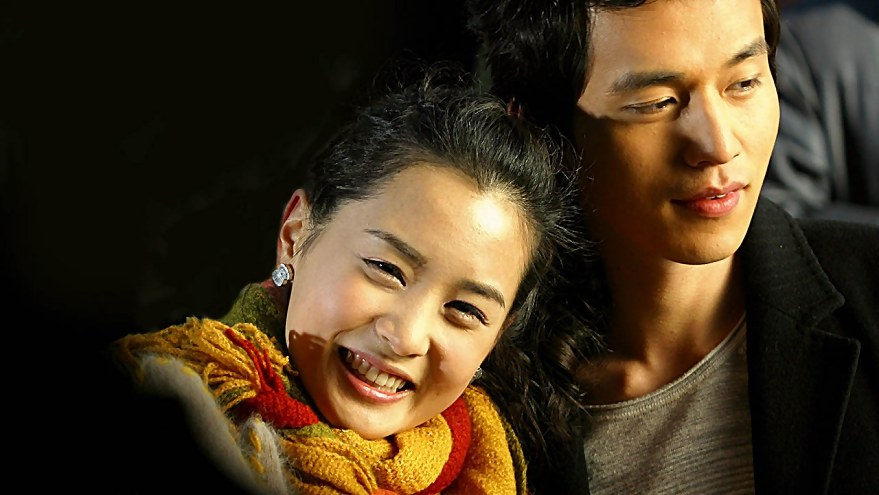 Funny Girl and Straight Man -
they went well together, although it didn't happen overnight!


The Story: My Girl combined several standard K-drama plots with some refreshing twists, and lots of funny bits. Yoo Rin (Da Hae Lee) is a tour guide on Jeju Island who speaks multiple languages and is a bright and upbeat young lady, a natural beauty. Unfortunately, her family has always been in debt, running from the bill collectors; her only living relative, her father, is a gambler who ends up disappearing for long stretches, causing the loan sharks to go after Yoo Rin instead for the unpaid debts her father took on. By chance she runs into a man - literally - on an airplane, named Gong Chan (Dong Wook Lee), while trying to delay a plane's takeoff so that all of her tour group can make the flight. She manages to do this by pretending she has a critical illness and has to say one last goodbye to her boyfriend. The flight attendants pity her and let her on the plane. Guess who she picks on to be that "boyfriend"? Gong Chan sees right through her and tries to pry her hands loose from him with a ballpoint pen. The tour group get on the plane and suddenly Yoo Rin is miraculously cured!

Gong Chan, who is the wealthy (of course!), unattached heir to a large hotel company (of course!), is a rather sad, quiet type who rarely smiles and doesn't have any fun because he is overwhelmed with business and family responsibilities. Having lost both his parents two years earlier, he is devoted to what remains of his family, particularly his ailing grandfather named Seol Woong (veteran actor of many dramas Byun Hee Bong) who seems to be on his deathbed. Grandpa suffers from guilt after cutting off his only daughter years ago after disapproving of her marriage to a Japanese man, and especially since soon afterward he lost touch with her and she and her husband were killed in a car crash, leaving behind a little daughter. For years Grandpa has wished to track down this little girl, who would be Gong Chan's cousin, who apparently was adopted by a family they cannot trace. Gong Chan desperately wants to find this girl so his grandfather can die in peace after making financial restitution to her, but so far all he hits are dead ends, even after hiring expensive detectives. 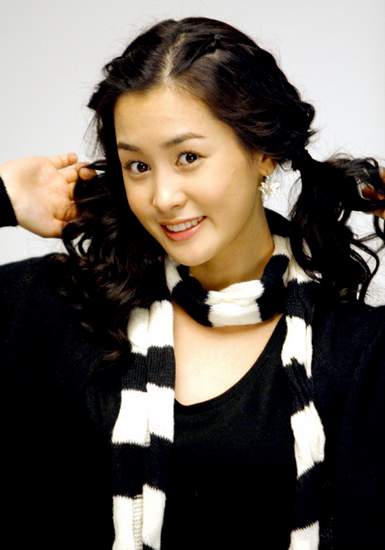 Da Hae Lee had me in STITCHES
through most of this show!


While both are on Jeju Island, Gong Chan and Yoo Rin meet up again by accident, after he nearly runs over Yoo Rin with his car as she escaped from loan sharks yet again. He doesn't recognize her at first as the lady on the plane and he takes her to the hospital to be checked out; Yoo Rin pretends to be hurt, hoping to get some cash for her "emotional distress", but she has no luck because the loan sharks even invade the hospital and disrupt it looking for her. Some of the funniest scenes I've ever witnessed in any K-drama take place as Yoo Rin tries all different disguises to evade the loan sharks to get out of the hospital safely. I just doubled over laughing!


Eventually she does manage to escape the hospital and goes to Gong Chan's apartment upon invitation so she can get her purse and other belongings back from him. She hands him her business card; he notices that she speaks Chinese, and asks her if she would act as a tour guide for his business interests because a group of Chinese investors are coming that evening and he has lost his previous translator. She does an excellent job and the Chinese men adore her! (Can't blame them!). When they leave, Yoo Rin, having nowhere to go, sneaks into Dong Chan's guest house for a couple of days to sleep on the comfy bed. During the day she picks tangerines from his orchard and sells them on the street to make money. Eventually Dong Chan finds her out and she tearfully returns all the money to him, to avoid his calling the police for her theft. Even though she was in the wrong there was something just a bit disturbing about a filthy rich guy not helping a destitute girl on the run from men who would attack her. Even Dong Chan seems to feel this eventually and hires her permanently as a tour guide for his business due to her language skills (she had learned multiple languages due to her gambling father fleeing from country to country to escape the loan sharks). 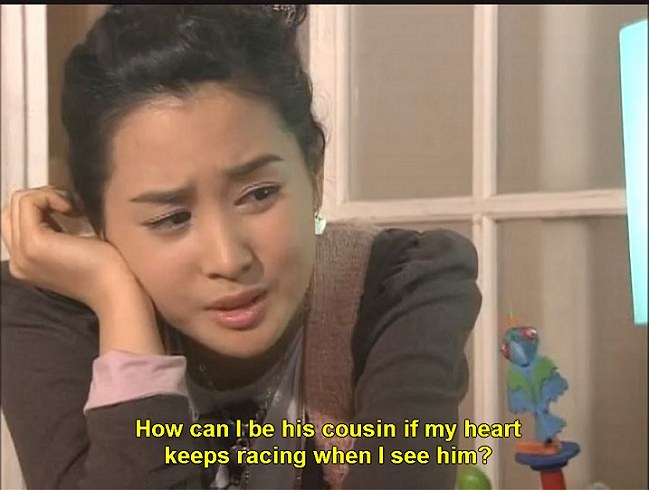 Dong Chan's grandfather is getting worse by the day, and not being able to find the long lost cousin weighs on Gong Chan deeply. He asks Yoo Rin to pretend to be that lost cousin. After she says "no, I can't lie to a dying man", Dong Chan offers to pay off all her and her father's debts to the loan sharks. This is something Yoo Rin just can't resist and she eventually assents to his proposal. After Yoo Rin moves in with the family, which brings Grandpa great joy and helps in his recovery process, Gong Chan finds himself drawn to her, and a forbidden attraction springs up between them. They know they aren't related by blood, but no one else does -- at first! 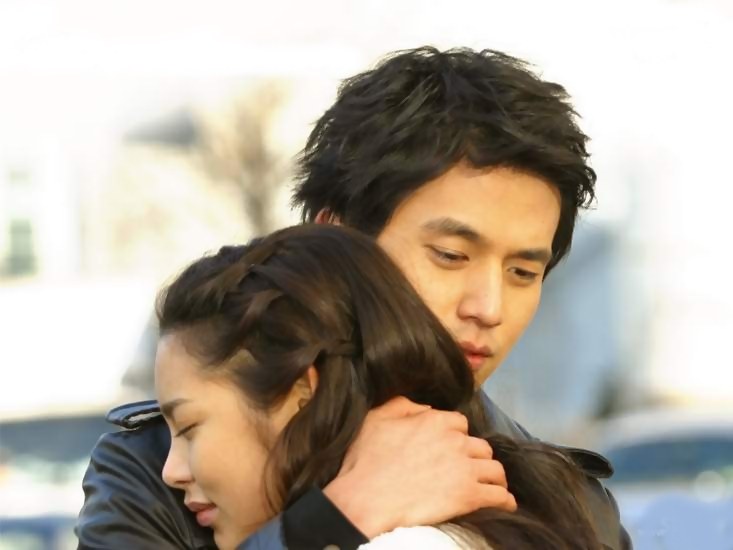 Meanwhile, Gong Chan's childhood friend, Jung Woo (an early long-haired Jung Ki Lee from Two Weeks), falls in love with Yoo Rin after he helped her evade the loan sharks several times earlier and became friendly with her, and around the same time Gong Chan's old girlfriend Seo Hyun (Park Si Yeon from The Greatest Marriage), a professional tennis player, has come back into his life after two years, wanting to pick up where they left off. Further complicating things, Yoo Rin starts falling for Gong Chan for real - but now because she's posed as his cousin, it's a love that can never be. Should Yoo Rin accept Jung Woo's sincere love for her, even though she just thinks of him as a friend, or should she risk a tumultuous love affair with her "cousin" Gong Chan, which could shake the foundation of everyone's lives? 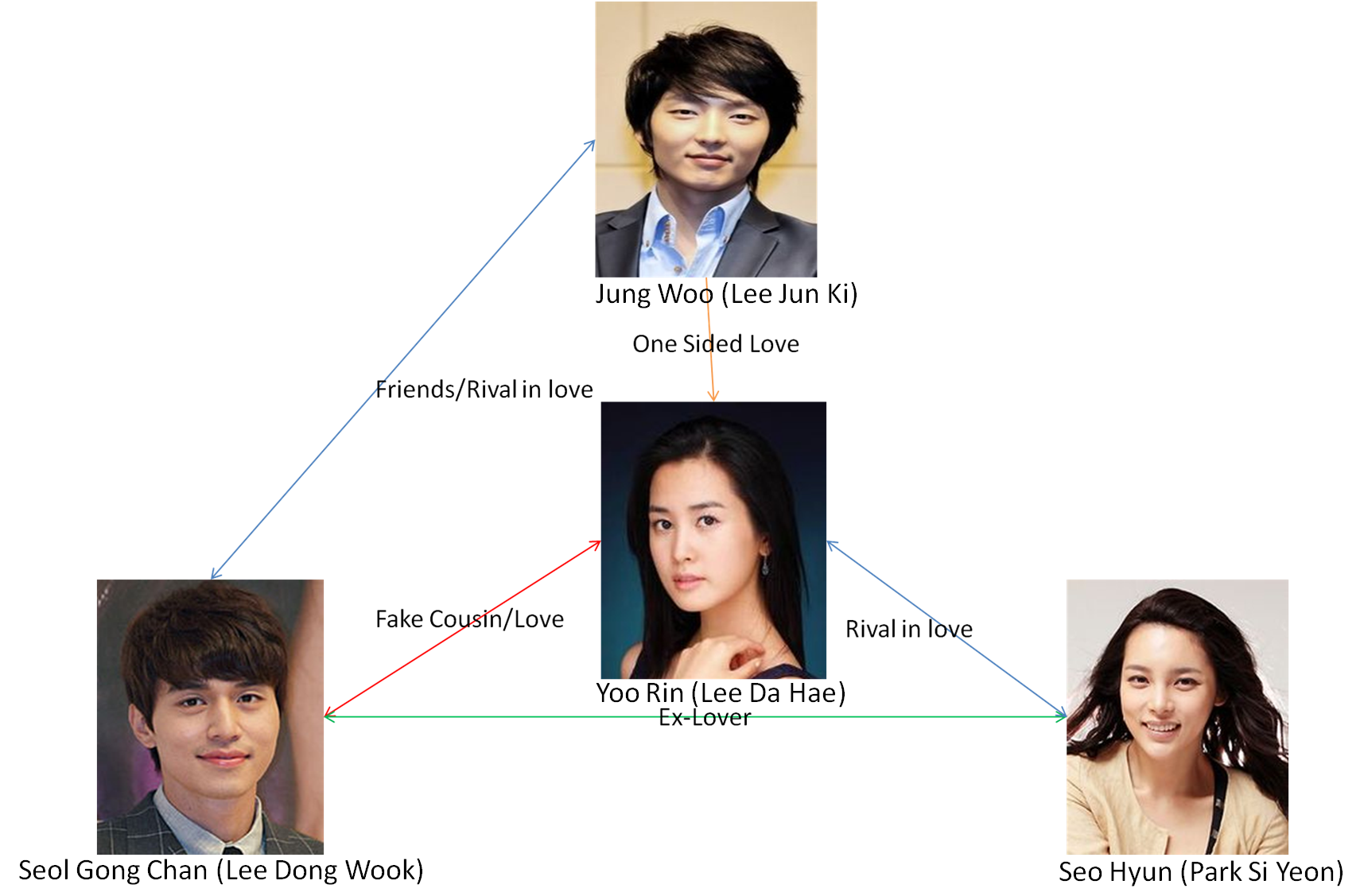 The basic building blocks of the majority of Korean romance stories: the quadrangle!


Every episode is riddled with fast paced hilarity, most stemming from Yoo Rin's peculiar imagination and her spunky personality. One of my favorite scenes includes her and Gong Chan on their way to check up on a man she's convinced is going to blow up the luxury hotel Gong Chan owns. She imagines them as different characters from various action films. It's great fun to watch! Or when Yoo Rin, having been taught by her father to play pool effortlessly, shocks a group of men with her playing prowess, using unique and funny moves to get the balls in the holes, causing their mouths to drop open in surprise. Yoo Rin is someone everyone would love to have around. She's a fantastic pick-me-upper. I have a feeling I am going to be returning to this drama to re-watch the merriment over and over again! I should also add that the elders in Dong Chan's family also bring lots of humor too, especially Dong Chan's artist, sex-starved middle aged spinster aunt who has a secret crush on a carpenter. I thought it was hilarious the piece they chose to highlight this couple's fascination with one another: I Will Wait For You from the French classic film musical The Umbrellas of Cherboug. I will never be able to hear this musical piece again without thinking of this wacky couple! 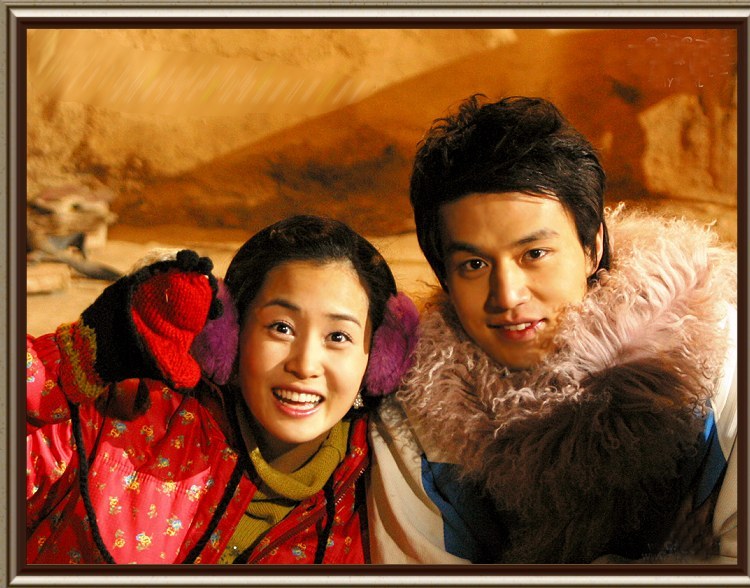 As it nears the end of the drama the scenes become more serious; what will happen when Grandpa, who has recovered from his deathbed, finds out the truth about Yoo Rin? The Hong Sisters don't make the ending transparent or easy to guess, but I will admit that the longer the show goes on the lovelier it gets, especially the true love between Dong Chan and Yoo Rin. Will there be redemption and forgiveness at the end, or will the elders digs in their heels and refuse to accept the inevitable? You'll have to tune in to see for yourself!

Besides all the great acting I really enjoyed the OST for this show; many times they used variations of classical music pieces but added crazy interpretations to them. Even Yoo RIn's cellphone plays classical music as a ringtone. I'm not sure whether they were making fun of more highbrow Korean dramas by doing this, but if so it was a brilliant touch. These loony scenes would be going on and warped classical tunes would make the scenes funnier somehow.

If you love these actors, or the Hong Sisters' work, please don't miss out on this refreshing classic Korean drama - romantic comedy. My Girl Rules! No need for a laugh track in this show! You'll bring your own! 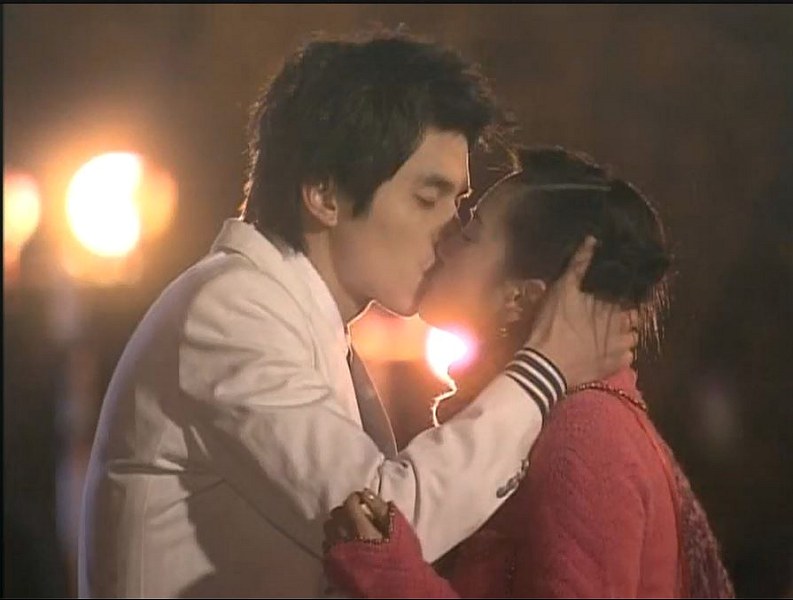 Who says the older, classic shows don't have hot kisses .....