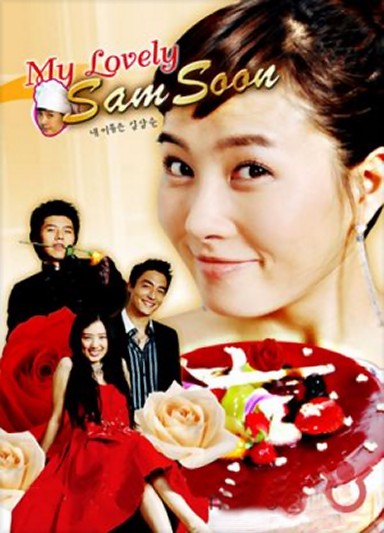 Actress Sun Ah Kim is a larger than life, naturally funny personality - the Korean equivalent of a Carol Burnett in the US - and she was largely responsible for the stunning ratings this Korean romantic comedy - drama, My Lovely Sam Soon, received when it aired in 2005, close to 40% viewing shares, when the typical Korean drama averages only 5% to 10%, with 20% considered something to celebrate. She deliberately gained fifteen pounds for the role so she would look chubby since that fit the character she was playing. (She certainly lost it for her next most popular drama, Scent Of A Woman, in 2011; she looked svelte in that show). I think the main reason the ratings were so high, apart from her wonderful performance (and the presence of the two hunky male leads Hyun Bin and Daniel Henney), is that the majority of adult women, who are NOT a ridiculously abnormal size two, can identify with a full figured heroine. Do only skinny women deserve to be loved and romanced? My Lovely Sam Soon proves otherwise.

The Story: When we first meet Sam Soon Kim (her old fashioned name means 30 in Korean, which is the age her character is) she is being dumped by her cheating boyfriend Hyun Woo Min (Kyu Han Lee) in a hotel dining room. At a nearby table watching them breaking up is the restaurant manager and hotelier Jin-heon Hyun (Hyun Bin from Secret Garden) who finds it all quite amusing ... until he happens to enter the men's restroom later and hears a woman sobbing in one of the toilet stalls. He knocks and knocks and she keeps saying it's occupied but he doesn't give up ... until Sam Soon finally opens the bathroom stall door and peers up at him, with mascara running down her cheeks. She had been so distraught she hadn't realized she had entered the mens' bathroom and not the ladies'.

Sam Soon is a hard working and talented pastry chef who had saved up enough money to go to France and train in one of the best schools in Paris. It just happens that the very same luxury hotel Jin-heon works in is in need of a pastry chef for their restaurant called Bon Appetit, and she applies for the job. She brings a mango cake with her as evidence of her culinary talents but it is rejected and handed back to her; however, through a series of funny events it ends up all over Jin-heon's face, who decides he likes the taste, so he runs after her as she hails a taxi, jumps in with her, and hands her his business card. She is offered the job by Jin-heon but she says she will take it only on one condition, if the name everyone at the restaurant calls her by is Hee-jin and NOT her real name Sam Soon, which she does not care for. Jin-heon looks shocked at this request - and even a little sad - we are to find out why later on in the drama. He ultimately agrees and she is hired on a trial basis. She is quickly respected by kitchen staff who can't help but notice her special baking and cake decorating talents while on the job.

At first Sam Soon's and Jin-heon's relationship is very testy and filled with verbal insults, although Jin-heon seems to grudgingly admire her honesty. For whatever reason he seems to feel some kind of responsibility over her and curiously follows her around and even rescues her when she gets sloshed drunk and throws up on him! She fights with a poor self-image, he fights with inner turmoils he doesn't explain to her for quite some time.

Jin-heon's mother Hyun Sook Na (Moon-hee Na) is a forceful woman who really wants to retire from the hotel business and hand everything over to her 27 year old son; she keeps pestering him to get married so he will have stability in his life and provide a nice home life and mother figure for his young niece Mi-joo (Ji Hee Seo), who was traumatized by her parents' deaths in a car crash in which Jin-heon was the driver at the wheel. The little tyke hasn't spoken a word since their loss. Jin-heon introduces Sam Soon to the little girl and they hit it off, baking all kinds of goodies in the kitchen together. Jin-heon begins to secretly admire some of Sam Soon's strong personality traits, though he would never admit it to himself. They start to spend more time together as friends, they even play the piano together. She makes him laugh, something he hasn't had in his life for years. Since he makes fun of her old fashioned name Sam Sook she uses an old-fashioned pet name for him, Sam-shik.

When Sam Soon, along with her sister Yi-young Kim (Ah Hyun Lee), find themselves in financial difficulty in trying to prevent the foreclosure of their parents' home, Jin-heon suggests a deal: he will pay Sam Soon $50,000 if she will pretend to be his girlfriend, which will keep his mother from meddling into his romantic life. He says one of the stipulations in their contract will be that they never fall in love with each other. "I'm not attracted to you, and you aren't attracted to me," he says, "so we will be safe." Sam Soon agrees, but of course life doesn't always turn out as planned, and the more they spend time with one another the closer they become and romantic feelings begin to blossom. They even meet up in beautiful Jeju Island together, where Jin-heon finally confesses to Sam Soon that he killed his own brother and sister-in-law in a car accident, a tragedy that has taken him years to heal from. She comforts him and they become even closer.


Then Jin-heon's old girlfriend - with the name Sam Soon likes for herself - Hee-jin Yoo (Ryeo-won Jung) - returns into his life. She had left him right after the car accident and gone to America, but he was never told why, and resented her leaving him during a crucial time in his life. Turns out she had had stomach cancer and didn't want to burden him with that while he was trying to recuperate from the accident. She had gone to seek the best medical care possible. Quickly following her is her dreamily handsome oncologist, Dr. Henry Kim (American-Korean actor Daniel Henney, in his first real acting role), who is in love with her and comes to Korea to find his mother's roots, as well as hoping that Hee-jin will fall for him. They have a very solid relationship together, but once Jin-heon is back in the picture, with all their unresolved issues, everyone's relationships become far more complicated. Eventually Jin-heon finds out about her cancer and out of pity, which he thinks is love, he suggests they get back together as a romantic couple, which throws Sam Soon for a loop because by now she really is in love with Jin-heon and even summons up the courage to tell him to his face.

Sam Soon resigns from Bon Appetit, much to Jin-heon's dismay. Although on the surface he seems happy with Hee-jin it's really all a facade. He misses Sam Soon, and even tries to interfere when she seems to be considering going back to her old boyfriend, or when she is on blind dates with other men. Hee-jin seems oblivious to all this, and still keeps Dr. Henry as a friend. Eventually however Jin-heon can't keep up his pretenses anymore: the relationship with Hee-jin has really been over for years, and pity and old regrets aren't enough to keep a couple together. People have to move on with their lives, not live in the past. Sam Soon was making great strides in this area, opening her own little bakery with her sister who had received money as the result of a divorce settlement.

Jin-heon finally confesses to Sam Soon that he loves her, and breaks up with Hee-jin. However Hee-jin asks one more request of Jin-heon: that he would accompany her to America for one week as closure to their long relationship and so that she can tell her supportive parents in the States that their relationship is over. Sam Soon graciously agrees that that is okay, feeling confident that Jin-heon truly loves her, but then Jin-heon doesn't return after a week, in fact many weeks go by where she doesn't hear from him and she has no clue why. 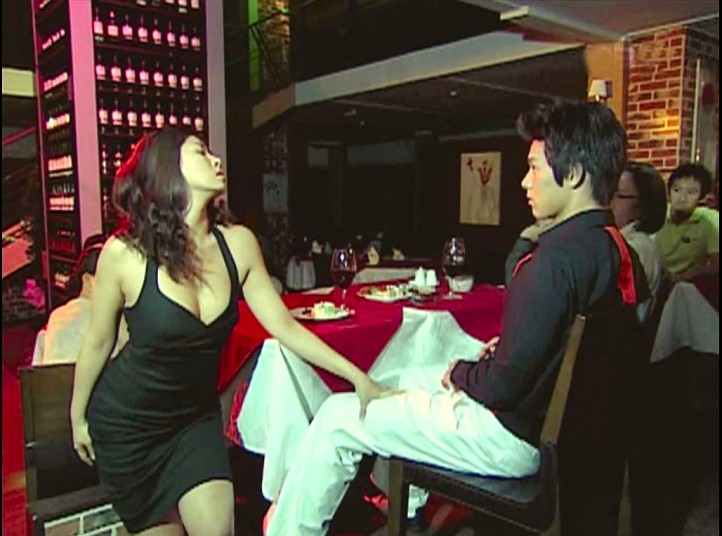 Sam Soon has developed so much confidence in herself now that she simply accepts the situation as it is and moves on; she even tears up the government document she had submitted to change her name to Hee-jin. She decides her name Sam Soon is perfect for whom she is now as a person. She reads a plaque at a bus stop which resonates with her: "Dance like no one is watching. Sing like no one's listening. Work like you don't need the money. Love like you've never been hurt before. Live like there's no tomorrow." She chooses this as her life's philosophy ... and then Jin-heon comes back! There's a good reason he hadn't been able to contact her while he was gone, which is revealed toward the end of the show. 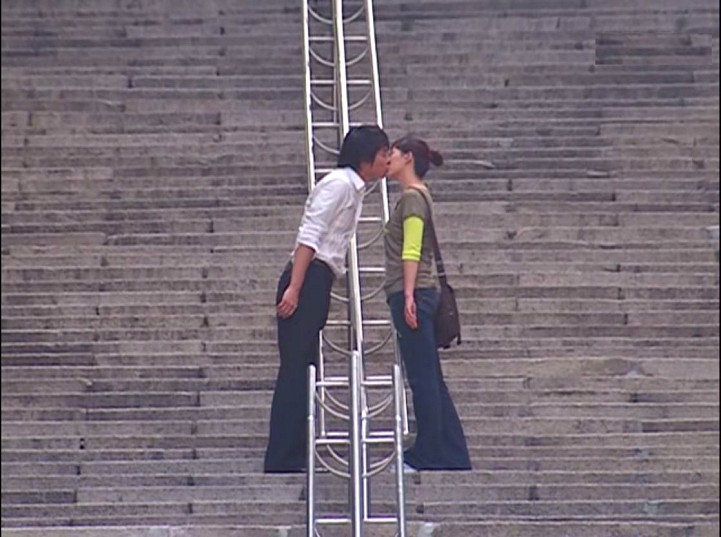 This is truly a sparkling, fun romantic confection and you will definitely enjoy it. It has a snappy, fun music soundtrack as well. It is one of the few classic shows that is quite frank about sex, compared to other Korean dramas of the time, but that actually makes it feel more realistic and more modern. I would suggest the best way to see it is buying the DVD boxset on Amazon (it was filmed in 1080p, so will look great on a big TV).

It will have you smiling and laughing like there's no tomorrow, and what does the scripture say about laughter? "Laughter makes the heart merry like a medicine." It's good for you, so go ahead and laugh!