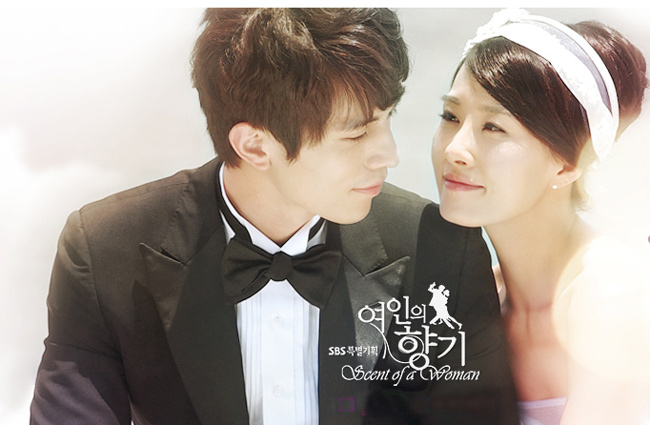 I first watched the Korean romantic melodrama Scent of a Woman (2011) in late 2011 on Streaming Netflix with a friend, and then re-watched it by myself in early 2014, so some time had passed between viewings and I was ready to re-affirm how much I had liked it the first time. I fell in love with it even more the second time around! This is an incredibly powerful, magnetic, beautiful drama and sensual love story that you don't see everyday, one that is unforgettable and timeless, especially for people like me who have been through a cancer battle.

The Story: For the woman in this drama, Yeon Jae Lee (stunning actress Sun Ah Kim from the famous K-drama My Lovely Sam Soon), her cancer diagnosis did not define her life but instead gave her the courage to finally live a full life and fulfill all her hidden dreams and desires in a written "bucket list", a list of things she wanted to experience before she passed on. However the emphasis is not on her illness or even the outcome, but on her growing inner strength and tenacity, which then shines forth from her formerly mousy face and makes it glowingly beautiful. She puts away the dull, monotonous, safe little life she had been living and reaches for happiness with every ounce of her being. It was so inspiring!


There are definitely some feminist overtones here: for instance, she had been receiving sexual taunts from her boss Sang Shik Noh (Jung Geun Shin) for a long time, but chose to put up with it, but after being diagnosed as terminal she finally had the courage to accuse him publicly and demand that he stop. She quits her office job and takes the $30,000 in her bank account, gets her hair done, buys a new wardrobe, and goes on vacation to an exotic beachside resort in Japan, the first time she had ever left Korea in her life. There she meets the love of her life, Ji Wook Kang (handsome Dong Wook Lee), the son of the president of her former company, who was there on a trip too.

Yeon Jae, now a transformed woman who looks like a model, boldly follows him around and strikes up conversations with him and he becomes intrigued with her. She chooses not to tell him she has cancer, since she never expects their relationship to last, nor does she seem to care too much that he has a beautiful fiance back home, Se Kyung Im (Hyo Rin Seo from That Winter, The Wind Blows), who might just be jealous that he seems to be falling in love with another woman. Yeon Jae is all too aware that the engagement is tenuous at best, and in reality merely a business arrangement. Se Kyung even shows up in Japan at the resort to see Ji Wook and finds him deeply involved with this other woman, but unlike her fiance, she recognizes Yeon Jae as a former worker at his company and tells her to leave him alone. Ooops! too late, Se Kyung, the match has been struck and the principal players are about to throw gasoline on the flame to create an explosion! 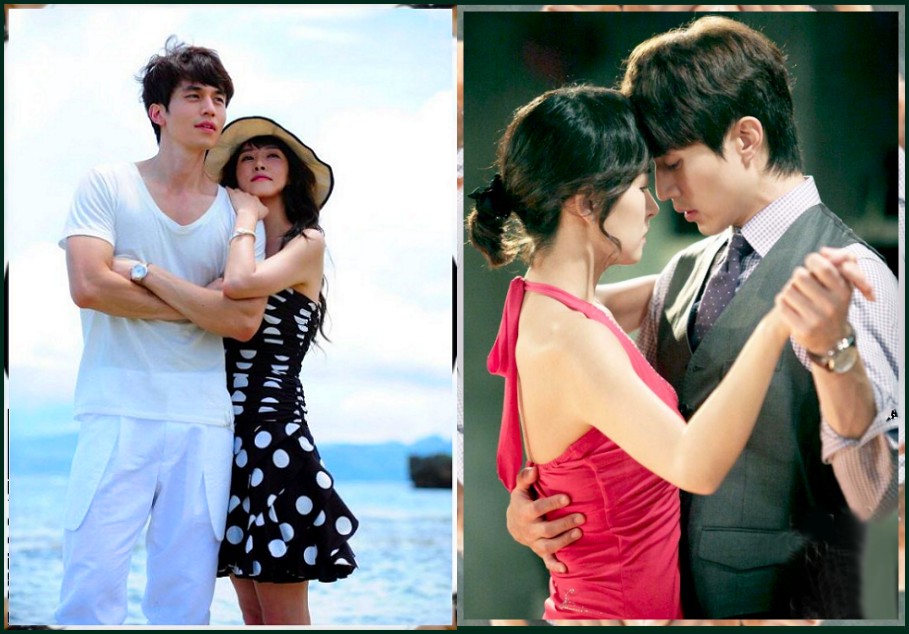 Once back home Yeon Jae continues to fulfill her bucket list, such as learning how to dance. She joins a class to learn Spanish style dancing and starts to show some talent for tango dancing. Her oncologist, Eun Suk Chae (sensitive actor Ki Joon Uhm from Dream High), who was her classmate in school and now her doctor, is secretly attracted to her and through the cancer treatments he gives her he grows closer to her emotionally. His boss at the hospital is well aware that this doctor has a poor bedside manner with patients and orders him to find something in his life outside of medicine to become good at, hoping it will humanize him. He decides to take the dancing classes with Yeon Jae, and they actually become pretty proficient together, and even dance together at a hospital benefit. 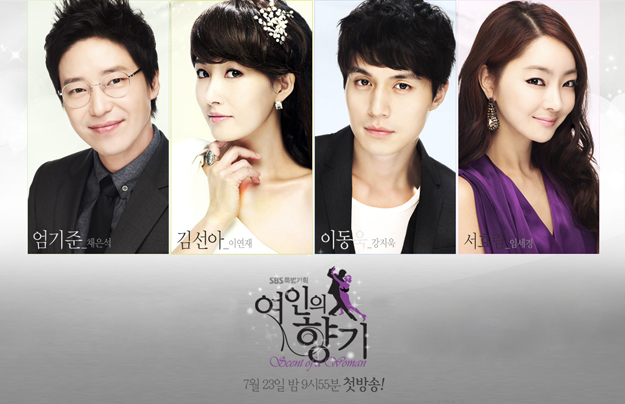 However Yeon Jae's romantic relationship with Ji Wook didn't end when they returned to Korea, and he too enrolls in the dancing classes, but with the ulterior motive of getting even closer to Yeon Jae. Meanwhile, Yeon Jae STILL doesn't tell Ji Wook the truth of what she is facing, although sometimes she does have trouble hiding the fact from him that she is in pain. When she tries to back off from Ji Wook, because she needs some space to breathe, he is having none of it. He marches into the dance school when Yeon Jae is alone practicing her dance steps and then one of the most memorable scenes in all K-drama history takes place, the tango dance to the song Santa Maria (episode eight of sixteen).


Regarding the whole cancer situation in this drama: there were some things that were not realistic, for instance, Yeon Jae didn't lose her hair while on chemo, but on the other hand she was choosing more minimally invasive treatments because her doctor told her she was terminal anyway; the idea was to prolong her life, not cure her, since there was no cure; so that might have been the main reason a person like Yeon Jae would not lose her hair.

Why Didn't You Tell Me? Scene


Although Scent Of A Woman is partly a show about illness, it is also a show about compassion, love, forgiveness, sensuality, ambition, friendship, honesty, and all those lovely intangibles people generally don't think about until they get sick and finally realize that each day we are given on earth is a gift, that there are no guarantees we will even be alive tomorrow. In that respect we are ALL terminal. The character of Yeon Jae understands this; she is so brave that even when she makes mistakes, like in prolonging telling her boyfriend or her mother Soon Jung Kim (nicely played by veteran actress Hye Ok Kim, who also played a great villainess in Bad Guy) about her cancer diagnosis, we can understand her logic behind her decision, and forgive her for it.

One of the most realistic scenes in the drama is when Ji Wook finally learns the truth: that the woman he loves is terminal. In many other K-dramas you'd probably see the lover or husband being totally understanding and supportive. But Ji Wook is ANGRY. Justifiably so, I thought. "Why did you make me care about you?" he cries out to her, as she stands there in tears, hooked up to her IV pole. "When did you know? Did you know when we were in Japan?" She answers in the affirmative. His mind cannot grasp that she never told him, never warned him. He walks away from her in tears, rejecting her. Yes, he was selfish, but he was HONEST. He would have possibly made another decision not to see her anymore if he knew right from the beginning that she was going to die. I thought that scene so remarkable. I could see people in "real life" feeling the same way Ji Wook felt. His feelings are not sugar-coated. He eventually does forgive her and goes back to her, and their relationship actually develops into a rock solid one by the end, but it's not a straight and narrow path to Happiness. 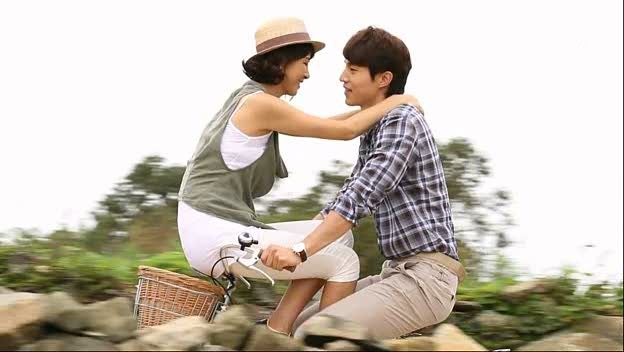 I really cannot adequately sum up my admiration for how the leads in this show portrayed their characters. The passion they brought to their roles was so real and palatable, it practically jumped off the screen at you. I also loved all the settings of the drama, and all the actors; even the bitchy fiance was somewhat sympathetic because she was so desperate. Once SHE learned Yeon Jae was dying she couldn't actively hate her any longer.

I loved the tango dancing and the entire music score of this show! Also a nice moment in the show was a guest appearance by the K-pop star Junso, who took Yeon Jae to dinner after she won a fan contest, and sang the title song "You Are So Beautiful" into her cell phone so that she could listen to him sing it to her whenever she wanted afterward. Ahhhhhhhh...................

Don't miss Scent Of A Woman. It's remarkable.


BUY SCENT OF A WOMAN ON AMAZON