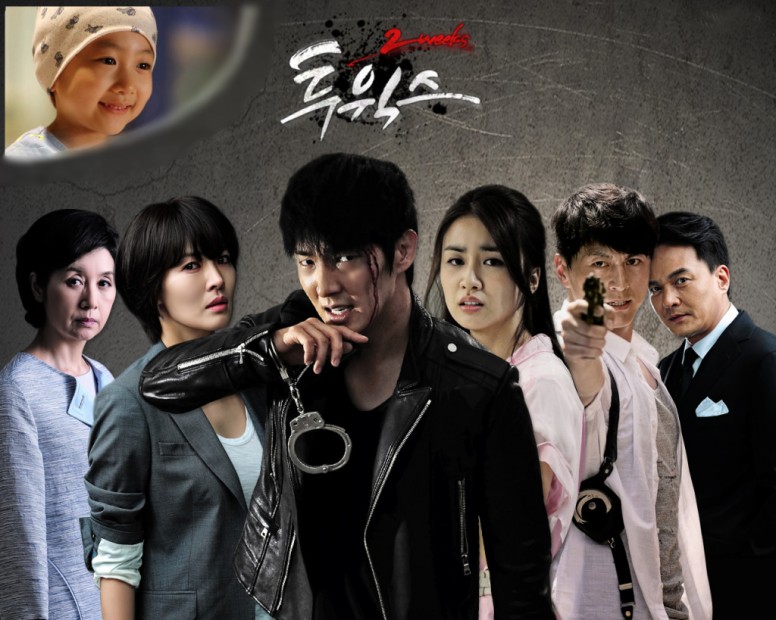 Extraordinary! Thrilling! Suspenseful! Brilliant! Whatever else you do in life, whatever else you watch in life, DO NOT MISS THIS EXCEPTIONAL KOREAN DRAMA, Two Weeks (2013). 2013 was the BEST year for Korean dramas, and I would put this drama near the TOP of 2013's offerings.

The cast is the best in the business, the story line is unique and compellingly real; it has no sappy romance to bog it down, but rather the story dwells on the deep and abiding love that develops between a father and the little daughter whom he didn't know he had. Under life-threatening conditions for both of them, their bonds grow so strong that they even meet on the Spiritual level and encourage one another through dreams. The little actress playing the daughter, who was only seven years old at the time this was filmed, basically STEALS the show away from all the fantastic actors, both the terrific leads,swiss replica watches the excellent secondary characters, the disgusting, murderous villain you will love to hate, and even the veteran character actors in smaller support roles. I've never seen a better, more appealing child actress in my life, outside of Shirley Temple. She is a little angel.

Two Weeks is completely addictive; you won't be able to tear yourself away once you've started it, so be warned! Set up a block of time when you have nothing else to do, for instance lounging around while you are on vacation, to be able to give this unforgettable Korean drama your undivided attention. You'll need it! You can purchase it on DVD at Amazon.

The Story: Versatile, endearing actor Joon Ki Lee (from the beautiful 2007 film Virgin Snow, which was the first time I laid eyes on Joon Ki Lee, and the drama Arang And The Magistrate) plays Tae San Jang, an ex-con pawnshop worker and part-time gigolo to wealthy older women, who suddenly is visited by an old flame, In Hye Seo (Ha Sun Park) who informs him that he is the biological father of her little girl named Soo Jin Seo (darling tiny actress Chae Mi Lee) and that their eight year old daughter is desperately in need of a bone marrow transplant in a few weeks' time, or she will die from leukemia.


In Hye deliberately had not told Tae San about giving birth to his baby all those years before because she didn't think he was mature enough to handle the responsibility (and for another reason I don't wish to reveal because it would be too much of a spoiler), and when she meets him again to ask him to get tested to see if he could be a donor match, she hasn't changed her mind about him. She is engaged to a leading detective at the city police department, Seung Woo Im (Soo Ryung Woo from My Princess), and the child and Seung Woo have bonded like father and daughter. She doesn't want that apple cart roughed up by Tae San entering their lives. 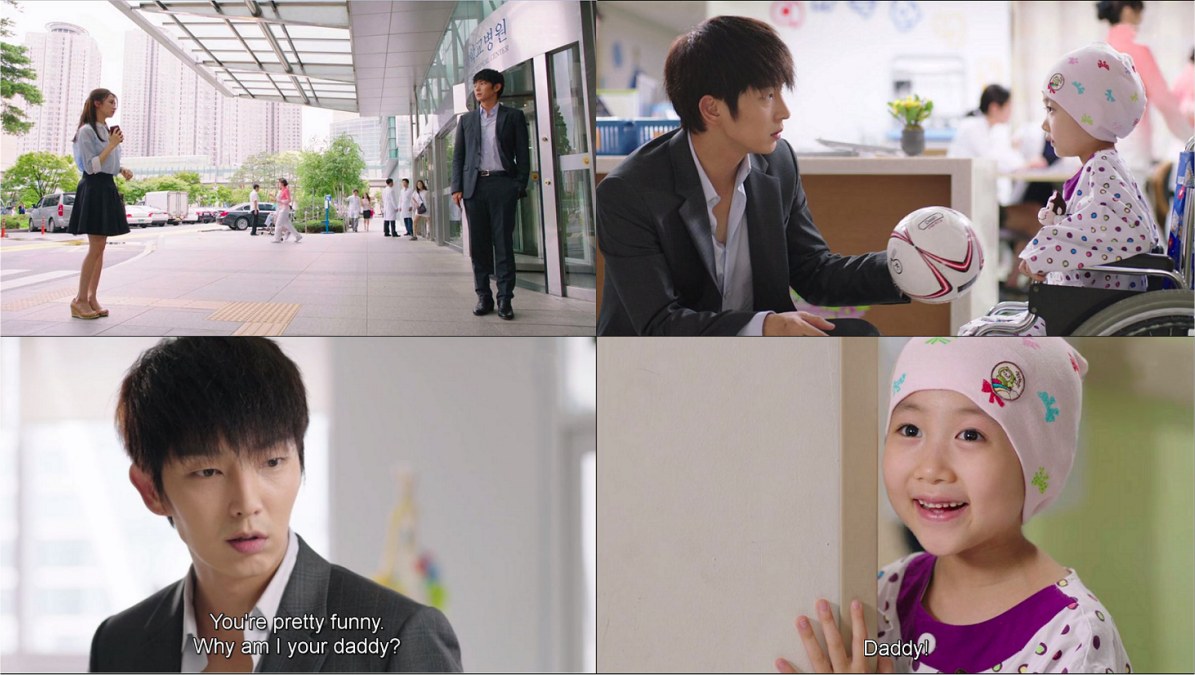 However, even though In Hye doesn't want Tae San to meet his little girl Soo Jin (she tells him she told the child he had died), after he donates his blood for the test he sneaks around the children's ward of the hospital hoping to see her, until a little girl in a wheelchair starts following him, insisting he is her daddy. Unbeknownst to either Tae San or In Hye, the little child had seen an old photo of when her parents were dating, and she recognizes her father and realizes that he is not dead after all.

My Favorite Scene In All K-Drama History!

A miracle occurs and Tae San's blood is a donor match for his daughter. He is told by the child's doctor that the bone marrow transplant will occur in two weeks' time. Tae San is so thrilled to be able to do something so special; for the first time in his life he feels his life has meaning. He gives up his gigolo ways. His excitement starts to melt the heart of In Hye a little bit, a good first start so that they might be able to get along better in future, and possibly even co-parent? However, the still-secretive In Hye doesn't inform her detective fiance Seung Woo that she has contacted the biological father of her little girl and asked him to be a donor; she simply tells him an anonymous donor was found. Lies are not good for the future of a relationship. (Hopefully there aren't any between these two actors in real life because after this drama was over they got married in real life!). 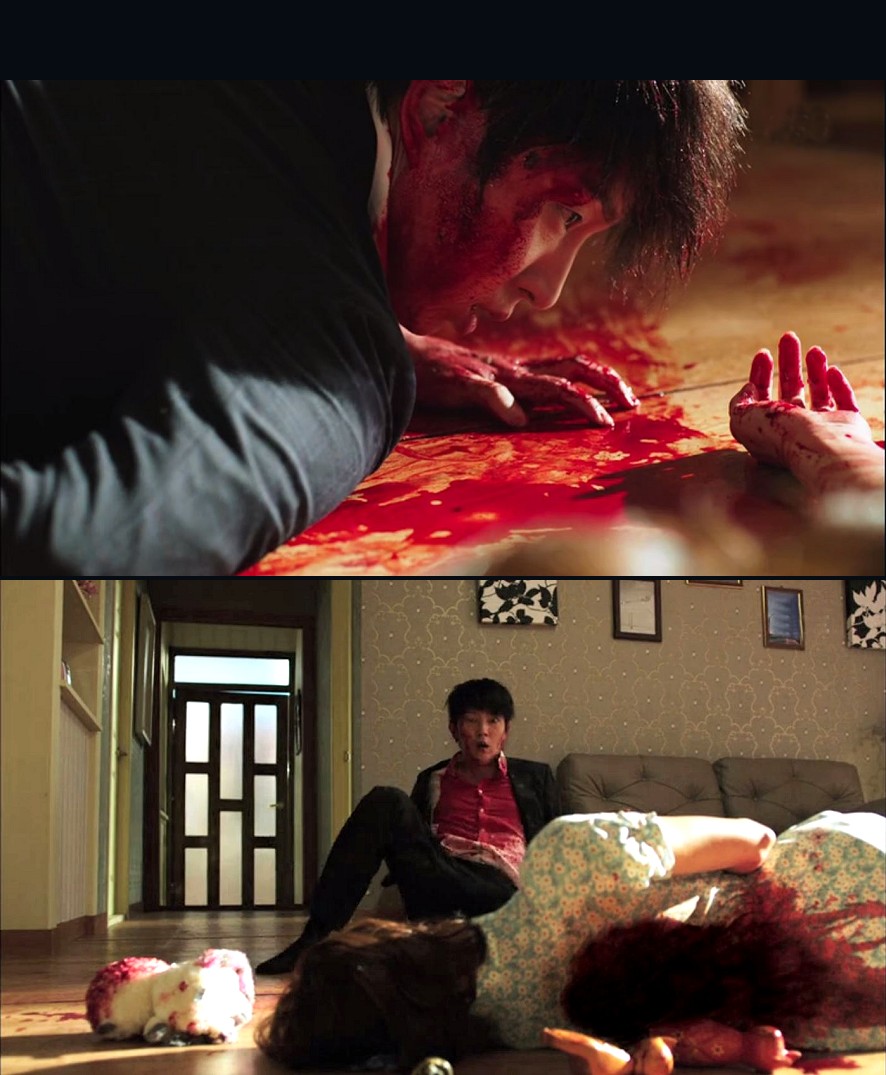 Then Tae San is wrongly arrested for a murder he didn't commit (he is framed by evil crime boss Il Suk Moon, chillingly played by actor Min Ki Jo). Seung Woo has to interrogate Tae San, but he has no idea of his relationship with his beloved In Hye or little Soo Jin. All the incriminating evidence points to Tae San as the murderer of this young woman named Ji Sook Park (Hy Seo Kim, in an outstanding performance by this lovely young lady), when he was actually friends with her instead and had tried to help her when she seemed to be in trouble. 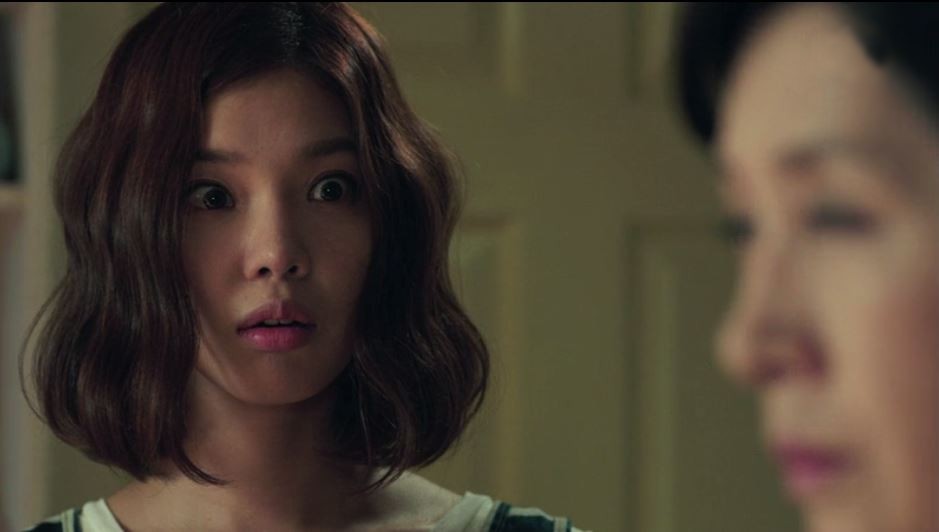 
Ji Sook was murdered because she was a covert plant by the police department to keep a personal eye on the crime boss Il Suk, and Il Suk personally stabbed her to death when he discovered what she was up to, setting it up to look like Tae San had done it. Ji Sook had willingly risked her life to get involved because she felt she owed it to her best friend, female detective Jae Kyung Park (fantastic Kim So Yeon of IRIS and I Need Romance 3).

When she frantically tried to communicate with Jae Kyung, to inform her she thought her life was in danger, Jae Kyung was on a short vacation. The guilt that Jae Kyung feels toward the murdered Ji Sook begins to consume her whole life, and she is also convinced, as well as Seung Woo, that Tae San must be the murderer. There is a crucial piece of evidence that could prove Tae San is NOT the murderer (and confirm that Il Suk the crime boss is the real murderer), but in an ironic twist it had been misplaced. Will it ever be uncovered?

When Tae San is being transferred to a different prison after his interrogation there is a bad road accident and Tae San is able to escape from the police van, grabbing a nearby motorcycle and taking off. His only concern now is to elude police for two weeks, until his daughter's bone marrow transplant operation can be completed. He is terrified that if he reveals to the police his true connection to his old girlfriend and his little daughter that the crime boss Il Suk will target them out of revenge. 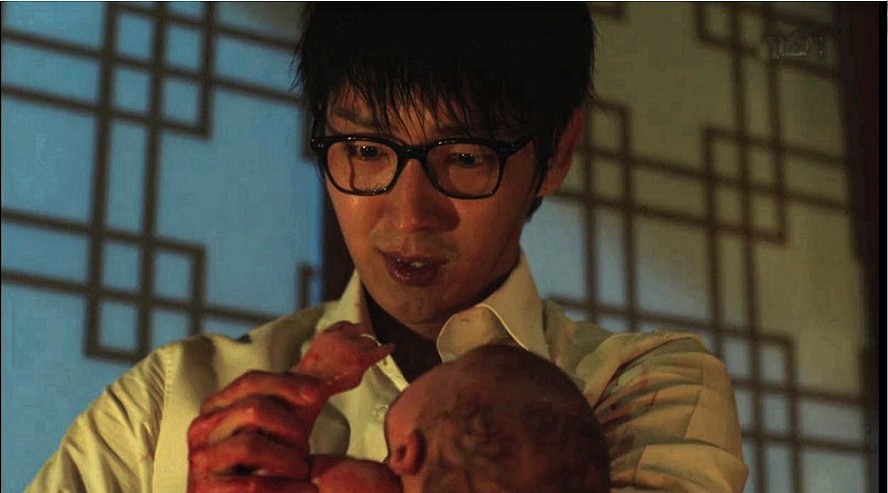 Tae San undergoes one crisis after another in trying to elude police for two weeks. Some people he meets along the way, even knowing who he is because of a nationwide manhunt, sympathize with him and keep mum about his varying locations to the police. Inexplicably, many seem to sense he is innocent. One especially memorable event occurs when Tae San helps deliver a baby for the wife of a soldier who is away serving his country. No one else is around to help her and she is in heavy labor. When she gives birth and he holds the infant in his arms he begins to realize all that he had missed in his life by being denied access to his beautiful daughter for eight years, and he weeps, staying with the mom until she can recover, and then he is off once again when the police begin to search the area for him. 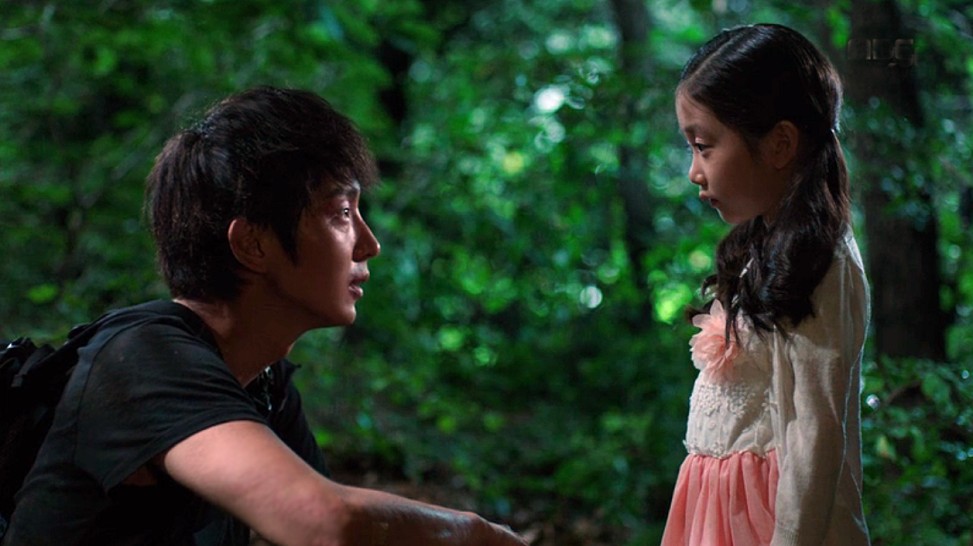 Into Tae San's dreams comes his daughter Soo Jin,
who sometimes gives him clues about what to do next

While Tae San is on the run, whenever he can manage to get some sleep, he dreams of having conversations with his little girl. These are some of the most haunting and memorable scenes in the drama, and made me wipe away many a tear. He also discovers things about himself he never knew before. So even though Tae San is running, he is not running without purpose, and he is growing as a human being at every new turn, making new allies along the way.

Some of the veteran actors I delight in watching in show after show appear in smaller roles in Two Weeks, but still bring some added interest and sometimes levity to the various plot lines. Actors Ho Jin Chun (Doctor Stranger, City Hunter), Hyo Sup Hun (Doctor Stranger, In Soon Is Pretty, Gu Family Book), In Ki Jung (Glass Slippers, Doctor Stranger), all figure prominently in the story, thankfully - for the most part - playing good guys! I've really lost track of how many times I've seen them show up in the hundreds of K-dramas I've watched so far, but I always smile when I see them. 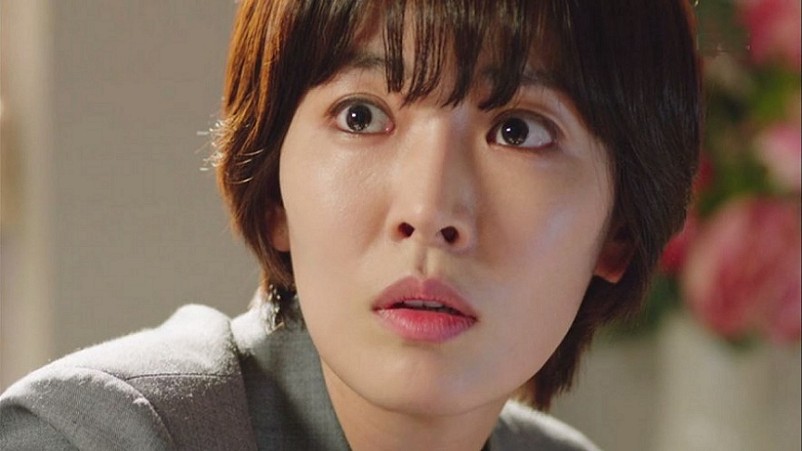 
Meanwhile some of the detectives are becoming aware through gathering evidence that Tae San might have been telling the truth about not being the murderer. Female detective Jae Kyung even begins to take his side against her male co-worker detective Seung Woo, who is also becoming more aware that his fiance In Hye might be hiding information from him. From public phones Tae San has been able to keep in contact once in awhile with In Hye, who is terrified that Tae San might not make it alive for the bone marrow transplant for their dying daughter. With each phone call Tae San and In Hye seem to trust one another more and more.

The nasty criminals: will they discover that crime doesn't pay?


We also follow crime boss Il Suk's growing hysteria that he will eventually be discovered to be the real murderer. He is in league with a female politician over a big illegal drug deal that is about to go down, using historical artifacts from China to hide the booty. The politician, Seo Hee Jo (fantastic veteran actress Hye Ok Kim from Bad Guy) threatens him that she will expose him, and he threatens her right back. Such a lovely "couple". Her main concern is getting the drug deal to go down smoothly so that she can pocket the wealth, retire from political life, and take care of her handicapped adult son. However the police are slowly sniffing the two of them out, and the drama goes into a frantic pace, with exciting twists and turns, to its dramatic conclusion.

Will the real criminals be caught? Will Tae San's name ever be cleared? Will he be able to save his daughter's life? Will the dramatic situation bring the parents of the little girl closer, or further apart? I won't reveal the ending but it's beautiful, beautiful, beautiful - and NOT what you would expect! I would LOVE to see a sequel because as soon as this show was over I missed it fiercely. The characters become so close to you, the audience -- especially that priceless little girl! -- that you feel like you know them personally. I loved this drama so much that I decided to purchase the DVDs at Amazon for posterity, for my own library, so that I could always have it on hand to watch again and again.

This is one of those exciting dramas that would never be the same if America tried to make it. All its strange spiritual beauty would be stripped out and we'd be left with a standard cops and supposed murderer chase. Korea KNOWS how to make an unforgettable drama, and Two Weeks is a primary example of how they do it. Don't miss it!