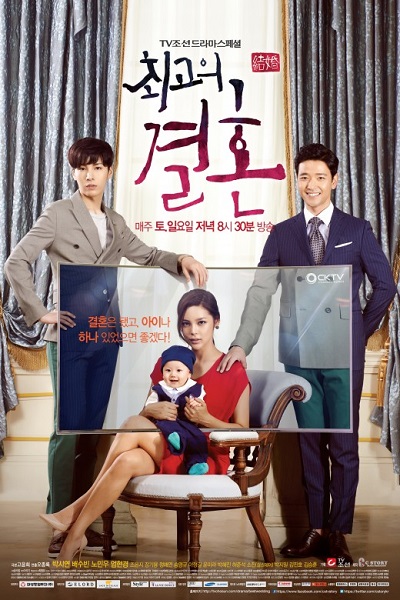 I am going to be honest: this drama The Greatest Marriage (2014), which has nothing to do with marriage, great or otherwise, will try your patience, but it's like watching a train wreck: you can't turn your eyes away; I actually tried to quit it several times but was not successful! I wanted to see if the train wreck would ever be cleaned up. It's hard, if not impossible, to sympathize with any of the characters here, who are all off the wall nut cases. The main female character, who is supposed to be a smart single career woman, a respected news anchor, lies to the nation when she gets pregnant out of wedlock, then allows herself to be treated like dirt by the two men in her life, who are selfish and bizarre in the extreme. Any normal woman would have run away from the whole situation and started her life anew somewhere else other than Korea, just to escape the influence of such toxic people upon her life. Just when you think there might be hope for some of the characters they regress again into old childish patterns. I got that the female writer was trying to show that Korea is behind the times for women's rights, but her script is so over the top that it lacked credibility. Being turned away from a birth clinic when about to give birth because you won't give the father's SS number, or having your child kidnapped and not immediately calling law enforcement? Biological "Dad" telling his kidnapped and distressed kid that his mom has died, a blatant lie, and then looking stony faced while the kid bursts into tears? Blackmailing your child's mother to sign a contract agreeing to become your mistress when you marry another woman, one you don't love, because she gets pregnant out of wedlock too? Hello? Is this The Twilight Zone? Start this perverted drama at the risk of your own mental health!

I will briefly describe it in more detail, if you can stand it, for it's down near the very bottom of my favorites list, along with bombs like Temptation and Killer Girl K. There are other side characters despite the main four leads, but I will only concentrate on the leads -- the side characters are just as bad as the lead characters. This show isn't worth a long review!

Ki Young Cha (actress Si Yeon Park - the real reason I even began this drama to begin with) is a popular and well-respected anchor woman for the nightly news. Her co-anchor is a male chauvinist named Eun Cha Jo (Bae Soo Bin) who hates feminists yet he has political aspirations that to achieve he has to at least pretend to favor women's rights. Ki Young grew up poor, her widowed mother owns a little take out restaurant outside of the big city. So everything she has achieved - nice apartment, nice clothes, nice car - has all been due to her own efforts to succeed. However, she is lonely, and so when the opportunity strikes she flirts a bit with a well known food writer named Tae Yeon Park (No Min Woo) with whom she is working on a book project, and one thing leads to another and they become sexually active with one another. She ends up pregnant and he pressures her to have an abortion (at which point I wrote off his character permanently as deserving any kind of a believable repentance or reformation - I was done with him at that moment), and even worse her flaky mother does the same, claiming she will ruin her life if she has a baby. "Abort my grandchild, I don't care!" TOXIC!

Ki Young breaks up with Tae Yeon and has to decide whether or not to have an abortion under such difficult circumstances. If she keeps the baby how will that help her career and her standing with the public? She's not married and apparently in Korea single mothers are still to this day scorned and avoided publicly, and their children are ridiculed growing up. (I don't know if this is really true anymore, but Korea is known as a rather strong patriarchal society, and abortion is illegal, though women still get them through private doctors). 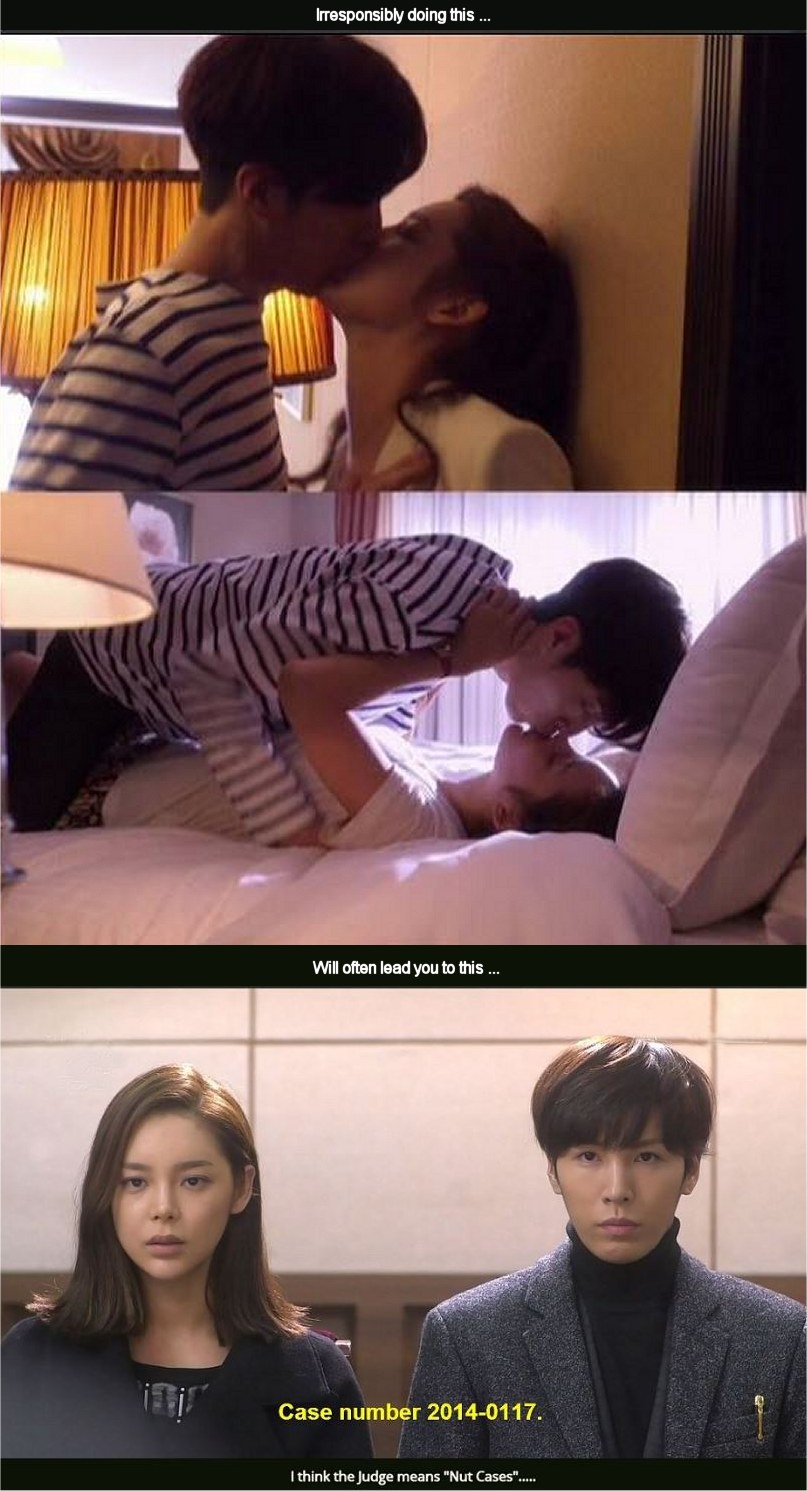 Ki Young decides to keep her baby after showing up for an abortion and then realizing it's the last thing she really wants to do. Her co-anchor Eun Cha, the chauvinist, finds out she is pregnant and also finds evidence who the father of the baby is. He is hoping to blackmail her so that she will leave her job as chief anchor and he can take over the job. He succeeds. She dramatically announces her pregnancy publicly in front of the cameras, states that she got pregnant through a sperm bank and doesn't know the baby's father. She steps down as anchor and Eun Cha fills the position, though the ratings at the station immediately start dropping. She works as a writer in a back office, where the other workers avoid her like the plague. She even has a miscarriage scare and for once in his pathetic life Eun Cha starts to show some humanity, taking her to a medical clinic and seeming to be excited to see the baby on the ultrasound. 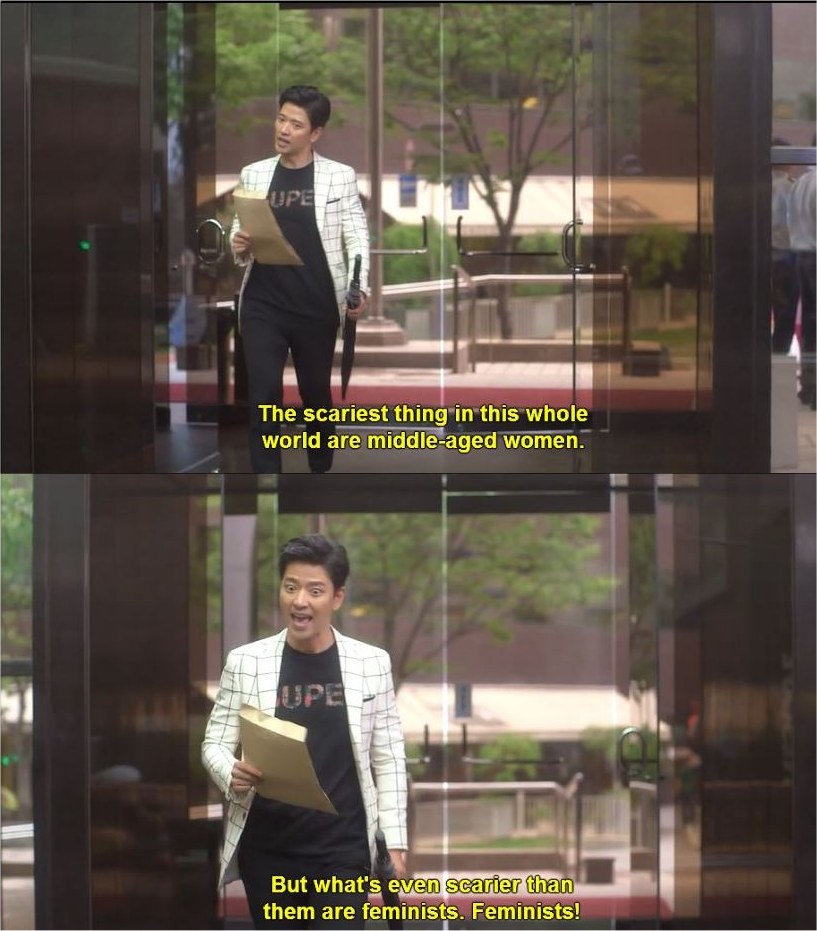 Meanwhile, Tae Young, on the rebound, gets physically involved with a woman at Ki Young's station named Myung Yu Hyun (Uhm Hyun Kyung) and SHE ends up pregnant too. She blackmails him into marriage, then promptly miscarries while Ki Young is giving birth at the same time! Tae Young is such a mental case mess he ends up dumping his wife on his wacko nutcase parents, who lead completely stifling lives due to their strict natures, and going on a trip around the world by himself! (His character irritated me the most of all -- I kept yelling at the screen: "ARE YOU A MAN OR A MOUSE???")

Ki Young has her baby boy and lives a very restricted life. Trouble begins anew when she has to sign the kid up for daycare and kindergarten and the other students make fun of him for not having a father. Against all of the logic of "real life" anchor Cha becomes a surrogate father to the boy, and even seems to care for him, but then he is blackmailed by the grandfather of the kid and agrees to assist in his kidnapping! How can you love a kid and assist in him being kidnapped from his mother, just because of political aspirations? If the mother ever finds out why would she have ANYTHING more to do with such a man? And yet Ki Young actually states, "I feel comfortable when I am with you." HUH???????? 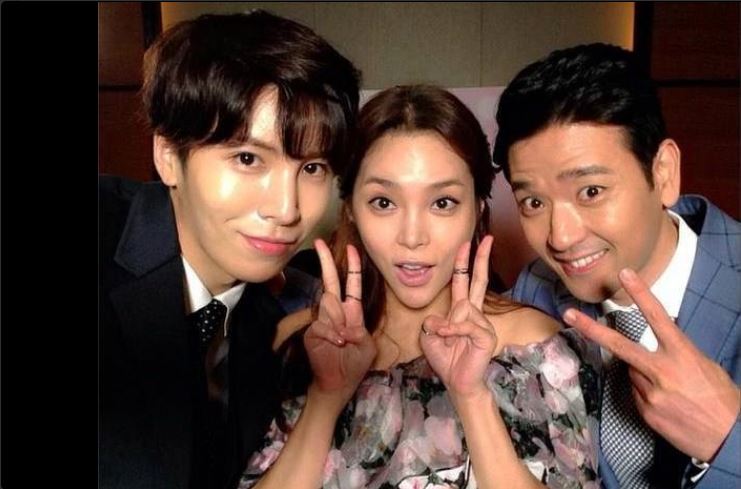 Calgon, take me away! How did you guys agree to do this trash?


Tae Young returns from his world trip a worse mental case than ever, having been kicked in the head by a wild boar on safari! HAHAHA! (what a garbage script!). So he tells his own kid his mother has died, because he is jealous when he sees Ki Young's closer relationship with anchor Cha. The child gets sick from grief. Despite not even loving his own kid, Tae Young takes Ki Young to court to try and obtain sole custody -- and he WINS!!!! (Hello? His family illegally KIDNAPPED the child from his mother! What kind of perverse judge would hand over sole custody of a young child raised 100% by his mother to the no-show "father" after his family had kidnapped him?). Even in a patriarchal society no judge in his right mind would ever do something like that. The best judge would have had Tae Young and his wacko family and wife arrested, and given sole and permanent custody of the child to his mother.

See what I meant earlier by The Twilight Zone? Although maybe I shouldn't insult Rod Serling's memory by comparing this trash to his great show.

To top everything off we get an even more unrealistic and nebulous ending where the writers leave it up to you to figure out what happens to all these characters - as if you care! Can this get any more insulting to any mind with an IQ higher than 50??? Saints preserve us, please stay away from this "drama". Thank you.


RETURN TO OTHER DRAMA REVIEWS