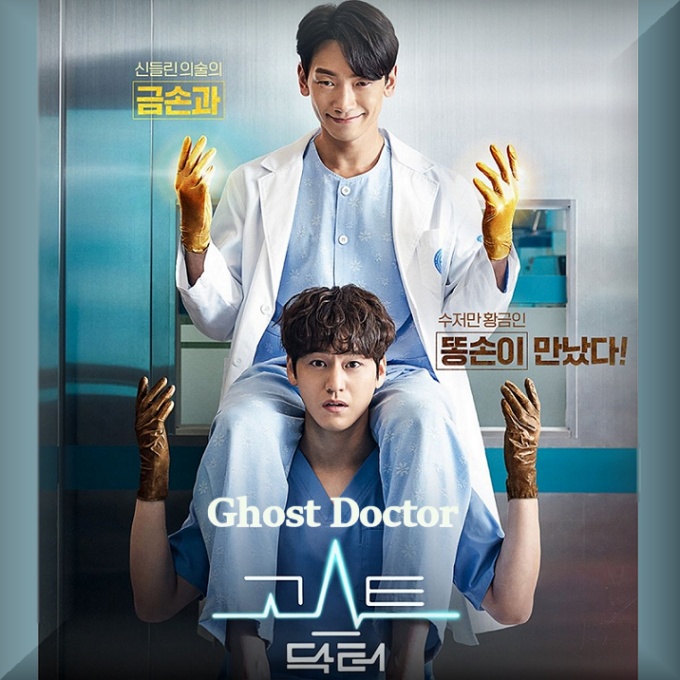 The always wonderful Rain and Kim Bum, both playing competitive doctors together, in a mostly lighthearted K-drama? How is that one to miss, even if you think the premise is silly because of a ghost angle thrown in? Uh uh! No way could I miss Ghost Doctor (2022), not for the world. None of the ghosts are even scary in this drama -- just like they weren't scary in Master's Sun. It was a brilliant idea to cast these two exceedingly handsome, talented actors together. (I've especially loved Rain for going on twenty years, my favorite work of his the brilliant sci fi film I'm A Cyborg, But That's Okay with Su Jeong Im, made in 2006). The bromance that developed slowly on screen between them in Ghost Doctor made for excellent entertainment, with many funny scenes. To be honest, however, sometimes the nitty-gritty of the actual writing of this medical drama made me roll my eyes and grin at its lack of realism ... for instance, in one scene a leading medical doctor at a hospital is dying and only three people are in the operating room to try and save his life, and the person who starts the emergency surgery is an inexperienced intern! LOL! I hope when my life is on the line I don't end up in a hospital as wacky as this one! Even IF the doctors look as handsome as these two fellows! :) 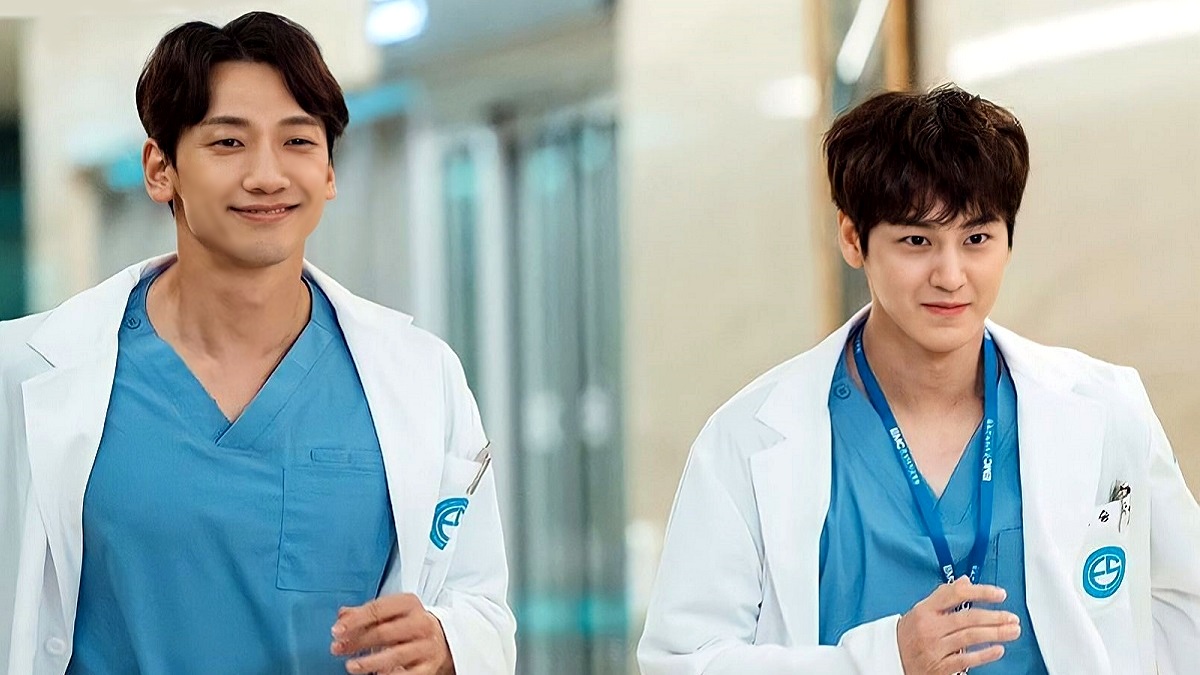 
The leading lady, UEE (You're Beautiful), has never been one of my top favorite Korean actresses, in fact I usually avoided her dramas, but I must admit she acquitted herself very well here, and even made me tear up for the first time while watching her playing sad scenes. She played a doctor too, and an ex-girlfriend of Rain's character, who has come back into his life to shake it up. 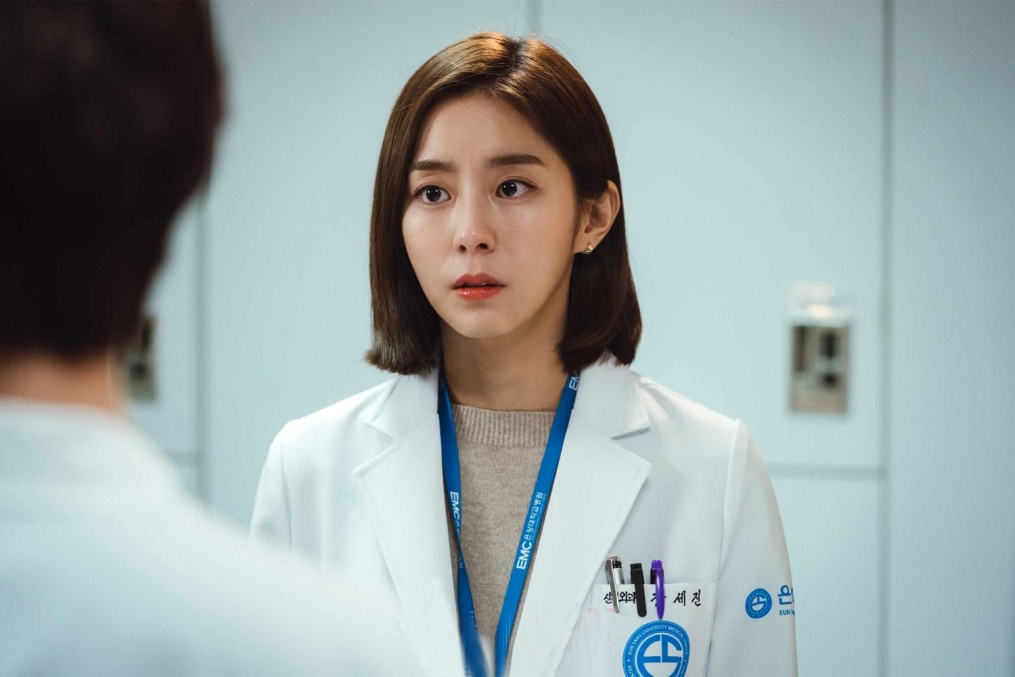 It was also delightful to see several familiar faces in the supporting cast, especially the sunbaes (seniors). I always grin when I see these genius actors in a cast list of a K-drama: the beyond fantastic Dong Il Sung (It's Okay, That's Love, My Girlfriend Is A Gumiho, Jirisan, etc.) and Park Chul Min (who played the unforgettably funny stuttering, coughing trumpet player in Beethoven Virus, an actor who has a resume a mile long, going back to 1996!). And as the villain we have the excellent Tae In Ho (Descendants Of The Sun, Fix You, Black Dog, Misaeng, etc.) who always makes you want to scratch his characters' eyes out! LOL!

We meet the stern and aloof head doctor at Eun Sang University Hospital, named Cha Young Min (Rain), and while he is an excellent technical doctor and surgeon, his bedside manner is atrocious. He rarely smiles, has no sense of humor, has no girlfriend or wife, and he seems to be going through the motions of medical diagnosis and possible cures for patients, instead of actually caring for them as human beings. He has cut himself off emotionally from everyone, and we begin to wonder why. He often yells at his co-workers, especially in the operating room, when a calm, cool head is required. Therefore, he alienates everyone around him, making harmony among hospital staff members and administrators impossible. In one case, especially, he makes an enemy out of the main hospital administrator Han Seung Won (Tae In Ho) who would like nothing better than to get rid of him for good, no matter what it takes. 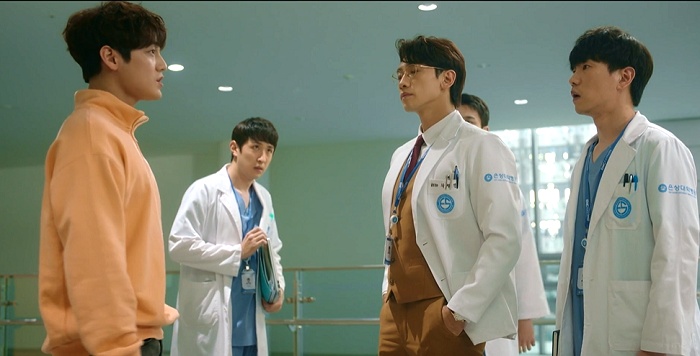 
Then an old ex-girlfriend named Jang Se Jin (UEE) re-enters his life after living in Miguk (America) for several years. Her father is sick and is now a patient at the hospital. Since she is a neurosurgeon she is hired by the hospital, and Young Min is forced to see her again pretty regularly; he seems to hold a grudge against her for some reason, and often looks at her with partly camouflaged hurt eyes. What happened between them? We aren't to learn the reasons for their breakup for quite some time. Brief flashbacks sometimes give us an inkling as to why they broke up, and show us that Young Min had not always been as stern a person as he is currently. 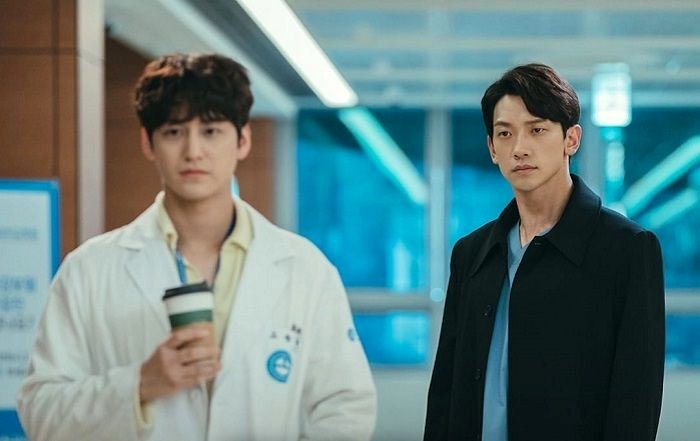 We also meet a resident intern surgeon named Go Seung Tak (Kim Bum), who is the exact opposite of Young Min. He is an easy-going worker at the hospital who cares about his patients. However, he is a doctor who could learn a lot technically from his superior at work, Young Min. Really the only reason he keeps a high profile at the hospital is because his grandfather is the founder of that hospital. He messes up on occasion personally and at work, and has to be reprimanded. Personal jealousies at this hospital among staff are quite frequently exposed.

One auspicious night Dr. Young Min is driving his car and a man on a motorcycle broadsides him: in the ensuing confusion on the street there is a second huge collision with a truck on the road and Young Min is knocked unconscious. Then, strangely, he seems to be able to exit his banged up car to check on the medical condition of the motorcyclist unconscious on the street, but none of the bystanders or emergency workers seem able to see or hear him. When he touches a paramedic his hand goes right through the man!


Young Min is shocked, and walks back to his car, only to see his own body still in the car, unconscious, leaning over the steering wheel and air bag that had burst open on impact. (This scene is so much like a scene from the brilliant classic Korean masterpiece 49 Days that I actually started laughing -- plagiarism, writer?). Young Min is rushed to his own hospital for treatment and is admitted as a patient in distress and in a resulting coma. Then the shocked coma spirit of Young Min somehow possesses the far more inexperienced resident doctor Go Seung Tak’s body ... suddenly gifting Seung Tak with extraordinary surgical abilities that he's never had before. Thus, this spirit of Young Min even manages to operate on himself, through Seung Tak's hands, shocking other staff members at his sudden brilliance! "Physician, heal thyself!" takes on a new meaning in this scenario. 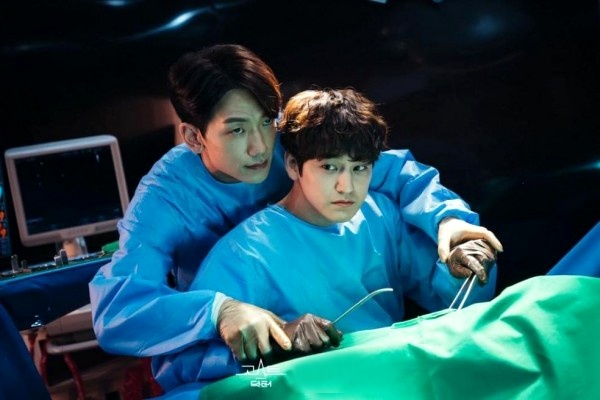 Of course Go Seung Tak becomes the main topic of conversation at the hospital for saving Young Min because no other doctor had happened to be around at the time. He relishes the attention. It is soon apparent he can see and talk to Young Min separate from his body. Another young emergency room intern named Oh Soo Jung (Son Naeun) thinks she can sense that something is not quite right with Seung Tak's sudden medical brilliance. Personally she believes in supernatural phenomena and begins to sense early on that something spiritual and mystical is going on in Seung Tak's life.

My Favorite OST Song: Fly Away


Seung Tak himself is shaken to his core upon meeting the coma spirit of his senior doctor at work. At first they have quite the tempestuous relationship, but as the days and weeks go on they begin to grow closer, almost to the point of friendship. We see Young Min soften a lot in his character, become more caring, and even feel closer to his ex-girlfriend because she had made his comatose body her own patient, moving him to a better room where she can take care of him one on one. 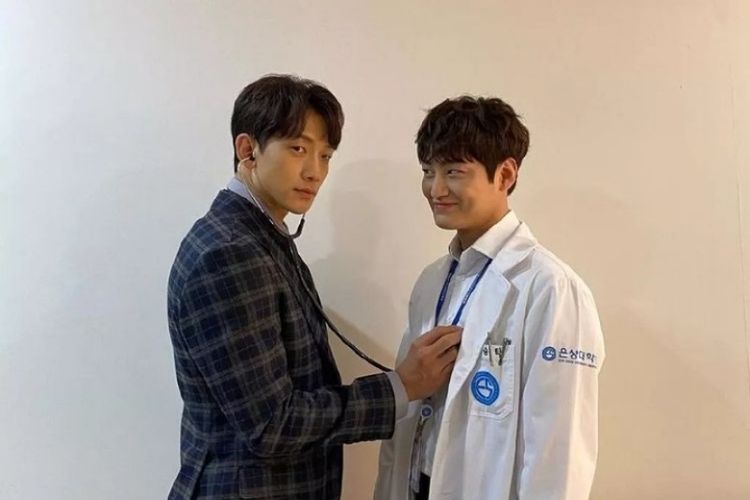 How long will this unusual mixed up medical / mystical situation go on – and will the real happy-go-lucky Seung Tak ever return to the operating theater to become an experienced physician on his own terms? After overseeing and operating on many patients together the two doctors become as close as brothers. Seung Tak can also see other coma ghosts hanging out in the hospital and Young Min begins to like them too. There is only one ghost among this group who is not in a coma but who actually died, and he is the "supervisor" of sorts for everything spiritual going on in the hospital, the compassionate sunbae doctor ghost Oh Joo Myung (Sung Dong Il). We learn from flashbacks that when Joo Myung had been alive he had saved Young Min's life as a child during a boating accident, and so they have a strong emotional connection early on. 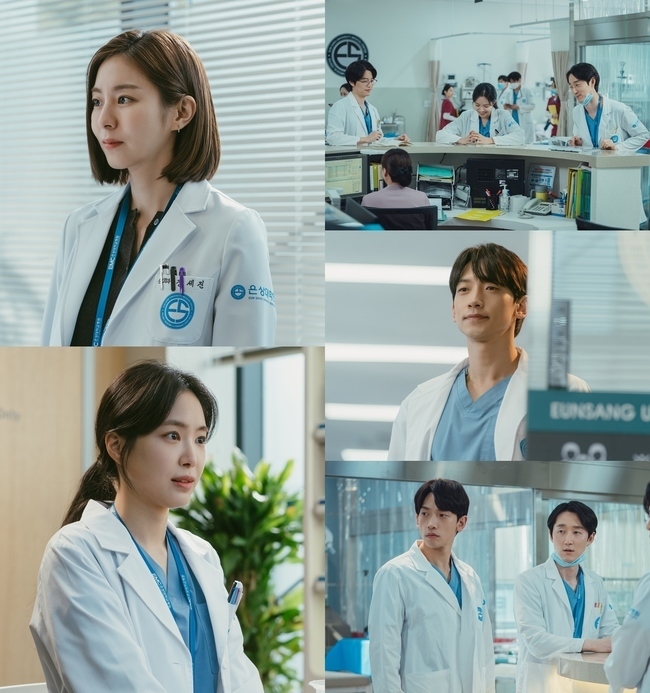 However, one by one, as these coma patients wake up from their deep sleep, their spirits disappear from the hospital hallways, and they have no memory of their lives as ghosts. Another doctor on staff, who was often browbeaten by Young Min before his coma, named Kim Jae Won (Ahn Tae Hyun), begins to figure out what is going on and he tells the main hospital administrator Saeng Won about his suspicions. When they compare notes, and eventually receive confirmation about these spirits, the two men are thrown for a loop. There is no telling what these two distraught men will do now to put a stop to all this "nonsense" at their hospital. Another senior doctor named Ban Tae Sik (Park Chul Min) seems to have a better and calmer grasp of the situation that develops. He isn't quick to judge harshly about such an incredible, life-challenging situation. Then Young Min begins to suspect administrator Seung Won, who has never liked him, may have had a hand in his car accident, to get him out of the way permanently, and he is even more on the alert against him than before.

Will Young Min ever wake up from his coma, and if he does, will he be able to recall all the incredible events which happened in the spirit and physical worlds while his body was asleep? Will he ever reunite permanently with his ex? Will he be able to continue being friends and co-workers with Seung Tak? Will he be able to achieve ultimate justice against those who got him into his car accident to begin with, or will they continue to be a threat to him and to Seung Tak? 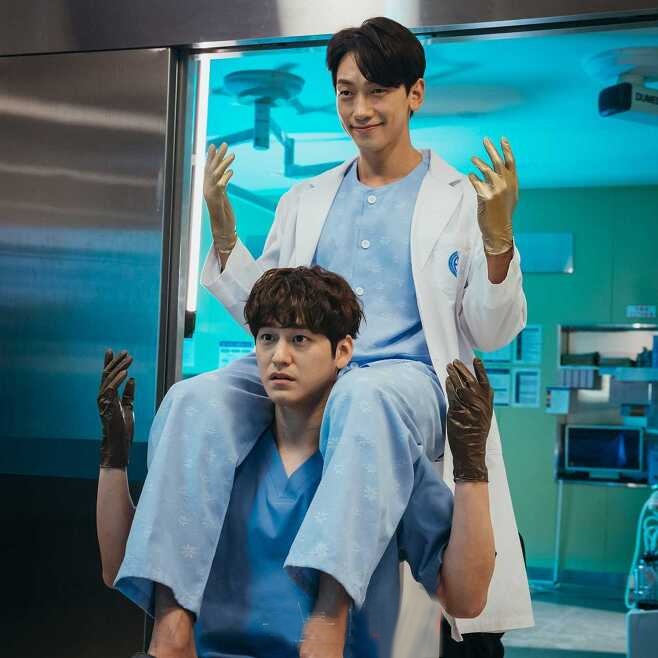 Although the plot of Ghost Doctor is often convoluted I still had a great time watching this drama, and enjoying the bright performances of our two delightful leading men. I can tell they both had a blast making this -- mostly -- comedy. If you're getting tired of watching full fledged Korean melodramas then take a break from them for awhile and put Ghost Doctor on your K-drama queue. It's like a breath of fresh air. It's great to laugh! You can watch it on Viki.com through your ROKU on your big screen TV. Enjoy! 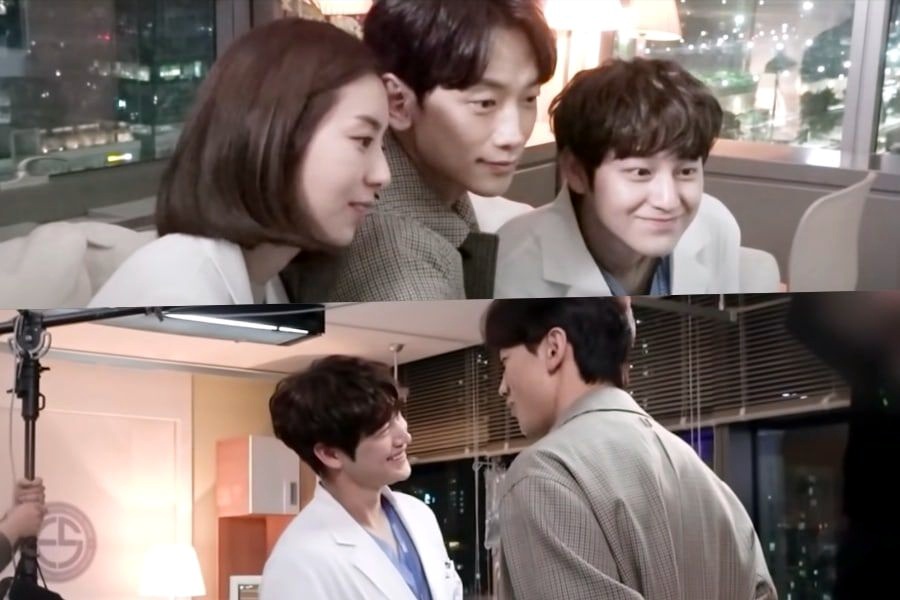