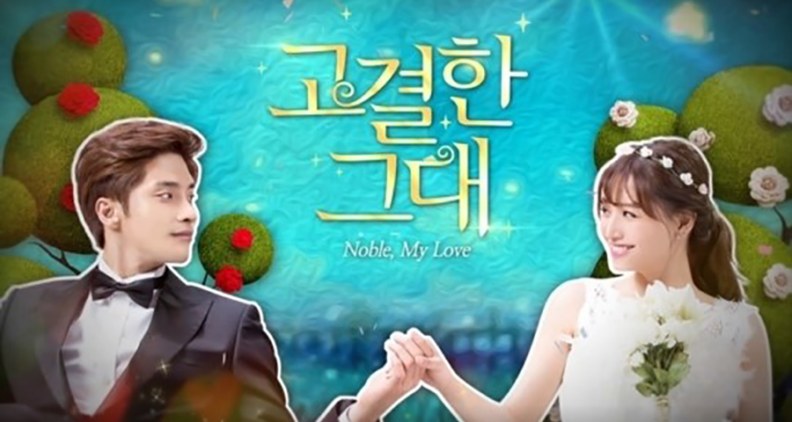 Okay, folks, I have to be honest. This was my #178th Korean drama, and so I am at the stage where I am very demanding about the stories I watch - originality is a big plus for me, and a Korean drama that seems like it was written through a standard formula that could apply to many other dramas is not that ideal to me anymore. Script by Committee is not my idea of brilliance. Noble, My Love (2015) is RIDDLED with typical K-drama cliches to the point where I just sat through this short drama and rolled my eyes through all the usual silliness. I watched this with my daughters and we were all counting the standard cliches we saw (see below). If you are a newbie to K-dramas you'll probably enjoy this lightweight romantic show, but if you're a veteran you will probably struggle to stay awake. It's sometimes charming, more often annoying, and nothing mentally challenging. That about sums it up in a nutshell.

I think the main thing that kept me watching this drama was the leading man, Sung Hoon (Faith), who bears an uncanny resemblance to a very young Byung Hun Lee, to the point where he literally freaked me out on occasion! His build, posture, mannerisms, facial expressions, even his voice sounded like Byung's! (maybe with some Jang Hyuk thrown in for good measure). I pasted some pics of the two actors, Sung on the Left, Byung on the Right, together in one image for comparison. What do you think? It's not an exact likeness but it comes very close through live action, especially in this drama. 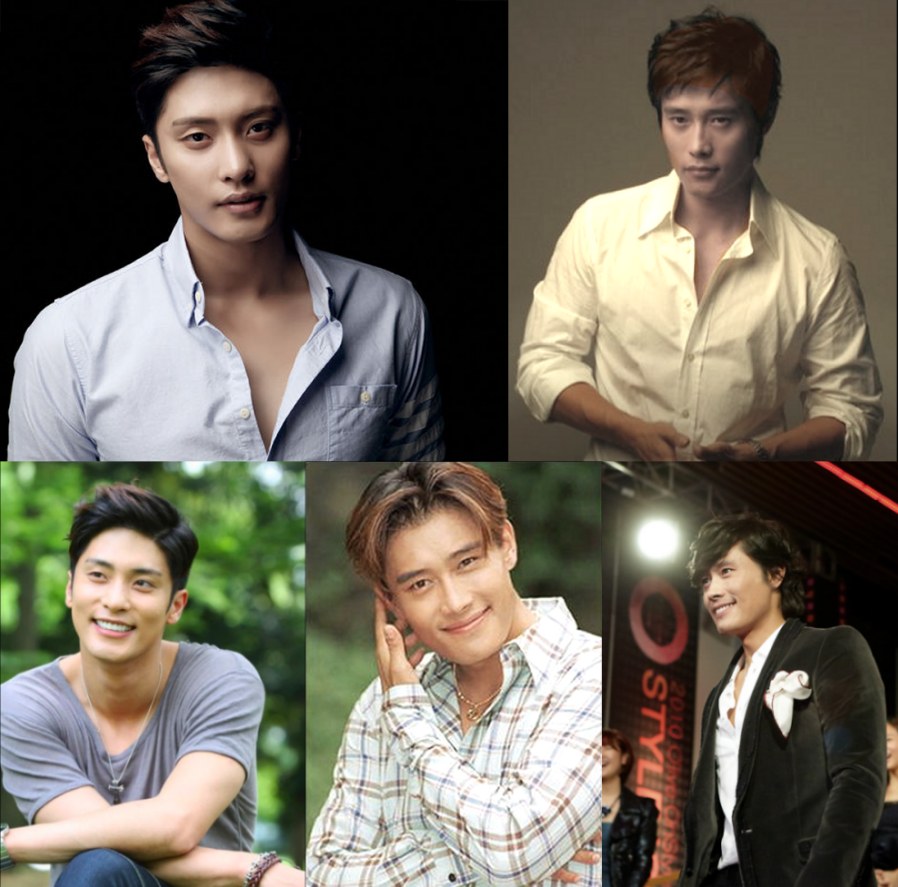 The Story: Veterinarian Yoon Seo Cha (Jae Kyung Kim - watch out for that name Jae Kyung! it's also the name of the villain in My Love From Another Star!), aged 30, is a simple cheerful country girl whose parents own an orchard, and she has her own small vet office where she sees cat and dog patients and visits farms to give cows and horses shots in their rear ends. An idyllic life -- if you don't mind the smell of cow manure -- but one thing is missing: a boyfriend. She has never had one, and therefore becomes rather a joke to her old school friends. They don't understand why she doesn't open a vet office in a luxury section of Seoul so she can make some decent money for herself instead of always being in debt. Yoon Seo lives alone with her pet cat who likes nothing better to do than lay around and meow on occasion.

One day her path crosses with a rich, arrogant Chaebol named Kang Hoon Lee who is running after a dog that was hired to do a commercial for his company but who ran loose from the set. Yoon Seo sees the dog is thirsty and gives it water and then Kang Hoon arrives and tries to yank on his collar hard to bring him back to the set. Yoon Seo reprimands him and tells him that's not the way to treat an animal. He remembers her words later when he takes the dog back to the set and tells the crew to turn off the hot lights for awhile to let the dog recover. "I'm not concerned for the dog" he says stiffly to his right hand man, "I am concerned about the money I am losing. As soon as the dog feels better we can finish this commercial." (Personally I'd stay away from any dude who doesn't like dogs! Dogs -- and children -- are my life!). 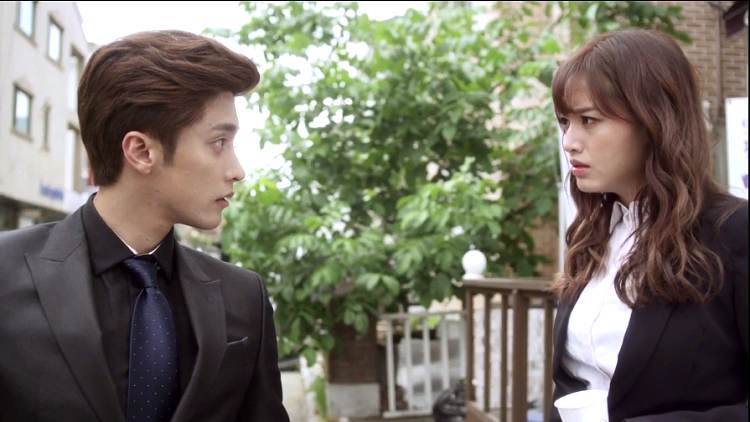 Soon afterward the rich Kang Hoon is kidnapped by thugs and in the process of escaping from them he gets stabbed, runs out onto the street, and who should find him but Yoon Seo, who drags him back to her office and treats and stitches up his knife wound. He falls asleep, exhausted, and so does she -- right next to him on a blanket on the floor. 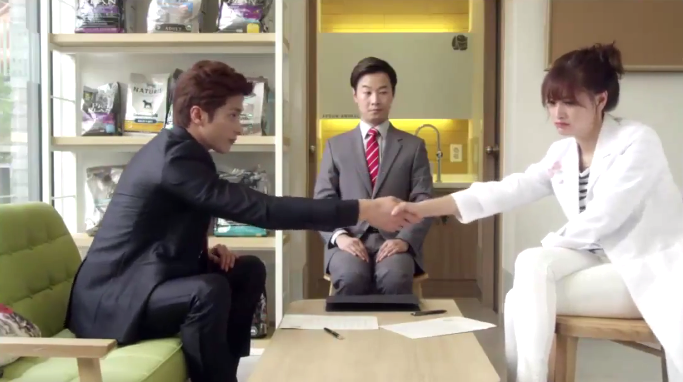 That begins their relationship. For whatever reasons Kang Hoon can't seem to forget this vet, even though she boarders on the hysterical nine times out of ten (any woman who behaved like this chick in real life would need to be committed to a lunatic asylum). He checks up on her background and then tempts her with a brand new vet office in Seoul -- at first reluctant to take up his offer she ultimately decides she'll be able to make more money to pay off her debts if she agrees. However, there are strings attached -- and emotions between them erupt and deepen every day: surprise, surprise, surprise! I could have personally written this script blindfolded. (If you like the idea of a main female character being a professional veterinarian then please, watch Padam Padam instead. MUCH better story!). 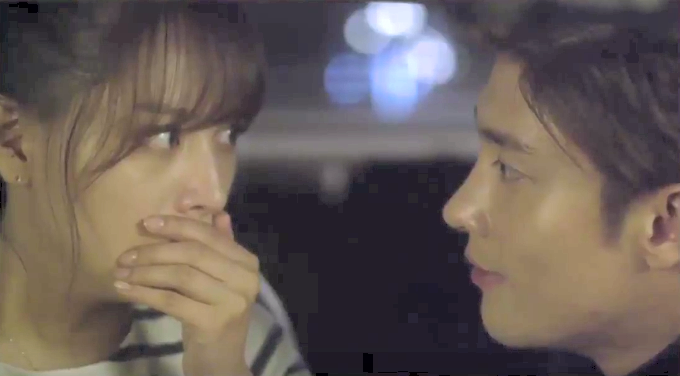 So here are all the twenty K-drama cliches my daughters and I counted while watching this silly show:

ONE. First episode lead male has to take off his shirt to show his abs -- as if women won't watch a drama at all unless this happens - phooey!

TWO. Attraction through Antagonism - the lead couple fight or misunderstand each other constantly at the beginning, which hides unspoken attraction -- this is in 99% of K-dramas!

THREE. He's a rich chaebol, she is a poor vet -- why can't we ever see a rich woman and a poor man? Why is someone always in massive debt in these K-dramas? Can't they budget? In this case she is a professional woman, a vet, yet she's still broke.

FOUR. Piggy Back Ride because lead female gets drunk -- yawn!

FIVE. Vomit Scene with Piggy Back Ride -- she throws up all over him -- I am so sick of this nonsense in K-dramas I could scream. If you have to vomit, why not just do it on grass or a sidewalk? Why always on a person?

SIX. Gossipy friends come in groups of 3's - seen in the vast majority of K-dramas

SEVEN. He stares at the woman while she sleeps and lets his secret attraction for her show up when she's not awake

NINE. 2nd male lead causes lead male to become jealous of the woman he doesn't even have the guts to admit he's enamored of

TEN. Several fall into forced kisses or hugs situations -- usually the woman loses her balance and falls into the man's arms

TWELVE. The female lead has to have a makeover - he pays for a new dress, jewelry, and hairdo for her. Question for the Dumb Male Leads: IF YOU LIKE HER SO MUCH AS SHE IS THEN WHY TRY TO CHANGE HER??? Do you really expect perfection from a woman 24/7? Begone, dumb one!

THIRTEEN. Male lead is supposed to be a rich CEO of a huge conglomerate ... and we never see him actually do any WORK! He is rather obsessing about some woman.

FOURTEEN. Male lead has to have a physical fight with several men at once and disposes of ALL of them promptly, and this is used to show the male lead's martial arts skills and physical prowess.

FIFTEEN. Forced living situations so the two leads can grow close in proximity -- in this case he blackmails her to live with him! What a guy!

SEVENTEEN. Stalking the one you are obsessed over. Ugh. Borderline criminal.

EIGHTEEN. The mother of the male lead shows up and does not want the female lead to marry her son, so she becomes bitchy and interfering and tries to stop them from ending up together.

NINETEEN. At the end we have the couple reuniting in a beautiful nature scene backdrop -- another frequent K-drama clichÃ©.

TWENTY. Frozen kisses! They're supposed to be around 30 and she's never had a boyfriend and all they do is touch lips and FREEZE. Enough with this nonsense. SHOW SOME PASSION, KDRAMAS!

This is Kdrama Writing 101. LET'S PLEASE GRADUATE FROM THIS BEGINNER CLASS, KDRAMA WRITERS! I AM BEGGING YOU!

The reason I feel this way is that I am very practical. If a lightweight show like this jumps to number one in its first week streaming online (and unfortunately it did) then that sends a signal to Korea that the Kdrama audience are simpletons and will watch the lowest common denominator brainless show and give it high ratings. Then we get more silliness like this drama, and less superior, brilliantly written shows like Misaeng, Missing Noir M, Liar Game, Mask, Beethoven Virus, Late Night Restaurant, 49 Days, Shark, I Hear Your Voice, That Winter The Wind Blows, I'm Sorry, I Love You, Nine: Nine Time Travels, It's Okay That's Love, Thank You, Chuno, The King's Face, etc. etc. etc. You know, shows that don't insult your intelligence.

If you like Sung Hoon then watch his extraordinarily powerful short drama Six Person Room. Wow, is that one a doozy!!! 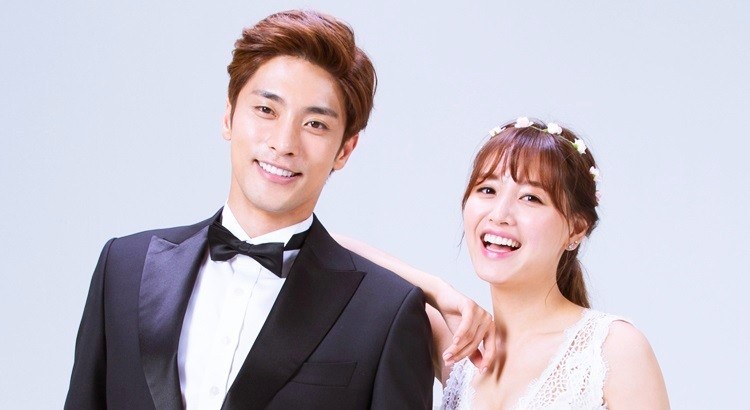