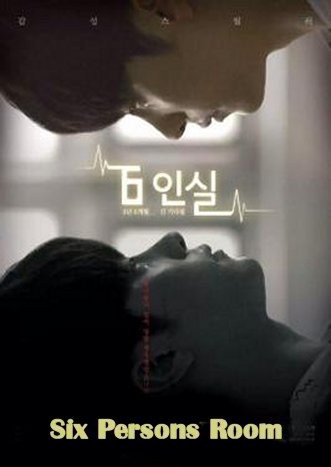 Six Persons Room (2014) is a lovely, haunting, and lyrical short web drama with a lot to suggest, and a lot to say. Starring handsome up and coming romantic lead actor Sung Hoon (Faith, Oh My Venus, Noble My Love) and singer Geummi making her acting debut, and a host of familiar character actresses, there is nothing here to bore you for one minute; I loved the whole drama from beginning to end, watched it a second time with my daughter who enjoyed it too, and the clever writing left me guessing up until the last five minutes about what it all really meant, and then it all became clear to me in one brief moment, with one turn of the main character's head. There are spiritual principles at work in this story, just below the surface. The South Koreans excel at this kind of story better than any other nation. They simply are not afraid of spirituality or sentimentality. That's why I remain so addicted to their TV dramas. I crave both in my entertainment.

Because there seems to be so many misunderstandings about what really happened in this drama (according to comments I read online) I shall enlighten you, even though I rarely describe end spoilers in my reviews. However, this one cries out for spoilers for people who have already seen it but were confused about the ending.

PLEASE WATCH THE SHOW FIRST AND THEN READ BELOW. IT'S HERE IN ITS ENTIRETY, ALL SHORT EPISODES MERGED TOGETHER. ENJOY!

The Story: A construction safety engineer named Min Soo (Sung Hoon), who is a bit of a narcissist, enjoying looking at himself in a mirror and primping his hair to look his best for the ladies, falls from a high ladder while inspecting a building and becomes unconscious, all because he neglected to put on his safety helmet before climbing the ladder, because of course he's young, healthy and attractive, and he didn't want to mess up his hair! Nothing can possibly happen to an invincible young man like him, isn't that correct? ;) 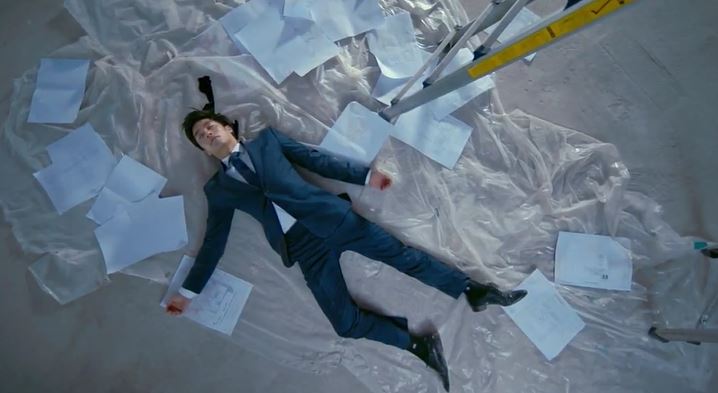 Min Soo awakes in the hospital after his fall and begins to meet the five other patients in his hospital room, four women: mousy Choi Ha Seon (Bae Min Hee) with lumbar disk problems and carpal tunnel syndrome, past marriage age and very much minding it; oldster Park Gochbun (Lee Yong Nyeo) a flirty type who loves to dance but is often injured while doing so; middle aged Park Wonju (Kim Min Kyung) a burn victim, who knits a red sweater for a son who is "far away"; musician Lee Ji Won (Geummi), car accident victim (or is she?), who is the prettiest one in the room but full of contradictions; and one cute little twelve year old girl named Kim Yoo Mi (Kim So Jung) who likes to boast about her accomplishments and her sterling intellect.

Every person in the room has her own unique personality, which makes them fun to watch, and Geummi is the most flamboyant one, closest to Min Soo's age, whom he falls in love with over chicken and beer and a pretty ukulele song called Sunlight..

However, as the story progresses his happy and funny experiences with the ladies begin to seem a little surreal: maybe they are all dead and in heaven and the hospital ward is actually empty? Or maybe they are all in purgatory waiting to be accepted into heaven? Or maybe they're all in a mental hospital? I've seen lots of amusing comments like this from people who are totally confused about this drama ... so that is why I will reveal the truth, and it's actually pretty simple. Just like it was simple all along at the end of That Winter, The Wind Blows (2013) where Song Hye Kyo and Jo In Sung did NOT die at the end, though the vast majority of viewers thought they did die, just because the camera people made the edges of the film frame soft with a filter! Aigoo! 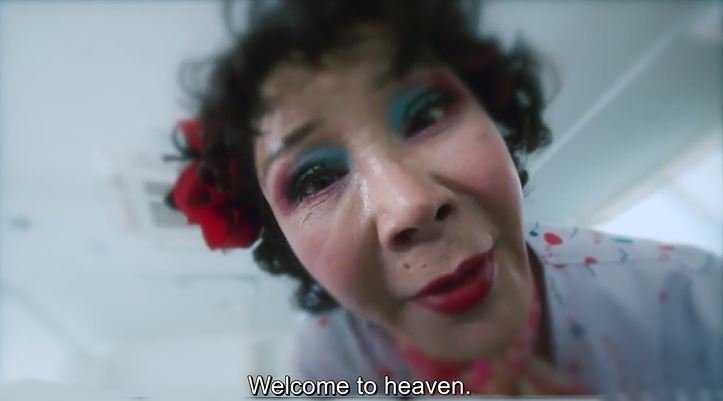 K-drama Fans might recognize actress Lee Yong Nyeo,
who played the creepy mystic-medium in Master's Sun.
They always seem to cast her in funky roles. LOL.


The opening moment of the show seems to suggest that they are all dead, as the oldest of the women Gochbun looks over Min Soo's bed at his face and says "Welcome to Heaven." However, if you've been at any hospital you know how unlikely it is that a hospital could be heaven, or how odd it would be if one man would be roomed with four ladies and one young girl child: the young child would be kept in a children's ward of the hospital, not with grown-ups.

Even though most viewers may be doubting what they are seeing, in the back of their minds they could think, "Well, maybe this is an emergency ward of a hospital and there's limited space, so they do room them together out of necessity?" Nope. Trust your instincts: that's not it. ;) 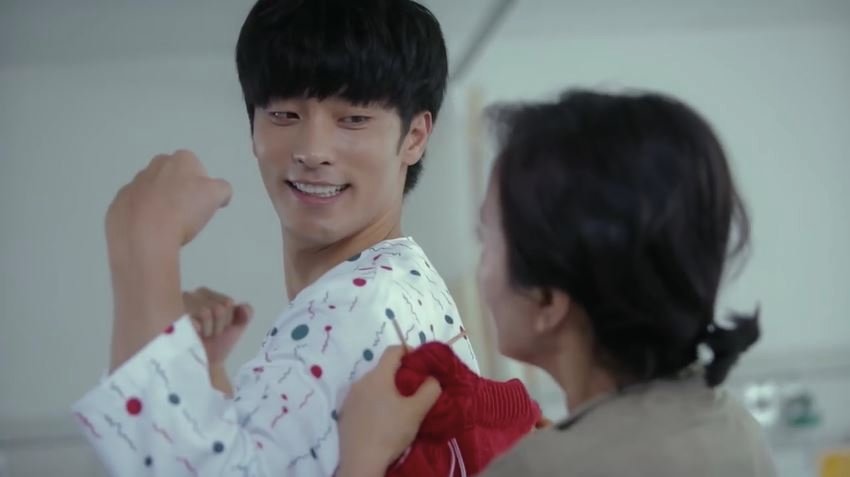 
Min Soo develops fond feelings for all the ladies in his room, and one night they even sneak in alcohol and have a party (with little Yoo Mi getting Coke instead). He grows so fond of them all that it comes as a jolt as one by one they seem to be leaving him, being discharged or otherwise just disappearing. Then suddenly they seem to be back in his room. Just what is going on? 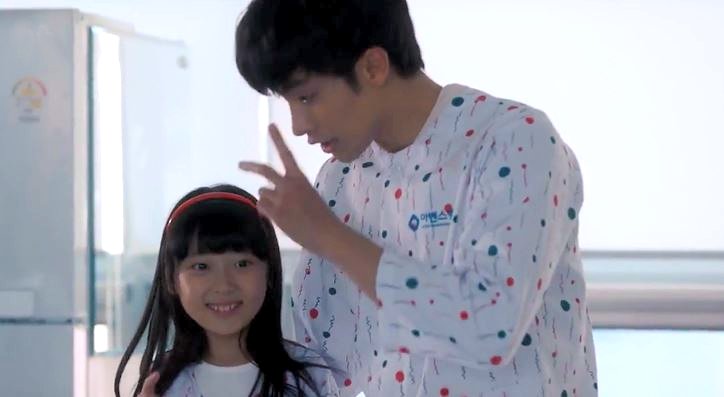 MAJOR SPOILER: It is finally revealed that Min Soo NEVER WOKE UP FROM A COMA. Not once. That's the secret behind this drama. "We're all in your imagination", they tell him as a group on the rooftop of the hospital, where he runs to in his mind, scared that he'll never see them again. At this point he feels they are his only family ... and in part for good reason!

That's not purgatory or heaven in this drama: his mind is working on some level even though he's been in a coma for three and a half years, he is hearing things and sizing up personalities of people who enter his room, even though he cannot communicate verbally with them; his mother is often at his side waiting for him to wake up, and she turns out to be the red sweater knitter Wonju, and sometimes his younger sister visits him in the hospital and she turns out to be none other than the precocious Yoo Mi (note again that at the beginning of the drama Min Soo tells Yoo Mi he has a younger sister, and she tells him she has an older brother, and they both say their fathers are dead -- well, it's the same father). They were actually talking about each other, but Min Soo's injured brain at the time did not make the personal connection -- he just knows he cares about her. 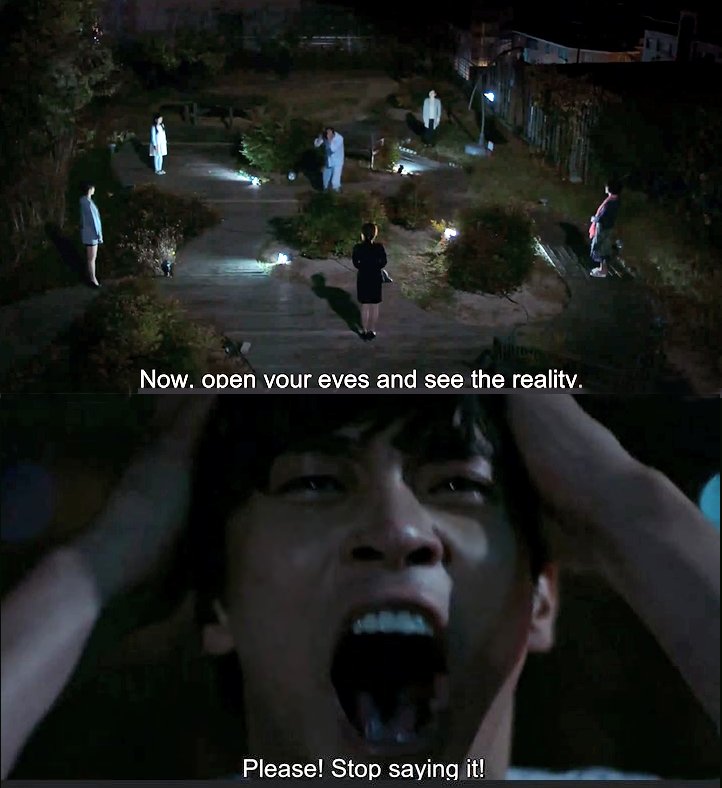 If Henry James ever wrote a K-drama,
it would be this one. ;)


It is fully revealed in the last episode that even though these ladies are imaginary in his mind they are based on REAL PEOPLE working in, or visiting, the hospital. So he is conscious of them on some spiritual level, but can't speak to them because he's still asleep. Two of the ladies are nurses in reality (Ha Seon and Ji Won), and one is a cleaning woman (Gochbun the dancer). Min Soo had infused the real people with the qualities of the people he created in his imagination, perhaps to make up for the lost years he had spent asleep in bed. He was desperate for companionship and had to create them in his own injured mind. 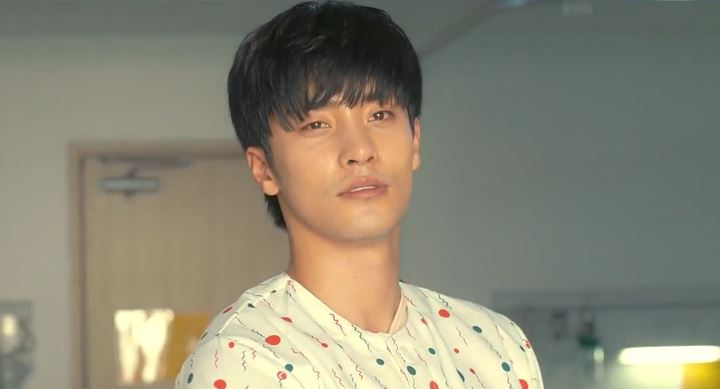 The story ends very poignantly, and the writer was excellent in leading you to think one scenario was happening when it was something else entirely -- in truth I was guessing up until the last 5 minutes; love that! I like to be surprised. I get quickly bored these days with cookie cutter dramas: I'm always on the lookout for something different and 6 Persons Room fit the bill.

In the end the moral of this drama is: WHEN YOU NEED TO WEAR A HELMET FOR SAFETY REASONS, WEAR YOUR HELMET! No excuses! The life you save may be your own. 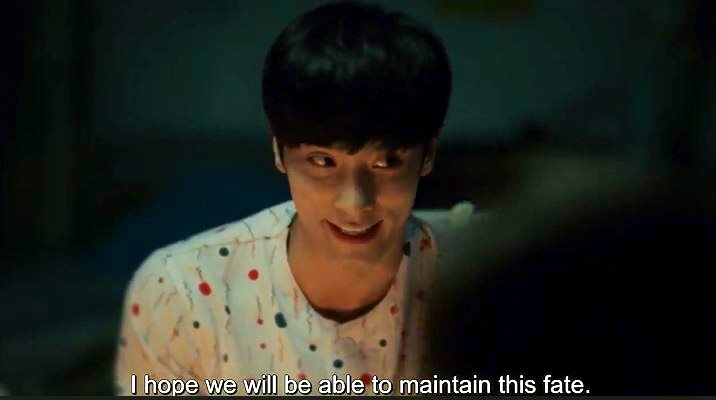