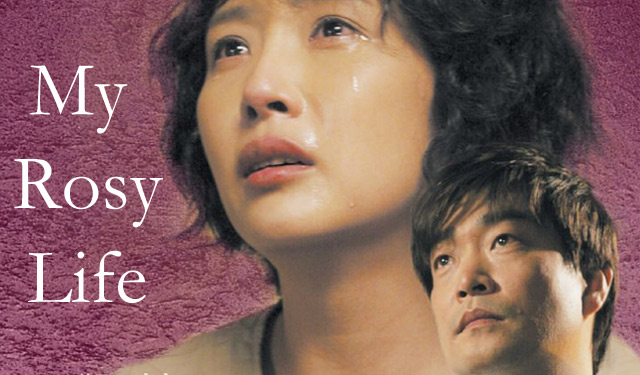 This Korean drama, My Rosy Life (2005) set not just high ratings records in Korea, topping out at an incredible 48.3%, but set a record with me personally: I started to cry within the first fifteen seconds after this drama started! I rarely ever cry in the first episodes of dramas, let alone at the beginning credits! The reasons for this were simple, "La Vie En Rose" was the title theme song, which I love, and they flashed images during the credits of the main actress' face, Choi Jin Sil (Star In My Heart, The Last Scandal), who committed suicide only three years after this historically important Korean drama aired; that combination was all it took for me to tear up immediately, sentimental soul that I am.

I can say with certainty that this actress' face is one of the most honest cinematic faces I've seen in my life. Every emotion she projected looked like she was actually feeling what the character felt, that she actually was this person. To make herself look more realistically an "Ahjumma" (older married lady) she gained weight for the role and dressed down to make herself look less like a star and more like someone's overworked, tired wife and mother, which is what this role called for. (Actually some of that DID reflect her real life, except for the fact that she was just divorced from a despicable baseball player wife-beater husband by the time she made this drama).

Above all, this drama is an in-depth examination of a marriage, its painful ups and downs, including an affair by the husband's character. It will therefore probably appeal mostly to older married people who have been through similar circumstances to the characters in the show. If you are looking for a drama with flower boy idols just starting to act then this is not your show. If you like to see mature actors strut their stuff magnificently then don't miss it! I probably cried harder and more often watching this drama than any other Korean drama ever. 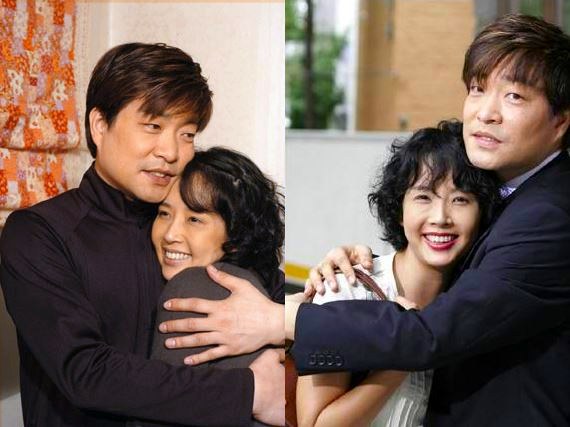 I put these pictures together and then realized
afterward it looks like his hand is extended into
the next image, just too funny and sweet!

Choi Jin Sil's co-star in this unforgettable K-drama was Sun Hyun Joo, who has had a wide variety of different roles in important Korean dramas, including Sandglass, Love Letter, Three Days, and Swallow The Sun). Apparently he had spoken to her on the phone not too long before she died and he was devastated at the news of her death, attending her funeral with all respect. They have good, warm chemistry in this show, despite the fact that his character was a selfish heel through much of the beginning parts. His character was supposed to be three years younger than hers, but with even more immaturity than the years' difference would suggest. Only toward the second half of the drama to the end did his character begin to reform and mature so that we could finally start to respect him and have sympathy for him. 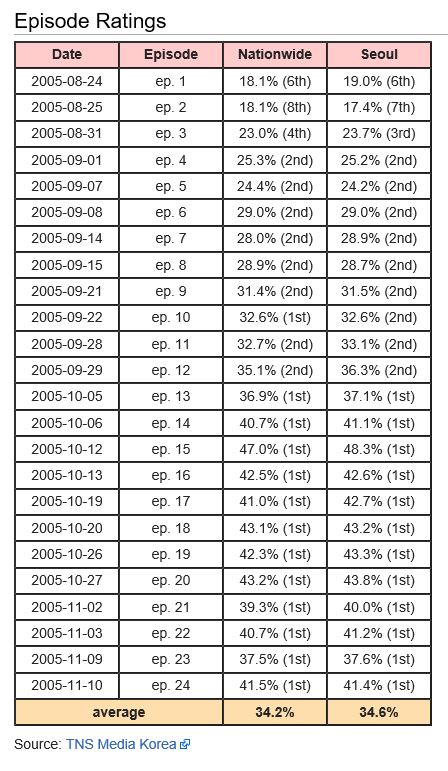 The cast of My Rosy Life received acting recognition at the year-end KBS Drama Awards, winning nine awards combined, including Top Excellence Awards for Choi Jin Sil as the wife character in the show, and veteran actress Kim Hae Sook as Choi Jin Sil's character's birth mother who had deserted her, and an Excellence Award for actor Sun Hyun Joo as the husband character. At the Baeksang Arts Awards in 2006, Choi also won Best Actress in a TV Drama, as did Kim Jong Chang for Best TV Director.

The Story: Housewife and mother Maeng Sun Yi (Choi Jin Sil) takes care of her small modest home and two young daughters while her husband Ban Sung Moon (Sun Hyun Joo) is the primary wage earner at a bank yet has a secret mistress on the side, a divorced woman with no morals, Oh Mi Ja (Jo Eun Sook). The mistress puts her nasty foot down and says if he won't divorce his wife that she will leave him. He abruptly, without thinking, says "Okay, I will" but comes to regret it later. Meanwhile the sneaky, money loving Mi Ja has an older rich man interested in marrying her, which she conveniently doesn't tell her current lover.

Sun Yi is about to have her little world crash in on her. She's never had an easy life, with a birth mother who had deserted her when was a child, but her philosophy has always been to plow through everything without complaining and that only in struggles can we be truly "alive" and find "happiness". Some people today might call her a "doormat". However, be patient, Viewer, for the way we see her at the beginning of the drama is not how she will remain as her life goes on, similar to the much later K-drama Twenty Again (2015) with Choi Ji Woo, who improved her life when she discovered her husband was cheating on her. 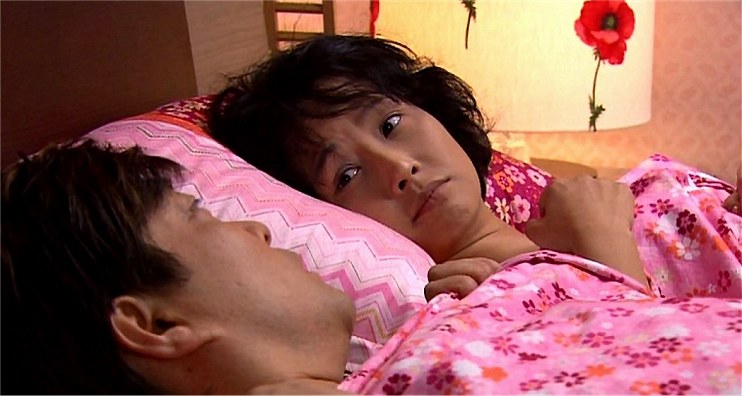 Sun Yi had sacrificed her childhood and teenage years, which we see in flashbacks, for the sake of taking care of her father (veteran actor Jang Yong whom I've seen playing so many father type roles that his resume could fill a book with them!), who had started drinking heavily after her mother (Hae Sook Kim) abandoned the family when she was ten years old, and she had taken care of her two younger siblings as well (foreshadowing how she would also self-sacrificially care for her own two young daughters in future); her brother Chul Soo (who is never seen) had even gotten a medical degree with money she had earned to put him through school, and then when his sister's life starts to unravel he conveniently settles in America to escape his moral responsibilities to his family. But how realistic this is! In so many families it's always one child who ends up being the primary caregiver of younger siblings and parents as everyone ages.

Sun Yi's younger polished but rather spoiled sister, Maeng Young Yi (Lee Tae Ran in a beautiful performance), becomes a successful career woman due to the help of Sun Yi's earnings for her college tuition years earlier. She immorally has a physical relationship with her first love Lee Jung Do (Jang Dong Jik), who is now married to another woman Heung Jang Mi (Choi Ji Na) who used to be her friend years before. 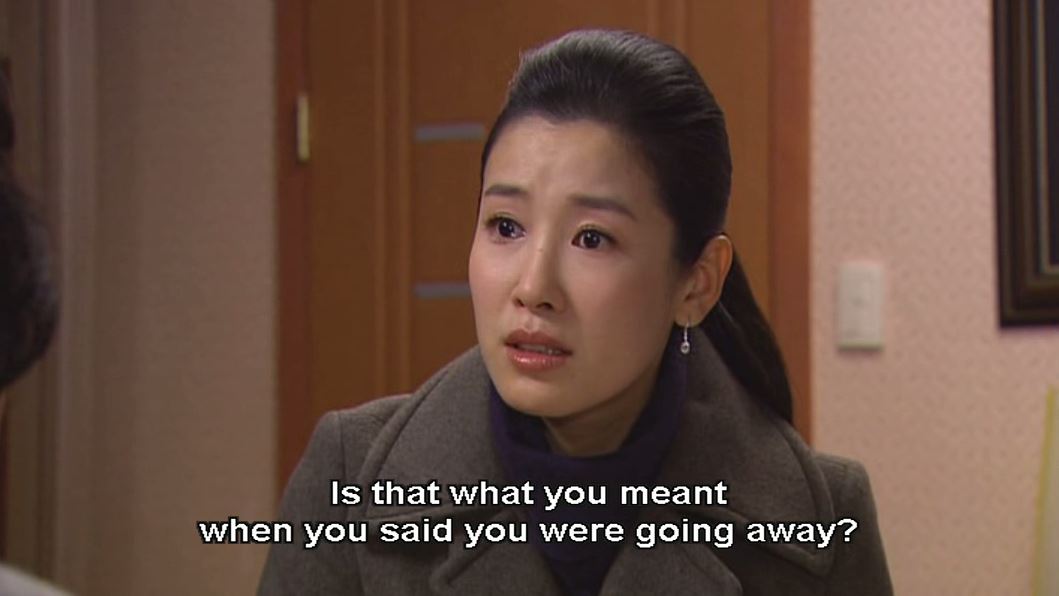 When Sun Yi tries to admonish her sister about the affair the sister still has trouble giving up the man she loves, even though deep down she knows it's the right thing to do. 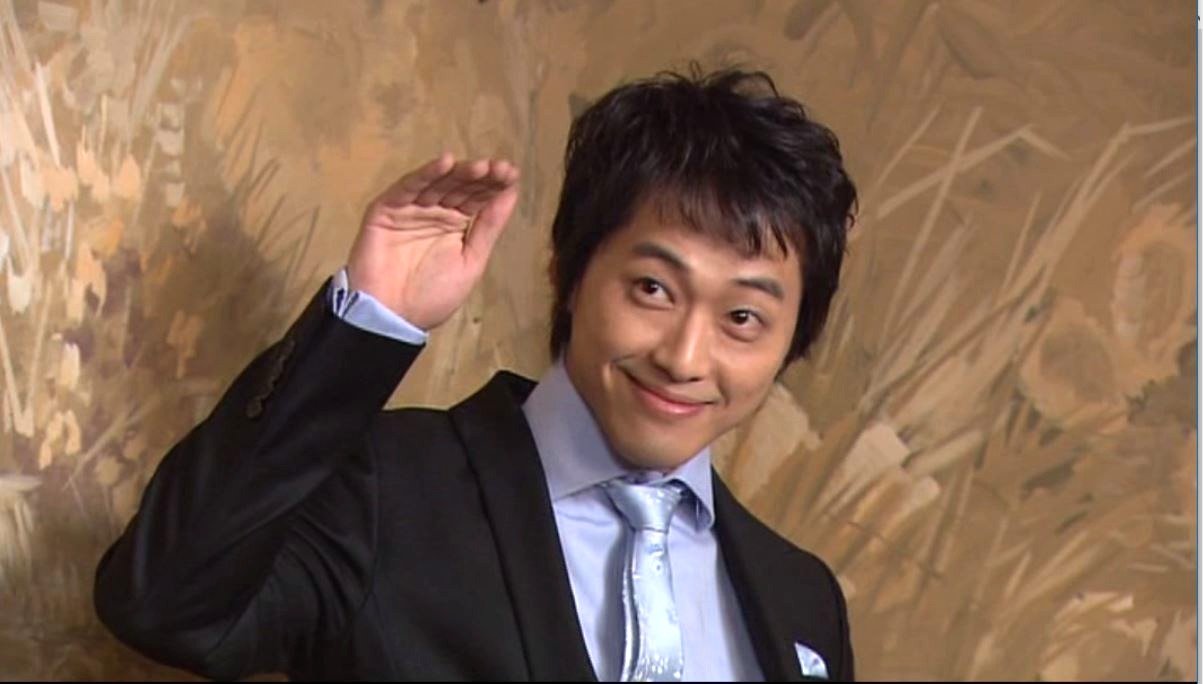 Eventually the younger sister meets a naturopathic doctor named ... Doctor (yes, that's his given name) played scrumptiously well by a very young Nam Goong Min (I Need Romance 3, Remember, Can You Hear My Heart?). His character was just so kind and good that I found myself melting every time he had a scene and wondering why ALL men couldn't be this kind. :) 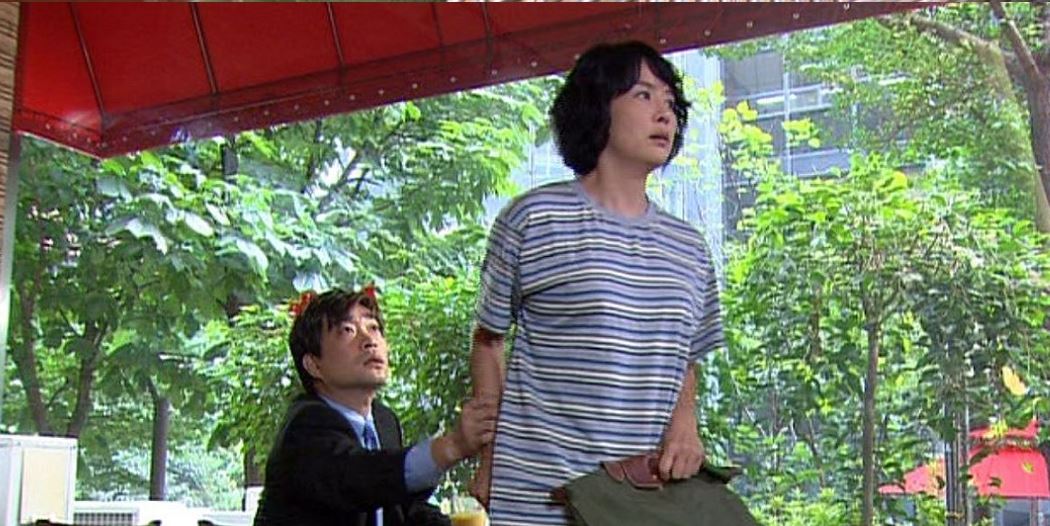 Sun Yi then gets the worst blow of all and is diagnosed with stomach cancer (probably from the stress of taking care of everybody but herself all those years!). She is truly distraught and it changes her life. She no longer wants to be anyone's battering ram and she sticks up for herself, fighting and not giving up, finally realizing how much her innate goodness and self-sacrifice toward others had been taken advantage of by her family.

What will she do about her rocky marriage? After learning about her disease, her family finally begins to understand how much she means to them, and her husband finally becomes humbled and begins to give her the love and attention she has deserved all along. However, will it make a difference in the outcome of her disease, of her life? 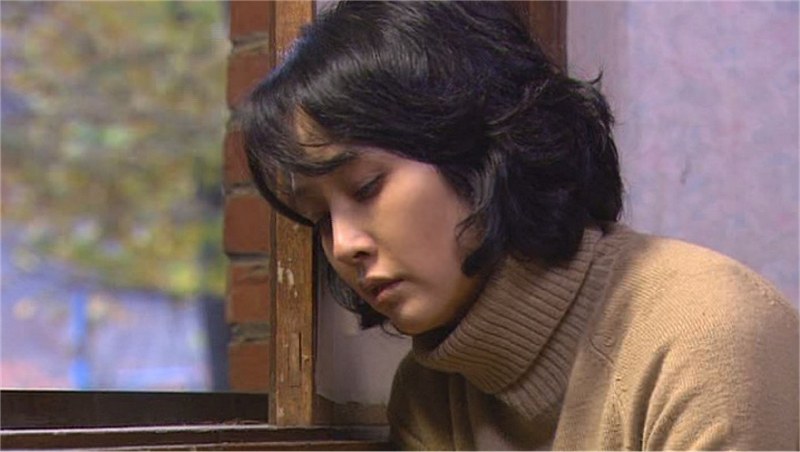 For a long time this drama has been unavailable, DVD box sets for it have long been out of print, and when found can cost up to $200 to buy! My friend happened to loan me her now OOP legal DVDs so I could watch it, since I love this actress. Enjoy, but have several boxes of tissues ready! This show is not for the faint of heart or for dreamers who don't realize how ugly life can get. This show is only for realists and the brave. 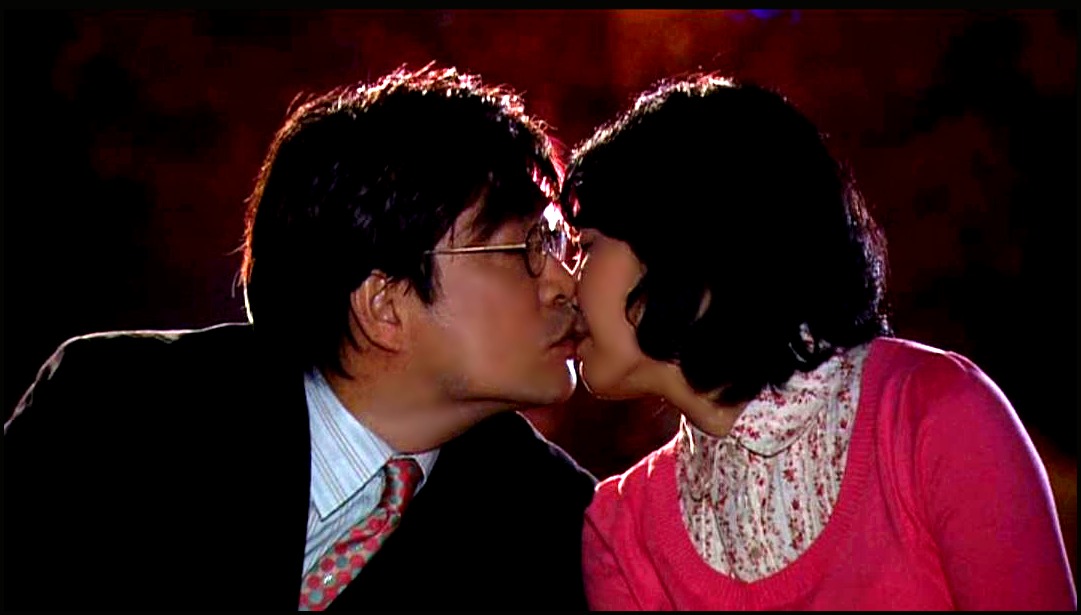 ~~~~~~~~
Choi Jin Sil in hospital after being beaten
by her husband which resulted in a very
public divorce. Beware of the abusive ones,
ladies, they are WORTHLESS. 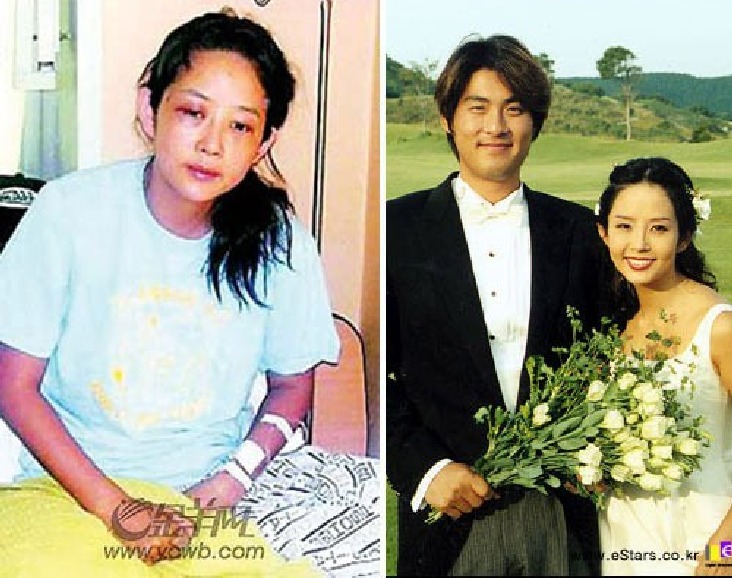 In 2013 her baseball player husband who had beat her
up committed suicide! Good riddance to bad rubbish!