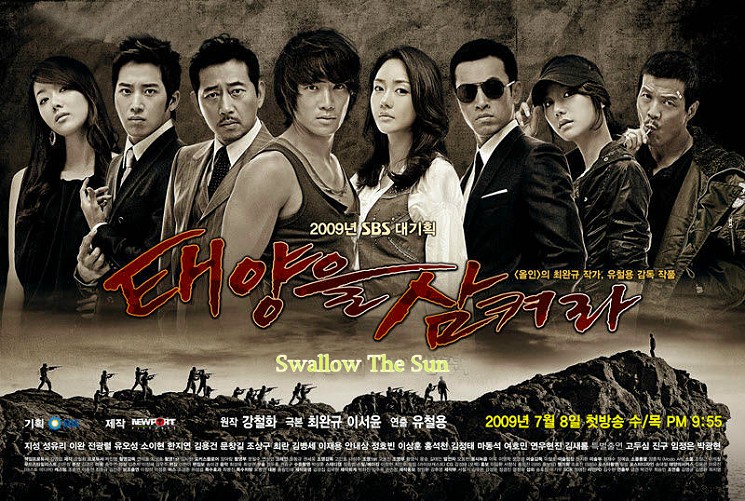 After enjoying the casino-based drama, All In, I decided to follow it up with Swallow the Sun (2009), sometimes nicknamed All In 2. It is also set in the world of high paced gambling in both Korea and Las Vegas, and features the beautiful landscapes of lovely Jeju Island. However, that is where most of the similarities end, as Swallow the Sun proved to be an even darker drama with the emphasis on revenge rather than star-crossed romance. In addition, it is the only K-drama I have ever seen that spotlights Cirque de Soleil!

Swallow the Sun takes a little time to get going. In the first episode, we do not even meet the drama's hero. Instead, we see a back-story that will later become more significant in terms of the main players.

A group of criminals arrive on Jeju Island, brought there to provide manual labor. The taciturn but attractive Il-hwan Kim (Goo Jin) is among them, and he manages to escape from the pack. His military jailers track him down, firing their guns and wounding him. Finally, they corner him at the edge of a cliff. He jumps into the ocean, drifts into the sea and washes ashore, where he is found by pretty island girl Ahn Mi-yeon (Jung-eun Im), who is an expert diver. She has not encountered many strangers in her young and sheltered life, but she does not turn away from him or surrender him into the authorities. Instead, Mi-yeon hides Il-hwan in a cave and nurses him back to health.

Though they have little in common, they are attracted to each other and the tough Il-hwan is softened by her sweetness and solicitation toward him. They make love and he wants her to run away with him, but she realizes this would be impossible. She does however, decide to meet with him for what she believes will be their final time together before he makes his escape. 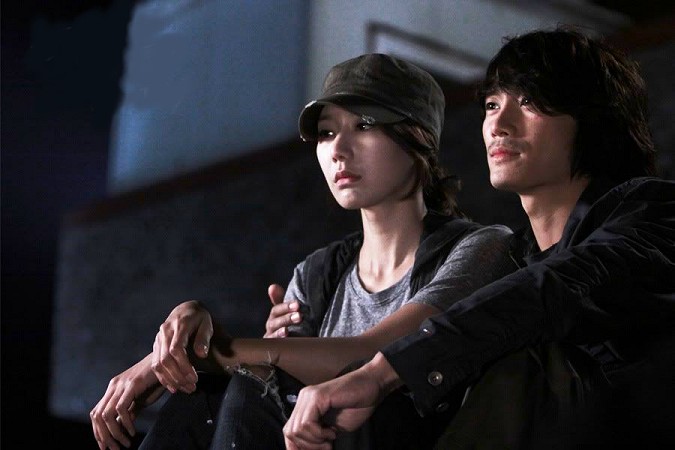 Meanwhile, her mother has gotten wind of what is going on and notified the police that her daughter has been kidnapped by this notorious felon. The authorities eventually discover the two in their hiding place and drag Il-hwan back into custody despite Mi-yeon's protests. A short time afterward, the heartbroken Mi-yeon discovers that she is pregnant. Her mother hides her away so that the others in their village will not know of her shame. After Mi-yeon gives birth, her mother abandons the baby in the countryside and tells her daughter that the child died. A childhood friend, Hyeon Ki-sang (Jae-young Lee), a policeman who has always loved Mi-yeon himself, finds the baby, and brings him to an orphanage. This child, Kim Jung-woo is our hero. As a boy, we see that he is a bit of a troublemaker who will later fall into a crowd of petty young thieves. Fortunately, Hyeon Ki-sang has continued to be a friend and mentor to Jung-woo, trying to keep him on the straight and narrow, and serving as a father figure to the boy. Jung-woo also finds an early love interest in a studious, pretty girl whom he will later encounter as an adult.

Jung-woo (played as an adult by handsome but somewhat bland Sung Ji, also featured in All In as the secondary male lead and star of Secret and Save the Last Dance for Me) initially takes after his father, becoming a small-time hoodlum with a chip on his shoulder. However, he is also brave and fearless, and has some very loyal friends. Though Jung-woo's life does not seem to be going anywhere, his luck apparently changes when he saves the life of a rich, powerful and mysterious businessman, Jang Min-ho (Hwayng-ryul Jun) who owns the largest mansion on the island and is feared by everyone. 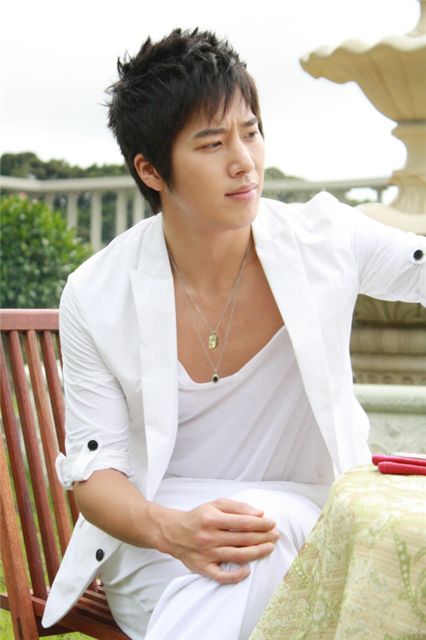 The tycoon offers him the opportunity to make some good money as a sort of bodyguard and chaperone to his irresponsible wastrel son Tae-hyuk (Wan Lee from Stairway to Heaven, Tree of Heaven and In-Soon is Pretty, a total heartthrob), who is currently living large in Seoul. Jang Min-ho hopes that Jung-woo may prove to be a solid role model for his son and keep him out of trouble. So Jung-woo accepts the job and leaves the island for the big city. He presents himself to Tae-hyuk, who is none too pleased with the arrangement because he has an embittered relationship with his father. He had grown to adulthood before he even met him. Jang Min-ho wants his son to succeed him in business, but personally he has little respect or love for him; he just wanted an heir. 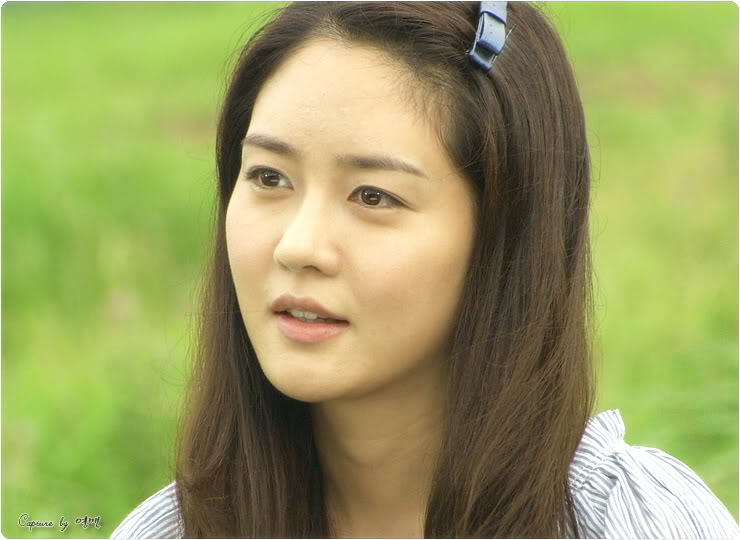 Tae-hyuk has taken a fancy to a pretty young lady, Lee Soo-hyun (Yu-ri Sung, who played a similar type in The Snow Queen). He invites her to join him on his yacht, along with his friends and Jung-woo. She is impressed by neither his wealth nor his manners, but has a kinship with Jung-woo, learning that they were both raised on Jeju Island and that he in fact remembers her as a girl (surprise, this is the girl he had an early crush on). Soo-hyun is an independent and ambitious young woman in her own right, overcoming poverty to study overseas, and she aspires to become a program designer with Cirque de Soleil. Then there is a calamitous turn of events. During a gathering at his father's mansion on Jeju Island, Jae-hyuk engages in a fistfight with one of his friends; the young man falls, hits his head and is instantly killed. Jae-hyuk panics and relies on his father to get him out of this mess. The solution? Convince Jung-woo to take the blame, promising him that he will receive a light sentence and be rewarded upon his release. Of course, you should always be wary of the promises of very rich people who care only about themselves, as Jung-woo eventually learns after accepting this proposition.

Jung-woo does indeed go to prison, but finds that Jang Min-ho is not exactly going to take care of him as promised. In fact, he tries to get rid of this young man who knows too much - permanently. To make matters worse, Jung-woo, with the help of an older policeman friend (the same friend of his now dead mother, who rescued him from abandonment and has been watching over him ever since) learns the true identity of Jang Min-ho. He was the convict Il-hwan, and he is Jung-woo's father. 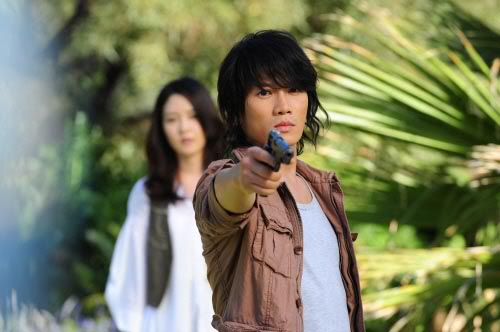 This knowledge, and resentment, sets Jung-woo on a path to seek revenge and to make his own fortune so that he can take on this ruthless tycoon head to head. The majority of the drama takes him into a life as a mercenary for hire for wealthy patrons. Along the way, he pursues an on-again, off-again relationship with Soo-hyun, who has moved on to a prestigious managerial job with Cirque de Soleil. Tae-hyuk continues to pursue her too, and clashes with Jung-woo at every turn. Swallow the Sun is non-stop action, with plenty of subplots and supporting, colorful characters. One of my favorites was the taciturn but attractive mercenary Jackson Lee (Oh-sung Yoo, who had a featured role in Faith), who mirrors Jung-woo in his star-crossed love story with a sweet girl named Amy (Hyun-jin Park). Both men tend to live their lives on the dark side, and not wanting to draw their women into their turmoil, rebuff them to keep them safe.

The drama has many twists and turns, and the cliffhangers keep you guessing. With its captivating scenes of Cirque de Soleil performances, a detour to Africa, scenic Jeju Island locales, and gritty criminal dealings, Swallow the Sun is certainly not dull. The only true weakness - and it is a considerable one - is that the series lacks much heart. The love story is only occasionally realized, and the chemistry between the two main romantic leads is lukewarm at best. Both Sung Ji and Yuri Sung are attractive performers, but they also come off as a bit stiff and remote.

Wan Lee, one of my favorite actors, has tremendous charisma with a disarmingly sweet smile, but he is not able to deploy either of those attributes as Jae-hyuk, a weak, un-likeable character. He too cannot muster much fire with Yuri Sung's standoffish Soo-hyun. So we are left with a powerful narrative drive, but not a lot of emotional attachment to the characters or what becomes of them. 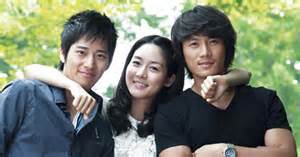 Jung-woo's relationships with his band of childhood buddies - like the tomboyish Seon-yeong (Ji-yeon Han) who has a crush on him and at times puts herself in harm's way to help him - are more interesting than his courtship of Soo-hyun, whose role is just not sufficiently developed to make her worthy of the attention of the two battling half brothers. On the other hand, the ruthless father played by Hwayng-ryul Jun is a villain you really do love to hate - he appears to have no redeeming qualities whatsoever, especially as he will do anything to prevent his true identity from being revealed, even if it means doing away with his own son.

Overall, Swallow the Sun is an enjoyable drama, but it is hardly of the caliber of its predecessor, All In. It is refreshingly free of cliches, and also of sentiment, and it holds your interest for the majority of 25! episodes. Although it is not one of my favorites, it did make a lasting impression with its ambitious scope and fast-paced story, and it is likely to be a drama you will not be able to stop watching. 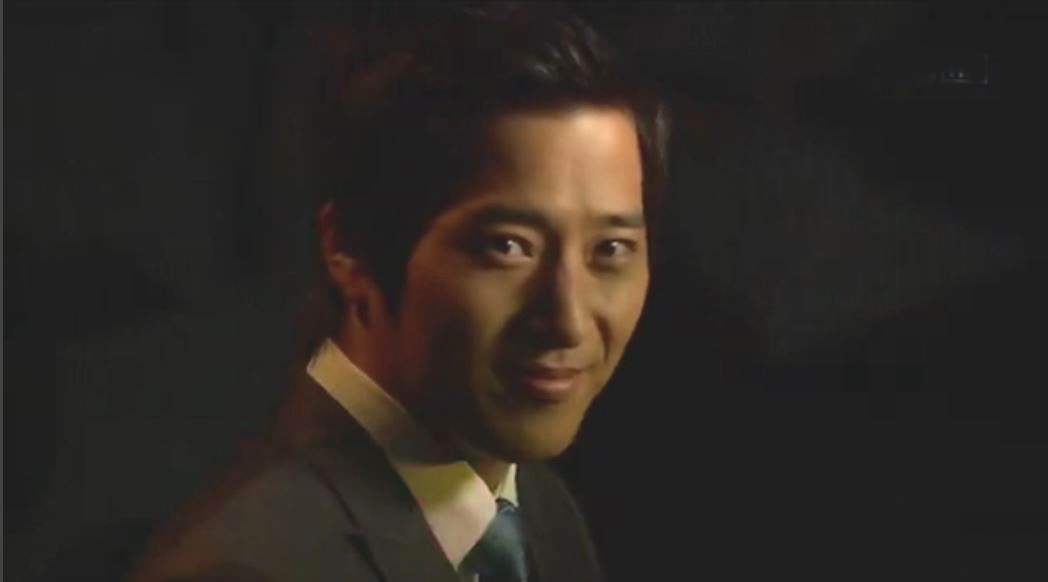 Where the heck is Lee Wan, Korea?
We want him back! Such a superb actor!