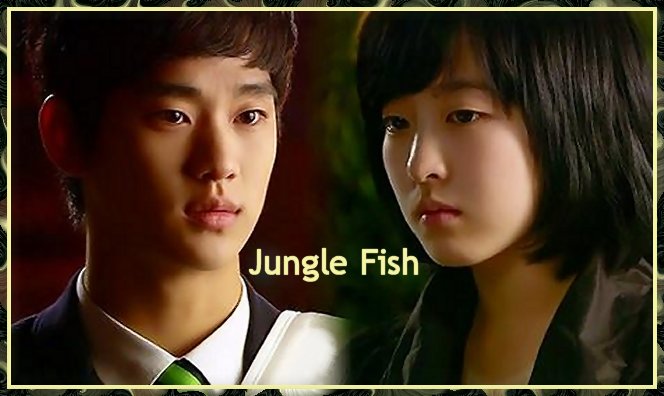 While web surfing one day I discovered a rare drama of fantastic Korean heartthrob actor Kim Soo Hyun's (My Love From Another Star, The Moon Embracing The Sun, Producer, Will It Snow At Christmas?, Dream High), one of his first dramas, from 2008, a special called Jungle Fish.

I smiled when I saw the cast list, and I was ready to watch it instantly: I just love him. Not only is Kim Soo Hyun beautiful to look at, he's full of natural charm, sensitivity, humor, and of course acting talent. I think once I finished this drama special I've seen everything he's ever made, according to his credits on Wikipedia and elsewhere, including all his feature films too. I even watched the episodes of Running Man he made. That's when you can tell a true fan: they want  to see everything their favorite actors have made, from the beginning of their career to the present day. Just wanting to watch their newest stuff doesn't count in my eyes as someone being a true fan. 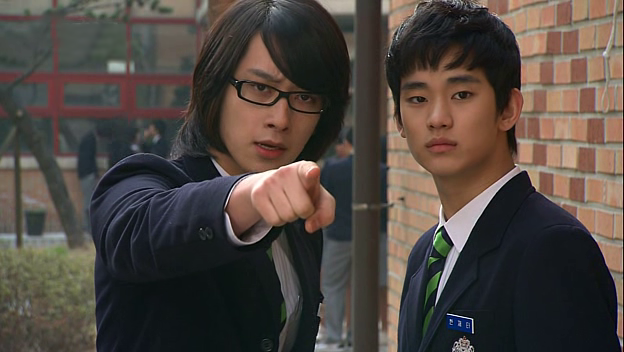 Jungle Fish 1 is almost a documentary style examination of a typical city high school in Korea, with many different types of teenagers; it's only one episode, with a VERY young Park Bo Young (A Werewolf Boy and Oh My Ghostess) as lead female, though I could barely recognize her at first because she was at the very beginning of her career, too, just like Kim Soo Hyun. The show was excellent at showcasing the many pressures high school students face today, including bullying.

The Story: This is basically a detective yarn about two male students who are secretly tracking down the identity of thieves who stole the answers to a major test the student body had to take together. Kim Soo Hyun plays Han Jae Ta, an excellent but quiet student, and his best friend Park Young Sam (Chansung), a more sociable fellow, are the two main students trying to discover the truth about who stole the exam answers, and they are helped by spunky Lee Eun Soo (Park Bo Young), someone who cares about doing the right thing. When the truth is revealed it turns out to be two troubled students, a boy and a girl, who then appear to commit suicide by jumping off a rooftop when confronted, but it was all a sham, a cleverly planned escape. Will the two thieves ever have to pay any real consequences for taking the exam answers ahead of time? 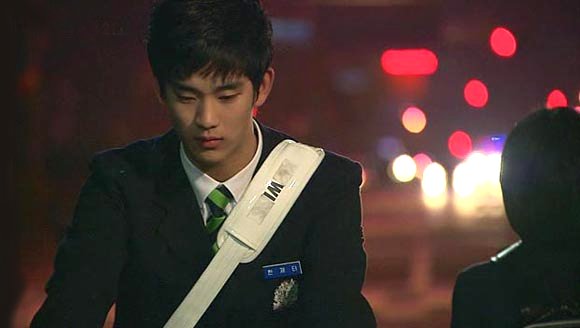 Look how young he looks in this 2008 drama:
I wanted to pinch his cheeks! LOL!

You could already see how comfy Kim Soo Hyun was in front of the camera. It seems to come easily to him. He was so young that I couldn't help but smile a lot of the time while looking at him. He was very good in this early role and had nice chemistry with Park Bo Young. Of course they couldn't make it a sexy relationship because they were playing students, but I still enjoyed watching them together. I'd love to see them re-teamed in future now that they are adults in their twenties. If you are Kim Soo Hyun's and/or Park Bo Young's fan be sure to check out Jungle Fish. 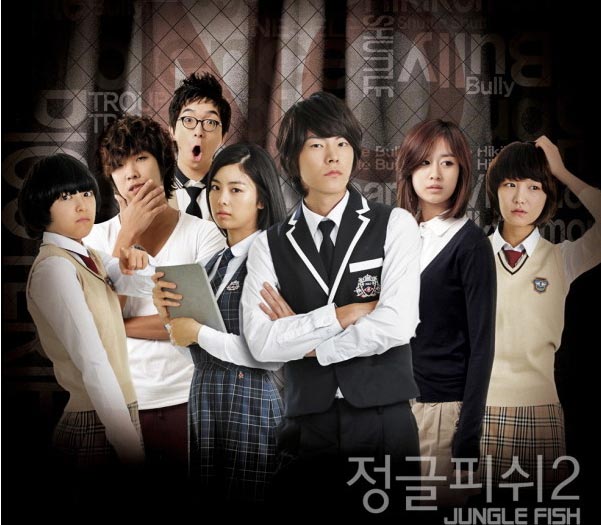 
Jungle Fish 2 is much more serious than Jungle Fish 1, because it has to do with a REAL suicide, and not one rigged by two student con artists like in the first drama. I watched it for comparison, but have to say that this series should be avoided by anyone seriously, clinically depressed. The female student who kills herself does so with an overdose of sleeping pills and as she is ready to pass out she even puts a sleeping pill into the bowl which holds her pet goldfish! Yikes! These are not images that troubled teenagers should be looking at: if you're a stable adult it's hard enough! 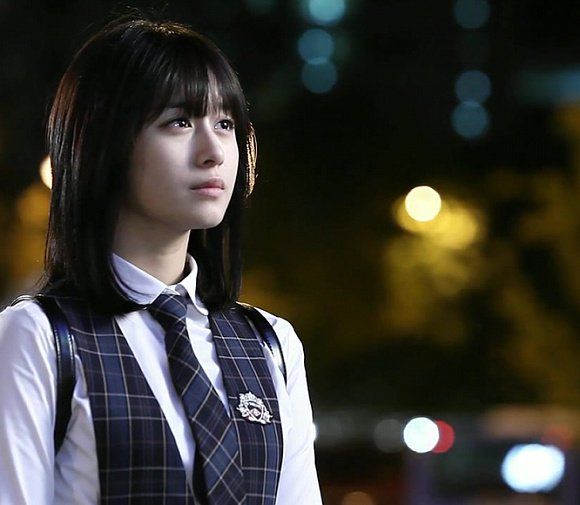 
I like the lead actor Hong Jong Hyun (playing Hosu) from Beloved, and I like the second male lead actor Ko Kyung Pyo (playing Il-Tae) from Operation Proposal and Tomorrow's Cantabile, and the pretty lead actress playing Hyo Ahn who commits suicide, Han Ji Woo from Twinkle Twinkle, and the second female lead, bubbly Shin So Yeul (playing Rai), who played Geun Young Moon's best friend in Cheongdam-dong Alice. They all acted very well in what is essentially a guilt story! I suppose Korea feels like they should call attention to the high suicide rate in their country, but I have to confess this kind of story makes me squirm a bit. I tend to see what the kids could have done differently to help prevent the suicide of their classmate in the first place. 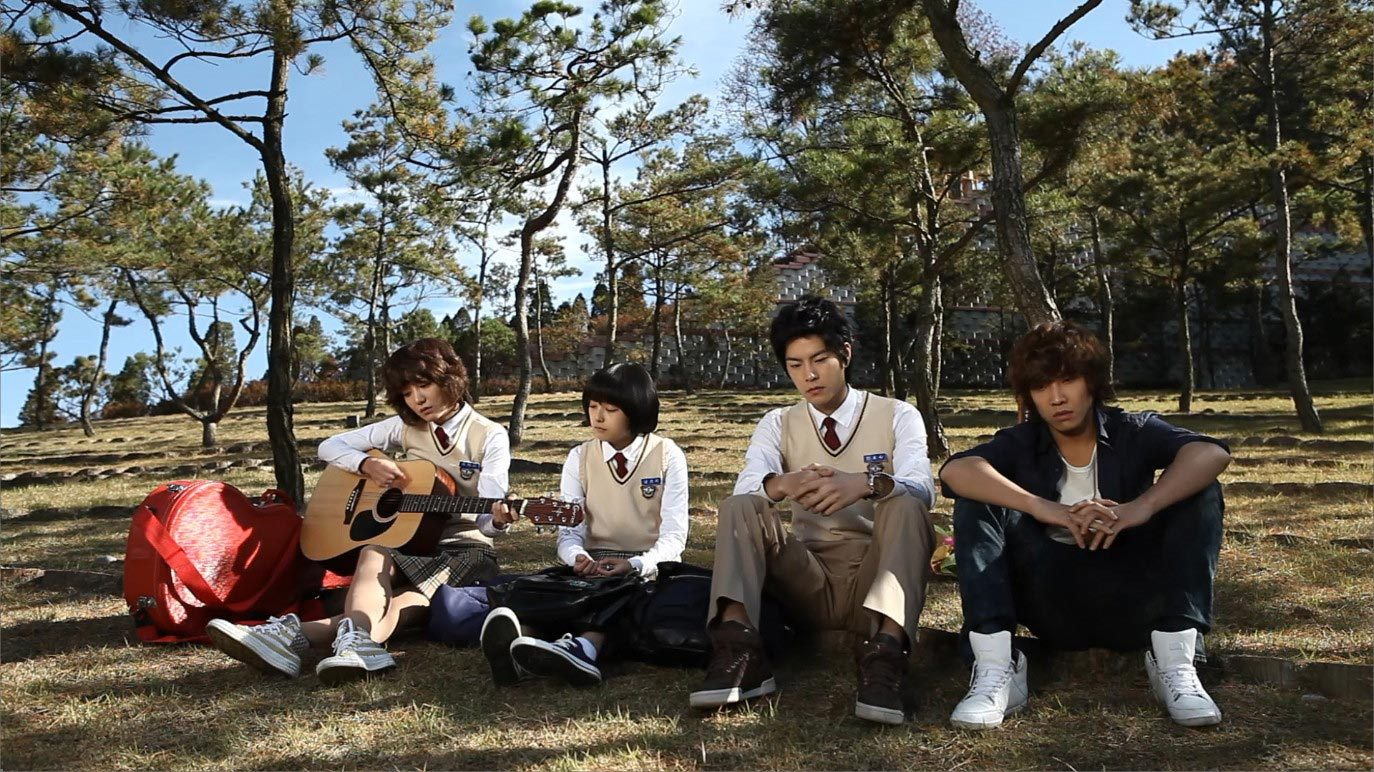 Many of the kids feel guilty when they hear of the suicide because they often didn't treat her nicely. She was an oddball, with the highest grades in the school but pretty much a social misfit (I called Asperger's though it was never specified), and they made fun of her. Her boyfriend broke up with her the day before quite cruelly. The students most affected by her death, the ones who knew her the longest, start to emotionally communicate on their computers via social media and privately on cell phones to confess their own past bad behaviors toward her. They eventually want to do something to commemorate her in a positive way, but are at a loss how to do that in a way that would not be maudlin. (I thought of a way: they could make a pact never to make fun of, or bully, another fellow student ever again!).

Jungle Fish 2 had a brighter outlook by the end of it than it had at the beginning, but the story was very dark to get to that point (also the music score, though beautiful, was rather oppressive, too!). I'm glad this series didn't go longer than 8 episodes: in fact, 8 was MORE than enough!