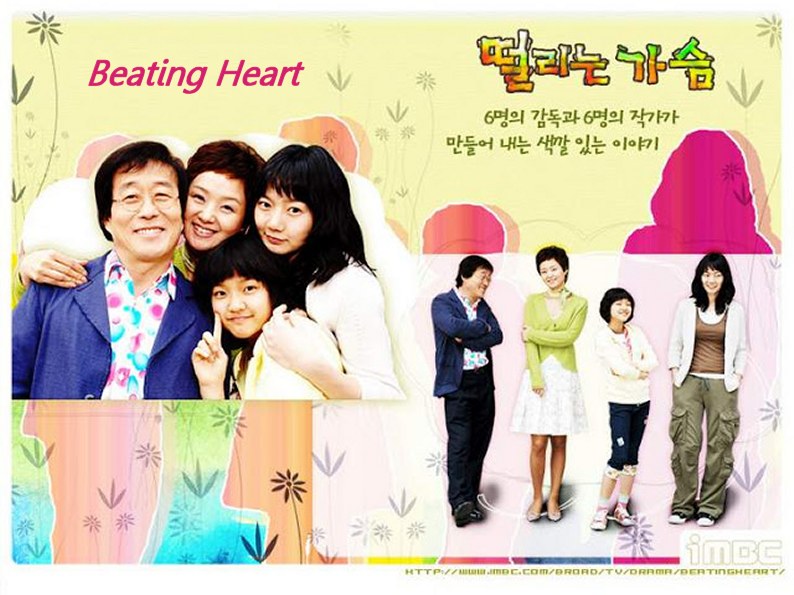 Six different love stories make up 2005's Beating Heart, an experimental short K-drama, each two episodes focusing on a separate love relationship, and each two episodes created by a different writer-director team. The drama explores the most significant moments and turning points of the individuals within one family. From love to sorrow to joy, the emotions covered run the gamut of possibilities. Bae Doo Na (Stranger and film The Host), drama veterans Bae Jong Ok (That Winter, The Wind Blows) and Kim Chang Wan (My Love From Another Star, Who Are You?), and amazing child actress Go Ah Sung (The Host) all star as the main family members. Also, a love story way ahead of its time focuses on the love of a mother for her son who chose a difficult path to become a transgender, from male to female. Her love for the child is unconditional, surprising all the other family members.

Actress Bae Doo Na's character keeps her own name, and this Bae Doo Na, at age 29, has no plans to fall in love again after her marriage at age 21 ends in disaster. She fell in love with an art student who married her on the rebound from the love of his life, and by the time Doo Na realized that he never really loved her he had already left, only three months into the marriage. Doo Na swore to never fall in love again, and it is only with the help of her family that she's able to get back on her feet and find a job at a record store. When kind, conservative businessman Kang Seong-jae (Kim Dong Wan) is drawn to the music she plays at the store (how can anyone resist Edith Piaf singing I Regret Nothing?), however, she finds her heart unexpectedly waking again to this handsome man.

But will Seong-jae, who loves her enough to consider marriage, be able to deal with her past in conservative Korea, where divorcees are often frowned upon as subsequent mates? When it turns out that Seong-jae's own father had performed Doo Na's hasty marriage years earlier, how can he possibly admit to his father that he now loves a woman who was married before?

Doo Nah's older sister Bae Jong Ok (the actress keeps her own name, too!), meanwhile, is a sensible but hot-tempered married woman, with a precocious daughter named Bo Mi (Go Ah Sung), who fell in love with her husband despite his simple naivete, and now finds herself something of a nagging wife, exasperated by his boyish zest for life. Kim Chan Wan (playing himself too!), her husband, is a decent and kind man whose only regret in life is giving up the music career he was pursuing in college in favor of a mundane job to feed his family. Right from the beginning there is strain in the marriage and though it's obvious they love each other, each meets a younger person they are drawn to romantically, and they have to decide whether their marriage can endure. (Ji Sung stars as the love rival for the mother's affections, and Choi Kang Hee stars as the love rival for the father's affections, and both of these stars were later to act together in the popular K-drama Protect The Boss). 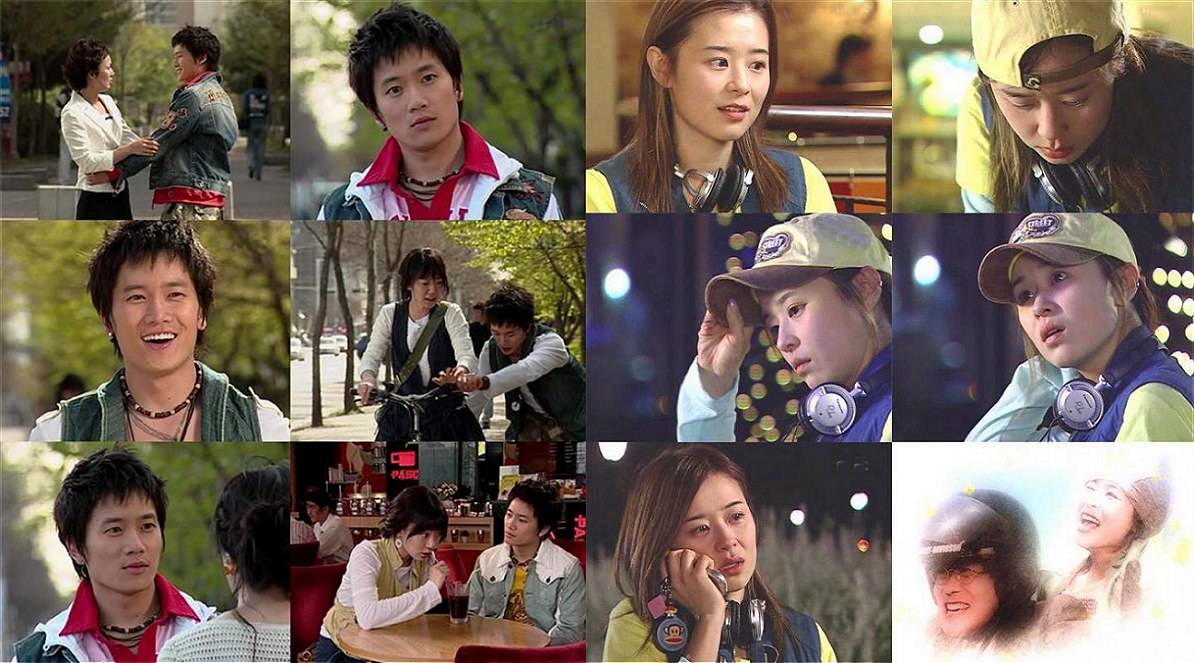 Their daughter Bo Mi too finds a little sweetheart named Chan (Kim Hak Joon) to love at school, whose parents are separated, and she even travels with him to see his estranged father in another city -- only to find a "father" who doesn't admit to his newly pregnant girlfriend that this boy is his own son! Bo Mi is able to help him heal from the shattering experience, but then his mother decides to leave the city and move away. Can the little sweethearts still be long distance friends? 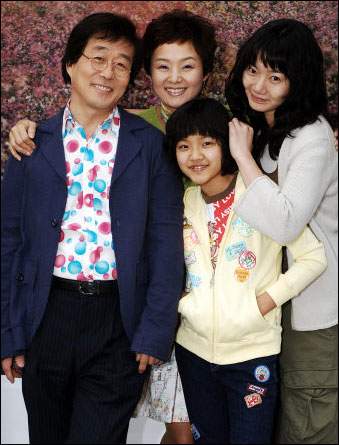 Beating Heart is probably the most realistic K-drama I have ever watched. This family could be your next door neighbors. They are both lovable and annoying at the same time, as most people are in actuality, if you were able to watch them 24/7 and see the good and the bad in them. It's extremely touching and heart-warming, and little moments of sweet humor are woven into the script to make these people seem like irresistible characters whom you won't want to leave by show's end.

I actually watched this drama twice in a row because I was so taken with it. I loved every single actor in the cast, even the supporting ones who had smaller roles, like actor - musician Shin Sung Woo ("Mama Shin") from Roommate. His character actually falls in love with the transgender "girl"! 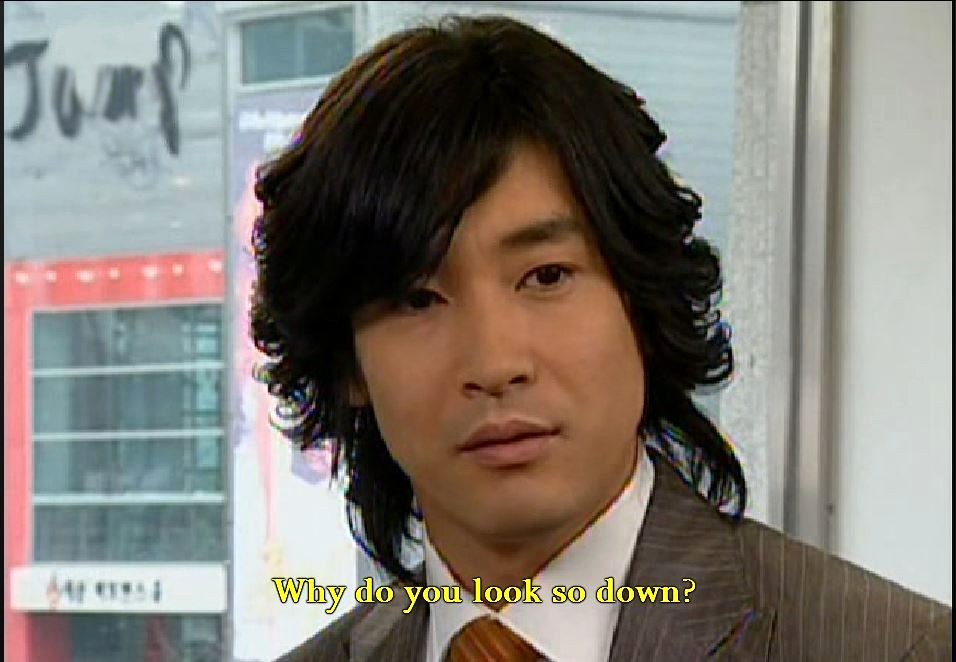 
The show is filled with delightful moments like the one below, where Bo Mi is down in the dumps because Chan has left town, and her father cheers her up with his love and humor as they go on a walk together late at night. "I'll make time stop for us right now!" he jokes with her and they both dance around each other and suddenly stop and stand still as statues. If only more fathers could be this attentive to their children today!

I wish more people would watch the shorter K-dramas like this one. They are missing out on so much beauty by avoiding them. Their loss and your gain if you watch them!