Hotelier (2001) is an old-fashioned saga centered on the fortunes of those working for the fictional upscale Seoul Hotel. The business is struggling against its five-star competition, and the family who owns it suffers a tremendous loss when their patriarch dies. The fate of the hotel becomes uncertain, until a wealthy lawyer / financier steps in to help save the day.

The Story: There are two love stories featured in Hotelier. One is between the hotel manager, Han Tae-jun (Seung-woo Kim, the betrayed nice guy from Miss Ripley) and Yun-hee (Hye-ko Song) the daughter of the main villain, a rich man named Bok-man Kim (Jin-hee Han) who wants to take over the hotel. The other romance forms between the tycoon, Frank Shin (Yong-joon Bae, famous for his bespectacled starring role in the wonderful Winter Sonata, and the main attraction of this drama), and a dedicated, ambitious hotel employee, Seo-Jin-young (Yun-ah Song). Your enjoyment of Hotelier will probably depend on how involved you become in these romances, unless you are overly interested in how a hotel operates.

Bae Yong Joon Speaks English
and Song Hye Kyo Cries ~
I think she does a fabulous job in this scene!

When President Choi (Hyun Joo, who has been in numerous dramas, including Love Story in Harvard, but seen only briefly here), the hotelier of Seoul Hotel, dies from a heart attack, his business is already in trouble. Bok-man Kim, an old friend — actually a “frenemy” --  has told him that his own company, Hangkang Distribution, has been buying the hotel’s shares in order to try to take it over. Choi’s wife, Bong-sook Yoon (Yeo-jeong Yoon, featured in the weird K-drama Ireland) who knows nothing of management, inherits the hotel and is determined to keep it out of the hands of predators. Since she cannot rely on her immature playboy son, Young-jae Choi (nondescript Jung-chul Park), to help her, she needs to recruit a solid hotel manager who can turn things around and make the hotel financially viable again.

So Mrs. Choi sends employee Jin-young to America to solicit the help of Seoul Hotel’s experienced former manager HanTae-jun. He had been forced to resign due to a scandal that was not his fault, but being a dignified gentleman, he accepted the disgrace and bowed out of the situation. He has taken into his care a young woman named Jenny, who has a troubled past is a recovering drug addict. Jin-young convinces her old friend and mentor to accept the job, and they both, along with Jenny, return to Seoul.

Meanwhile, Bok-man Kim has hired Frank Shin (Korean name Dong-hyuk Shin), a wealthy Korean-American lawyer and businessman to assist him in his attempt to acquire Seoul Hotel. Frank specializes in the merger and acquisition process, and knows all the angles. His main reason for accepting the job is a romantic one. By chance, Frank had met Jim-young when she visited the United States to ask for Tae-jun’s help, and he was instantly taken with her freshness and assertiveness (even though she is a bit on the awkward, clumsy side).
He agrees to work with Mr. Kim, but his real interest is in being close to Jin-young again. It will be his first return to Korea since he was a child, but he feels no sentiment about his native origins. Accompanying him is his right hand man, Leo; both men move into a chalet at the hotel to conduct their business dealings. At first, no one at the hotel knows anything about this mysterious rich businessman or his hidden agenda – which is to spy for and aid the enemy.

Through Frank, Mr. Kim learns how poorly Seoul Hotel is currently being managed, so he figures it is only a matter of time before he can scoop up a controlling interest and convince shareholders he can do a better job of it. Tae-jun is going to have his work cut out for him to bring the place back to high quality standards. Frank begins a very persistent courtship of Ji-young, who reciprocates his interest in spite of her reserve, and acts like an awkward teenager around him. Once she learns his true purpose for being at the hotel, however, she is torn between her feelings for him and her loyalty to her employer and to her old friend Tae-jun. The two men are naturally at odds, especially since it seems that despite Tae-jun’s efforts, the hotel will fall into the hands of Bok-man Kim. 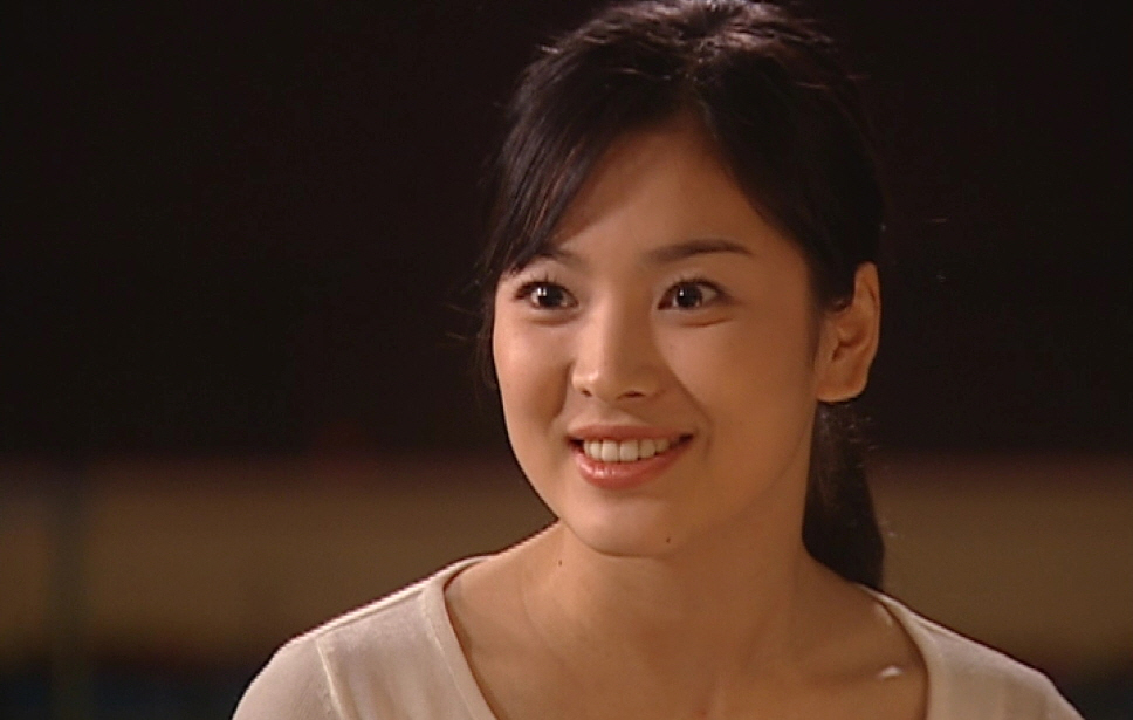 In 18 Years She's Hardly Changed At All

Then we have the other romance which, surprisingly, is more convincing than the primary pairing of Frank and Ji-young. This one involves a love triangle, as the young hotel scion Young-jae meets and instantly falls for the heiress Yoon-hee Kim, Bok-man's daughter, after meeting her at a nightclub. Since Yoon-hee is played by the perfectly beautiful Hye-ko Song, you have no trouble believing a man would fall in love with her at first sight and continue to pursue her despite her lack of interest. Yoon-heei is a melancholy girl who has been kept in rather a gilded cage and is not happy about it. Eventually, she wants to flee the tyranny of her father’s house, and Young-jae arranges for her to stay at the hotel, where she becomes increasingly attracted to kind, gentle, and chivalrous Tae-jun. Since he is uncomfortably aware of their age difference, and wary of engaging in any romance of any kind, he holds back from accepting her affection. So she is the one who pursues the relationship more than he.

Tae-jun, as the central protagonist, is also the moral center of this story. He is responsible for taking care of so many things, and so many people, that you wonder how he does not crack from the strain. Instead, despite being disrespected by Frank Shin and seemingly facing a losing battle to save the hotel, he generally maintains his cool dignity, with only some occasional flashes of fire.
Now we come to a typical Korean coincidence, as Frank learns that Tae-jun’s ward Jenny is actually his long lost sister. This realization softens him. Eventually, he and Jenny reunite with their father, and Frank’s ties to family and Korea are rekindled. Since he also loves Ji-young and knows how important her job is to her, he decides that he will help Seoul Hotel fend off the hostile takeover, working with Tae-jun to rebuild its reputation. At the same time, he keeps trying to whisk that stubborn Jin-young off her feet -- but this career girl is quite stubborn and it takes her a long time to acknowledge her feelings.

Hotelier is fun, reminiscent in some ways of the American TV series from the 1980s with James Brolin, called simply Hotel. You see guests come and go, and hotel events being planned, and hardworking employees in the background. If you are a fan of Yong-joon Bae (as I certainly am), you will be charmed by him here. Not only is he as rich as a prince, he is also polished, smart, sensitive and ultimately kind. The actor has a serious, somewhat shy, gentle persona and makes a superlative, thinking-woman’s romantic hero. He and Seung-Woo Kim as Tae-jun are the main attractions in Hotelier, as both actors in their very different ways portray men of great character and nobility. It is a relief when they finally stop being adversaries and join forces. Seung-Woo Kim is not to my mind what you would call handsome. But he has a wonderful warmth and chivalry, and his eyes glisten with intelligence. It is easy enough to see why a vulnerable young woman like Yoon-hee, whose own father figure is such a bully, would be drawn to a nurturing older man who treats her with such respect and tenderness. As already mentioned, Hye-ko Song is gorgeous, and she projects a great deal of sweetness, even if she is a bit stiff and bland in this role. Still, you cannot resist her; she is just innately appealing in any role.
My main difficulty with this drama lies with the character of Jin-young and her portrayer, Yun-ah Song. I found Jin-young to be petulant, abrasive, irritating and charmless, and could not understand why a worldly man like Frank Shin would find her so irresistible. I simply could not warm up to the actress either; she seems high strung and awkward, without a hint of grace. Character and actress struck me as simply too annoying to care about. 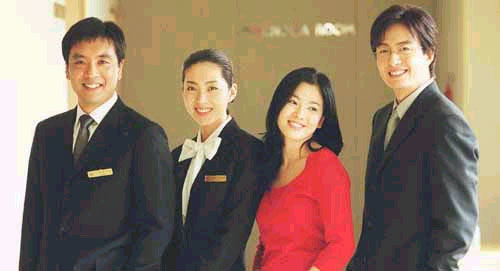 As the third wheel in the one love triangle, Young-jae, Jung-chul Park makes little impression; he is attractive, but would clearly never be a serious rival for Yoon-hee’s affections, even if he is better looking than Tae-jun. Heo Joon Ho (who would later play the sympathetic prison friend of Byeong-heon Lee in All In) is quite wonderful as an uptight hotel employee who starts a romance of his own with an unequally uptight female employee. Among the other supporting players, Young-min Choi, as Frank’s friend and colleague Leo, and Na-rae Kim as the vivacious Jenny, are also very personable and appealing. In fact, all the supporting players do a fine job creating genuine and distinct personalities and add credibility to the story.
Overall, the plot is interesting, though there is not a great deal of tension or excitement. The setting is glamorous; Seoul Hotel looks like a place you would want to stay.

Yet somehow Hotelier is not particularly deep or memorable. In comparison to so many superior dramas, this one is pretty lightweight, but it is still reasonably good entertainment – and it is another fine showcase for the charismatic Yong-joon Bae.