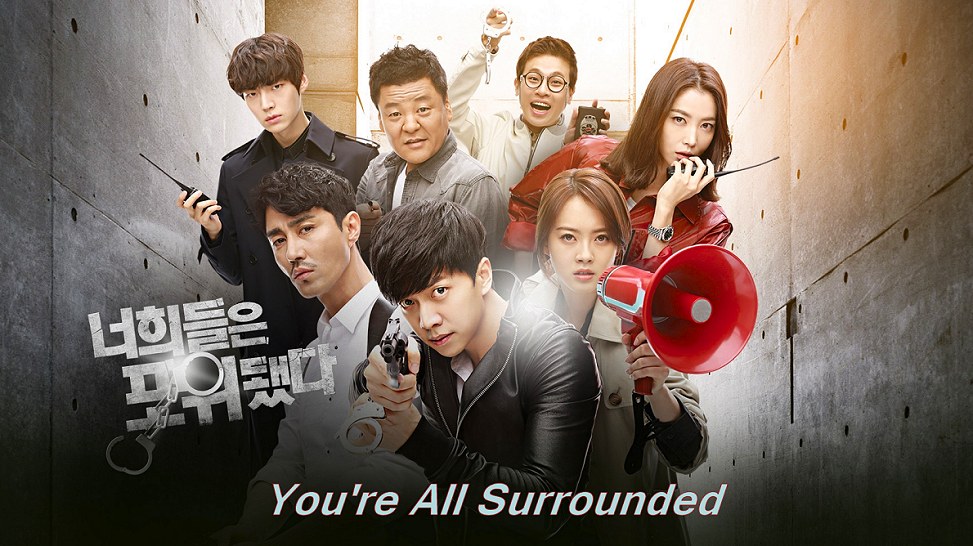 I decided to watch this Korean melodrama combination romantic comedy called You're All Surrounded (2014), focusing on police recruits learning on the job, because I loved the two main male leads in other dramas, and because it was added to Netflix so I could watch it in Blu-ray quality on my large screen TV. (Netflix quality is more like Blu-ray quality, whereas Dramafever's streams are more like DVD quality). I enjoyed the show to a degree but I felt it lacked good romances that would appeal to me, a female viewer. I think many times cops and robber shows are geared more toward the male viewers. None of the female leads did anything for me, neither did I see any real chemistry between them and the male leads. I don't blame the actors for this, they just follow a script. The casting director, the writer, and the director have far more to do with whether the personalities on the screen will actually go over effectively with the audience, or not.

For lead actor Seung Gi Lee, I think he has made far superior dramas than this one, including King 2 Hearts (2012) and Gu Family Book (2013) and My Girlfriend Is A Nine-Tailed Fox (2010) and Shining Inheritance (2009), so I would strongly suggest you watch those shows instead, or at least first, especially if you're female. There's no doubt of Ahjussi Lee's dedication to his craft: while filming an action scene on June 9, 2014, he was poked in his left eye by a prop knife, causing corneal damage and an interocular hemorrhage, which resulted in episode 10 being pre-empted while he recovered. The next week he was back on the job! For older male lead actor Seung Won Cha I would strongly suggest you watch him with Gong Hyo Jin in the 2011 romantic comedy The Greatest Love.

The show begins with a city car chase with all the interns and their Chief in one vehicle (what's the likelihood of that happening in real life?) chasing some bad guys who were deliberately blocking traffic in the heart of the city, they at one point chase them on foot and when they are cornered Seung Gi Lee's character Dae Gu Eun points his gun at them while his cohorts are yelling not to shoot. He does anyway, but it's apparently just a stun gun and the guys are knocked to the ground instead of killed. He is later disciplined for this (really??? chincha???). So this action is supposed to tell us how inexperienced a rookie he is. Then little by little we see all the stumbling of the other rookies who were recently hired: Soo-sun Eo (Go Ara), the only female in the rookie class, having tried seven different times to be accepted, Tae Il Park (Jae Hyun Ahn, who portrayed Gianna Jun's younger brother in My Love From Another Star), Ji Kook (Jung Min Park), an awkward and cheeky guy whose only reason to apply for the police force was because he wanted to live in the ritzy Gangnam district of Seoul, and he eventually becomes best friends with Tae Il, developing an unrequited crush on Soo-sun Eo. Their Chief, Pan Seok Seo (Seung Won Cha) often loses patience with these recruits, but has to keep his cool, even when extra stress is added to his life when his ex-wife Sa-kyung Kim (Yoon-ah Oh), a detective, re-enters his life and his specific police department as head of the Missing Persons Unit. Sa-kyung has a big interest in strengthening her department to keep other female detectives and cops from being unfairly discriminated against in their careers. In such a strong patriarchal society as South Korea she faces an uphill battle. 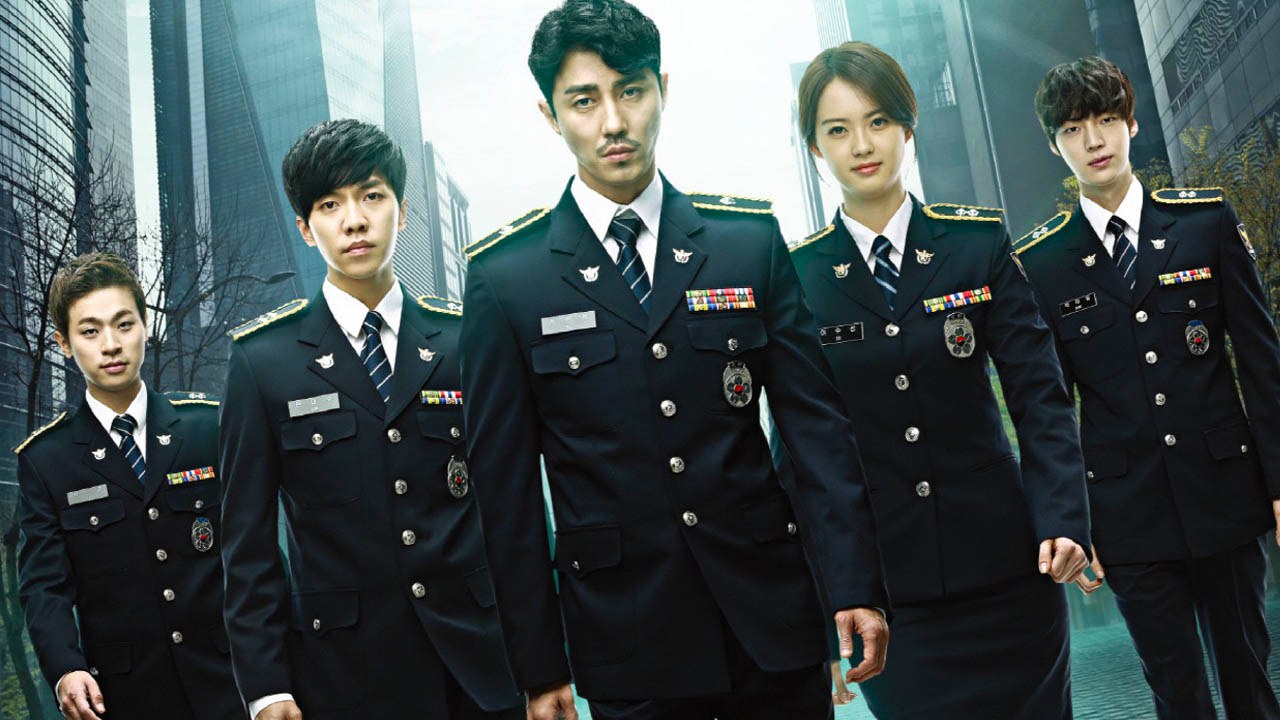 The reason for the divorce between the Chief Pan Seok and his ex-wife detective Sa-kyung had been her grief and anger when they had lost their young son as an indirect result of a case her husband had been working on, which also ties in with the childhood of police recruit Dae Gu (Seung Gi) because his mom had been scheduled to be a witness for that murder case and had been murdered herself before she could testify, resulting in Dae Gu having to grow up in an orphanage. As an adult male, Dae Gu secretly blames his own Chief for his mother's death and plans revenge against him, which was the main reason he joined the force to begin with. So Dae Gu is really a loose cannon who has much to investigate about his mom's death before he can act with some finality against his Chief. But what if his own Chief was a victim under the circumstances too? For years he had been haunted by the case. 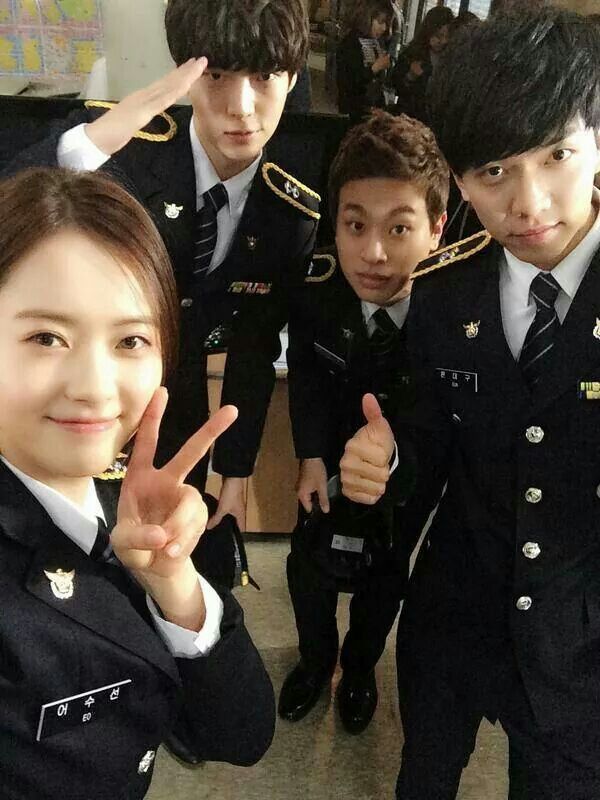 There are a lot of flashbacks in this series into the childhood and teen years of the characters, and as is usual in many K-dramas, their lives interconnected much earlier than when they meet again years later as adults. You're All Surrounded follows the journey of these young cops as they fumble, learn, fall in love, come to peace with their past, and find their way to becoming trustworthy people and citizens. It features many cute scenes and many fast-paced crime capers; I really expected more originality in this show, however, and I really wanted to see more chemistry between the two main leads; I think Seung Gi had far more chemistry with all the leading ladies of the shows I mentioned on this page earlier. So I will have to be honest and say I was disappointed in this show overall.

If you are a person who loves these kind of criminal justice shows then you will probably like it far better than I did. Just check it out sometime and see if it grabs you. This was my 131st Korean drama completed and I don't suppose it's possible to jump up and down about all of them. Everyone is different and has different tastes in entertainment. It's an okay show to me, but not one that I will watch again. (However, if someone turns on Seung Gi Lee in the ultra-fabulous King 2 Hearts again, with Ji Won Ha, I'm an immediate GONER and will watch transfixed until the end! ;) That's definitely my favorite Seung Gi Lee show of all! Don't miss it!