Created by the same production company that brought us the wonderful I Hear Your Voice (2013), with many of the same talents involved, and featuring two of South Korea's most sought after actors Park Shin Hye and Lee Jong Suk, who both won several SBS awards for their performances, Pinocchio (2014-2015) just couldn't miss. It's been a very big success in South Korea, China, and in America on the web portals. It was filmed in widescreen so it visually looks stunning. Production values were uniformly excellent.

Pinocchio should be labeled a revenge melodrama. Two young brothers, who see their family destroyed by lies from the press, each seek revenge in their own ways when they become adults, against the people who hurt them, one through legal means, the other through illegal means. To be sure, it had some comic scenes and sweet romantic scenes, but the underlying message is that a thirst for revenge can be handled in either of these two ways, illegally or legally, but the person who seeks the illegal means of revenge will end up suffering more in the long run, and the one who does everything on the up and up and honestly will be rewarded with success and happiness in the end.

The Ki family, after losing their firefighter father, is then maliciously maligned
by a corrupt reporter, Cha-Ok Song, simply for ratings

The Story: In the year 2000, Ki Ha-myung (actor Nam Da-reum from The Suspicious Housekeeper when young, Lee Jong Suk as a teen and adult) is leading a happy life with his parents and older brother Ki Jae-myung (Shin Jae-ha when young, and Yoon Kyun-sang as an adult), until his father Ki Ho-sang (In Gi Jung from Doctor Stranger), the captain of the firefighting squad, dies in a factory explosion during a rescue attempt, along with several of his men. When Ho-sang's body is not found, the media and especially the cold hearted reporter Cha-Ok Song (Jin Kyung from It's Okay, That's Love) sensationalize the case by lying about him for ratings, claiming that he abandoned his post and ran away, leaving his men to die. MSC reporter Song Cha-Ok alleges that Ho-sang is currently in hiding.

This causes the Ki family to become outcasts in their neighborhood and objects of national scorn. Ha-myung's mother kills herself by jumping off a cliff taking little Ha-myung with her, and older brother Jae-myung blames their deaths on the media, best replica watches particularly Cha-Ok, and vows to kill her. All this is watched carefully by reporter Hwang Gyo-dong (handsome Lee Pil-mo) who has a conscience and whose motto is Truth Can Change The World. What happened on the cliff is something he will never forget. 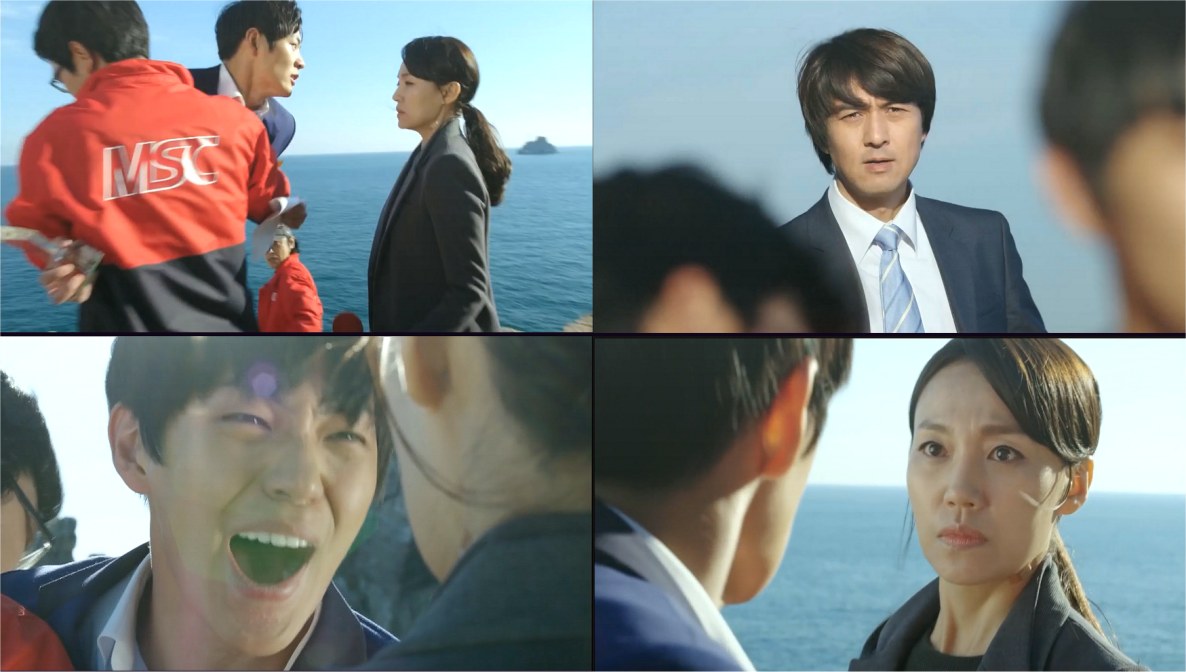 "Aim the camera at the dead kid's shoe."
Poor Jae-myung loses it against evil reporter Cha-Ok on the cliff where
he is told his mother and brother had jumped to their deaths

However, Ha-myung survived the jump into the water, unknown to his brother, having been rescued from the water by Choi Gong-pil (veteran actor Byun Hee-bong), a kind elderly man who lives on Hyangri Island. Gong-pil, who seems to be going senile, believes that Ha-myung is his older son Choi Dal-po, who had died thirty years earlier at sea, and so he re-names him Dal-po and calls him his son. Ha-myung, who has no one else in the world since he believes his older brother ran away after the attack on his family, embraces the deception and treats Gong-pil as his father.

Do Fathers' Sins
Pass To Their Sons?

Five months later, when Gong-pil's younger son Choi Dal-pyung (funny actor Shin Jung-geun) moves to the island with his daughter Choi In-ha (Noh Jung-ui when young, Park Shin Hye when older), they are shocked to be told by Gong-pil to address this new boy as their "older brother" and "uncle". In-ha has "Pinocchio Syndrome," which causes her to hiccup whenever she tells a lie. (Disclaimers at the beginning of each episode tell us that this is not a real syndrome). In-ha's mother just happens to be the corrupt reporter Cha-Ok Song and she abandoned her daughter after a divorce. (This woman is a piece of work, let me tell you!).

In-ha hates living on the island; there is not even a working television for her to watch her favorite shows on (her father is very over-protective). Dal-po and In-ha try to build a friendly relationship after a bumpy start, but when Dal-po learns that her mother is the corrupt news reporter who destroyed his family, he spurns her instead and she has no idea why.


Five years later, the shaggy haired teenager Dal-po and pretty and popular In-ha are now senior classmates at their small-town high school. Dal-po, who is actually a genius, pretends to be stupid (like the deceased Dal-po apparently was) and is last in his class. Dal-po and In-ha secretly like each other but cover up and deny their secret well for a long time.

Dal-po agrees to join a televised quiz show with a classmate who is first in the class, and he ends up winning, to the amazement of his classmates who are watching on television. At the TV studio, Dal-po runs into the show producer Hwang Gyo-dong, who had been the reporter on the cliff that day with his brother, but he had changed his job after what had happened to the Ki family. Dal-po remembers him though from the day his family was grilled by the press after their father's disappearance. 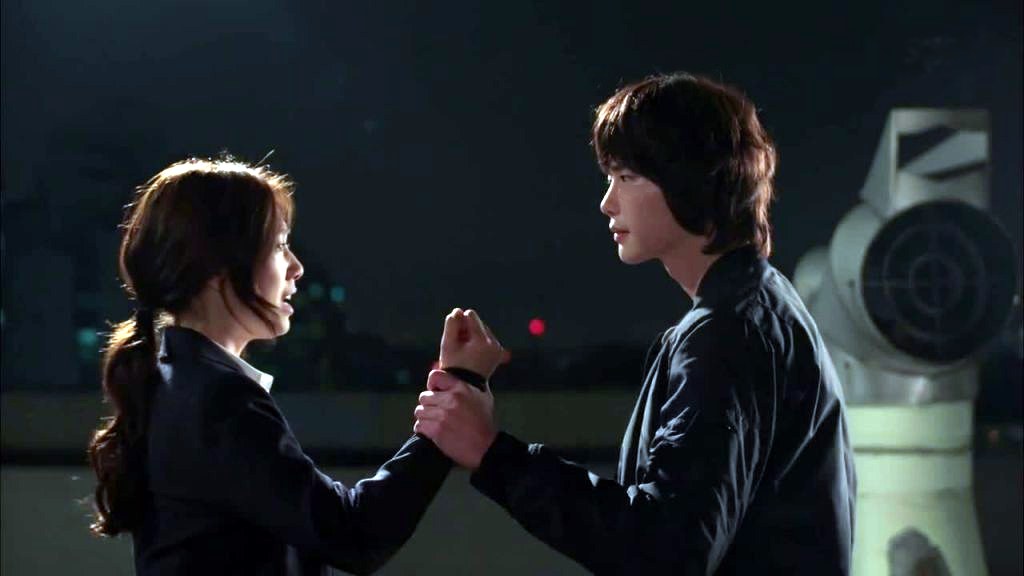 Meanwhile, despite knowing that her Pinocchio Syndrome limits her career choices, In-ha decides to become a journalist, and Dal-po agrees and says they should work together in journalism; after interviews, they both end up being hired at two different stations, and the station In-ha works at is where her estranged mother works. Cha-Ok barely acknowledges her own daughter. She's just using her as a ploy to help failing ratings at the station: "You can trust us since we have a Pinocchio reporter on staff. She cannot tell a lie!".

Dal-po ends up at the station where Gyo-dong works, so In-ha and Dal-po are essentially competitors. It's not long before Dal-po admits to Gyo-dong his real identity and that he has entered journalism to discover the reason why his family was destroyed and to get even professionally with Cha-Ok who had primarily caused his family's tragedies. He also wants to find his older brother Jae-myung and clear their father's name. The Choi family moves to a big city for the careers of their kids. Dal-po's father takes him shopping for a new suit and a new haircut, so that he is transformed. No more scruffy teen look! 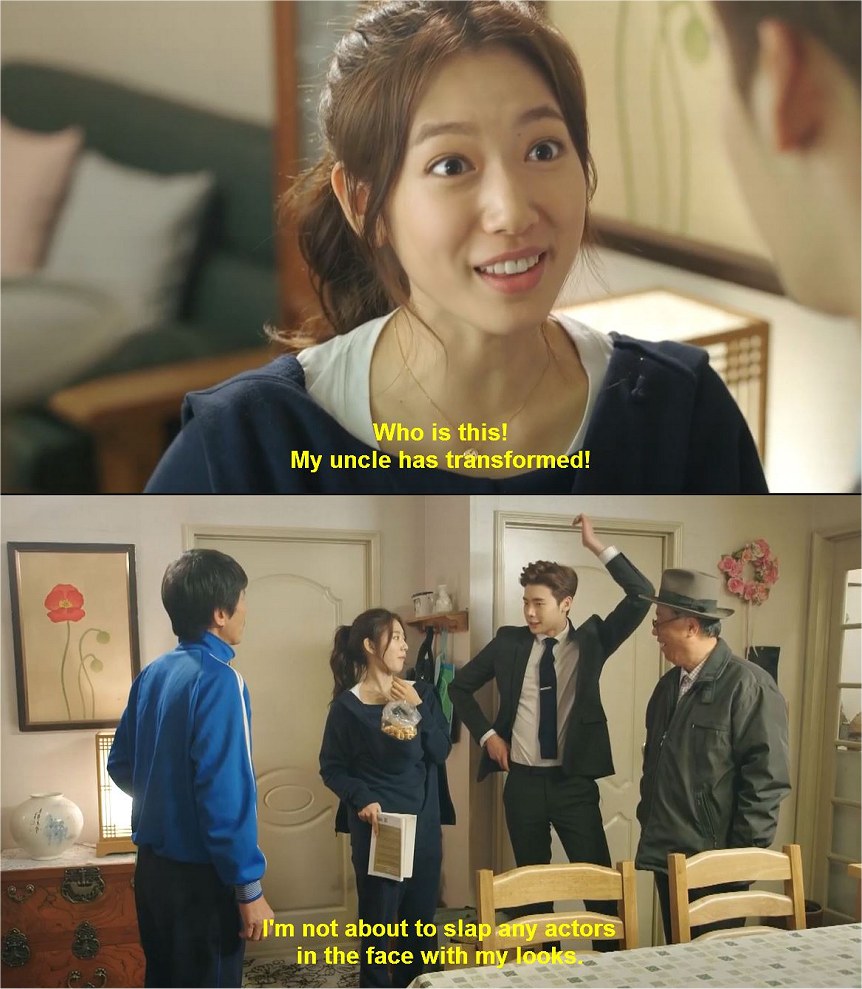 Meanwhile, Jae-myung, who has been working a menial job at a water delivery service, has taken revenge on the factory workers who lied about his father's death; he murders all three secretly after his father's body is finally identified by DNA at the explosion site years later. By a stroke of coincidence Dal-po meets up with his brother through a fender bender situation and through texting they agree to meet by a Christmas tree so that Dal-po can pay this stranger for necessary car repairs. When they meet up for the first time in years Dal-po immediately recognizes his brother Jae-myung but Jae-myung does not recognize him because he was so little the last time they had been together. He holds off on informing his brother about his true identity; his sixth sense as a reporter makes Dal-po feel his brother might be hiding something, so he covertly follows him home to his apartment to note down his home address. 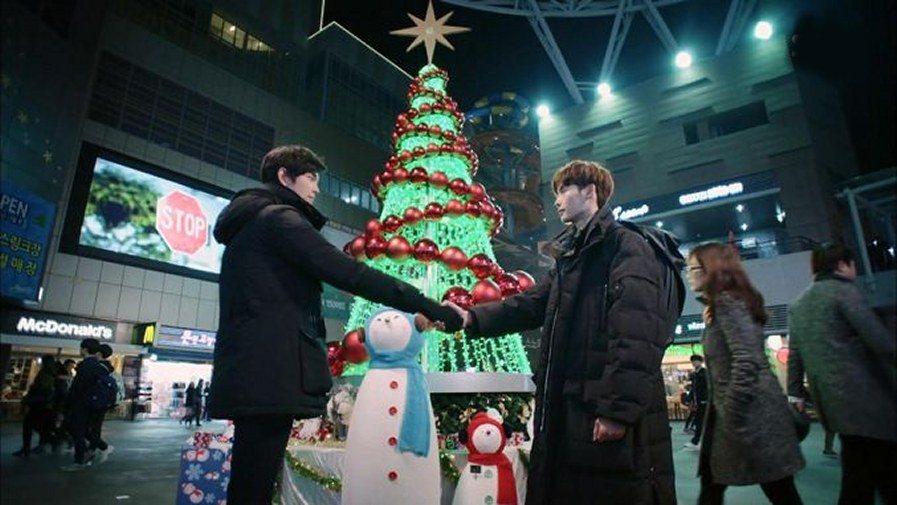 Two brothers meet after 13 years ... one a murderer, one a reporter ... will anything positive come of their reunion?

Among Dal-po's and In-ha's professional colleagues are Seo Beom-jo (Young Kwang Kim), who comes from a rich, sheltered chaebol background and has a connection to In-ha via a wrong cellphone number, and Yoon Yoo-rae (Yu Bi Lee from Gu Family Book), once an musical idol fan, who now uses those obsessive traits in her new job as a reporter. (It's so cute how she and colleague - superior Gyo-dong start to grow closer). I loved that Gyo-dong, he was a dream! So reticent and gentlemanly. We need more men like him in the world today, that's for sure!

Beom-jo develops a crush on In-ha but she never encourages him. He has a mother named Rosa Park (played well by veteran actress Hae Sook Kim from I Hear Your Voice and many other dramas) who owns a department store chain and she has a lot of secrets, including a rather heinous connection to the cold and calculating reporter Cha-Ok. However, secrets don't remain secrets for very long in K-dramaland! Beom-jo uses his new found reporter skills to bring down his own mother! Will Cha-Ok be able to dodge yet another bullet when this woman falls?

After In-ha discovers Dal-po's real identity and hears his family story they both move to try and get justice for his family, even if it means Cha-Ok has to pay a price. Dal-po also tells his brother his real identity and the love is still there and very strong between them. Eventually Dal-po convinces Jae-myung to give himself up, but not until Jae finagles an interview with Cha-Ok on the television news and confronts her about her lies and subterfuges as a reporter related to his family tragedy.

Through all this Dal-po and In-ha confess their feelings for one another, much to the initial dismay of their fathers. Will they ever receive their approval to wed? 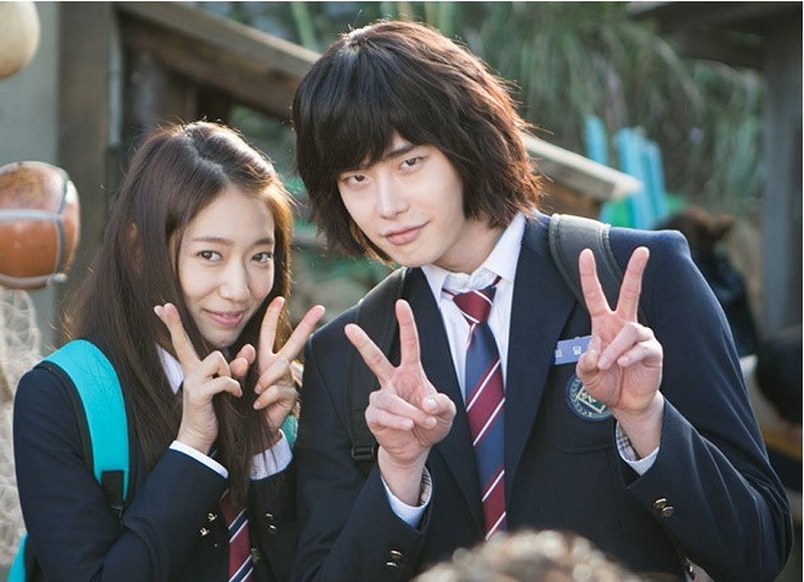 Pinocchio has many marvelous scenes, both suspenseful and romantic, bittersweet, and fanciful. I enjoyed it very much and can strongly recommend it. There's even a cameo scene (in episode 12) by actor Yoon Sang-hyun as Cha Gwan-woo, Jae-myung's public defender. He plays the same attorney Cha character he played in I Hear Your Voice. It was wonderful to see him again. As of this writing he is supposed to be getting married to .... Maybe. ;)  I wish him a long and happy life with his bride! Also, another tidbit of cute information, the voice of the amusing female GPS guide you hear in people's cars is none other than actress Lee Bo Young, Lee Jong Suk's leading lady in I Hear Your Voice who is pregnant and soon to give birth in a few months, as of this writing. I really got a kick out of hearing her voice on the GPS, often in funny ways!

Pinocchio really felt like Old Home Week as I watched it. If you loved I Hear Your Voice then don't miss Pinocchio.