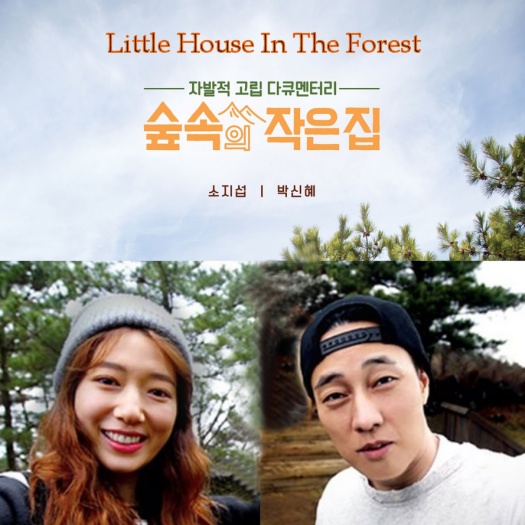 Little House In The Forest
tvN (Winter / Spring 2018)
10 Episodes 90 Min Each
Reality Show, Grade: A+
Review by Jill, USA
The Biggest So Jisub Fan In The World

I didn't read up on this reality show, Little House In The Forest (2018) at all before I started it, I just plunged in not knowing what to expect, simply because two of my favorite Korean stars were in it, So Jisub (I'm Sorry, I Love You, Master's Sun) and Park Shin Hye (Tree Of Heaven, Flower Boys Next Door), although as it turns out they had only one "scene" together, and nearer to the end of the show than the beginning.


Subject A and Subject B Meet


I already knew Park Shin Hye had been in a musical video of So Jisub's a number of years ago, together with Seung Ho Yoo, so they weren't exactly strangers to each other. Still I kind of wish we had seen them together more than we did. Both were only one hour's walk away from each other on Jeju Island, in separate cottages because they were not married (unlike the somewhat similar themed Newlywed Diary with then married actors Gu Hye Sun and Ahn Jae Hyun spending time in a rustic cabin), so I had hoped they could have gotten together more and shown support for each other during their hard months roughing it. The one time they were together Park Shin Hye made an elaborate meal of kimchi pancakes and So Jisub chivalrously brought her firewood he had cut up for her to use in her stove. They really looked like they enjoyed each others' company.

This show proved utterly delightful, and often ironic and funny as well. Another thing I enjoyed about this show was all the cute and pretty classical music they played in the background (OST listing at the bottom of the review page). I mean, you just haven't lived until you've seen a herd of cows marching along to music from Bizet's opera Carmen! LOL 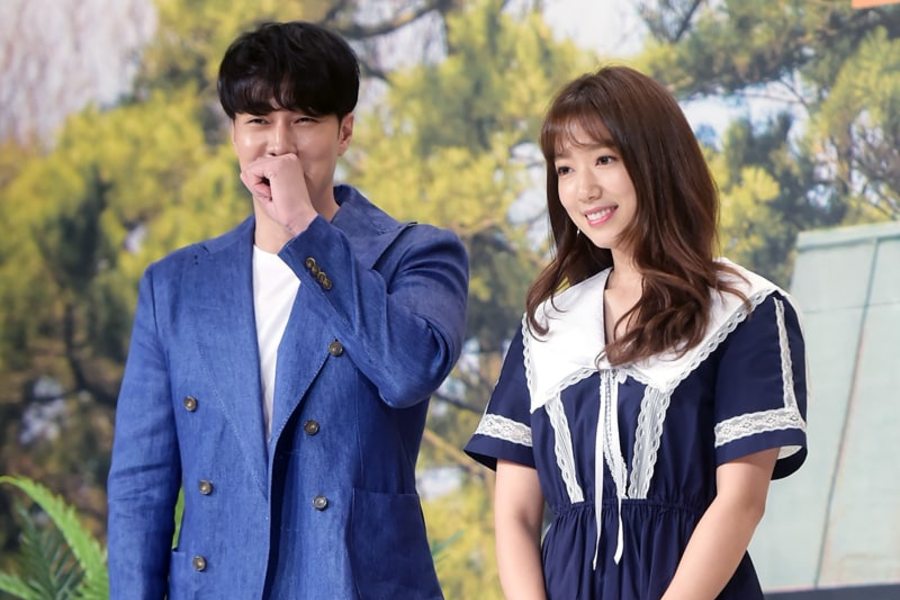 
I was really surprised how rustic a life the two stars were living for several months while shooting this show, especially considering that both these actors are multi-millionaires and own luxurious homes! You have to praise them for even agreeing to do this at all. Their cottages didn't have bathrooms (I suppose they used outhouses, and in the dead of Winter and early Spring couldn't have been pleasant!), they didn't have showers, didn't have running water in their tiny kitchen area sinks. (They used big canisters of water they brought with them to cook and to wash dishes). There was only one room in each cottage, with a loft where they slept. There was no central heating, though there was solar power for simple electricity and lighting (but if several overcast or rainy days occurred their power could go out completely!). They each had a small fire stove to keep warm and to cook meals on. They had to cut their own firewood. It was not easy. 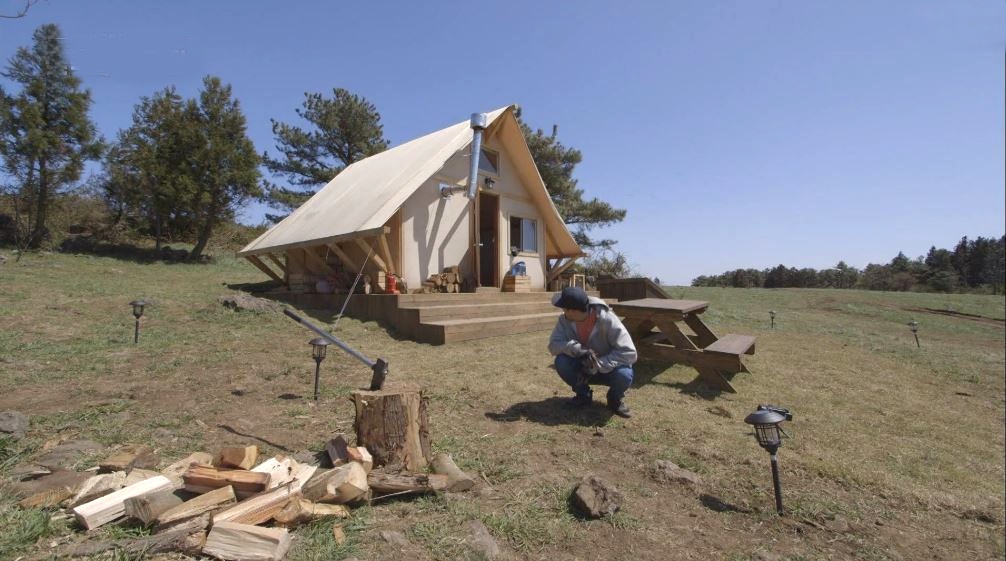 So Jisub Outside His Cottage
Tired From Cutting Firewood 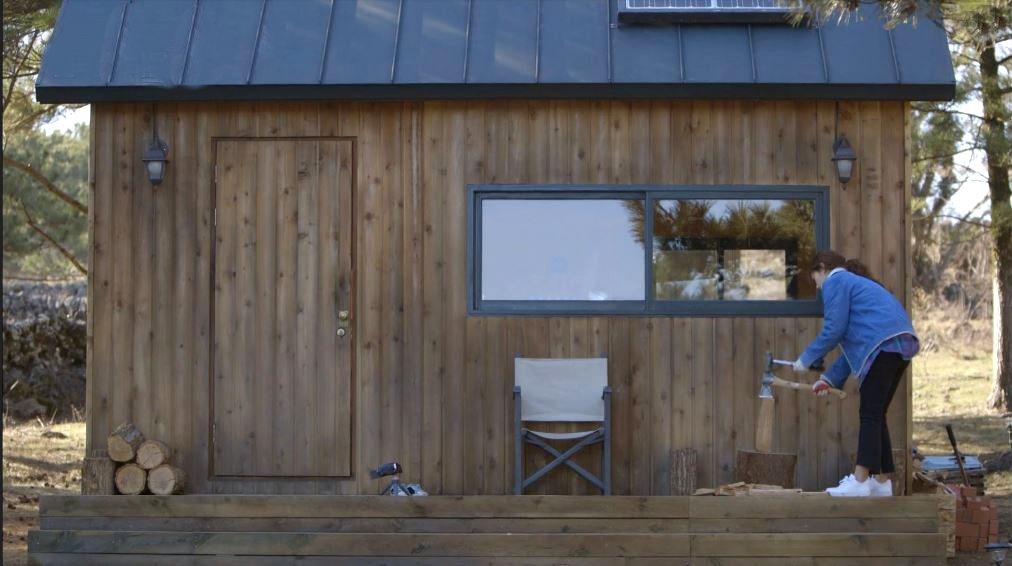 
They did have a spartan crew and a cameraman each, but we never get a glimpse of them during the course of the show, until the very end credits. Each actor had laptops with them, and each day they would receive a "mission" order from "headquarters" telling them of some craft they should make, or some nature skill they should endeavor to achieve. Their names were never used. Park Shin Hye was called Subject A and So Jisub was called Subject B. (You get used to this quickly but it was funny at first).

I watched with my daughter Jackie and we got a lot of laughs out of studying the actors up close and personal, noticing their different choices of adapting to their new rustic lifestyles, and the differences in how they approached their "missions" each day. For instance, when a "mission" was given to them to do something to personalize their cottages Park Shin Hye spent hours painting a beautiful nature border around the front windows of her cottage, and So Jisub walked around for an hour thinking and thinking and thinking of what he could do ... until he finally decided to simply paint a smiley face on a cut up log on the front porch! How we roared with laughter at that! Or when a "mission" came through for them to create their own arts and craft projects using simple objects they could find around their cottages Park Shin Hye decided to make an elaborate bird house made of twigs and rope, and So Jisub, again having no clue what to do, simply moved some bricks into a pattern on his front porch ... right by the smiley face log! LOLOLOL HILARIOUS! "Isn't this so typical of the differences between men and women?" I said to my daughter. 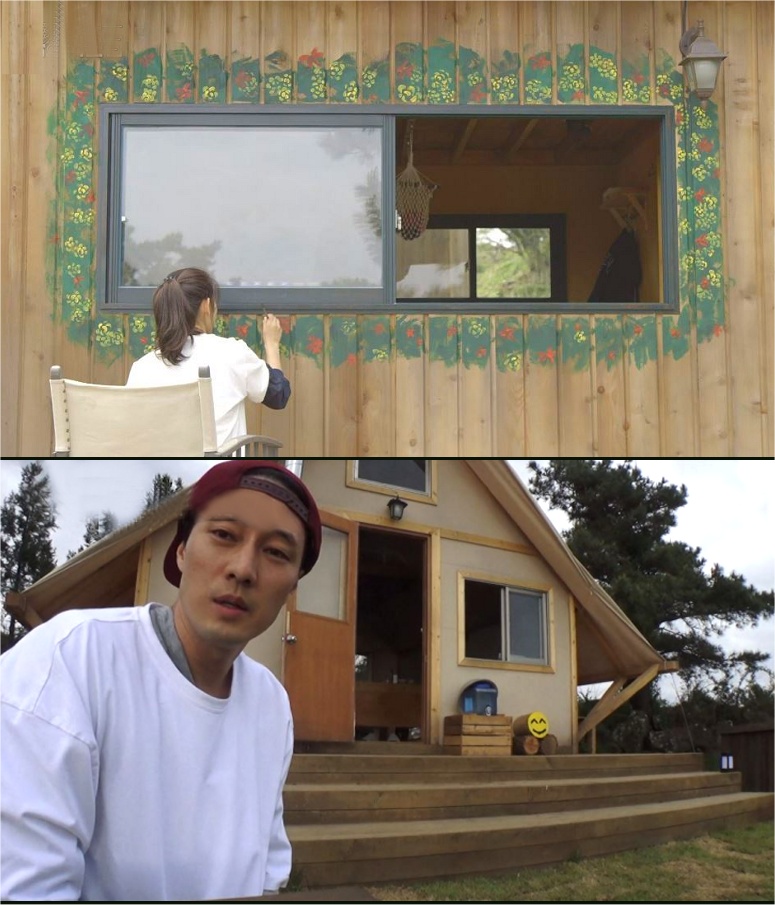 The Difference Between Men and Women :)


Occasionally we got some beautiful vistas of Jeju Island, where both cottages were located, like when both actors were told to hike up a mountain to watch the sunrise and they had to wake up at 4:30am in the bitter cold to start the process! I often wondered, since they were only an hour's walk away from each other, why So Jisub got so much more rain at his place than Park Shin Hye did at hers? Or why the same white dog wearing a collar kept showing up at their two places, and they both called the dog the same name, Bong? Maybe it was a crew member's dog but no one ever informed us if that was the case. I guess we were to assume it was just a wild dog roaming the hills and forests? And another amusing detail: the same herds of cows seemed to appear randomly at both their cottages, sometimes even at the same time of day. Can cows walk that fast? LOL 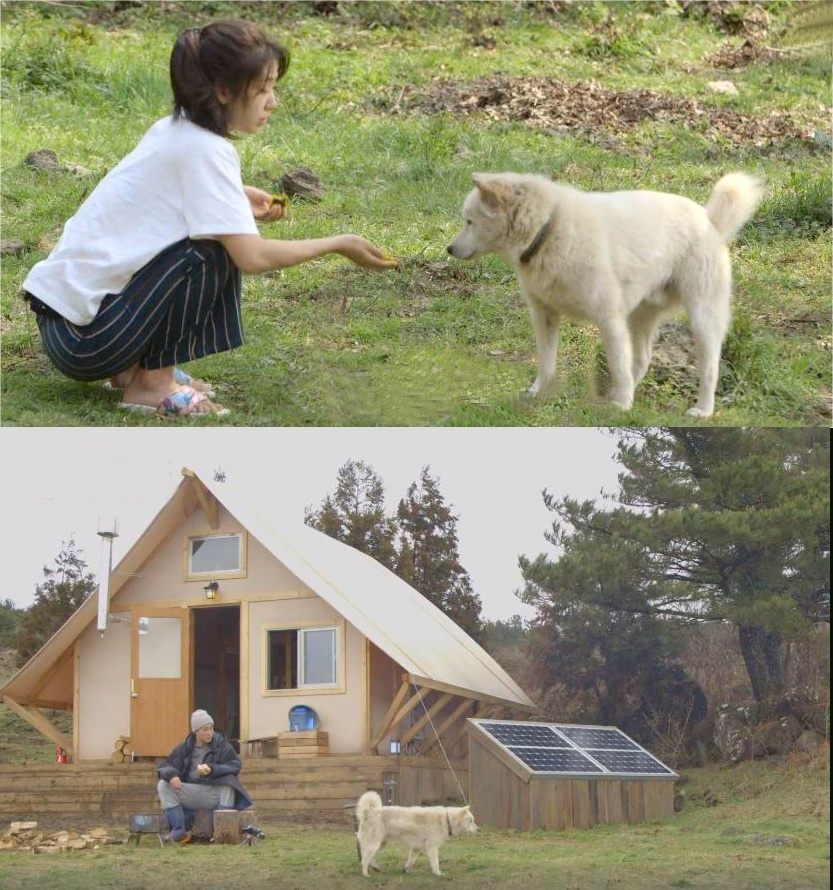 Bong Sure Got Around!


A lot of time was spent on cooking. Here I felt they weren't really roughing it all that much. They had ice boxes with them and plenty of meat and veggies and fruits and dry items like rice, soup mixes, and ramen noodles, so that wasn't really that rustic. Real rustic meal preparation would have involved hunting but I guess even in Korea that wouldn't have been politically correct. I laughed when So Jisub even brought a small bottle of ketchup from home. (He eats ketchup on scrambled eggs, ew no!!!!!!). LOL

One challenge that So Jisub clearly excelled at, besides the wood cutting, was when the "mission" came down that they couldn't use their cell phones for half a day and a whole night. Park Shin Hye went nuts that she couldn't call her Mom, and paced around and around at a loss for what to do, but So Jisub just pulled up a folding chair and went to sleep early. LOL!!! 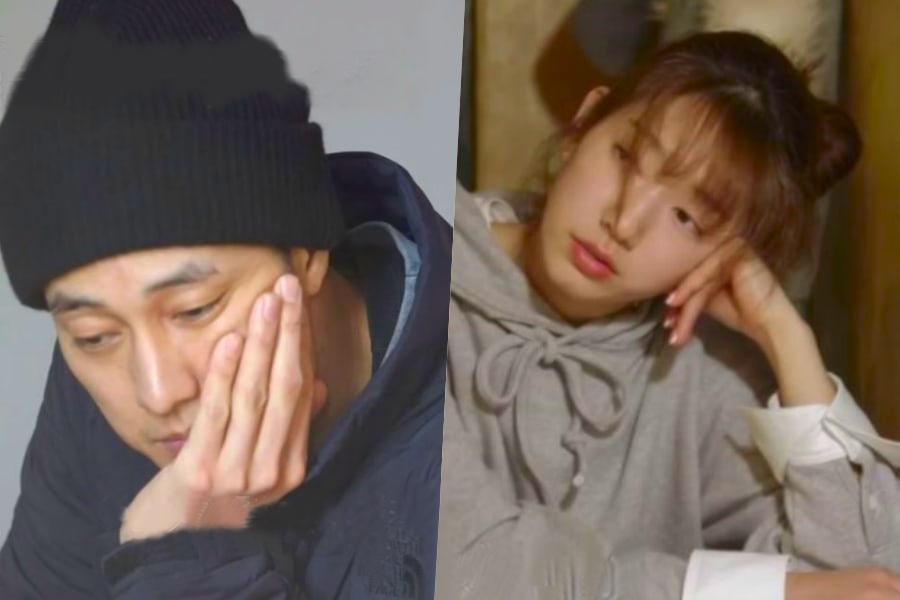 To be sure, there were long stretches where the actors would be bored and restless, and I guess "headquarters" would sense that and they would quickly come up with some new challenge to keep them active, like taking a hike to take various pictures of nature, find colors in nature to match a rainbow's colors, or to record different birds and their sounds. Some of those "missions" were actually the most educational for the audience to watch and enjoy. 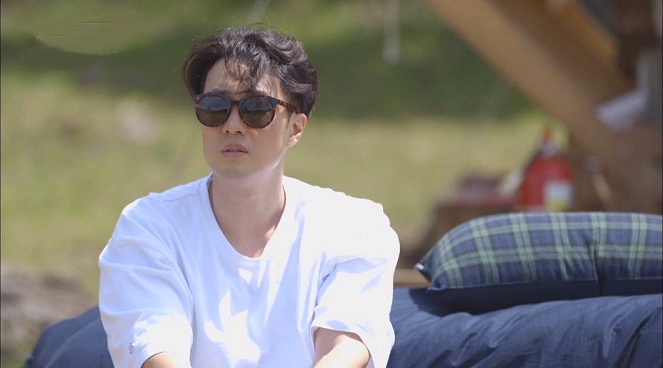 Quick! Take a Snapshot!
One of the Few Moments
So Jisub Isn't Wearing A Cap!


Another funny thing for me was to see So Jisub hardly ever take his caps off. I think during the entire show there were only about four or five scenes where he took his cap off and we could see his beautiful thick hair -- but then within a minute or two back the caps would go on! Sometimes he even looked fat because he had so many coats on to keep warm, especially in the winter segments. Brrrrrrr!!!!! But even if someone didn't know ahead of time that So Jisub is an introverted soul, they would be able to tell it from watching this reality show. He lets it slip occasionally, for instance mentioning he's spent many years alone, or when he mentioned that "not much makes me happy". Awww! I did feel a little better though when he said he's happiest after a good day on a drama or film shoot, that he can go to bed content, but still, that doesn't really take the place of happiness in the company of someone you love.

For a week I could watch my favorite actor up close and personal in this show, without the artifice of a drama or movie script he could hide behind. He was just himself, and fascinating to watch nevertheless. Park Shin Hye was just as I knew she would be, mostly smiley, bubbly, upbeat and positive, by far the most creative, and definitely more of a social animal than So Jisub. 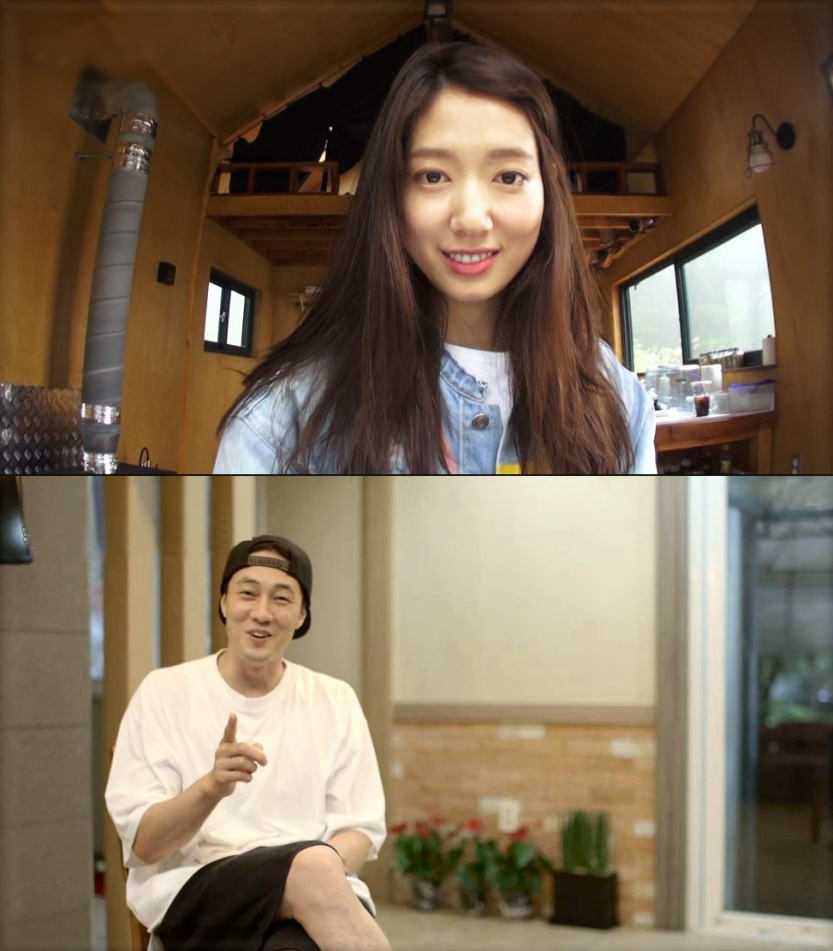 Bye bye Subject A and Subject B!
Till Next Time!


I usually give a show my highest grade of A+ if I know I would watch it again in a heartbeat. Little House In The Forest is such a show. Already, only three days after concluding it, I miss it like crazy. Maybe someday Subject A and Subject B will make a drama together. How I would love for that to happen. :)

Great cinematography of nature, Jeju Island, wonderful music, and fun life lessons are plentiful in Little House In The Forest. Don't miss it, especially if you love these actors. Enjoy! 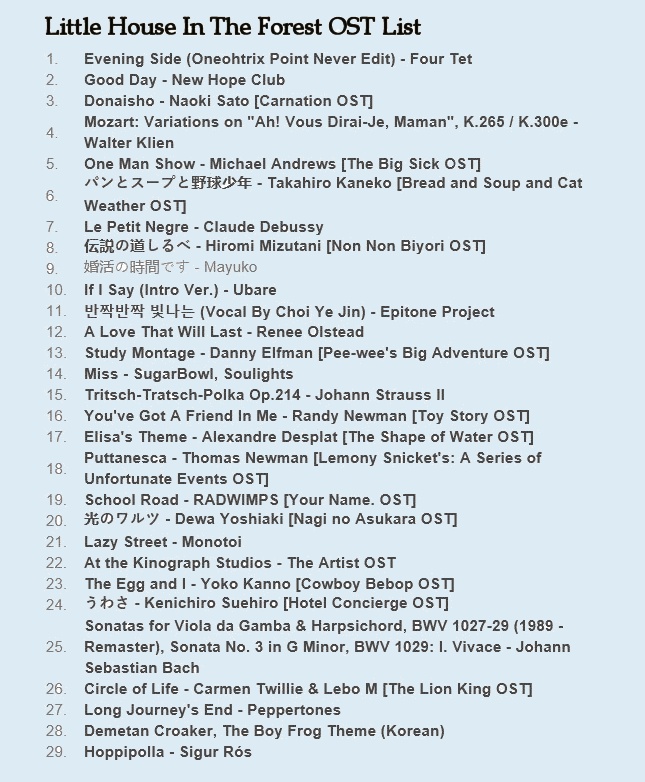