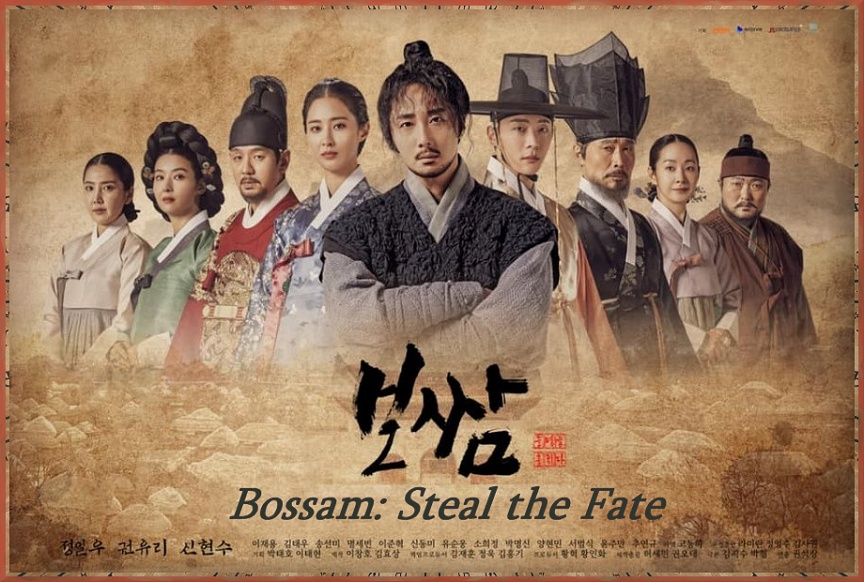 A completely addictive concoction of adventure, romance, and royal intrigue, with utterly gorgeous cinematography, this historical Korean drama (sageuk), set in the Joseon era under the reign of King Gwanghae, titled Bossam: Steal The Fate (2021), marked the ten year anniversary of private cable channel MBN's K-drama productions, and it became its top-rated drama when it aired, which was well-deserved. The term Bossam referred to a rather bizarre practice in the early and middle Joseon era of kidnapping widows (who were not allowed to officially remarry) and bringing them surreptitiously to unmarried men who desired them and could attain them as brides in no other way. Some kidnappings were done by private consent of the parties involved, but many others were forced. 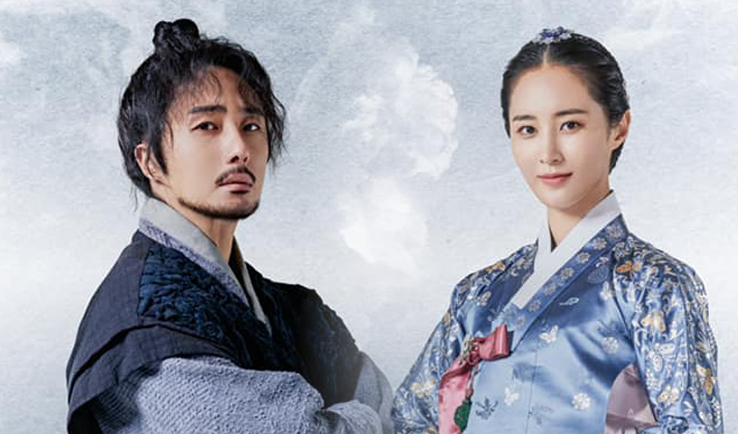 
Headed up in the cast by fantastic actor Jung Il Woo, who had played the unforgettable "Scheduler" in the classic masterpiece 49 Days a decade earlier (still in my Top Five Favorite K-Drama List of all time!) I knew the instant I saw his name in the cast list that I would watch it. He's so dynamic an actor that it's impossible to remove your eyes from him whenever he's on screen. He is joined by the lovely Kwon Yuri (of Girls' Generation K-Pop group and the dramas Neighborhood Hero, Sound Of Your Heart) as his leading lady, and I was much impressed by the maturity of her performance in this one. She delivered perfection in every scene. They had excellent chemistry together and I was hooked by episode one. Second male lead was dapper, but strong in martial arts Shin Hyun Soo (Remember, Ruler: Master Of The Mask), who also acquitted himself well here with a very sympathetic performance, playing the brother-in-law of Kwon Yuri's character, who had a not-so-secret crush on her. 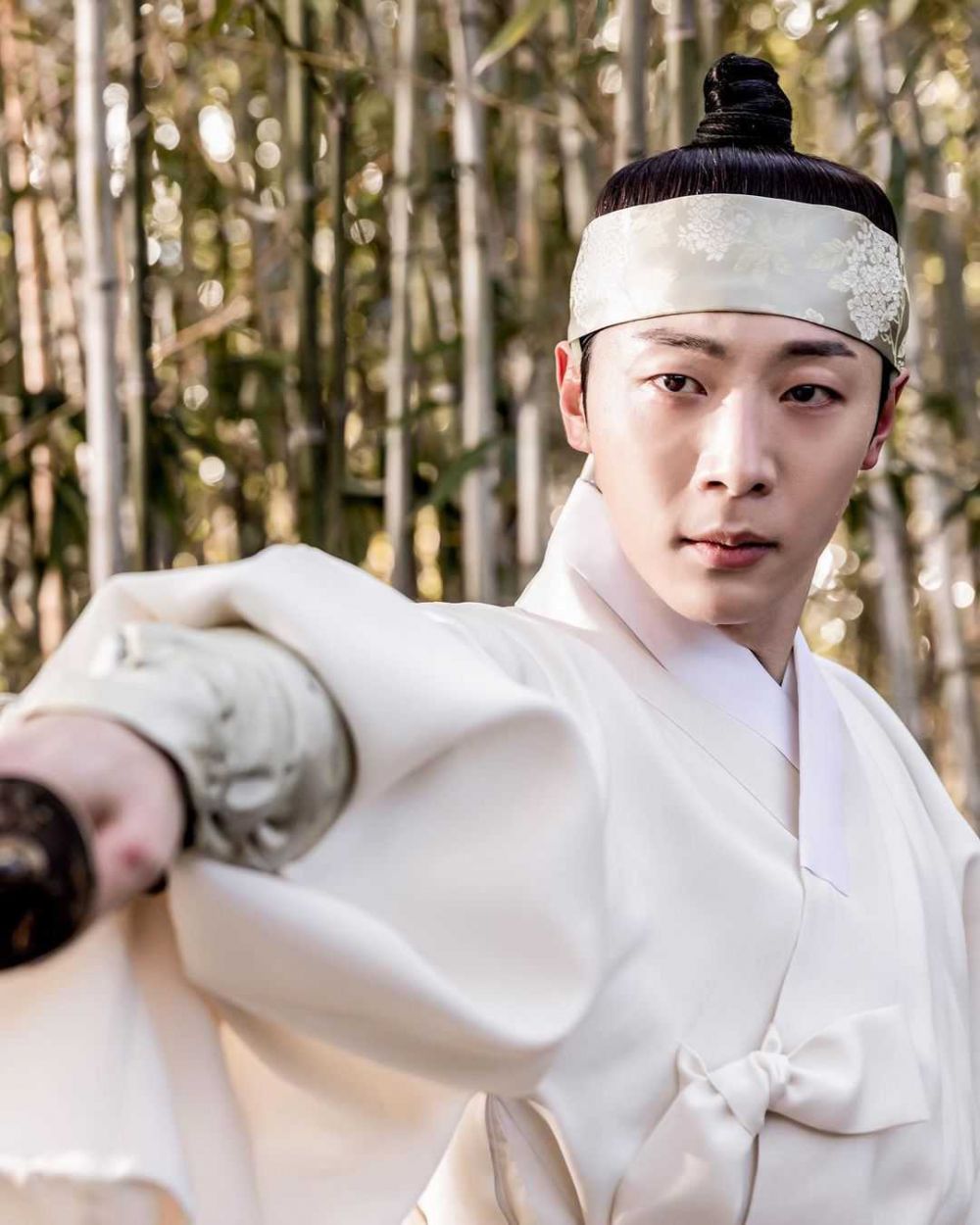 
Other actors of note were comedy foil Lee Joon Hyuk (Hyde, Jekyll and I, The Wind Blows) playing Jung Il Woo's cohort and right hand man; the always compelling Kim Tae Woo, who was unforgettable as the bad guy Mul Cho in That Winter, The Wind Blows, here playing King Gwanghae; and the indomitable veteran actor Lee Jae Yong (too many dramas to count on his resume, going way back to 1995's Asphalt Man) playing the ambitious Left State Minister to the King, who has a lot of secrets to hide.

Above: Kwon Yuri with adorable Ko Dong Ha
A Star Is Born! :)


Along with many familiar veteran actor players in the supporting cast, there was one giant surprise that totally delighted me: the new young boy actor, aged 9 at this filming, who played Jung Il Woo's son Cha Dol in the story, Ko Dong Ha. My goodness, me! MOVE OVER, SHIRLEY TEMPLE! This kid is a born actor through and through! During many of his scenes my jaw literally dropped down in amazement watching him perform. A complete Natural. A year after watching this drama you're not likely to remember every little plot detail of the story, but you are sure to remember this little kiddo! He was that magnificent. I'm sure he'll be going on to other choice roles long term in the world of entertainment in Korea. 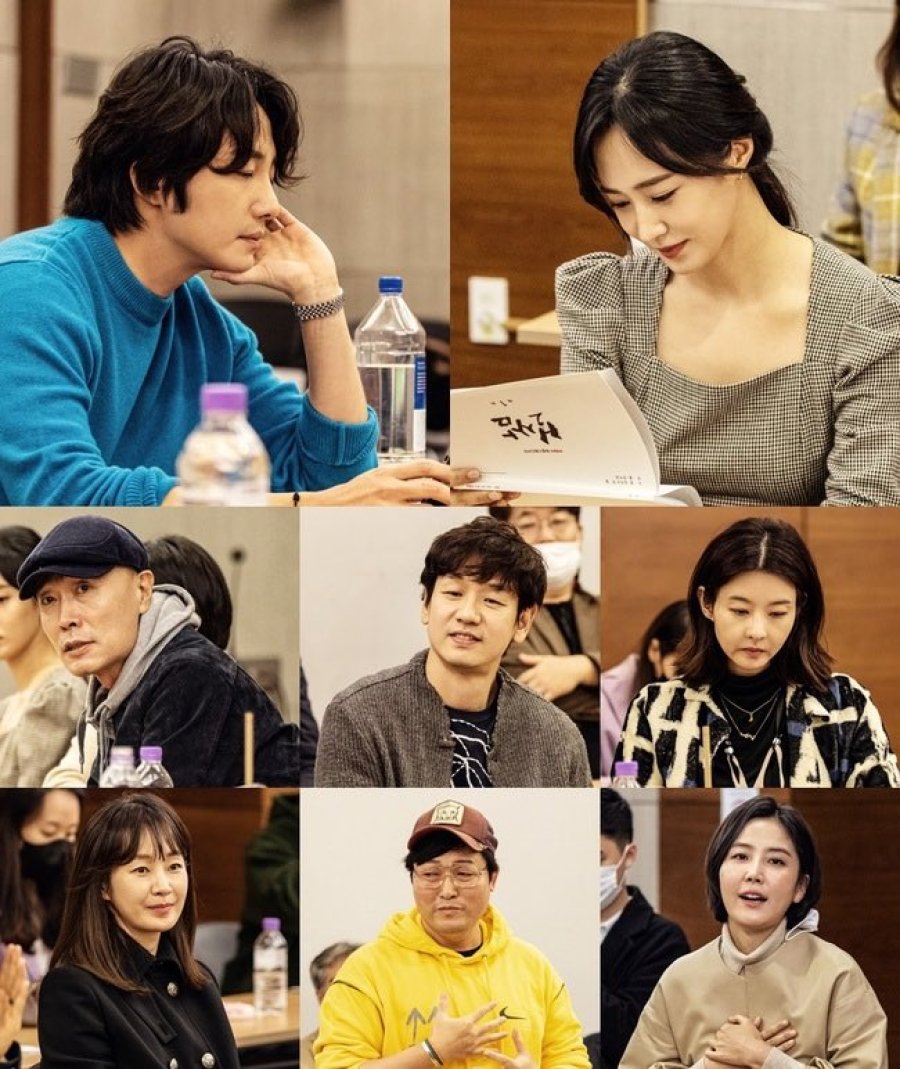 Itinerant vagabond Ba Woo (Jung Il Woo) had been the son of a disgraced nobleman, and after losing his family money, and being framed for a conspiracy by someone at a young age, he had to hide his real identity and use his wits to survive. He's never been blessed with any personal happiness: early in his life he had impregnated a woman who deserted him for another man, leaving him with a young son named Cha Dol (Ko Dong Ha) to raise alone. Thankfully, Cha Dol is a bright and personable and loving young lad, and gives his father something besides greed to live for.

Along with his scrappy, funny best friend and cohort Chun Bae (Lee Joon Hyuk), Ba Woo decides to earn their living engaging in bossam, an act of kidnapping widows for hefty sums, widows who at that time in the Joseon era could not openly remarry, and bringing them secretly to other men who desired them to become their wives. One night, while planning one of these bossam kidnappings, Chun Bae had gotten drunk and led Ba Woo to the wrong place: a palace courtyard, where, instead of kidnapping a servant as they had planned, they actually kidnapped King Gwanghae's widowed daughter, named Soo Kyung (Kwon Yuri), wrapping her in a blanket and carting her off into the night. 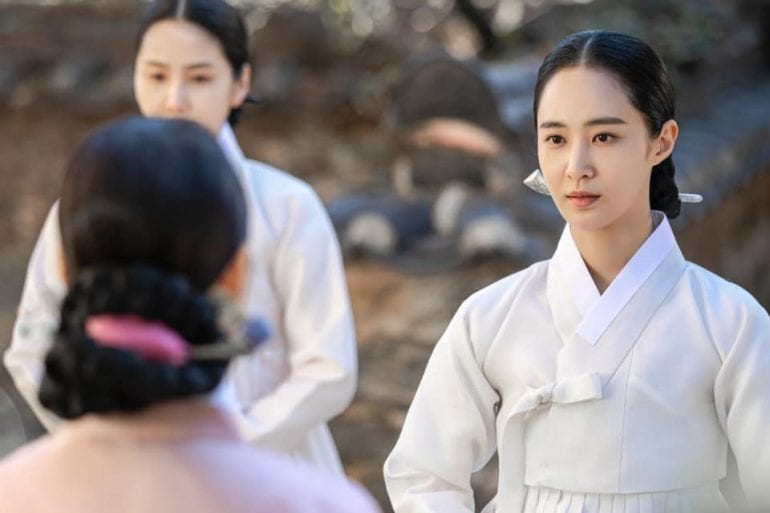 Soo Kyung, as was custom, had been living at her father-in-law's home, the Left State Minister to King Gwanghae, named Lee Yi Cheom (Lee Jae Yong), after her young husband, the Minister's son, had died suddenly before the marriage could be consummated. Noble and sincere, she had tried to be happy in their household, but there were those who resented her presence, and had made her feel unwelcome. The big exception was her brother-in-law, Lee Dae Yeob (Shin Hyun Soo), the youngest son of the household, who obviously is very much in love with her and wants to protect her.

When Soo Kyung disappears, the Left State Minister Yi Cheom and his family are frightened that they will be executed for not protecting the King's daughter properly. They make up a tall tale that she committed suicide, and that she had harmed herself so badly doing it that no one should even look at her in her coffin because her body would be too hideous to gaze upon. (This was a big stretch for me in the story!). King Gwanghae and his queen are devastated, and although the queen demands to see the body the King agrees it would be too upsetting to look at his daughter in such a horrible condition.


Meanwhile, a lady servant in the household named Court Lady Jo (Shin Dong Mi), who had actually raised and even breastfed Soo Kyung as a baby, knows the truth, that Soo Kyung is very much alive, and that the story of her suicide is false. She is threatened with death if she reveals the truth, but she ends up doing so anyway, informing Dae Yeob, who loves Soo Kyung, that the King's daughter is still very much alive and on the run for her life; Dae Yeob, sword in hand, runs off to try and find the woman he loves. When his father, the Left State Minister, discovers his son knows the truth he brings him back by force. Dae Yeob pretends he will stay at a Buddhist temple for reflection on the "error of his ways", but the audience already knows nothing will stop him for long in his search for Soo Kyung. He's far too smitten with her. 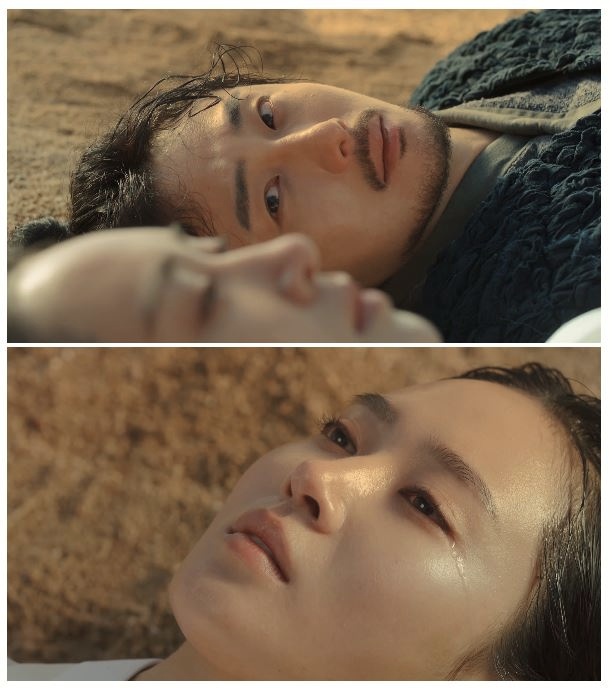 Ba Woo, after discovering his huge error in kidnapping the wrong woman, is on the run with his son and Soo Kyung, while his bossam cohort is captured by the Left State Minister and held in his stable by force. When the story reaches them that Soo Kyung is supposed to be dead, they quickly realize that if she returns to her father the King, and reveals she is still alive, there will be a civil war between the King's forces and the Left State Minister's forces. Many innocent people would be killed. Soo Kyung, at one point, even sacrificially tries to commit suicide for real, by jumping off a cliff, but she is saved by Ba Woo, who obviously is starting to soften to her because of her beauty, her spirit, and her warm character. His own son even started to call her Mom! What lonely man could resist all that, who had not had female companionship for many years? 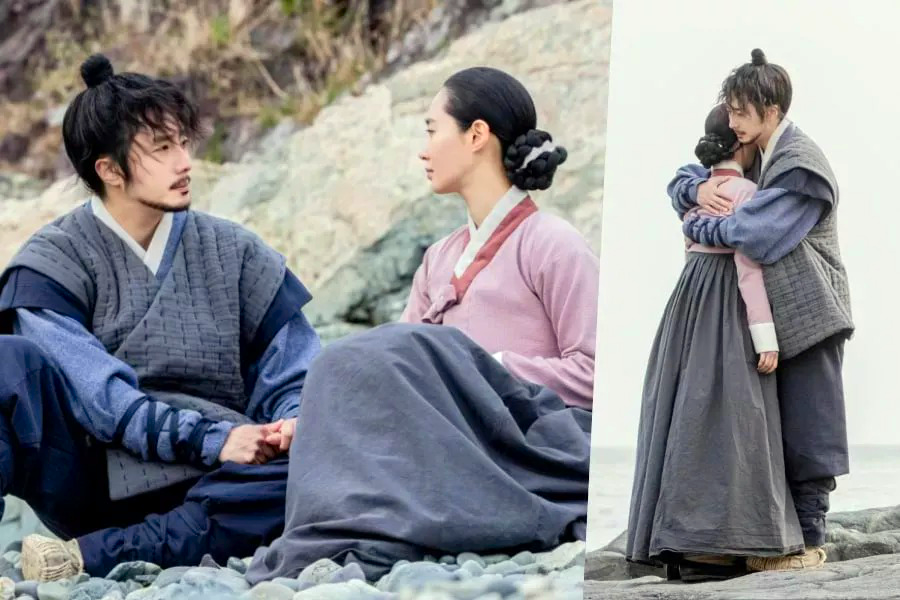 They end up staying at an abandoned farmer's cottage and fixing it up as a tentative home. Little by little Ba Woo, Soo Kyung, and Cha Dol become a real family to one another. However, predictable as death and taxes, their peaceful little world is about to come crashing down around them due to overwhelming outside forces that cannot be controlled, without a lot of sacrifice, toil, and suffering. We even get moments where Soo Kyung has to pretend to be a man to survive! (Painter Of The Wind, anyone?)

Will true love and peace prevail in the end, with all the bad guys getting their rightful comeuppance? 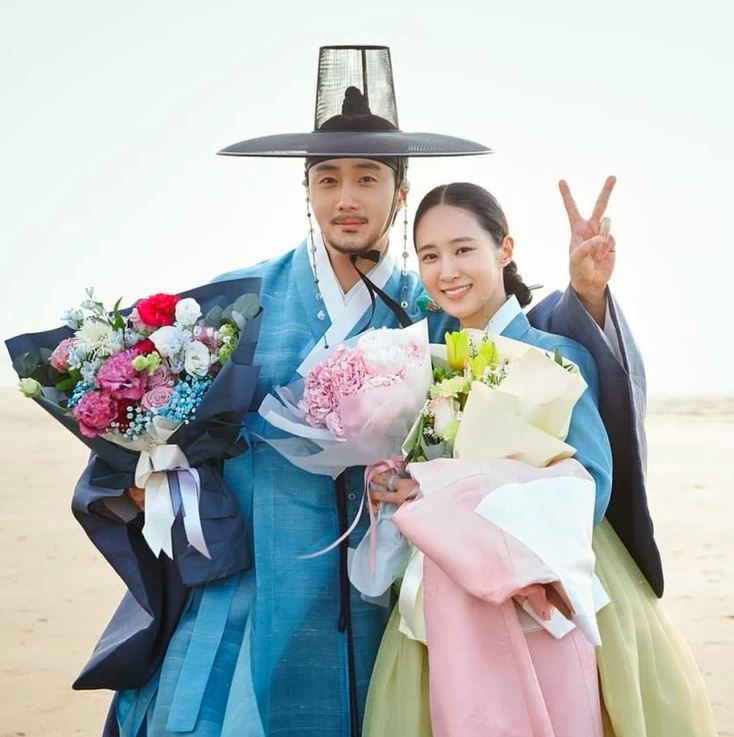 There were many beautiful, even breathtaking scenes in this drama; no mere general synopsis can adequately describe them. The acting was flawless by the whole cast, and there were only a few plot details that I thought needed some cleaning up (like during the bossam kidnapping, a servant cries out "Princess! Princess!" which SHOULD have alerted Ba Woo that he might be kidnapping the wrong woman, LOL! -- though they tried to clear up that lapse an episode later by having Ba Woo belatedly remembering it). The music OST was very nice, though I think a lot of other sageuk OSTs I've enjoyed over the past two decades have been more memorable. I also think this drama could easily have been shortened to 16 episodes instead of 20, and more adequately told the story with more fluidity and economy. Later in the series the politics of the situation became too much the focus, in my opinion, and less the romance between the principals. There wasn't even any kissing scenes between the two leads. How could you have so much chemistry popping off the screen between these two exquisite looking people, and not even have one smooch? It boggled my mind! Other than these small faults, the series is very much worth watching, especially if you love leading man Jung Il Woo like I do. He'll always be The Scheduler to me, but his performance as Ba Woo in Bossam: Steal The Fate definitely approached, and even sometimes surpassed, his performance in the masterpiece 49 Days. Check it out for yourself, and see if you agree! Enjoy! 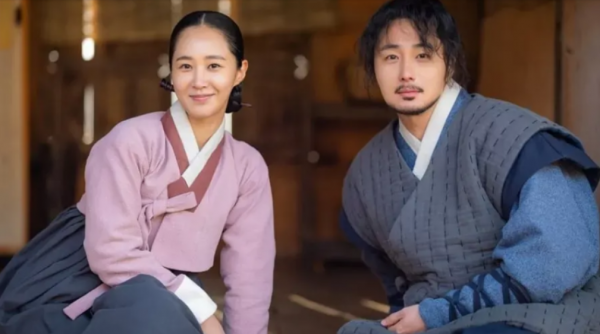