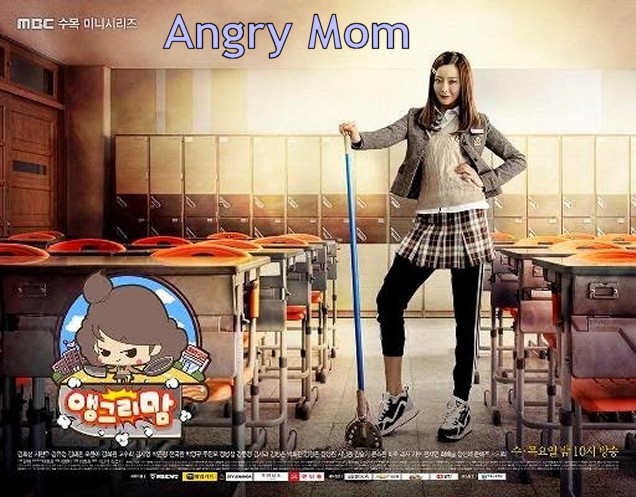 I had mixed feelings about this high school melodrama, Angry Mom (2015), which was written for a screenwriting contest by Kim Ban Di and won first prize. Although the topics covered were very serious and actually affect countless high school kids around the world today (mainly student bullying), the ways in which the scriptwriter addressed them were sometimes too cartoonish for my taste. When they played scenes for dramatic effect alone the show had a better foundation and actually seemed wise at times, but when they aimed at comedy the power of the drama was shaken off that foundation and seemed unrealistic, frivolous and downright silly. While the writer brought in some fresh material to her script at times, there were still enough typical K-drama cliches to make some of the story a bit tedious, particularly when it came to most of the villainous characters in this story, who were quite cookie cutter, similar to other one dimensional K-drama villains we've seen in the past. Very little originality there. I am really longing for the day when someone writes a K-drama script and deliberately does not use a single typical K-drama trope: wouldn't that be refreshing and amazing?

I think serious topics like school bullying, pedophilia, and corruption in government schools should be addressed seriously. There's nothing to laugh at about any of these things. The ratings seemed to match my own concerns, they were very average and for much of the show actually went down rather than up, something the Korean drama industry clearly does not want to see. Despite these misgivings, however, I still enjoyed the show. 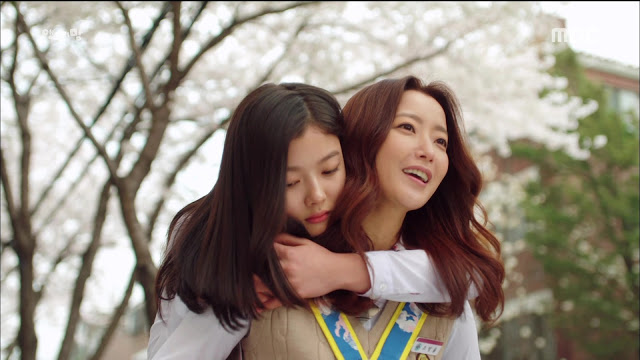 
What kept me watching and enjoying the drama were the fine performances which made the script better than it was on paper, especially the brilliant performance by the lead actress Kim Hee Sun (Faith, Sad Love Story), who was in her mid-thirties when she made this drama, but who could easily pass for someone twenty years younger. In fact, at times, she looked younger than the actress playing her teenage daughter, Kim Yoo Jung (The Moon Embracing The Sun).

Also, special mention should be focused on two other thespians who were interesting to watch, Ji Hyun Woo (Queen In Hyun's Man, Awl, Trot Lovers), who played a naive teacher so well that you just wanted to put your arms around him ... and SHAKE HIM, yelling like Cher, "Snap out of it!" He loved the students but he seemed blind to the serious issues they were facing.


Kim Hee Won (who played a detective in My Love From Another Star), as one of the main male villains you loved to hate in the drama, should have received multiple acting awards for his performance. It was bone chilling; for a good 90% of the drama he made his character so repugnant that you wanted to kill him yourself. I can't believe the industry didn't recognize this acting achievement. His character also goes down some surprising and dramatic paths (unlike the other villains) hinting at a possible reformation, and darn it, in the entire drama it was actually one of his scenes - near the end - that was the only time I cried in the entire drama! If you have watched it already you will know exactly what scene I am referring to ... if you have not seen it yet it's worth watching the entire drama just to see it! Kudos to him. 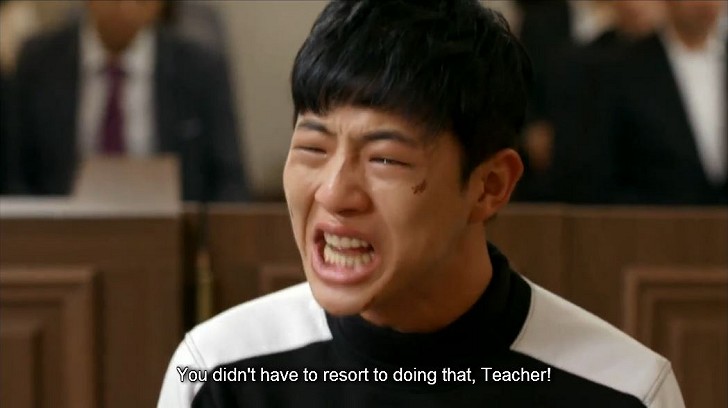 Another solid performance was given by relative newcomer to acting, Ji Soo (Page Turner), who began the drama looking like a bully but who by the middle to end of the drama showed the emotional complexity of a character whose growing up years were less than ideal and who wanted to change: deep down he wanted to be a good guy, but his "home" situation didn't show him how to grow in that direction. It also was very cute that his character developed a crush on Kim Hee Sun's character, even though she was much older -- he couldn't tell her real age, and even after discovering it he still maintained his boyish crush on her. (It also was funny that whenever he appeared in a scene all the teenyboppers went crazy in the comments' section on the Viki screen - you couldn't even read the comments they were all coming in so thick and fast). There was also another young idol the young viewers seemed to follow: Baro, who played a student with a crush on Kim Hee Sun's daughter's character. He was good too, but it was obvious out of the male student body cast Ji Soo had the most enviable role. 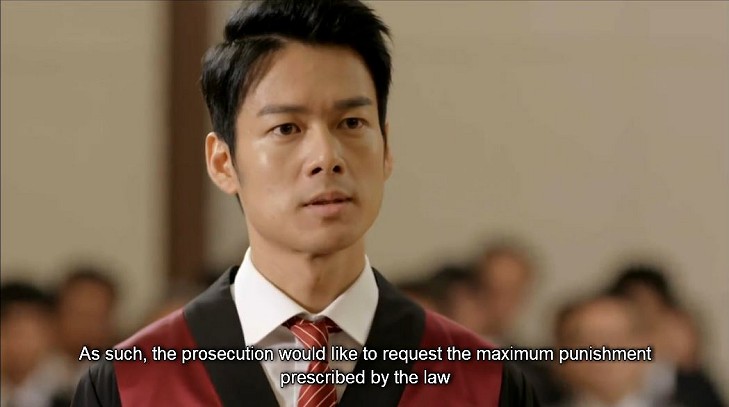 Then I was happy to see actor Kang Sung Min (who played the psychiatrist in 49 Days) give a rousing job as the main prosecutor who was going after the corrupt adults running the so-called "privileged" high school. Running it into the ground that is .... literally! Gosh is he smooth in this role, they really need to give this fellow lead roles instead of supporting all the time.


Jo Kang Ja (Kim Hee Sun) was once a hometown legend for being the toughest, wildest, most feared troublemaker at her Busan high school. No one bullied her ... unless they majorly wanted to regret it later. She would even target the teachers who were mean to her, for instance egging their cars! When she gets pregnant in her late teens, from an oddly quiet student she liked, who then sadly dies in a violent confrontation with his dastardly gangster brother An Dong Chil (Kim Hee Won), she drops out of school and tries to change her ways and live a respectable life, becoming a responsible mother to her daughter, Oh Ah Ran (Kim Yoo Jung).

However, always breathing down her neck is the angry, revengeful Dong Chil, who blames Kang Ja for his younger brother's death, even though he himself was really responsible. 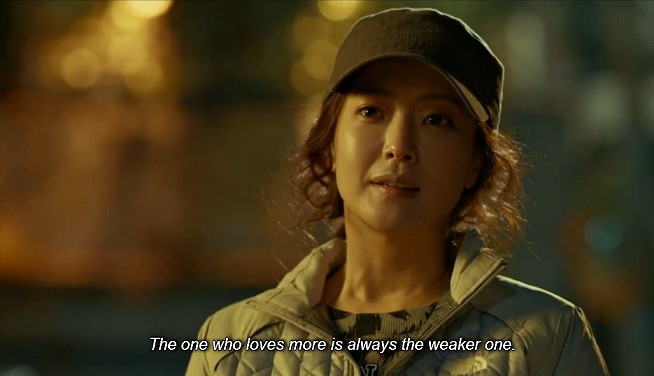 She marries a weak-kneed building inspector named Oh Jin Sang (Im Hyung Joon), and lives with him and his cantankerous old mother (Kim Ji Hyung), running a restaurant to help make income for her family. The husband and mother are lazy and expect her to do everything for them, even cook them meals at night after she's been cooking all day in her shop, and I couldn't quite understand why she put up with them. It wasn't enough that he was willing to marry her when she had a child by another man and under dubious circumstances as well; that was good, but we needed to admire this husband as a person as well -- but his neglectful demeanor toward his family made it exceptionally difficult to like or sympathize with him very much. If there was one major flaw in this drama it's that we really see no father-daughter relationship at all between Jin Sang and Ah Ran, even though when confronted by his wife he claims to love Ah Ran.

Ah Ran is a teenager who seems to avoid coming home any time soon after school (always a bad sign with kids). Kang Ja and Ah Ran have a contentious mother-daughter relationship, with Ah Ran ashamed of her quick-tempered, foul-mouthed, sashimi knife-wielding mother. Mom means well, but doesn't seem to understand that her daughter is embarrassed by her. Oh well, Kang Ja reasons to herself, the person who loves more in a relationship is the weaker one in reality.

When Ah Ran befriends the class outcast, subdued little Jin Yi Gyeong (Yoon Ye Joo), it makes her the target of the school bullies who then proceed to make her life hell, hitting her repeatedly, even calling her a lesbian publicly because she is so close to the suffering Yi Gyeong; yet she's too proud to tell her mother what's happening at school. 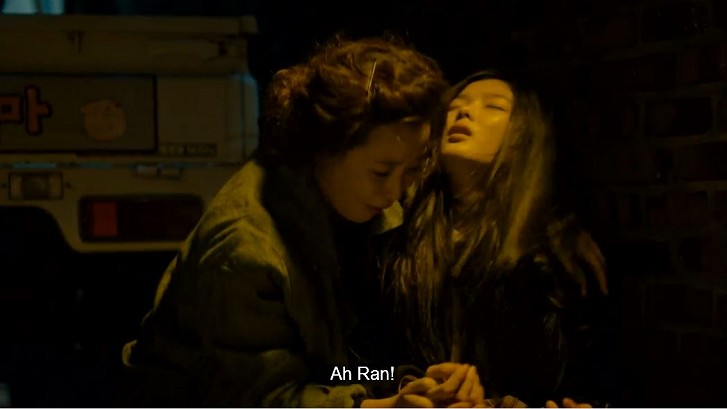 When Kang Ja finds out that her daughter is getting bullied, after her daughter is beaten so severely she goes into shock, she decides to take matters into her own hands, after going to police who demand more evidence before they will proceed with an investigation. (I was shouting at the screen, "What kind of police are you?!!"). 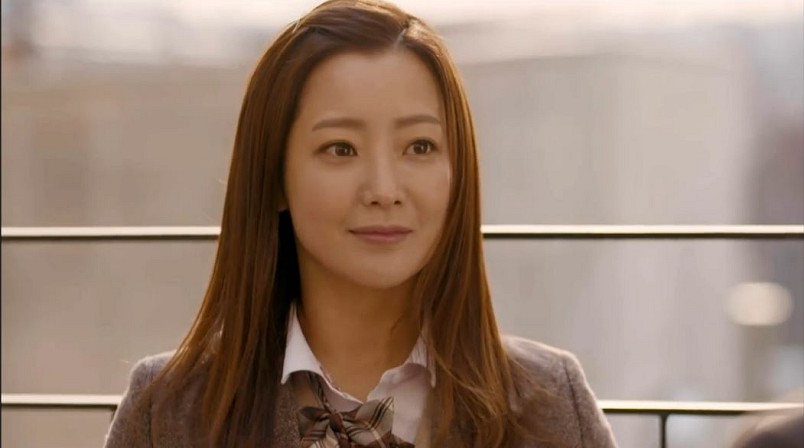 Unbeknownst to Ah Ran, she enrolls in her daughter's high school as an undercover student with the false name "Jo Bang Wool" (a name which makes the students laugh), to find out who is hurting her daughter and to teach those bullies a lesson. She soon starts to learn more secrets about this school than she bargained for, especially when the kids at the school see how strong she is and start to respect her and begin to confide in her. When she learns that there are bigger, darker problems within this educational system itself, in the form of a corrupt school board, stupid weak principal, a lecherous teacher named Do Jung Woo (Kim Tae Hoon from Operation Proposal and My Love Eun Dong) who gets student Yi Gyeong pregnant, then Kang Ja makes it her mission to put a stop to the school violence and corruption, with the help of sympathetic students Ko Bok Dong (Ji Soo), Hong Sang Tae (Baro), her recovering daughter Ah Ran, a naive and idealistic homeroom teacher Park No Ah (Ji Hyun Woo) the son of a sympathetic judge, and an old high school female friend Han Gong Joo (Ko Su Hee) and her two comical underlings who run a nightclub. These latter characters were fun to watch but sometimes I felt their comedy got in the way of a very serious story line. Maybe a serious story about children getting hurt and killed didn't really require a comedy relief team. 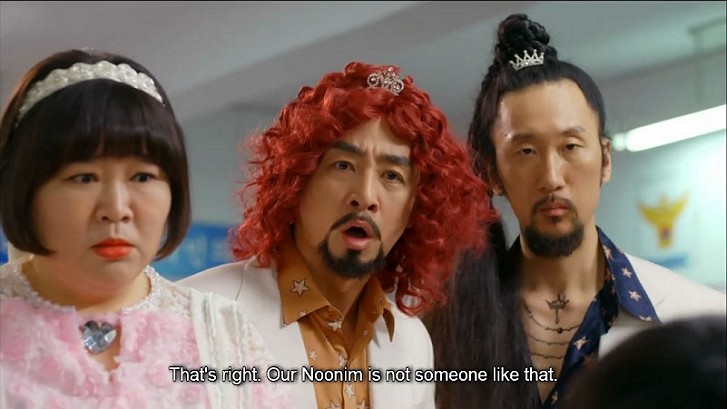 Yi Gyeong appears to commit suicide and then her pregnancy is discovered by autopsy. Some suspect that paedophile teacher Jung Woo murdered her but there's no proof, at least right away.

The stronger mother - daughter Kang Ja and Ah Ran's relationship becomes, the stronger they become as a team in fleshing out all the bad guys who are destroying the school and students for greed, including real estate developer, crime boss Hong Sang Bok (Park Young Gu), and even a man seeking the presidency, Kang Soo Chan (Park Geun Hyung from Sandglass and The Suspicious Housekeeper). They seem to get away with all their shenanigans ... until the school building actually starts to collapse from the use of cheap building materials, killing several students, as well as others. (Many audience members seemed to think this was touching upon the Sewol ferry disaster of April 2014, since shady higher-ups and their bad business decisions were largely responsible for that tragedy as well). 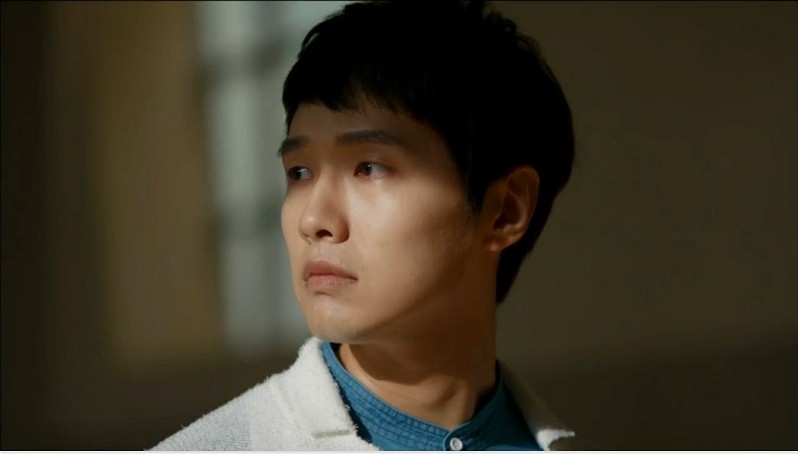 Ji Hyun Woo in a lovely screen capture from the show
Such an under-rated actor.

Will Mom and Daughter and their supporters win the day in the end and make the school safer for students, uncover the truth behind Yi Gyeong's death, and put the criminals behind bars? Will we have a happy ending, or a sad one? Who will end up with whom romantically?

This is a complex, sometimes frustrating, but ultimately worthwhile Korean drama to watch, mainly because of all the dynamic and varied acting performances from the entire cast. I should also mention the OST is quite different than the norm, with jazzy numbers often underscoring the action. Very creative and enjoyable. I'm going to have to try and track this one down!