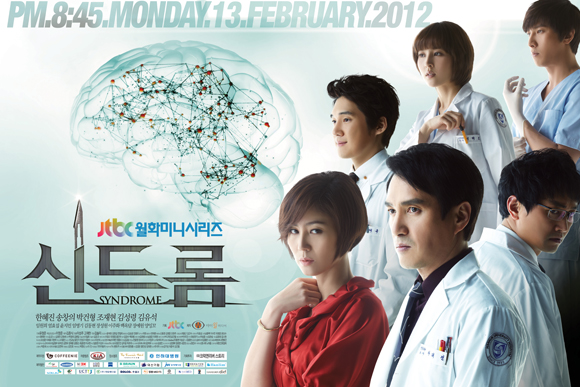 I had never even heard of this 2012 K-drama called Syndrome until they added it to Instant Netflix in 2015, so I decided to take a plunge and watch it. I'm glad I did because it was probably the most addictive medical drama in the K-drama world that I have ever seen: not just an emphasis on medicine, but on lots of corporate intrigue within the hospital that the characters all work at, and interesting, obsessive love triangles to keep the romantics out there interested in the plot. As usual, you have the good characters, the bad characters, and the ones who are undecided as to which side of the fence they should stand alongside. All the actors were excellent and the writing was cohesive and exciting too. If you're looking for a perfect Dr. Kildare or Dr. Welby story you won't find it here!

The medical emphasis in this one is mainly in the field of neurology, a difficult branch of medicine where just one wrong move by a doctor surgeon can inflict permanent nerve and/or brain damage on the patient. You have to possess your own nerves of steel to be a successful neurologist, and especially you have to be strong if you happen to hire an evil egotistical one, like the main male character in this drama, played chillingly well by Jo Jae Hyun (Snowman, Piano), who sneakily and deliberately harms his wife, also a doctor, during her difficult and risky brain surgery, simply so he can get her out of the way so that he can become the CEO in the hospital, which her family company happens to own and run.

All this while having an exotic lover on the side who likes to take bubble baths with him and help him plan his wife's destruction. Whoa, Ahjussi Jo, I'm used to watching you play good guys: watching you play an all-out sociopath was very disturbing to me. I kept saying to my kids while watching Syndrome, "I'm going to have to re-watch Snowman after this is over; when he played a good cop he was much more sympathetic!" A sociopath is incapable of true love, they can only mimic what they see others do. This doctor is malevolent inside, but a fake nurturer on the outside, so he is adept at fooling a lot of people. 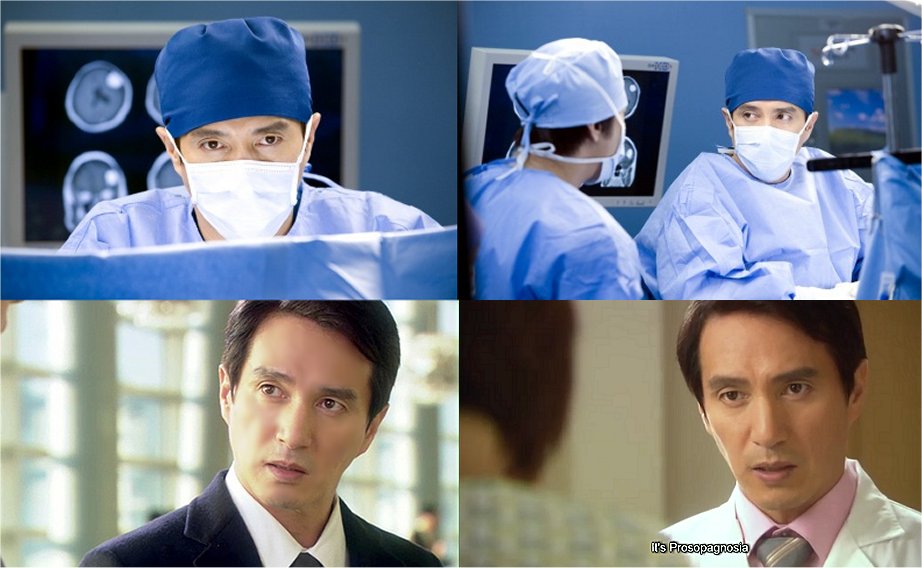 The Story: Dr. Oh Eun Hee (attractive Kim Sung Ryung from Heirs, Padam Padam, You're Beautiful, the film The Fatal Encounter) is CEO of her family's hospital, but married unhappily to top neurosurgeon Dr. Cha Tae Jin (Jo Jae Hyun). In fact in twenty-eight years of marriage they have never slept together, although publicly they put on a show of civility at the hospital. It is assumed the marriage was a step up the social ladder for him, and for her to achieve a sense of stability with a top surgeon on staff.

Then tragedy strikes and Eun Hee is diagnosed with a rare, extremely risky brain tumor, in fact the odds of her surviving the surgery are extremely low. At a board meeting her medical condition is discussed publicly with everyone and Eun Hee asks her "husband" pointedly in front of everyone to perform the operation -- while she is awake! She had read that the chances of survival are higher with this type of surgery if general anesthesia is not used. Tae Jin agrees to perform the surgery on his wife under a mild local anesthetic only.

Unbeknownst to Eun Hee, her wonderful "husband" has an exotic mistress Kim Yi Joon (Yun Ji Min) on the side, and while they spend private time together having "fun", they arrange the details of how to permanently disable Eun Hee so that she would have to retire from her CEO position, and afterward name her husband as CEO instead. They're jumping the gun a little bit, as it turns out, but such is their arrogance.

Dr. Tae Jin knows how to damage just the right nerve during surgery that controls the human brain's ability to recognize human faces. This will cause a syndrome called prosopagnosia (yes, even the Windows Spellchecker thinks it's not a word! LOL!).

When the surgery is finished it seems to be a success, the CT scans are clear of cancer, but then Eun Hee's adult son (from another man before she was married to Tae Jin), first year resident intern Cha Yeo Wook (Song Chang Hui from Dr. Frost) walks into her hospital room ... and she doesn't know who he is! Only by reading his ID pin on his medical coat pocket can she identify him. Then in another shock in walks her "husband" and she asks, "Who are you?" She has to look down at HIS ID pin to identify him, too. She starts screaming and crying hysterically -- and the sick, twisted Tae Jin smiles secretly to himself. He has accomplished what he had set out to do, disable his wife. Or so he thinks ....

However, it remains to be seen whether Eun Hee will decide to "retire" from her CEO position because of the syndrome she is stuck with now. She seems to be quite the fighter (good girl!) and she almost immediately suspects her "husband" deliberately did this to her, though he pretends to be sad and apologetic, saying it was an "accident". She has encounters with the mistress in the hospital hallways and suspects her of evil intents. 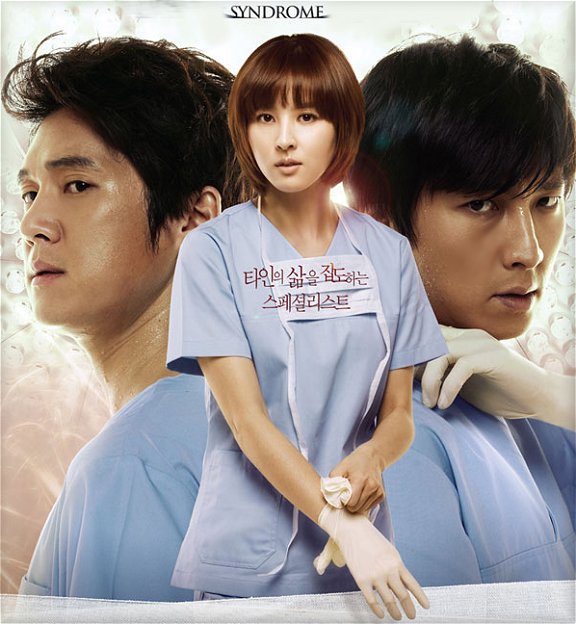 Meanwhile, Eun Hee's son Yeo Wook becomes involved with a new female intern named Lee Hae Jo (Han Hye Jin) and, as typical for Korean dramas, they don't get along all too well in the beginning but since she has a photographic memory which helps her in her work he begrudgingly begins to admire her, because even though he went to a more prestigious medical school, Hae Jo is more determined to succeed in neurology, whereas Yeo Wook only chose medicine as a field to impress the man he thinks is his real father, Tae Jin. 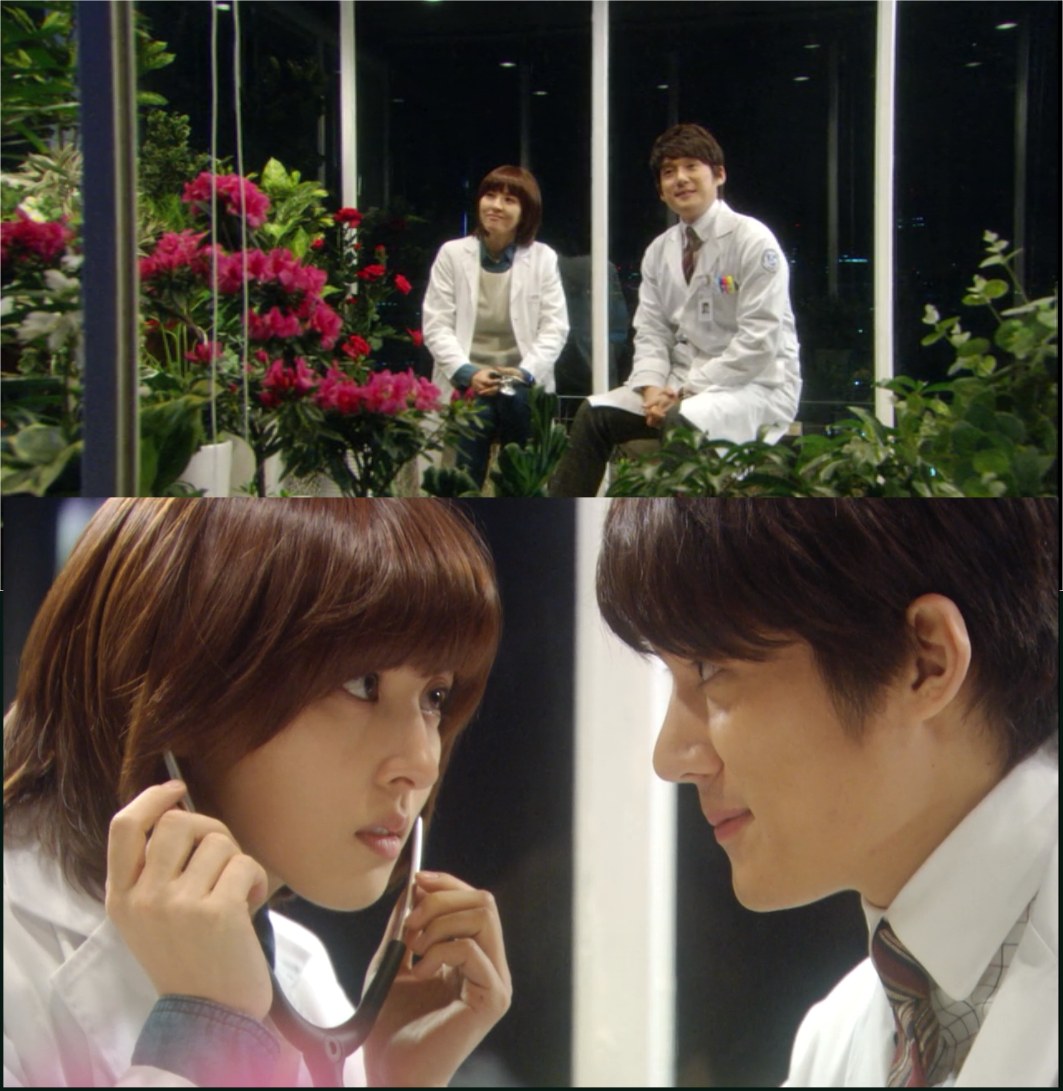 A rivalry begins between Yeo Wook and a doctor administrator named Kang Eun Hyun (actor Park Gun Hyung, who starred opposite Geun Young Moon in the 2005 dance film Innocent Steps). He is super nice to Hae Jo, and starts to carry a secret torch for her above and beyond the call of duty, whereas Yeo Wook keeps giving her a hard time. 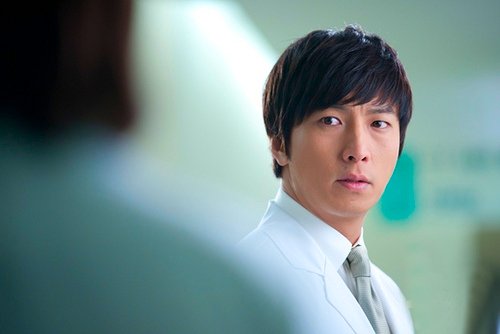 Part of that longing in Eun Hyun could be attributed to the fact he's been alone a long time, since his wife is in a mental institution after trying to commit suicide several times. He's too good a man to divorce her (Edward Rochester, anyone?), so he has been living for his medical career and seeing his wife once a week out of duty. Intern Hae Jo starts to suspect both men are in love with her, but who does she really have the strongest feelings for? She likes them both! (I had big Second Male Leaditis Syndrome myself in this drama, the way actor Park Gun Hyung stared at her could melt anybody!).


Love Triangles Are Pretty
Set To Music, Aren't They?


Eventually Dr. Eun Hee decides very practically that she cannot continue her career because of her disability. The evil husband Tae Jin thinks he's won now and will get the coveted CEO position in the hospital. However, the man who is the father of Eun Hee's son, Dr. Min Sung Joon (Kim Yu-Seok), re-enters her life, professionally first and then personally later; he is a famous neurosurgeon, an author, and even more famous than her wicked husband, and so she speaks before the board and nominates him to the CEO position instead of her husband. The board members have heard that he saved a woman with only a 1% chance of survival during a brain hemorrhage and that achievement helps them decide in his favor. Tae Jin is furious and vows revenge.

Sparks are flying now between TWO groups of triangle love - power struggle relationships! How will it ever end? Will Tae Jin finally get what's coming to him? I must admit I was living for that moment since episode one! I also couldn't wait to find out if intern Yeo Wook would ever learn the identity of his biological father, and the reality of the dead marriage of the two people he considered his family for years. 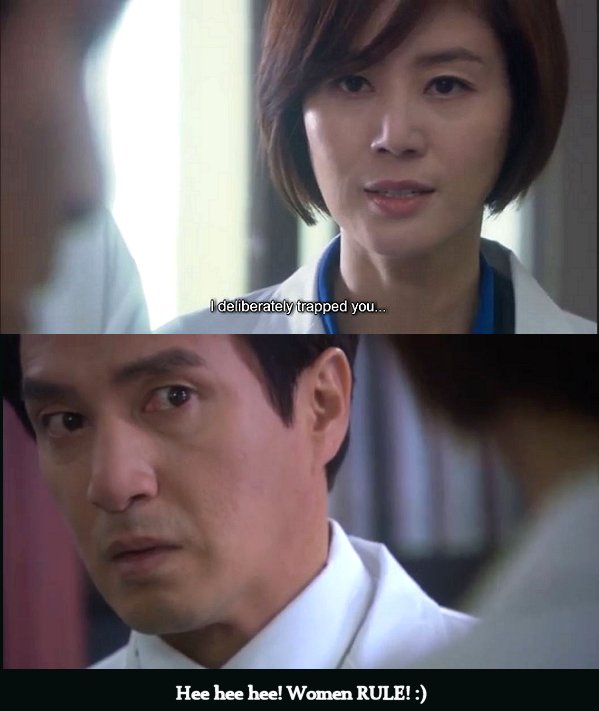