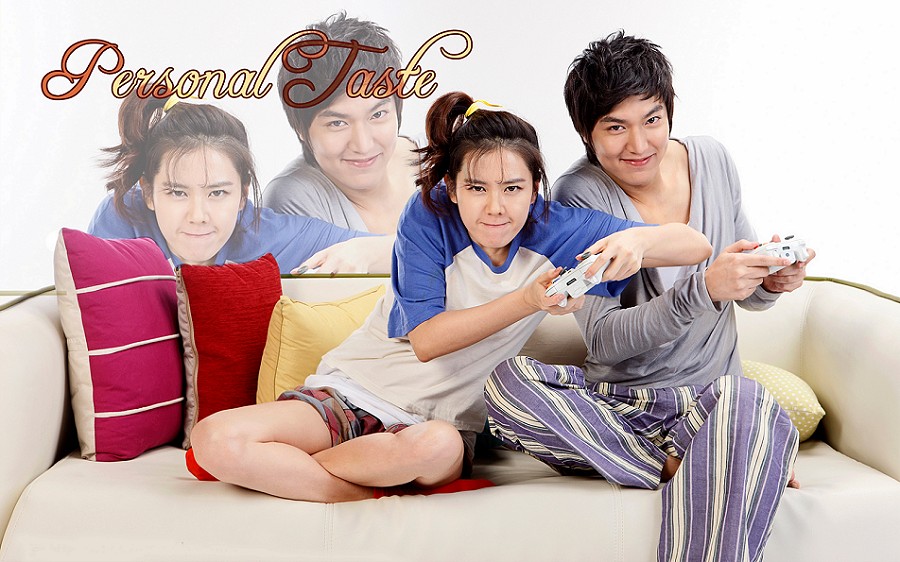 Personal Taste (2010) is a romantic comedy about an architect, Jin Ho Jeon (Lee Min Ho), who pretends to be gay so he can live with a girl named Gae In Park (Ye Jin Son) in her famous traditional hanok style house called Sanggojae (meaning "A Place For Mutual Love"), on which he hopes to design his new architecture project. He secretly seeks to study the house and find the original blueprints so he could win a contest and be picked to design a new building by a prestigious firm, headed by Director Do Bin Choi (Ryu Seung Ryong).

The house was created by Gae In's father, the infamous Teacher Park Cheol Han (Shin Il Kang), a very well sought after and admired architect who is temporarily away in England while his adult daughter Gae In, a furniture designer, is supposed to watch over the home. However, she gets in debt by borrowing money for her business which is squandered away by a colleague, so she is forced to take in a boarder to make ends meet.

Jin Ho lies his way through to get into the house as Gae In's roommate, until he falls in love with Gae In and finally decides to tell her the truth about his real sexuality, and by then the lie has gone quite far. Gae In has all along treated Jin Ho as practically a girlfriend. When the truth is revealed they start a tentative love, while she also deals with trauma from her own dark past.

The Famous Game Over Kiss


They both have to deal with secondary characters who wish to break them apart because they have romantic designs on them: Chang Ryul Han, Jin Ho's chief professional and personal competitor for the architecture bids (played sleazily well by actor Ji Suk Kim), and In Hee Kim (Ji Hye Wang) who used to be Gae In's best friend until she betrayed her. 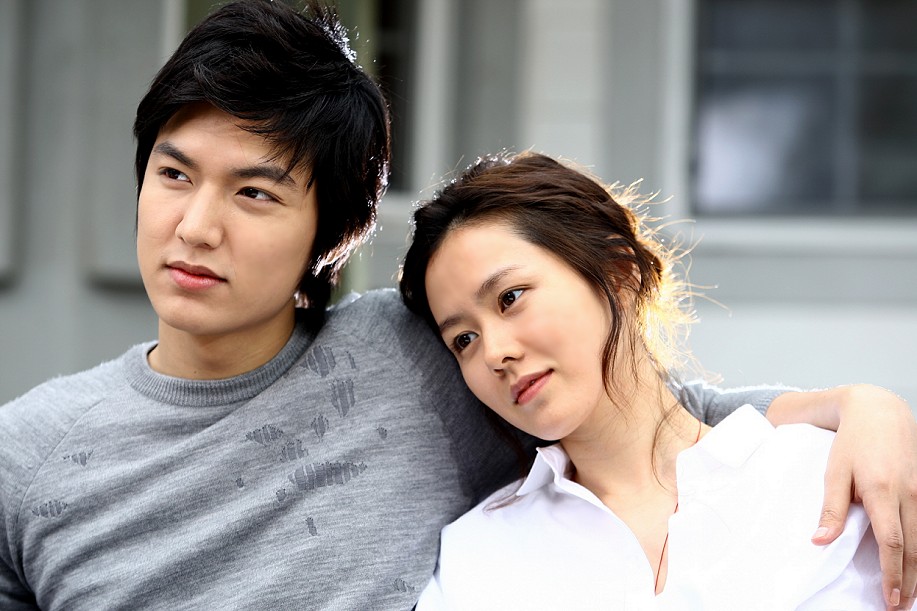 At first, I didn't have the strong connection with this show that I did with Master's Sun, which was my first K-drama. Master's Sun is so much different from Personal Taste. But this show grew on me as it progressed! The chemistry that these two characters of Gae In and Jin Ho had on the screen was phenomenal. Although this dealt with a rather controversial subject, I felt they did it very tastefully, and I liked the character of Director Choi, who develops his own affection for the young promising architect.

The scene at the party was hilarious! Gae In gets her ... monthly curse ... and Jin Ho runs to the store for her. When he gets there, he searches for the feminine products and realizes three girls are watching him. Embarrassed to grab what he really went there for, he reaches for some manly products as the girls coo about how cute he is. When he finally sucks it up, buys Gae In's things ("those things with wings") and leaves, they continue on and say how lucky the girl is to have him! Haha! This scene is up there with the eventual proposal scene in greatness.


I love the way the story goes deeper with the back story of her deceased mother. I found myself choking up big time hearing that sweet little girl voice. 'Omah!... Omah!...' poor little baby just wanted attention from her mommy. They really know how to tug at your heart strings in these shows, and often it involves children, which adds to the heartbreak. I remember well being a child, and know exactly how they might feel. 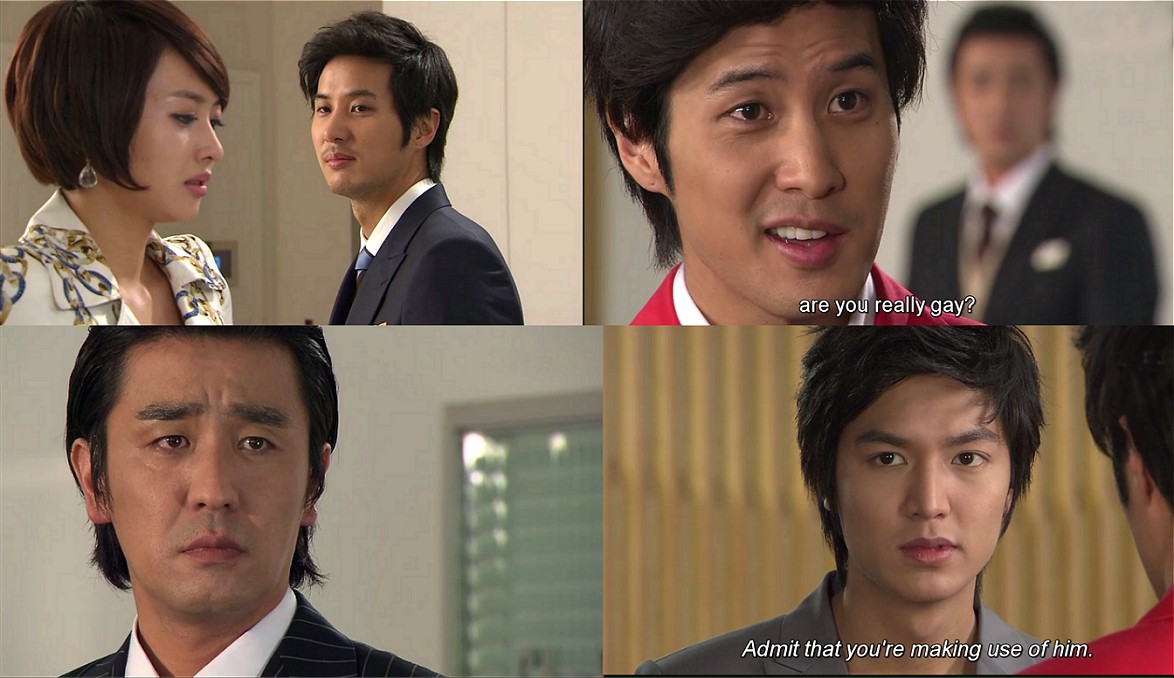 The petulant, jealous character of Chang Ryul (Ji Suk Kim) causes no end of trouble for the other characters,
In Hee (Ji Hye Wang), Director Choi (Ryu Seung Ryong), and Jin Ho (Lee Min Ho), who is caught in his own lie


I found the voice of Chang Ryul very sing-song like, especially in the hallway in front of Director Choi and Gae In where he confronts Jin Ho about being gay. Although I didn't want to like him because he was a horrible person, I really melted when he started speaking English! 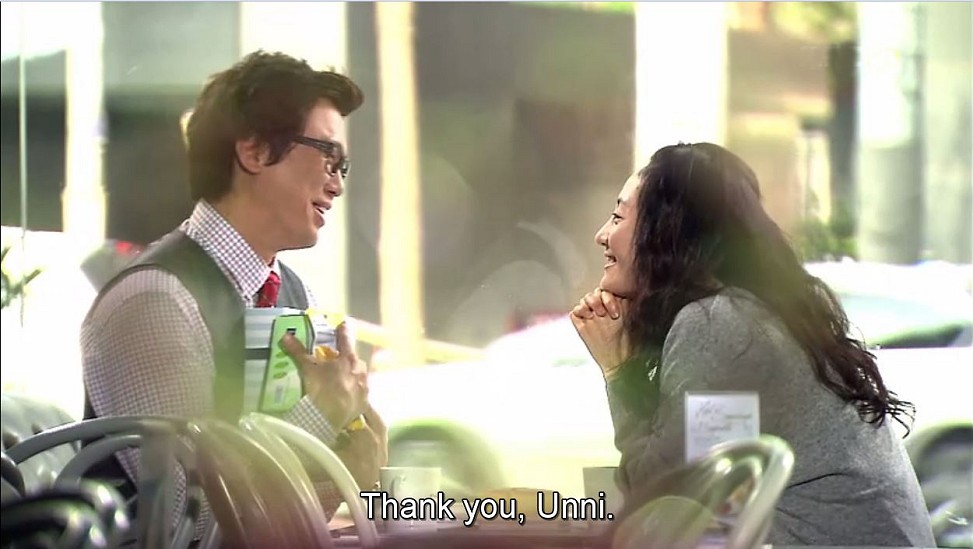 One of the many things that sets K-dramas apart from American TV is the supporting cast. You always find yourself wishing for a spinoff! This one was no exception. I loved Gae In's close friend Young Sun (Eun Ji Jo) and Jin Ho's friend Sang Joon (Sung-hwa Jung) and wished that they could get together. They were hilarious! Many situations in the show are just so funny!

It took a while for me to like Jin Ho's character. I thought he really didn't deserve Gae In in the end, although I liked the end result, and the way he proposes to her is the best I've seen ever! I found myself actually laughing out loud and clapping at quite a few scenes throughout Personal Taste.

I would recommend Personal Taste to anyone who loves fun shows with an element of drama!