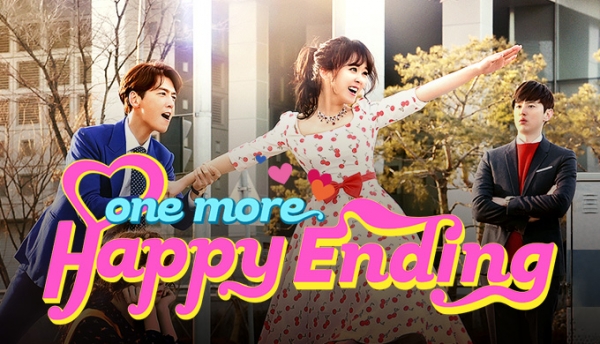 If you want a Korean drama to watch that is light and breezy and funny and romantic (not to mention topical to a lot of people's lives today) then consider watching One More Happy Ending (2016) starring Jang Nara (My Love Patzzi) and Jung Kyung Ho (who played Yune in I'm Sorry, I Love You). It's not Shakespeare but it's a nice show to watch after watching a string of heavy duty melodramas in a row, like I had done before I chose to watch this frothy drama just to get a break from the heavy emotional commitment of shows with a more serious bend to them. This was my 275th K-drama completed at the time, and I'm glad I watched it, although there was nothing unpredictable about the story at all. Most long term K-drama fans could probably figure out everything that was going to happen in the series by the end of episode one! However, when you're tired from watching melodrama after melodrama after melodrama, there's a special beauty in enjoying a frothy bubble. Like going to a water spa and relaxing after running several marathons in a row.


Two smaller details added to my enjoyment of this show: the first episode featured a wonderfully amusing lengthy cameo appearance by sexy actress Kim So Yeon (who had also starred with leading man Jung Kyung Ho prior to this drama in Falling In Love With Innocence in 2015). Here she played against her usual type, a young mother of two girls whose husband left her for another woman, claiming she was fat and unattractive (KIM SO YEON FAT AND UNATTRACTIVE??? ARE YOU KIDDING MOI???). So the actress is brave enough to dress herself down for the role, make herself look frumpy and unable to keep her husband from divorcing her. She goes to the dating agency that is at the center of this story and is told flat out that it will be practically impossible for her to find another man. Come on! Kim So Yeon is gorgeous!!! She is one of my top favorite Korean actresses and I will watch her in anything. Here, in this scene below, she is in divorce court and the judge tells her he is awarding her far less alimony than she expected. Oooh, she did not like that one bit. (She obviously needed a barracuda lawyer and didn't have one). Notice what a piece of work the soon to be ex-husband is. He needed to be slapped. But good!

The second delightful cameo in this drama, which is about a dating agency that only specializes in "second time around" couples, comes from the cameo by Late Night host - comedian Conan O'Brien, who is known to love all things Korean (especially their spas!). Here he plays himself, looking for a new love in Korea, and he takes one look at counselor Jang Nara and thinks he has found his dream girl. (Unfortunately she doesn't seem to agree with him. LOL).


Four best girl friends, Han Mi Mo (Jang Nara), Baek Da Jung (Yoo Da In), Go Dong Mi (Yoo In Na from Secret Garden) and Hong Ae Ran (Seo In Young) were once members of an idol singing group called Angels but now they are entering their thirties and their lives have changed considerably since they were in their early twenties. One gal is a divorcee and dating counselor (Mi Mo), one is a single, sharp tongued career lady working for an internet shopping mall (Ae Ran), one is a be-speckled, frizzy haired, lonely schoolteacher trying desperately to marry .. just about anyone (Dong Mi), and another lady, also a dating counselor (Da Jung), is on the verge of her own divorce that she's not sure she really wants. The ladies keep in daily contact and look out for one another as much as time will allow in their busy schedules. Will these long term friends all succeed in finding love and happiness against all odds? 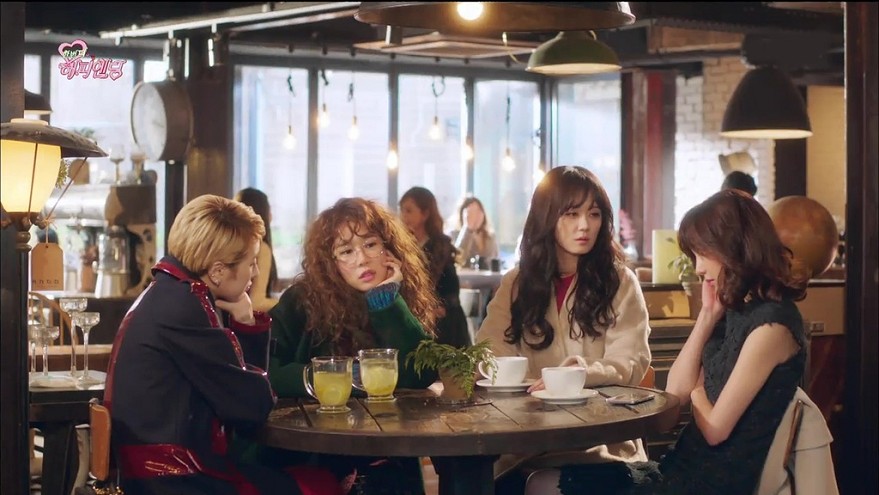 Mi Mo is a successful co-owner, with best friend Da Jung, of a matchmaking company called Brave Wedding, which specializes in joining couples who have been divorced and are looking for new loves. Song Soo Hyuk (Jung Kyung Ho) is a single father who works for a gossip magazine called Masspunch and he and Mi Mo meet by chance when he's tailing a celebrity (some very funny scenes there, with Jung Kyung Ho dressed as a silly woman, in order to tail the celebrity more incognito). Turns out Mi Mo and Soo Hyuk had been childhood friends who had been separated (see what I meant earlier about nothing unpredictable?). As these childhood friends, now adults (barely), collide on professional and personal levels (they even discover they live in apartments right across the hall from one another!), will they find a true match ... with each other?

Reporter Soo Hyuk's best friend is Goo Hae Joon (Kwon Yool), who is a doctor and single. Will one of the ladies do for him as a mate?

Attractive Da Jung had married a rich man named Gun Hak (Kim Tae Hoon from My Love Eun Dong and Operation Proposal), but her marriage is on the rocks. Sometimes it seems like she is looking forward to the divorce and at other times she isn't sure about it at all (and her feelings are matched by her husband's). 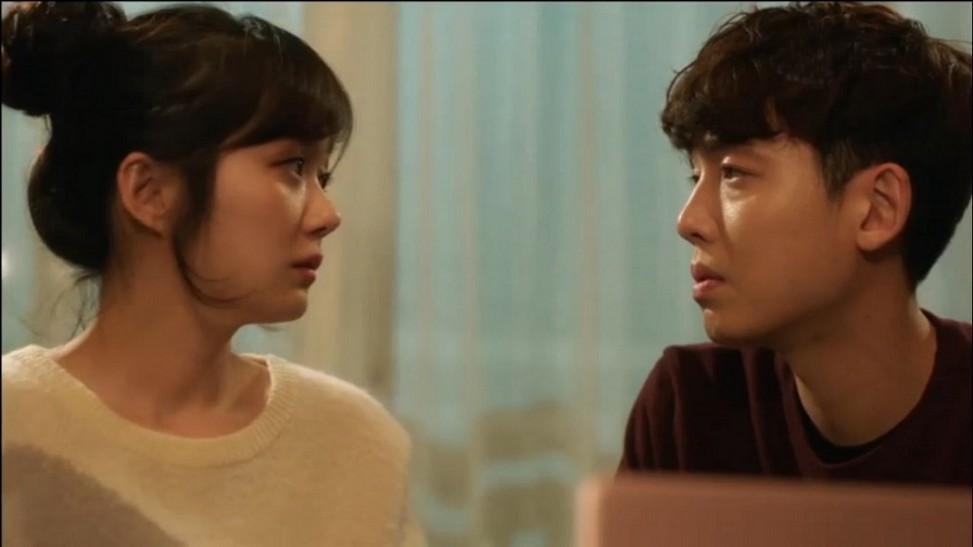 We have a lot of flashbacks in this story so we can see where all these characters were emotionally and professionally earlier in their lives, and the events that shaped their various personalities and professional interests. At one point Soo Hyuk thinks Mi Mo might be considering suicide via drowning and he "rescues" her, but such wasn't her intent at all. It's almost from the beginning that we can sense he likes her and is concerned enough about her to worry about her welfare. But she puts him off. Again and again. Personally I didn't get that AT ALL. If a guy is crazy enough about you in order to risk his own life to save you, I think the woman better take notice and not take that for granted! Their growing "romance", if that's what you can call it, is sometimes moving, sometimes frustrating. You want to shake both of them at times.

Comedy in the show further comes from the various people who come to the dating agency looking for their second time around relationships. The audience can easily see these people a lot more clearly than they can see themselves. 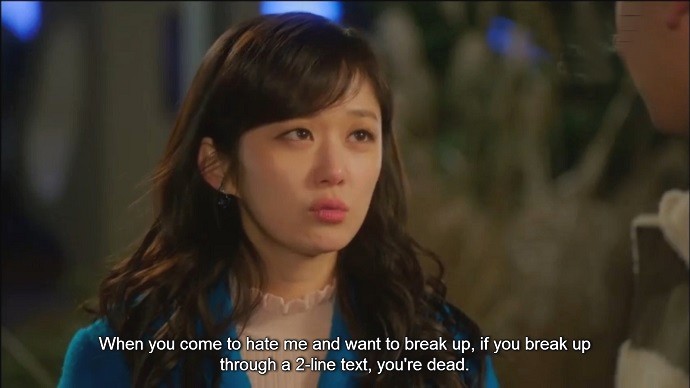 The show ends with a wedding, but between a couple you may not suspect will be together at the beginning. Then it becomes obvious who will be next to the altar.

My one reservation about this show: The one thing I didn't like about the ending of this drama was that actor Jung Kyung Ho's character Soo Hyuk uses the F word ... it's bleeped out of course but it's clearly obvious what he said. I thought that moment was unnecessary and it rather ticked me off. Give us a traditional sweet and respectable ending to a rom com, not a dirty word. Don't know whose bad idea that was, but 20 hits with a wet ramen noodle for whoever slipped it into this show. First and only time in a K-drama I have seen that word deliberately used ... even though it's bleeped out (however, most streaming sites typed the word into the subtitle, figures). Most of all it just didn't seem to be in character for this guy to say it, and during a wedding, no less. Too bad they ended a bright and breezy drama on such a sour note. Totally unnecessary. Could you imagine Jane Austen inserting that word into one of her many novels that end with weddings? Not classy. Hope they don't do that again in K-dramas. 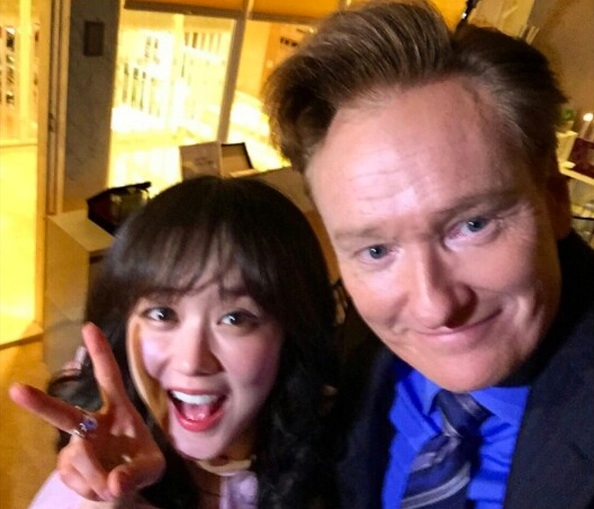