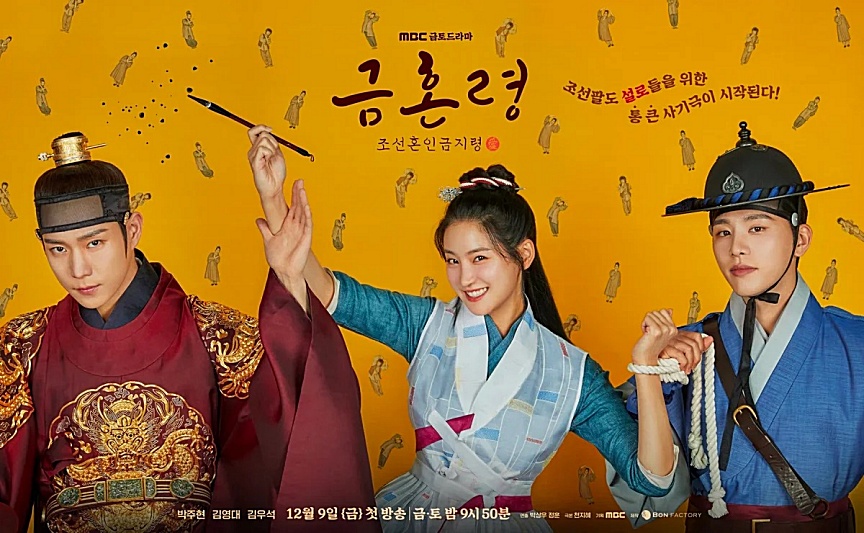 What a disappointment this drama, The Forbidden Marriage (2022-23), was for me! Especially since the first episode was so hilarious and made me laugh out loud many times, I was expecting more comedic brilliance as the story unfolded, but it was not to be: the drama descended into depressing historical drama cliches and tropes, plot points that didn't make sense or were downright ludicrous, and the drama even fell into depicting sexual immorality, such as in a certain scene that should have kept this drama from being watched by minors younger than eighteen years old. I had fallen in love with Korean dramas two decades previously when the lead female characters were strong and inspirational, virtuous and admirable in character, not depraved. I could not imagine the lead female characters played by Choi Ji Woo, Ye Jin Son, Song Hye Kyo, or Han Hyo Joo in the classic Four Seasons' Korean dramas, that began the Hallyu Wave worldwide, engaging in pre-marital sex scenes with their male lead characters. Would never have happened, and yet those purer, unforgettable dramas had excellent high ratings, especially compared to the sad 3 to 4 percent ratings that this turkey garnered. They also became world famous, deservedly so, and are still cherished and watched today by K-drama fans! This drama will soon fade from memory.

I think the first time screenwriter here in The Forbidden Marriage, Chun Zi Hye, lacked the K-drama writing experience to make this drama truly interesting, unique, and compelling; she based her script on her own webtoon, so right from the beginning the action in the story seemed rather cartoonish. There was obviously no one to tell her, "Maybe you shouldn't write the scene like this for the drama" or "Maybe you shouldn't have the characters do that in this drama." Because I lost interest so quickly in this story I won't spend a lot of time on describing it, like I usually do with other reviews, but just give you some basic plot points. My recommendation would be to skip this drama, and instead check out the best historical drama ever made, Chuno aka The Slave Hunters. That's a top sirloin steak dinner at the best restaurant in town, and this one is a paper plate combination of hash and SPAM that you eat while sitting at home falling asleep in front of the television set. 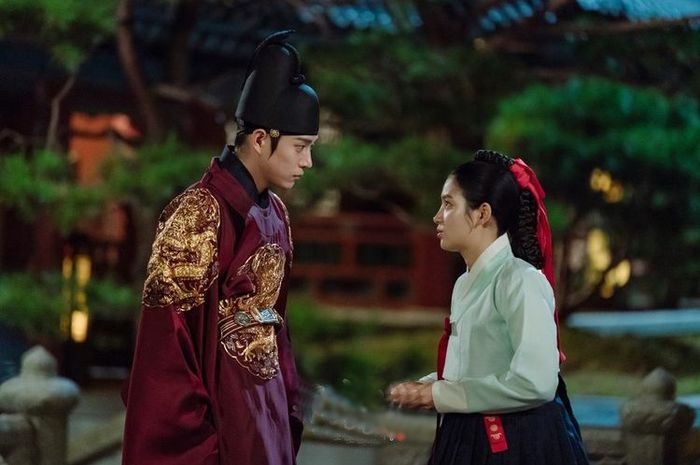 A young Joseon era King named Lee Heon (fictional, played by Kim Young Dae) tragically loses his beloved wife An Ja Yeon (Kim Min Ju) to death under mysterious circumstances, and for seven long years he can't get over her loss, and even sees visions of her in different places in his palace from time to time, often even engaging in conversations with her, too! During these seven years some of his family and other government entities try to get him to marry again, presenting him with Queen candidates to consider, but Lee Heon couldn't care less about any of them. Plus they too always seem to disappear once they are considered seriously for marriage to Lee Heon. Obviously there are villains at work in the Kingdom, but who could they be? 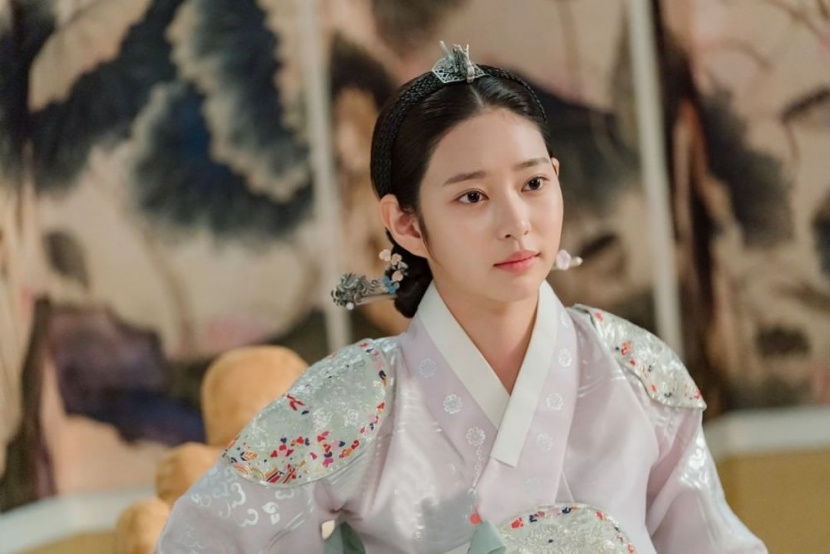 The First Love Who Disappeared


This mentally disturbed King, in response to this mystery, declares an official Edict preventing all new marriages in his Kingdom while he remains unmarried, which infuriates the general citizenry to no end (and rightfully so!). This ridiculous ban on marriage goes on for way too many years! (If marriage candidates were disappearing why not do something smart and seclude the candidates in a special section of the palace under 24/7 protection by guards, rather than deprive an entire Kingdom of marriage!??? Duh-uh!). Lee Heon hides in his palace 99% of the time and sleeps a lot. He knows there are people in the extended royal family who have certain ideas about whom he should be forced to wed, a situation he doesn't like to dwell on, since he isn't close to these extended family members, and he remains unable to move on from the love of his life.

Then one day Lee Heon hears about a woman named Ye So Rang (Park Ju Hyun, from A Piece Of Your Mind) who claims she can channel the spirit of his dead wife. He brings her to the palace and tries to meet that spirit through her. So Rang, a scammer and a thief who has to lie constantly to survive, is glad to oblige and she pretends to channel his lost love. The disturbed King is shaken to his core, but begins to find So Rang attractive as she pretends to be his dead wife! He offers her protection to live in the palace (why couldn't he have done that to all the marriage candidates who were at risk of disappearing?). Meanwhile he is still seeing visions of his dead wife in odd places around the palace. Talk about a fictional old Joseon era King who needed modern psychiatric care desperately! (In the beginning I kept wondering if this dude had schizophrenia!). It doesn't even occur to him for the longest time that these visions might actually be faked by people who don't have his best interests at heart. 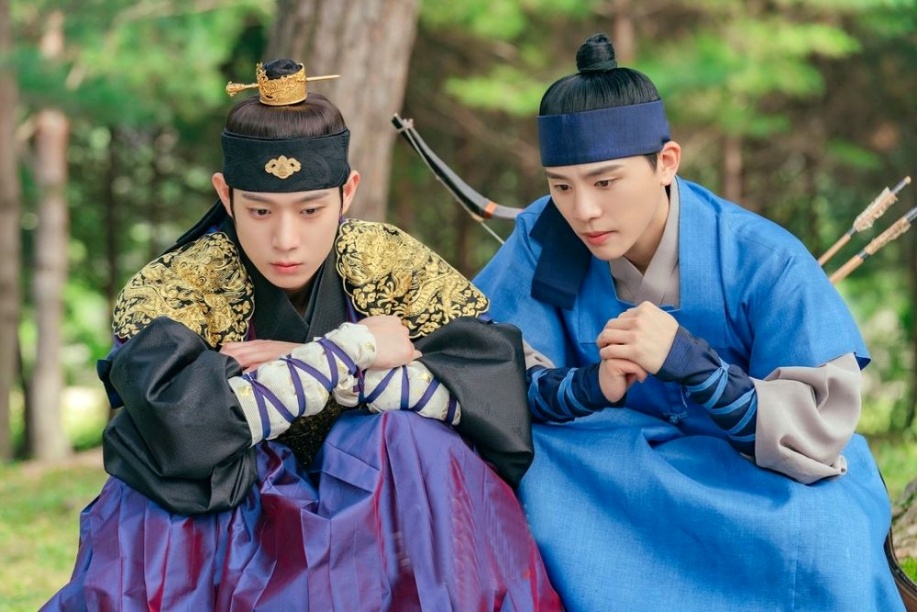 The King does have one long time friend in a police officer / bodyguard named Lee Shin Won (Kim Woo Seok). This man has risked his own life in the past to protect his friend the King. He can sense that this woman So Rang is a swindler and a liar, though he does find her attractive too (not sure why: once this character of So Rang enters the palace the makeup and costume people didn't do a great job on the actress' appearance, making her look fatter than the King, and in close ups never wiping the sweat from her face before scenes were filmed! Since this actress in real life is a true natural beauty that made no sense to me at all). Later it is revealed that So Rang had once been engaged to this officer because she supposedly had some royal blood herself (another plot device that bored me, it could have easily been left out). What would be so wrong with a story where a Royal King or his Royal police officer fell in love with a commoner? Now THAT would have been original!

Before entering the palace, to scam the King, So Rang had used essentially stolen money to buy a cafe. Now she doesn't even bother running it but leaves it to acquaintances. This supposedly free-spirited girl could have finally benefited by making her own money running a business, but no. She's not interested in that. Not really. Then she makes the big moral mistake of sleeping with the disturbed King, who, get this, tells her she should do it so she can get pregnant and then be made his next Queen without objections! Any moral woman would have immediately left the palace at such a sinful proposition. A man who truly loves a woman wants to do right by her, not wrong by her; he would want to do everything regarding marriage and sex in the right and proper order. (I thought to myself, "Someone should go back in time and play that good old rock song for them, "If You Like It Then You'd Better Put A Ring On It!". What a dumb girl!). Of course once this happens, and the King's enemies know he has fallen for her, then even more violence is strongly possible against her in future in an attempt to prevent this marriage from taking place. Could it succeed? 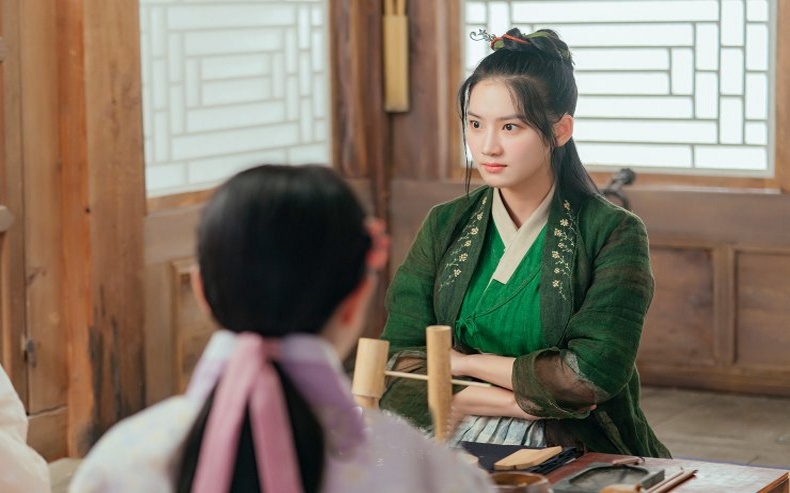 Marriage To A Disturbed King
Won't Solve Your Problems, Girl!


At this point I started to check out of this story and honestly fast forwarded through the last episode and its predictable mess to the ridiculous conclusion which glossed over and didn't deal with any of the characters' serious moral and mental flaws that were brought up during the foundation of the drama. Gah! I was so relieved when this one was over. Even the nasty Squid Game had a better ending than this turkey! My advice? Skip this drama and protect your OWN sanity. The actors did try their best here, but it was the writing that stunk to high heaven. Glamorizing sin does not appeal to me, and many other long time K-drama fans like me.

I really enjoyed some of the comments I saw online from people on K-drama sites who agreed with me about this story's weak contradictions. Like this one from someone named Tasha (it's even funnier because it's written in broken English  - not all K-drama fans around the world are proficient in English as a primary language). I'll let Tasha sum this series up with Bingo Precision. :)


"Yeah yeah I thought miss lady didn't wanna be the queen, she sure did put herself in the position to be though, I knew she is no different from the rest, it only takes common sense she was hiding from people that want to kill her, now baby girl you going to have more enemies more than ever -  every meal you eat from now on will have to be checked, not to mention dealing with all the king's many future wives, girl I thought you wanna be free like a bird, drama still not good story, is lame and too predictable."