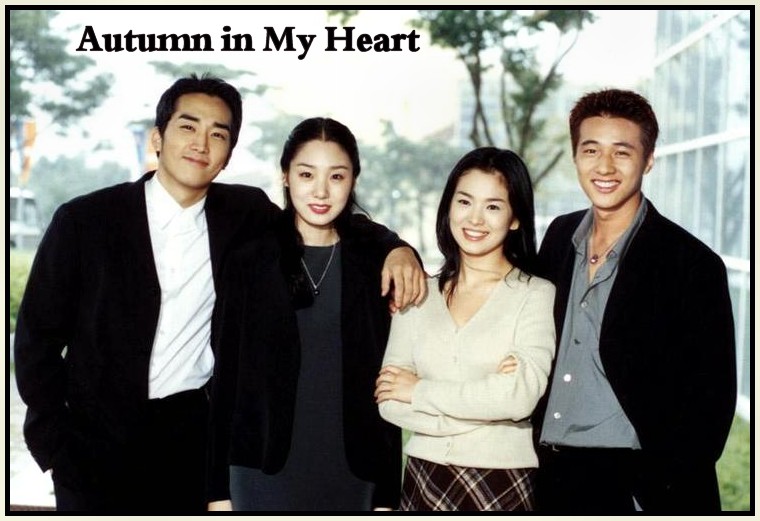 Autumn In My Heart (2000) was one of the first Korean dramas I ever watched and I remember crying buckets of tears. It was a landmark Hallyu series that had close to 46% viewership ratings in Korea and other Asian countries; its popularity is credited with launching the "Korean wave", the overseas popularity of South Korean media shows and pop culture. Full credit for beginning this phenomena must go to legendary K-drama director Seok-ho Yoon, who directed all "Four Seasons" dramas, plus Love Rain. He has a unique romantic view of life, judging from the interviews I've seen of him, and these bittersweet philosophies of his show up in all these dramas. He knows how to bring out the best in his actors. Even today "newbies" to K-dramas often watch Autumn In My Heart and cite it as one of their favorite shows, so even fourteen years later, as I write this in 2014, it is still popular among fans! You can't say the same about many other shows. Besides the fantastic acting and direction the musical soundtrack is also memorable, particularly the song "Reason" and a gorgeous piece by Kevin Kern called "Le Jardin" (The Garden).

The Story: The story is sad from the beginning. A little boy named Joon-suh Yoon is brought to see his new baby sister in the hospital and while the father leaves the boy alone in the nursery for a few moments the little boy starts to play with the name cards on the incubators and two fall down to the floor. A nurse comes by and accidentally switches the name cards while putting them back. Two families are never to be the same again.


The story skips to the teenage years of the two main characters, who believe they are brother and sister, and who are very close to one another: happy go lucky Eun-suh Yoon (Geun Young Moon in an absolutely brilliant performance as a youngster), and the kind and gentle Joon-suh Yoon (Woo-hyuk Choi). They are the children of a Professor named Kyo-soo Yoon and his lovely wife Kyung-ha (Eun-sook Sunwoo). They are a very happy family with none of the usual problems families with teenagers face. They smile and joke with one another and Eun-suh makes all the family members their own mugs with their portraits on them.


Then one day after school Eun-suh gets hit by a truck and needs a blood transfusion, which leads to the Professor and his wife discovering that Eun-suh is not their biological daughter. Their biological daughter named Shin-ae (Ae Jung Lee) is the child of a very poor woman named Soon-in Kim (Hae Sook Kim) who owns a run-down cafe in town. Shin-ae is the exact opposite of Eun-suh: bratty and whiny and always seeking attention. When she finds out she is the biological daughter of parents who are much wealthier than the woman who raised her she has a tantrum and demands to become part of the Yoon family.


Eun-suh finally learns the truth when the weeping Shin-ae reveals it in a dramatic scene, with everyone standing around looking crushed. Eun-suh goes off by herself to cry and Joon-suh finds her and tries to comfort her. Grief-stricken, Eun-suh has to decide if she will stay with the Yoons or go to her biological mother and live with her. After a lot of tears she decides on her own to go live with her biological mother, and Shin-ae moves in with the Yoons. These scenes are some of the most difficult to watch in the drama, especially when Eun-suh takes out the cups she made for her family and has to split them up. I think that is my favorite scene in the entire drama. Because it is all so difficult to live in the same town now, the Yoons take Shin-ae and Joon-suh to live in America, and Eun-suh remains with her biological mother in Korea and helps her run the cafe. The scene where the Yoons drive away with Eun-suh weeping in the background gets me every time. Geun Young Moon will break your heart in this drama. It's no wonder they chose her as the little sister for the classic Korean horror film A Tale Of Two Sisters three years later.

Years go by and the grown up Eun-suh (beautiful Hye Kyo Song) still thinks about her long lost "brother" and misses him. Joon-suh is now grown up (Seung Hun Song) and comes back to Korea with a fiance to marry named Yoo-mi Shin (Na-na Han). But in the back of his mind he yearns to look for Eun-suh, his long lost "sister". He rides his bike around their favorite old haunts and tries to locate her.

Eun-suh has also never forgotten Yoon-suh. She now works as a receptionist and maid and has attracted the attention of a handsome tenant named Tae-seok Han (Won Bin). She still lives with her mother in humble surroundings. It's Eun-suh who recognizes Yoon-suh from a distance and she follows him to where he is walking on the beach with Tae-seok and Yoo-mi. Eun-suh runs up to him and gives Yoon-suh the biggest back hug you've ever seen and they have a joyous, tearful reunion.

At first Yoon-suh hides the truth of their history together from Yoo-mi and Tae-seok, but of course it eventually comes out (secrets never stay secrets forever in K-dramas!) and we end up with one messy quadrangle, as it is obvious to everyone Eun-suh and Yoon-suh have feelings for one another that go a lot deeper than brother - sister. Tae-seok falls in love with Eun-suh and Yoo-mi has to suffer jealousy while watching Yoon-suh's ever growing attachment to Eun-suh. 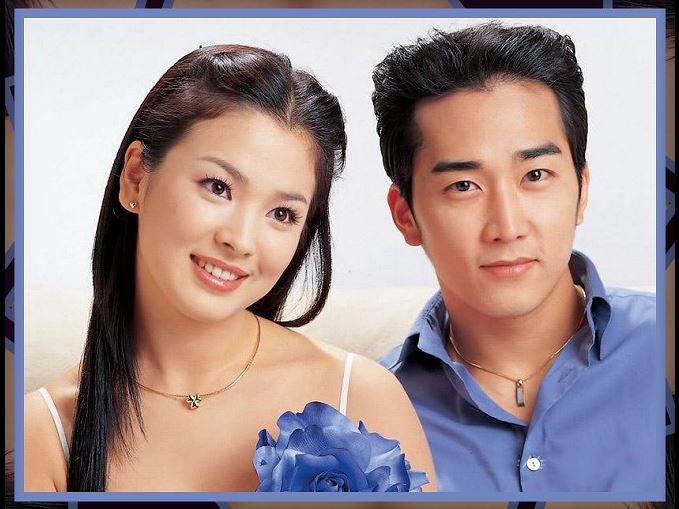 Have you ever seen a more beautiful couple in your life?

Then Eun-suh is diagnosed with a terminal illness and she tries to hide it from Yoon-suh. It's Tae-seok who gives her the most moral and financial support she needs to try and beat the illness. Tae-seok really graduates from being a jerk in the beginning of the show to being someone we would all want to take home to Mother!

The ending is pure tragedy, and I remember being very angry at the last few scenes of the drama. I thought that certain promises should have been kept by Yoon-suh. It's odd that I did not feel angry at the end of I'm Sorry, I Love You, when the character of Eunchae made the same decision that Yoon-suh does in Autumn In My Heart. I thought about that difference in my reaction for quite some time and I came to the conclusion that I must feel that men should be stronger than women. It may not be fair today, but there it is, and I cannot change my feelings because they aren't politically correct.

I remember I had the DVDs for Autumn In My Heart mailed to me from Netflix a number of years ago. Unfortunately those days are long gone, they no longer ship the discs to you, nor do they have Autumn In My Heart on instant streaming. Nor do they offer Winter Sonata for rent or streaming anymore, nor Spring Waltz or Summer Scent. How sad that it's more difficult for new K-drama fans to find and enjoy the classic K-dramas that started the Korean Hallyu wave two decades ago.

So I think your best bet for watching Autumn In My Heart in the best quality is to buy a DVD set on Amazon.

Don't forget the hankies! You'll need them, I promise.