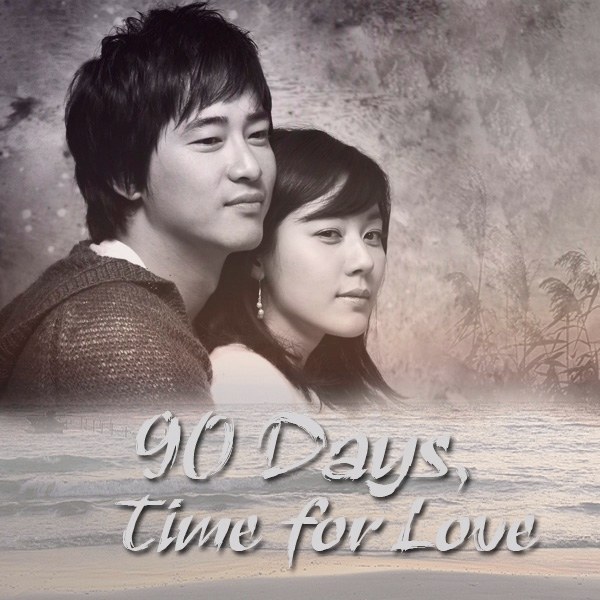 This theme of forbidden love by two blood relations has been done to death in Korea and by this 2006 show, 90 Days, Time For Love, it was almost to the point of tedium. The actors tried hard but the script was so boring and unoriginal that I felt I had to hold my eyes open with clothespins to stay awake!

Even if a story is dull I at least pay attention to a K-drama's OST (original soundtrack) but here not a single melody stood out to me during the entire run. So far, although I have loved Kim Ha Neul to bits since she appeared in the lovely time travel film Ditto (2000) and I also enjoyed her performance in the K-drama Road Number 1 (2010) with So Jisub, and Stained Glass (2004) with Lee Dong Gun, I can say without equivocation that her best Korean drama is A Gentleman's Dignity from 2012. That's the one you should watch first if you are her fan.

As for the male lead in 90 Days, Time For Love, Kang Ji Hwan (Lie To Me, Hong Gil Dong) he's never been a particular favorite of mine, although I recognize he's a decent enough actor, he just doesn't float my boat, if you know what I mean. The ONLY scene I have ever found him sexy in is the famous Coke kiss scene in the romantic comedy Lie To Me. Most of that sexiness there came from his leading lady, Coffee Prince actress Eun-hye Yoon who is fabulous in everything. Lucky the leading man who gets to act opposite her! (You too, Park Shi Hoo!) :) 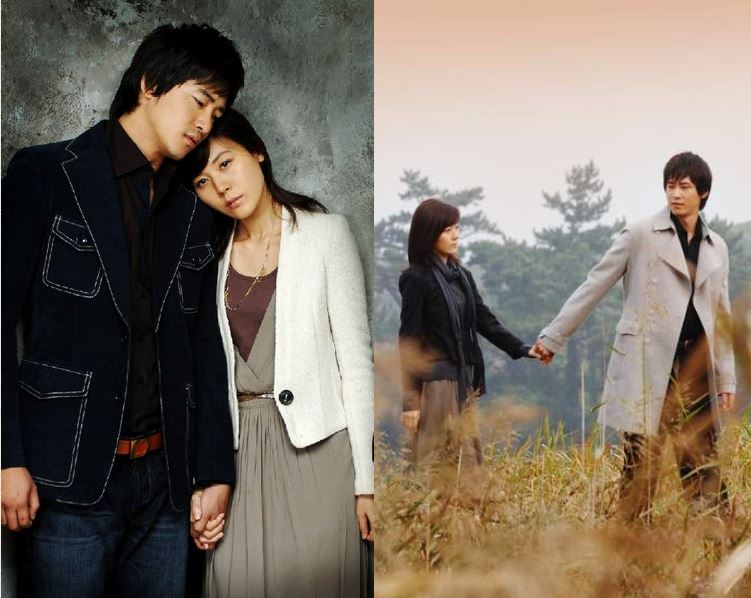 The story begins with two attractive young people in high school who are drawn to each other, a partially deaf young lady named Mi Yeon Go (Kim Ha Neul) and a rather boisterous and popular young man named Ji Seok Hyun (Kang Ji Hwan). Whenever they get a chance to talk to each other she has to move her hair away from her bad ear in order to hear him properly, which makes her the butt of jokes in the male population of the school (immediately turning me off to them!). She rides on the back of his bicycle and they enjoy nature together.

However, their carefree romantic time together in high school is brief. Mi Yeon's grandmother dies, and she discovers that the grandma had an illegitimate kid and that Ji Seok's taciturn father is actually her uncle, and that Ji Seok is her cousin! Oh no! It doesn't matter that in the course of world history many cousins have married each other, this situation in modern Korea means a doomed romantic relationship between two blood cousins, and they are forced to separate. Ji Seok's father moves the family to Seoul, and Mi Yeon is alone and lonely for many years, dreaming of her time with Ji Seok and unable to move on emotionally.

Lovely actress Hye Young Jung made this drama for me, as the long-suffering wife of Ji Seok (Kang Ji Hwan)
who tries to hold on to her family, knowing her husband loves his cousin. This actress is superb in everything!


Both of them go to college and graduate and start dating other people. Ji Seok finds a pleasant young woman to date whom he is attracted to, but doesn't seem to love in the way he loved Mi Yeon. Her name is Jung Ran Park (fantastic actress Hye Young Jung from Playful Kiss and Gu Family Book) and she falls deeply in love with Ji Seok, not realizing his heart has always longed for another. When a chance opportunity on a street brings Ji Seok and Mi Yeon together after several years, and their faces are struck dumb staring at each other in shock, Jung Ran looks on innocently at first, and is told later that she is just an estranged cousin to him. After the encounter, Mi Yeon privately hates on him, "He's dating already? He's forgotten me." The anger subsides soon into sadness for Mi Yeon. There's no hope for them, she thinks, and she finally tries to move on and starts dating a nice insurance salesman named Tae Hun Kim (Hee Suk Hyun). He falls head over heels with her, and she goes through the motions of liking him.

So here is our typical quadrangle forming and both Mi Yeon and Ji Seok go on to marry the two people they don't really love, while privately they still yearn for each other as much as they did in high school. Why do Koreans love these kinds of stories so much? They just mean heartache and pain. I want to be INSPIRED when I watch K-dramas, not feel down in the dumps. 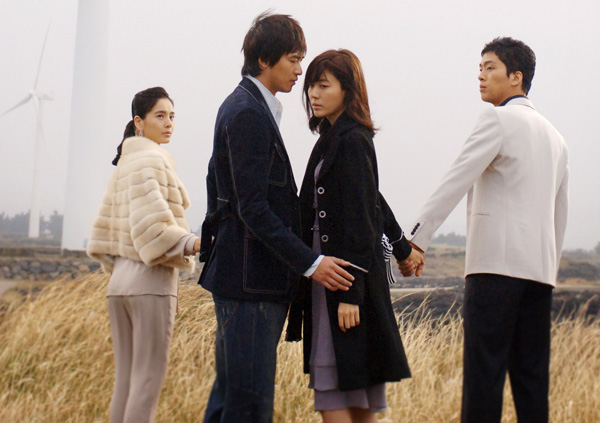 All this sets the stage for a loooooooooooooooooong and tiresome on again, off again forbidden love and rare moments of togetherness for our main couple. Ji Seok even goes on to have a daughter with Jung Ran his wife, but even that fails to domesticate him toward home and hearth. Then both Ji Seok and Mi Yeon discover they are seriously ill and need to be put in hospice. The 90 days is the time they have together secretly -- or not so secretly -- until one, or both of them, bite the dust permanently and take the bus to heaven (yes, the bus!). When the time is up Jung Ran begs Ji Seok to come home with her and their daughter and he reluctantly goes, giving a final glance backward to the love of his life in the hospice. Meanwhile, later, Mi Yeon's husband, the bland insurance exec, incredibly tells her he doesn't mind if she loves Ji Seok and hugs her. Is this The Twilight Zone?

I love Kim Ha Neul but you can pretty much skip this one and not miss anything. The actors are good but the writing is poor.