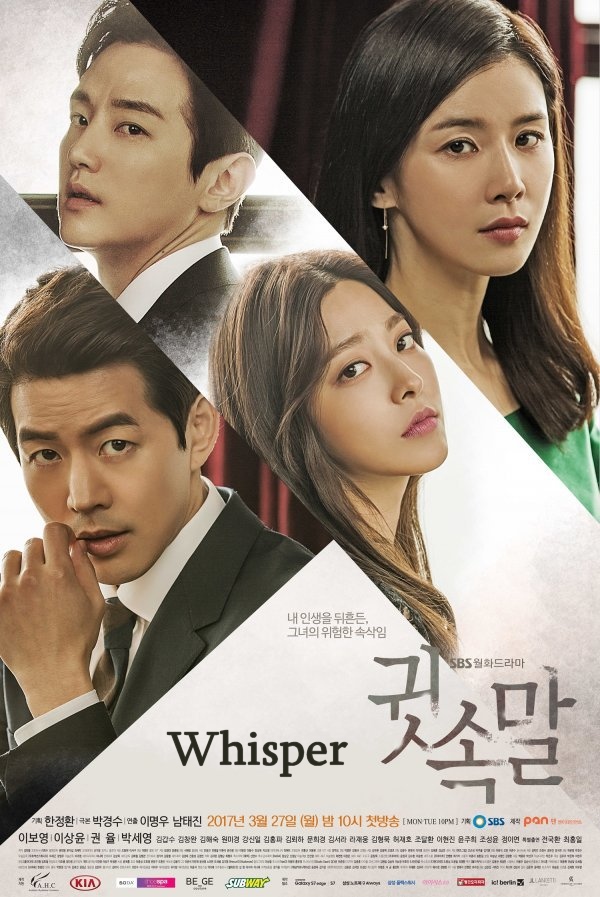 All through this drama I kept thinking, "This is the perfect K-drama for my childhood friend Alison. No one smiles, no one cracks a joke, no one is amused by anything, it's all back-stabbing, revenge melodrama". That's just the way she likes them. ;)

I'm different though; I need at least a few characters who seem warm, friendly, funny, and admirable. I need someone to root for. There are none here, not even the two leads whom I am crazy about, Lee Bo Young (I Hear Your Voice, God's Gift: 14 Days) and Lee Sang Yoon (Angel Eyes, Liar Game, Twenty Again). In fact, if this show didn't have these two leads (who had worked together in an older 2012 drama I haven't seen called My Daughter Seo Young) I would have cleared out after episode one. Heck, episode one even had a sultry bed scene at the end, almost unheard of in K-dramas! I knew I was in for it but I thought I'd keep going out of curiosity, to see if their characters would mellow out and improve. Maybe the Korean people felt the same way because the ratings were very respectable to high for this show, especially in the Seoul area. Are there that many corrupt attorneys and judges in Korea that the Korean populace are that intrigued by them? ;)

This is something different, I justified to myself, and I have to watch something that dares to be different, even if I end up not liking it all that much. Some episodes were intriguing and interesting, some were over the top, others kind of dragged, but I kept going to the end just for Lee Bo Young and Lee Sang Yoon. I guess the sophistication of the program kept me coming back for more. This is no bittersweet, romantic I Hear Your Voice, or Angel Eyes, it often felt more like the old movie Dial M For Murder. LOL! 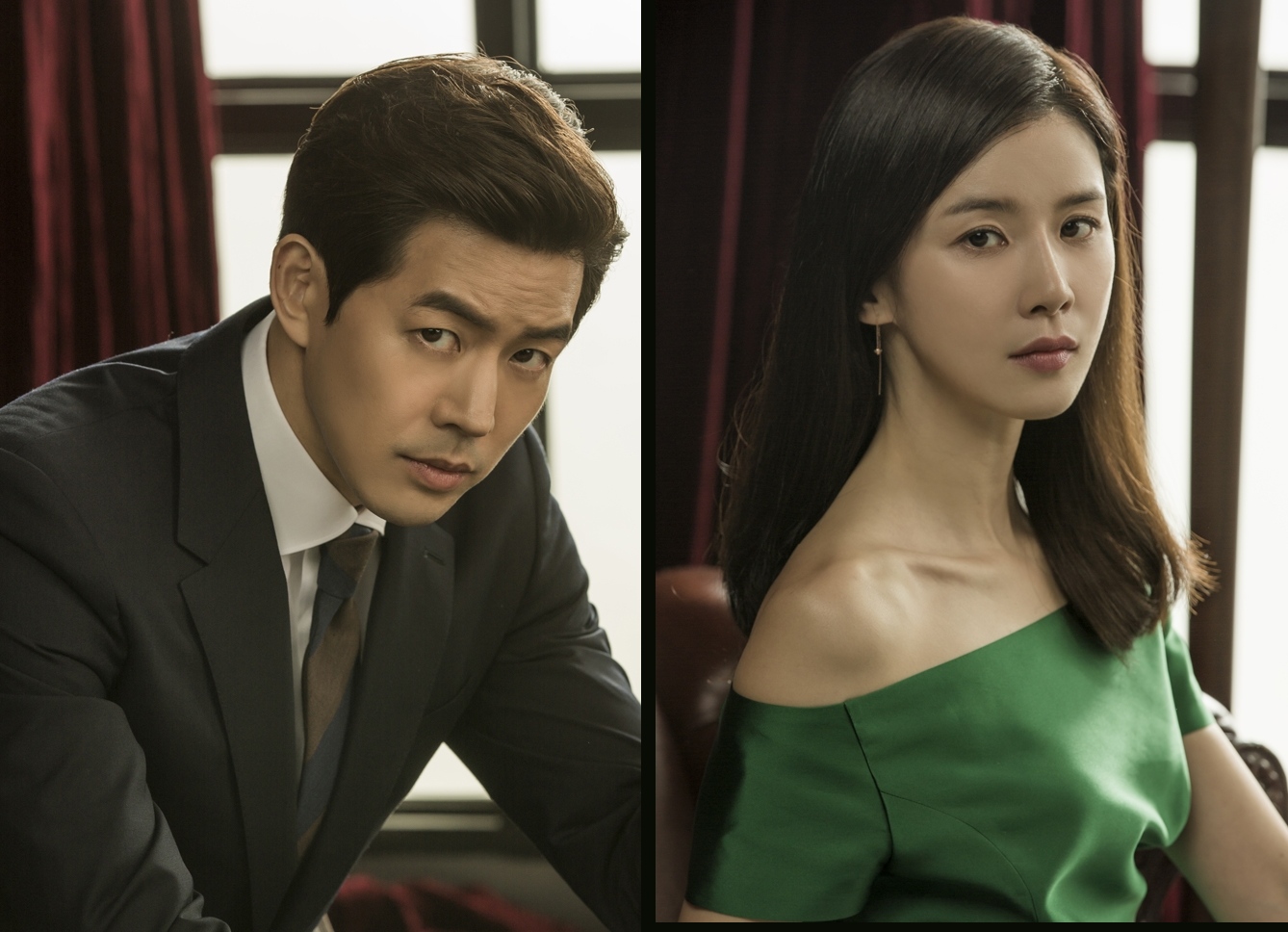 The Story: We begin to follow the life of no-nonsense policewoman Shin Young Joo (Lee Bo Young) who is a hard-working section chief police officer passionate about her career. Her father Shin Chang Ho (Kang Shin Il) is also a policeman but he had gotten himself in debt recently and a long time male friend who was a reporter working with him on a secret case had helped him out by temporarily loaning him $30,000. One night while Chang Ho is driving his reporter friend calls him in a panic, saying someone is trying to kill him, and Chang Ho rushes to the waterside where his friend had told him he'd been chased, only to find his reporter friend dead already in the water with a broken fishing pole plunged into his chest. He cries and screams and tries to call the cops but his cell phone slips and falls into the water, just like the victim's cell phone had done; presumably precious evidence is lost with both cells submerged in water. 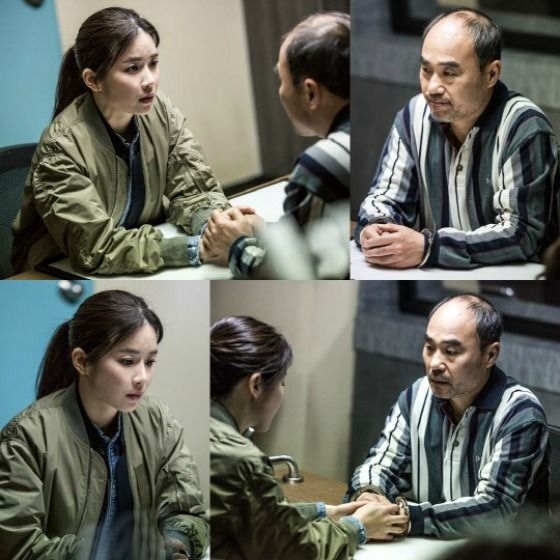 
Police arrive anyway and quickly arrest Chang Ho for the murder! When Young Joo finds out her father has been arrested for murder she asks what was his motive and the police show her evidence of the money the victim had loaned her father and they suggest her father didn't want to pay it back and that's why he killed the man. With apparently no other witnesses to the murder (which we later find out is a bunch of hooey), and her husband in jail, Young Joo's mother (Hae Sook Kim, who played Lee Bo Young's mother in I Hear Your Voice, too) is devastated, blaming herself for depositing the money to pay off debts and in the hope Young Joo could use some of it to pay for a wedding someday with a cop she works with who likes her, named Park Hyun Soo (Lee Hyun Jin). 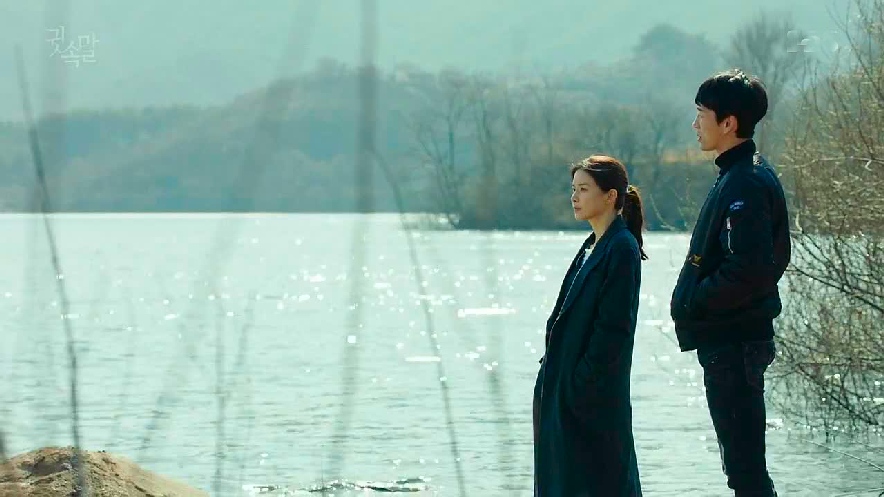 
With her family facing terrible legal and financial difficulties, Young Joo has to find the best assistance for her Dad at the lowest cost; he remains locked away in jail on no bond. She is told the judge assigned to her father's case, Lee Dong Joon (Lee Sang Yoon) is the most fair judge available, and that she is lucky to have him. "Rest easy", she is told, "He won't find your father guilty if there is any doubt." Young Joo is reassured. 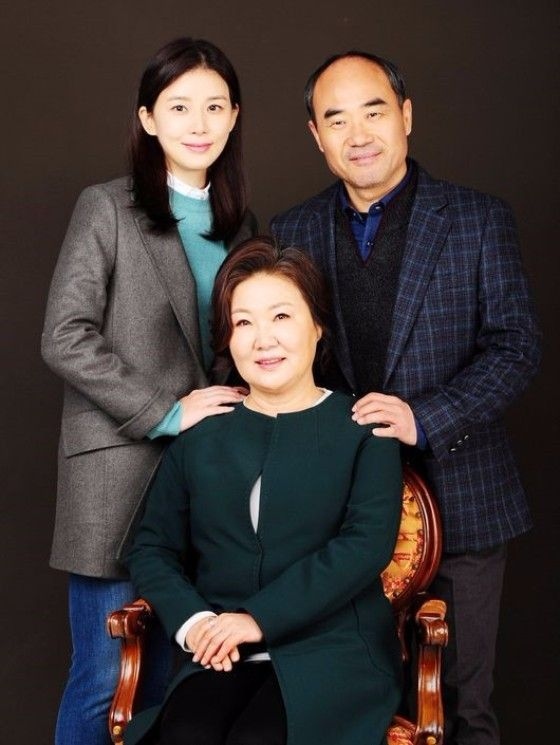 It's An I Hear Your Voice Reunion!


Although Lee Dong Joon is known to be a virtuous judge, and has a willingness to help weak, poor people who need legal assistance, he has been receiving pressure from his higher-ups who are disturbed he has ruled against the son-in-law of a Supreme Court Justice, giving him the harshest sentence for embezzlement possible under the law. The Supreme Court Judge vows revenge against Dong Joon and arranges behind the scenes for his removal as a judge because of that verdict.

Dong Joon is told by the head attorney at the highly influential and powerful Taebaek Law Firm, Choi Il Hwan (Kap Soo Kim), that if he rules against Young Joo's father during trial that he won't lose his job as a judge, but if he finds the man innocent he will be removed as judge. This once fair judge begins to vacillate for the first time. He's worked really hard his whole life to become a judge. Should he give it up just to save one man? Ah, the moral decision of a lifetime.

What Dong Joon doesn't know is that Taebaek Law Firm has been majorly corrupted by defense and state department money used to swerve verdicts in many cases so that it would help certain politicians succeed professionally as well as cover up their dirty deeds. Young Joo's father and the dead reporter had been investigating all this corruption and that's why they really wanted to get rid of him with a false verdict of murder, to put him behind bars permanently so that he could no longer investigate anything. Il Hwan also wants to marry Dong Joon off to his flirty daughter Choi Soo Yeon (Park Se Young, Faith, Beautiful Mind) who has an interest in him. He won't be able to placate his daughter if Dong Joon remains virtuous, only if he sells out. What a Dad!

With his job on the line, instead of doing the right thing, this once "fair" judge Dong Joon succumbs to corruption himself and brings in a verdict of guilty against Chang Ho, Young Joo's father, with manufactured "evidence"! Young Joo is devastated and she vows revenge. She comes on to Dong Joon, gets him drunk till he's practically unconscious, and then takes video of them in bed together. Now she has something really potent to blackmail this once fair judge with. 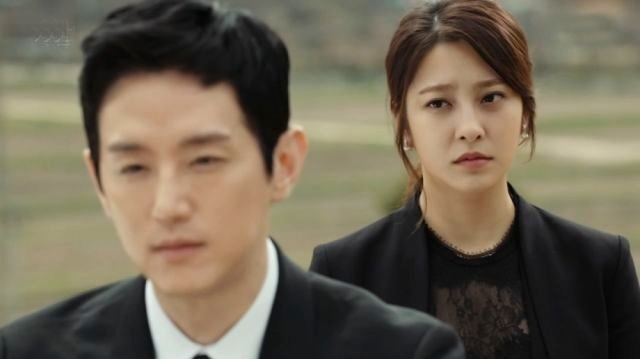 Soo Yeon Keeps An Eye On Kang Jung Il
Another Corrupt Partner In The Taebaek Law Firm
Who Wants To Destroy Dong Joon .. I Wonder Why?

The next morning when she reveals this evidence to him he is under the gun and has to accept her terms: she wants to work for him as his legal secretary so she can keep an eye on him and try to get evidence on why he came in with a false verdict against her innocent father. Maybe her Dad's future appeal can go a different way eventually if she can get necessary dirt on Dong Joon! 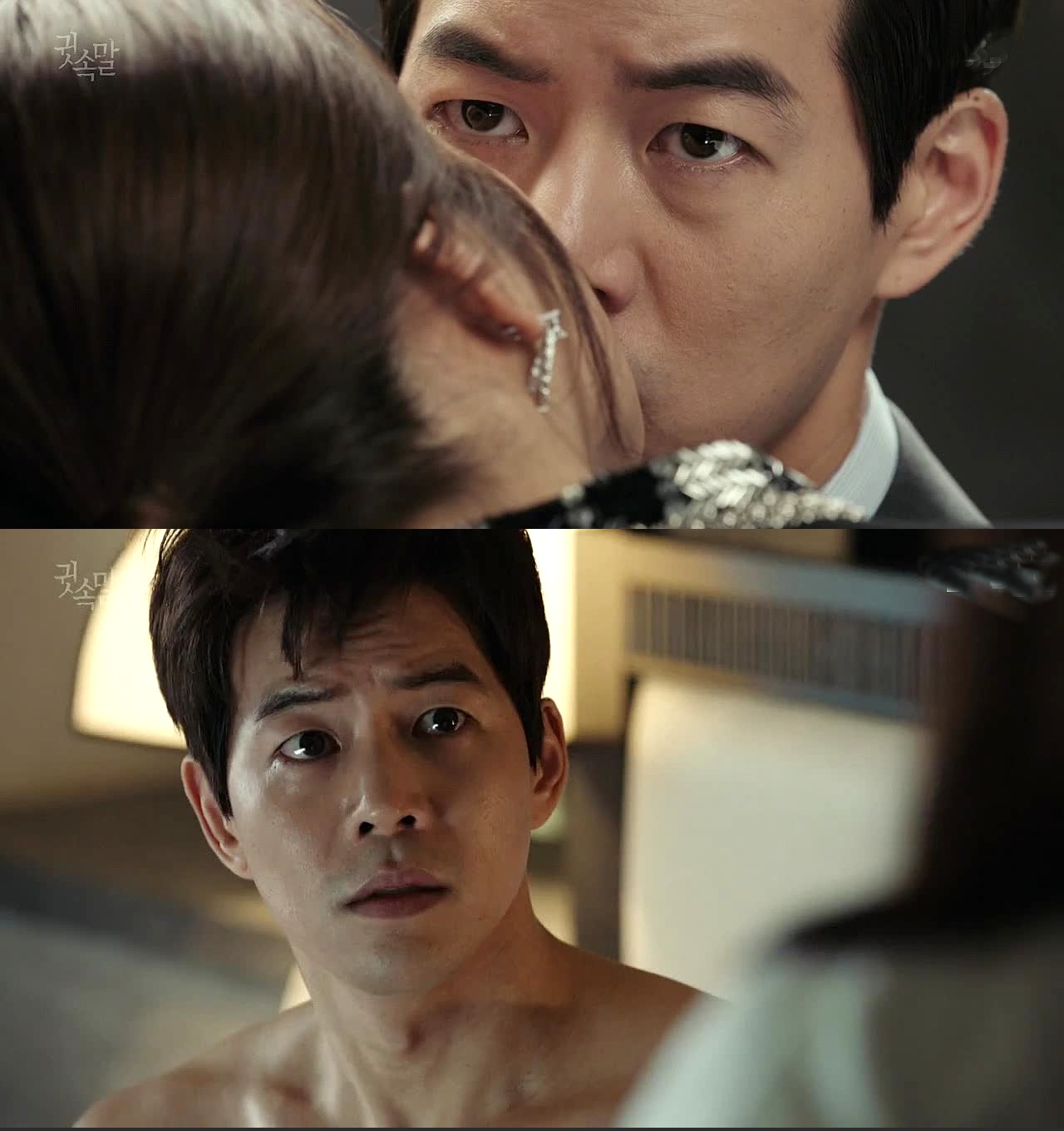 The Face of Guilt

Under pressure, figuring he's already sold his conscience to the devil so what difference does it make anymore, Dong Joon agrees to let Young Joo work for him under a different name (also thinking it's better to keep your enemies close to keep an eye on them, too), and he also goes through with a loveless marriage to Soo Yeon, Taebaek Law Firm's head attorney's coquettish daughter. She proves to be a wild card since she's not in love with him and can see him more clearly than he sees himself. Dong Joon also agrees to remain silent about the identity of his new legal secretary; every time he is about to do something underhanded, or to increase his own power as a judge, she threatens him again with the video of them in bed together. 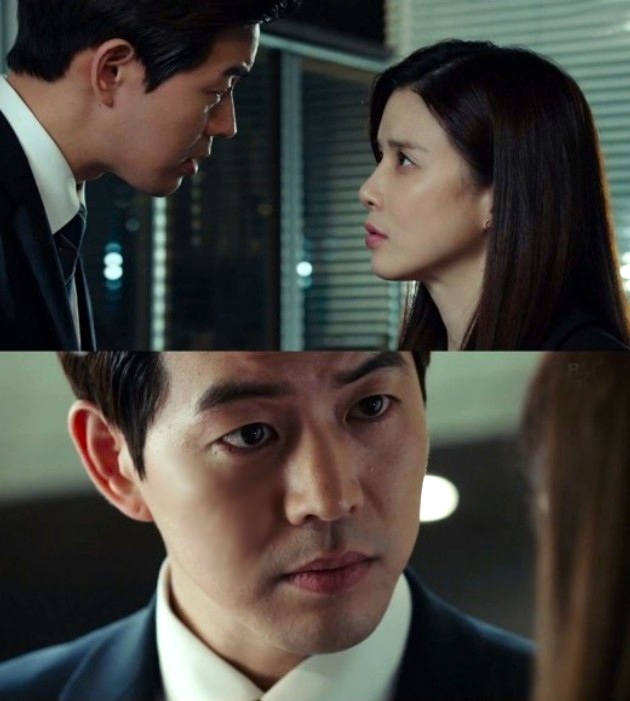 Will both Young Joo and Dong Joon ever change for the better and combine forces honorably to uncover corruption at Taebaek, the nation's largest and most influential law firm? Will they ever discover who actually killed the reporter? Will Dong Joon ever have to pay for his false verdict against Young Joo's father? What happens if that one night stand between them produces a pregnancy? Will they start falling in love with one another whereas once they mistrusted one another and desired revenge against each other? Will this drama ever change from Peyton Place to Rebecca Of Sunnybrook Farm? (If I were you I wouldn't count on it!). ;)  Oh well, enjoy the Eye Candy, if nothing else. I look forward to watching these actors play better characters next time! 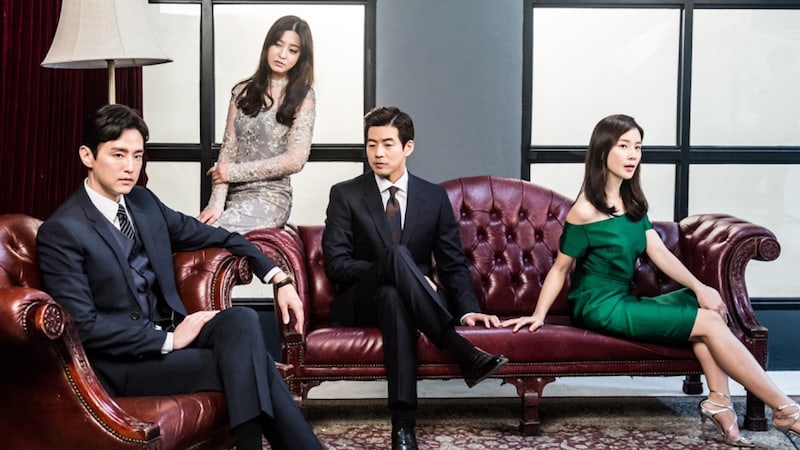