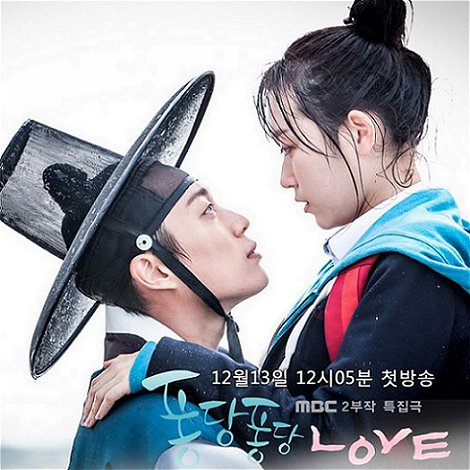 Splash Splash Love (2015) was only 2 episodes and would probably appeal to an average 12 to 15 year old, but this old lady found it rather painful, tedious, silly, and predictable. As I type this I have finished 245 Korean dramas, and let me assure you, a typical K-drama writer could have written this thing in his or her sleep! The only folks who would rave about this unoriginal embarrassment are those who are new to K-dramas and don't know any better.

This show is a time travel romance, where a high school student named Dan Bi (Kim Seul Gi from Flower Boy Next Door, Discovery of Love, Oh My Ghostess) who hates math, falls into a magical puddle of water after running away from school because she is afraid to take an end of the year math test, and she lands in the Joseon era. (Ho hum).

The King Lee Do (Yoon Doo Joon) thinks she is a boy (of course!) and becomes close to her/him because even though she's bad at math in 2015 she suddenly seems an expert in the Joseon era, and teaches the King complicated algebra problems. (Gee, maybe I should have tried some time travel to get better math grades in high school, too. I always hated math - although I did get straight A's in algebra and trig, by some miracle - maybe a King loved me in a distant time, too? LOL!). 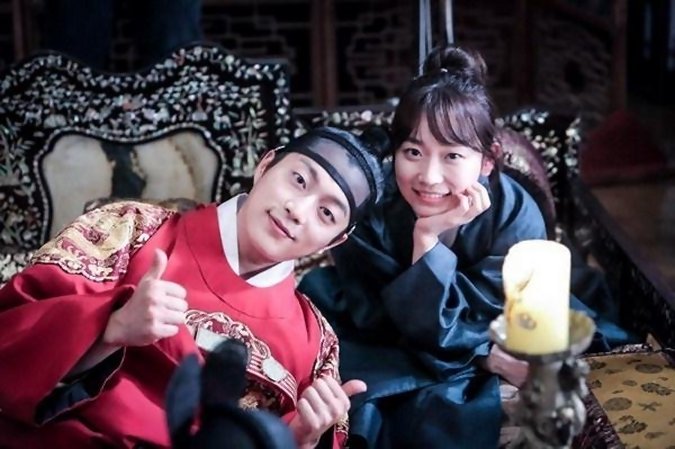 The King is grateful to the math skills of this "boy" and keeps him close to him, which makes his wife, the neglected Queen Sohun (Jin Ki Joo) jealous. (Don't blame her one bit). The King's courtiers also don't trust his growing reliance on this "eunuch". There's also the typical cutie pie second male lead to make a triangle love situation. His name is Cheajik (Ahn Hyo Seop) and he develops a crush on her/him, too. (rolls eyes).

Then comes the stupidest bit of all, which I guess is supposed to be funny: second male lead puts Dan Bi (whom he knows now is a girl) on his horse to escape from court ordered murderers, and she leans down and gives him a pen knife (about 2 or 3 inches long) for defense. Off she goes on her horse singing Gangnam Style (ARE YOU KIDDING ME???) while he fights off 6 murderers with huge swords --- with his little pen knife --- and KILLS THEM ALL WITH IT! LOLOLOL!!!! CALGON, TAKE ME AWAY!!! 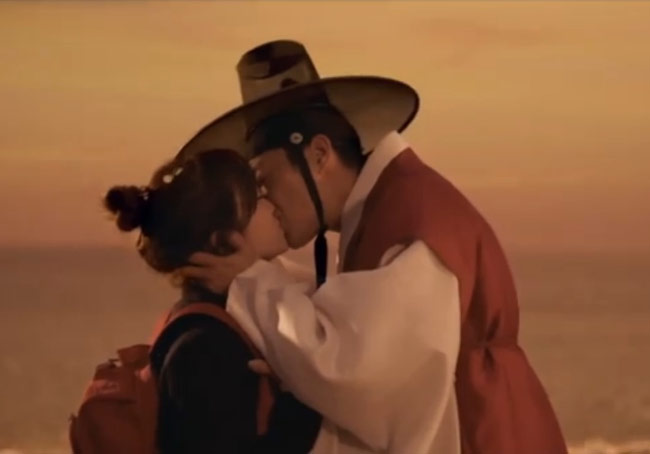 A womanizer King kisses an innocent high school girl,
WOW! something to celebrate? NOT!

Thankfully, before I could fall asleep on this boredom, it ended: Dan Bi returns to the modern day, and the King stays behind in Joseon (which is only right because he has a WIFE!).

The end made no sense and the writer was stealing details from the K-drama Big, with the yellow umbrella and the King coming to the 21st century looking for her/him, finding her on a bus and following her in the rain. Never mind the fact that her friend told her this King Sejong in real life had many wives, concubines, and 20 children! He makes goo goo eyes at her in the modern era and suddenly she's a goner, her thinking cap soaked on her dumb airhead, thinking he's the cat's meow! By this time I was throwing pillows at my TV set and grunting "COJO!" ("Go away!"). LOL!

Take it from me, this is one to skip if you value the quality of your brain cells. But if you need a cure for insomnia it's just right.