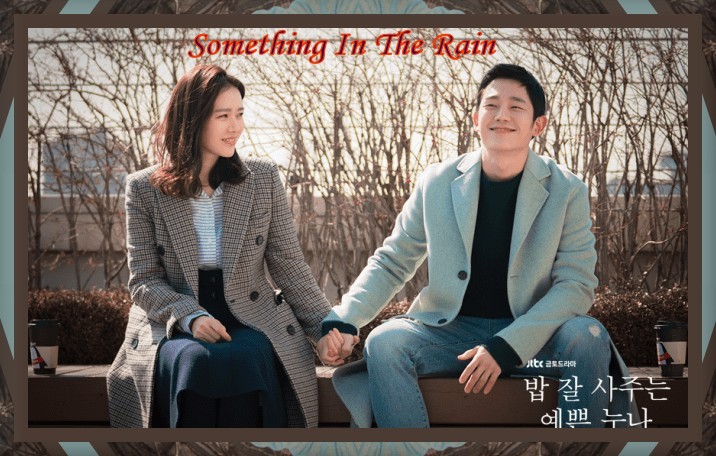 A fun drama romp for my favorite actress Ye Jin Son, in which she is paired with a cute younger actor, Jung Hae In, Something In The Rain (2018) was Ye Jin's first drama in several years, since her magnificent performance with Nam Gil Kim in Shark (2013), a drama which I graded A+. In general she tends to make more films than dramas and I will watch Ye Jin in anything because she's always fun and a delight to watch, can make you laugh one moment and cry the next moment. That's the kind of acting talent that comes from almost twenty years of seasoning / experience. She was also quite generous on many occasions in this drama to step back and allow the younger actor to grab the limelight from her in many scenes, and toward the end to play the bad girl at times so that the audience's sympathy would naturally fall to the younger man.

It seems in this drama set up that this actor impressed a lot of young girls in the audience, judging by comments I've read online, and he will probably go on to make even greater dramas in future because of his exposure in this one to new, young K-drama audiences. In my opinion he can largely thank Ye Jin Son's professionalism which helped him shine. All in all, however, I much prefer to see Ye Jin in stories where her male lead is her contemporary, like Nam Gil Kim (Shark), Woo Sung Jung (A Moment To Remember), Cho Seung Woo (The Classic), Seung Hun Song (Summer Scent), So Jisub (Be With You), Go Soo (White Night), etc. In melodramas she really gets to sink her teeth into superb stories that are deeply multi-layered and unforgettable.


Although there were many enjoyable scenes here and the show proved quite addictive (fun to marathon) there really wasn't much new or unique in this story: you had your typical Noona Romance, older woman, younger man (like Ye Jin had had in Personal Taste with Lee Min Ho); she works in a coffee business and he is a video game creator (those professions have been done to death in Korean dramas -- time to come up with some new ones, K-drama writers!), she has an ornery (mentally disturbed in my opinion) mother who complains a lot, a rather useless younger brother who seems to spend most of his time playing video games (yawn), and a rather wimpy father who doesn't stand up to his wife as much as he should when she gets on her high horse. To sum up, if Ye Jin Son had not been in this drama I'm pretty sure I wouldn't have watched it. She makes everything instantly better simply by her fun presence alone. 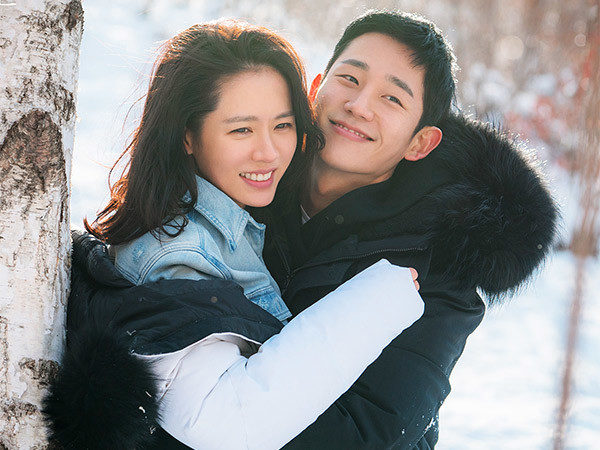 Pretty and capable Yoon Jin A (Ye Jin Son) is a single career woman in her mid 30's working in the planning and administrative department of CoffeeBay, a franchise coffee company. She lives at home still with her aging parents, bored housewife-mother Kim Mi Yeon (Kil Hae Yeon) and retired father Yoon Sang Ki (Oh Man Seok), who doesn't seem to do much but lounge around in his pajamas and watch TV all day, and her younger brother Yoon Seung Ho (Wi Ha Joon) who doesn't seem to do much with his life either but play video games.

This is a typical family set up in Asian countries though not typical in the West: grown children living with their parents to take care of them as they age, but when a daughter is a grown career woman in her 30's with her own modern ideas about life and love, that can end up presenting problems with her more traditional parents down the road when she wants to assert her independence. (Better to do this earlier than later anyway, in my opinion). 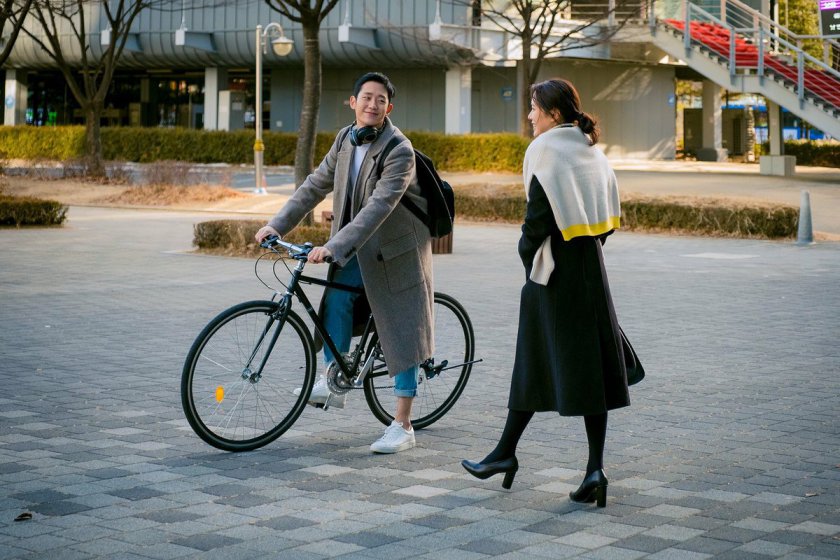 Her brother has a friend since childhood named Seo Joon Hee (Jung Hae In) and while he was away a lot from Korea for his job as a video game designer he hadn't seen much of his friend's older sister Jin A as she matured and became prettier. He returns, they spot each other accidentally while she is leaving work and he's riding a bike, and they start to joke around with each other a lot, without seeming to realize that their increased playful familiarity with one another might lead to more intimate feelings down the road. Joon Hee is also the younger brother of Jin A's best female friend Seo Kyung Sun (Jang So Yeon) and so when the two female friends are together they often naturally see Joon Hee hanging around.

Jin A had just come off a broken relationship with a troubled rich man who had cheated on her, named Lee Gyu Min (Oh Ryong), and she is vulnerable to someone who is kind to her, flatters her, and plays around with her in joking ways, like her brother's friend Joon Hee. Her mother, however, is furious about the breakup with the rich dude, and becomes even more furious later when Jin A and Joon Hee announce they have feelings for one another. It was as if a mini earthquake erupted! Everyone's nerves become shattered.

In the meantime Jin A and Joon Hee had become intimate (I got a kick out of the fact that in that scene the American classic movie Singin' In The Rain was playing on the TV in the background!) and that makes their situation even more precarious emotionally. Figuratively and literally the rain begins to come down in torrents on top of them, from all the engulfing emotions they are experiencing. 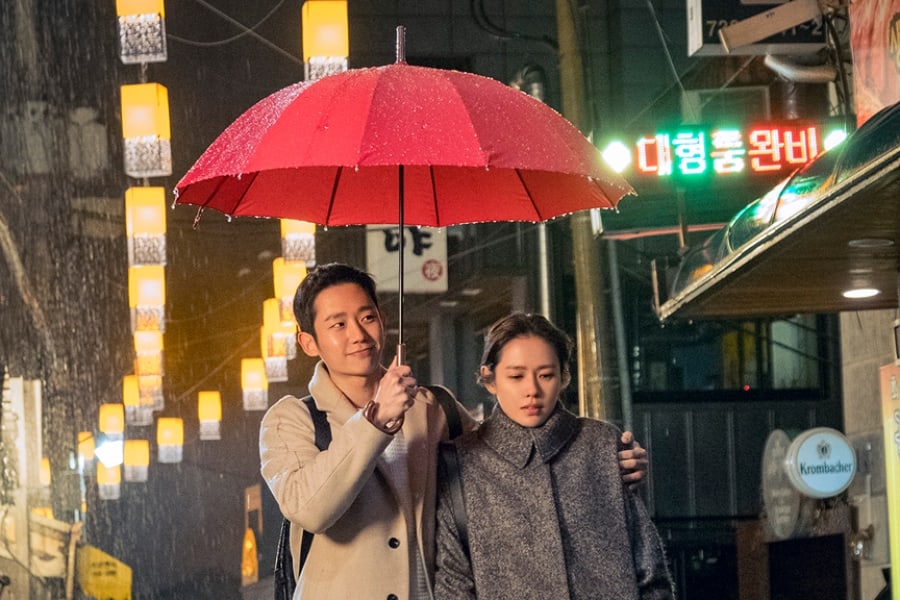 Jin A gets to the point where she has to decide whether she will listen to her meddling, angry mother, who desperately wants her to marry a rich man, or contemplate possible marriage with Joon Hee instead, defying Mom. Several events take place which seem to push her into one direction, toward independence (which I thought she should have done 10 years earlier! by 35 I had already been married and had 4 children!), like renting her own apartment for the first time, and giving Joon Hee a wider berth emotionally. However, although she makes these constructive changes in her life she doesn't seem all that happy about them.

In addition it doesn't help matters when Joon Hee's and Kyung Sun's long absent father (Kim Chang Wan) reappears in his and his sister's lives and tries to have his opinions listened to about his son's possible marriage with Jin A. When Jin A is kind to his father as a matter of basic Korean respect for elders, Joon Hee goes into a rage, since his father had long ago cheated on his mother which had caused her early death. Things just seem to go from bad to worse and Jin A and Joon Hee eventually break up. Will there ever be any chance for them to reconcile?

Some might say this drama was more realistic than many others out there, and there's some truth to that, but sometimes the typical K-drama plot cliches and tropes were too transparent as well. There's never smooth sailing in any K-drama relationship, it's always bumpy, always filled with cliffhangers which keep you guessing. That's how the writers keep you hooked. 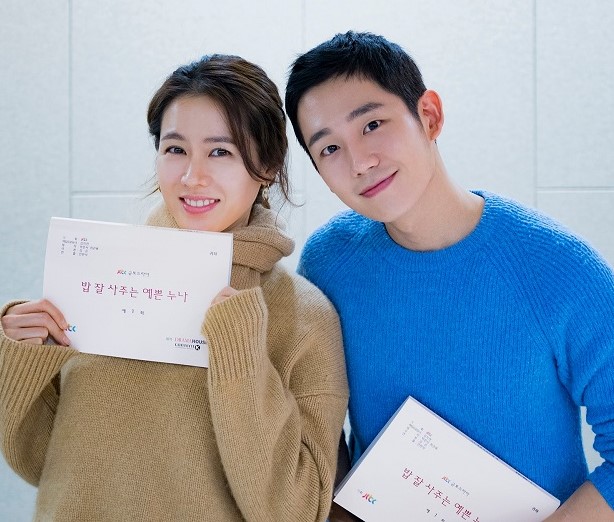 One big disparity that does bother me in the K-drama world is the fact that in almost all Noona Romances (older woman, younger man) the writers never seem to have any problems showing a natural physical relationship developing between the main couple, but when it's a plot with an older man and younger girl, like in My Mister (which ran about the same time on the schedule as Something In The Rain), they never show the relationship growing physical. Such a double standard and THAT is not realistic.


If you like mostly light-hearted romances, with a splash of turmoil thrown in to keep you on your toes toward the end, then definitely check out this drama. It has a lot going for it ... for me, three little words can sum it up: Ye Jin Son. :)