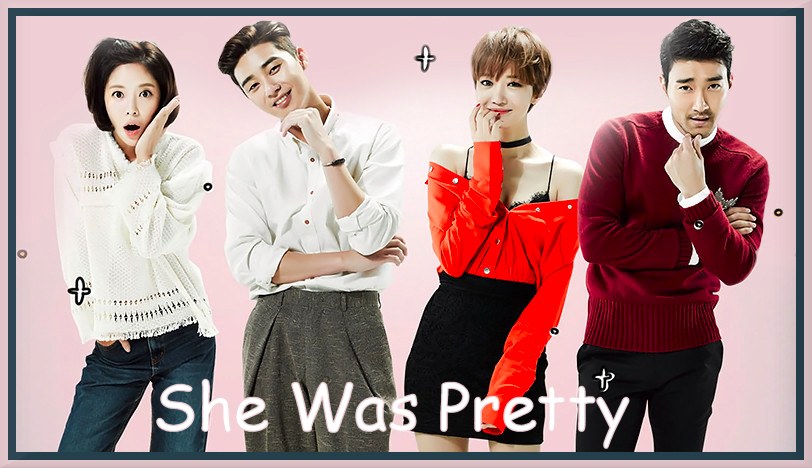 Yet another "first love" Korean drama story, She Was Pretty (2015) started off somewhat fresh and original, with a main heroine who was a sympathetic waitress with low self-esteem because of bad rosacea on her face (an angry red skin rash condition genetically inherited), but then by episode twelve the drama lost its original excitement as the writers made the stifling, unoriginal choice of having her end up with her boring childhood sweetheart, a man who rarely smiled and who treated her poorly, until her real identity as his childhood sweetheart came out in the open, instead of the fun and effervescent second male lead who charmed the hearts of the vast majority of female viewers of this show, judging by the majority of comments favoring him while this show was running. He treated her like a princess, gently called her rosacea "freckles", made her laugh and forget her troubles. Who would you choose to fall in love with? A handsome Comedian, or Mr. Cardboard? In this show I had the worst "2nd Male Leaditis Syndrome" I've had in years! I knew there would be a slim chance he'd win the girl, but had a small sliver of hope I'd be wrong. Actor Siwon Choi I've loved since Spring Waltz way back in 2006. It was amusing to me to see how many people were finally discovering him as an actor for the first time, after over ten years of his acting experience! Suddenly he was a hit. Too funny.


I guess Korea just finds it practically impossible to make a unique, realistic choice that would please the audience the most, and they constantly fall back on the old stale formulaic trope of having "first loves" find each other again after years of separation since childhood, have them butt heads in the beginning to mask their attraction to each other, and then finally reveal the truth of their identities which results in a love relationship, at last. Yawn. Yawn. Yawn. Korea literally has been doing this for over 20 years in their K-dramas! What is this obsession they have with "first loves" anyway? Most people do not end up marrying their first loves, they grow up and move on and find others to love as they mature and expand their horizons. 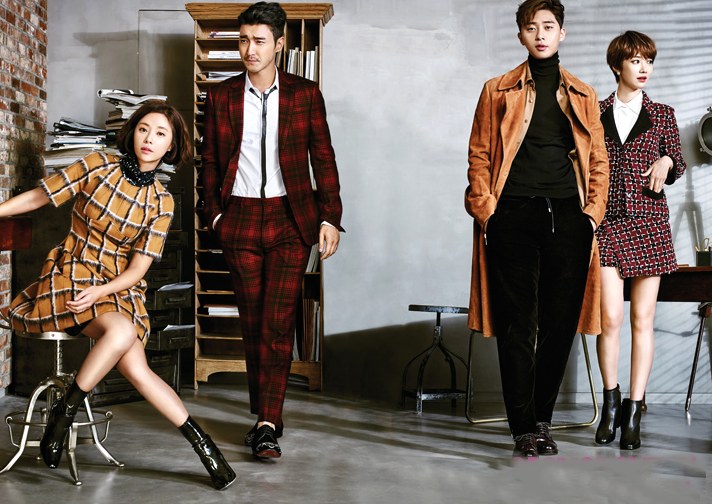 What made it worse here was that the actor who played the second male lead, Siwon Choi, was due to enter the military a week after the show ended, so we were not going to see him act for two years. They couldn't have given him a proper farewell by letting him win the girl in this show? Argh! He did in Oh My Lady, which was adorable. The last four episodes of She Was Pretty were complete washouts (unless Siwon showed up in a scene), so much so that I heaved a great sigh of relief when this show finally ended! In the first twelve episodes this was an A show; by the time it finished it was a B show in my opinion. The cliches were coming thick and fast at a nauseating rate. Even the very last shot was a cliche. Screenwriting Class 101 in how to ruin a promising television show. 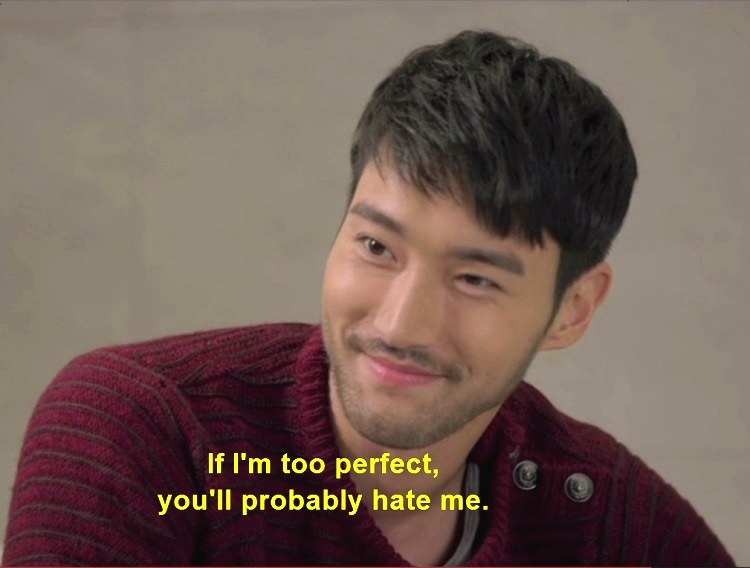 
Nice and kind Hye Jin Kim (Da Bin Jung as the young version, Jung Eum Hwang as the adult version) grew up a very pretty young girl in a rich family. She was known for her thoughtfulness and she protected the weak who were bullied at school. She even made best friends with a shy chubby boy at school named Sung Joon Ji (Han Yeol Yang as the young version, Seo Joon Park as the adult version) who was often ridiculed by classmates. He of course develops a crush on her. Time moves on and the two children are ultimately separated from each other; Sung Joon moves to America with his family and Hye Jin remains in Korea.

When her father's publishing company goes bankrupt, Hye Jin's life changes permanently to one of hardships instead of luxuries. She can no longer go to college. There go her dreams of becoming an author of children's books. Even worse, after her father dies she discovers she has inherited from him the skin disease of Rosacea and she develops the permanent ugly red rash all over her cheeks. Her self-esteem plummets and she decides to forgo wearing makeup or to seek treatment for her skin condition. She lets herself go. Meanwhile, little chubby Sung Joon grows up to be a handsome thin young man who is well educated and becomes a successful magazine editor.

Years pass and Sung Joon contacts Hye Jin and tells her he is returning to Korea for a job at Most magazine company, which focuses on designer fashions for men and women. He would love to meet up and remember old times with her. The two decide to meet again as adults in a public place, but Sung Joon is unable to recognize Hye Jin because her original beauty is gone. He walks right past her. When she sees him she is shocked at how attractive he is, no longer fat, and very much poised and confident compared to her. 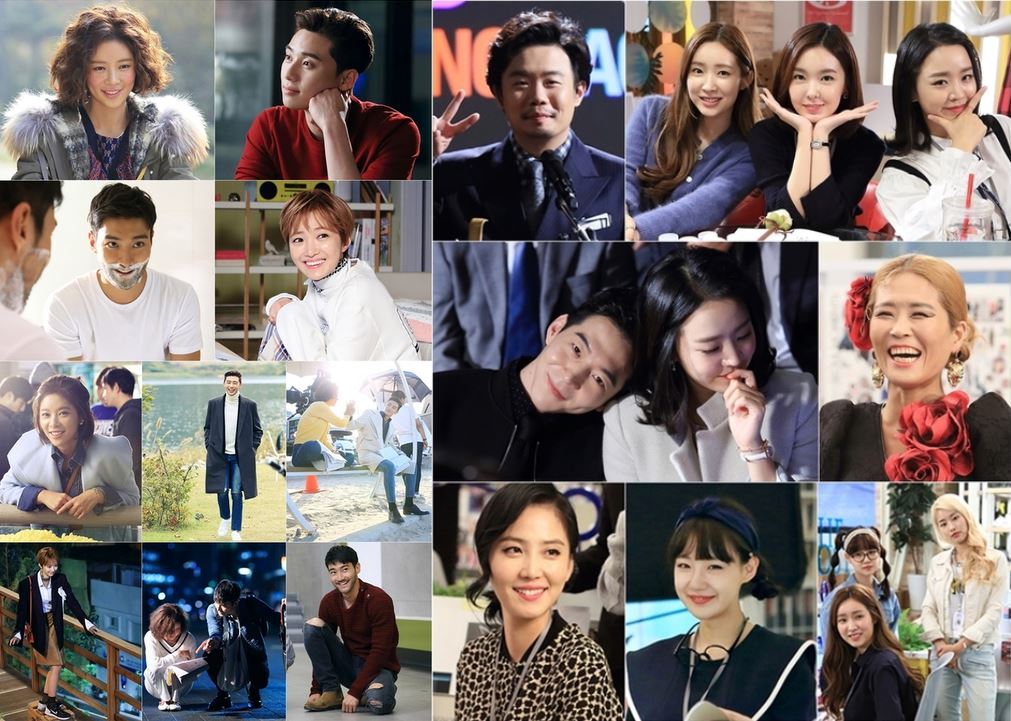 The many cast members of She Was Pretty

Hye Jin hides behind a sign and quickly calls her best friend who is strikingly attractive, Ha Ri Min (Joon Hee Go) and begs her to do a favor and appear in her place as "Hye Jin", so Sung Joon can't see how unattractive she has become since they were children. The plan works and Ha Ri as "Hye Jin" goes to dinner with Sung Joon, while the real Hye Jin sits at a nearby table and signals her friend what to say to sometimes tricky questions posed by Sung Joon. Who says pantomime doesn't come in handy today?

Soon even more complications set in: the real Hye Jin is hired to work at The Most magazine publishing office where Sung Joon is the deputy chief editor. He openly mistreats and belittles her for her clumsy awkward nature at work, not knowing that she is his real childhood friend. Ha Ri also continues to meet Sung Joon, and soon falls in love with him, a situation she keeps hidden from Hye Jin. 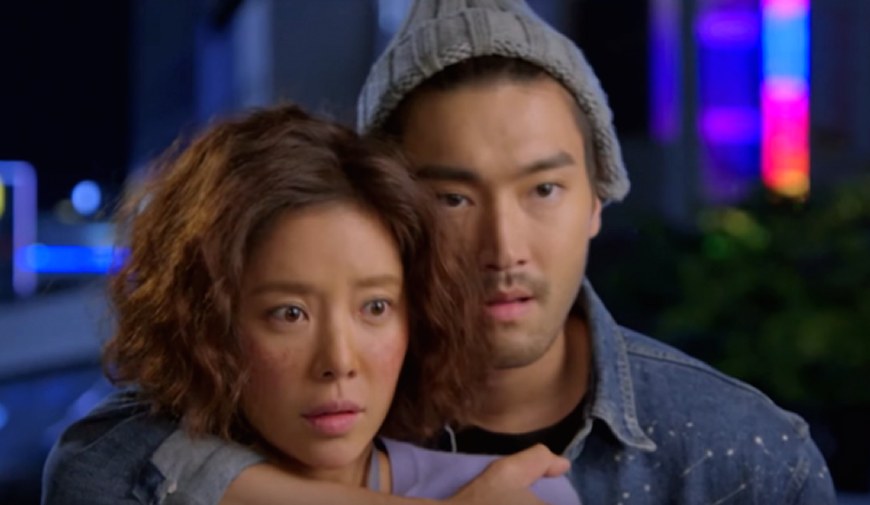 Siwon knows how to make you cry as well as laugh

Ironically, Hye Jin finds a new good friend in her workplace, her direct boss, Shin Hyuk Kim (Siwon Choi), who slowly falls in love with her. He can see she is having a difficult time at work, always frazzled and unhappy, and he bends over backwards to make her smile and laugh, to take care of her needs both physical and emotional, while Sung Joon scowls at her from afar. He has his own pet name for her "Jackson", and is always concerned for her happiness and welfare.

There are all kinds of supporting players in the show who are fun to watch but their characters never over-dominate the main story of the typical love quadrangle developing between Shin Hyuk, Hye Jin, Sung Joon, and Ha Ri. Will Hye Jin ever find out that Ha Ri has fallen in love with her childhood friend? What will Sung Joon do when he finds out the real identity of the woman in his office whom he has been belittling for weeks? The company itself is in dire straits and might not survive. What will that do to all the deepening relationships of these co-workers if the company has to shut down? 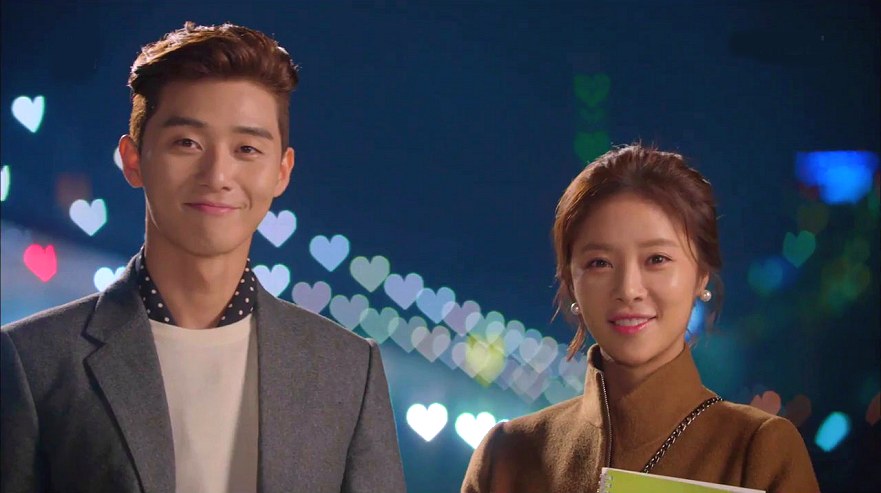 Is this Kill Me, Heal Me
or She Was Pretty?

Through everything, actor Siwon had me laughing out loud with his many antics; he was my favorite character by far. When they neutralized him in episode 12 I honestly never re-captured my original interest in the development of this story. It was kind of refreshing that not just one but TWO men fell in love with a woman with a burning red rash all over her cheeks and I thought the writers might branch that story out, but they were so not concerned with the issue that they didn't even call her skin condition by its proper name. They had an opportunity to teach people about this common skin condition but instead they simply put makeup on her eventually and it looked to magically disappear. When will Korean dramas finally wake up and realize they don't have to create fantasy elements in romantic comedies to make them successful, but can deal with characters' real emotions and situations realistically instead?

My biggest issue in this show was the writers. They couldn't think outside of the endless "first love" box, and they lacked guts to give the majority of viewers what they wanted: Siwon as the winner of the girl. There was always the shadow of Kill Me, Heal Me behind She Was Pretty, because the two lead actors were in that show together. The writers never had any intention in breaking that pair up for Siwon, no matter how fantastic he was in his part, no matter how much feedback they received that Siwon was mopping the floor with everyone else in the acting department. So go into this show knowing that you are probably going to be depressed by the end, when it had such incredible promise at the beginning! Watch it for delightful Siwon alone! 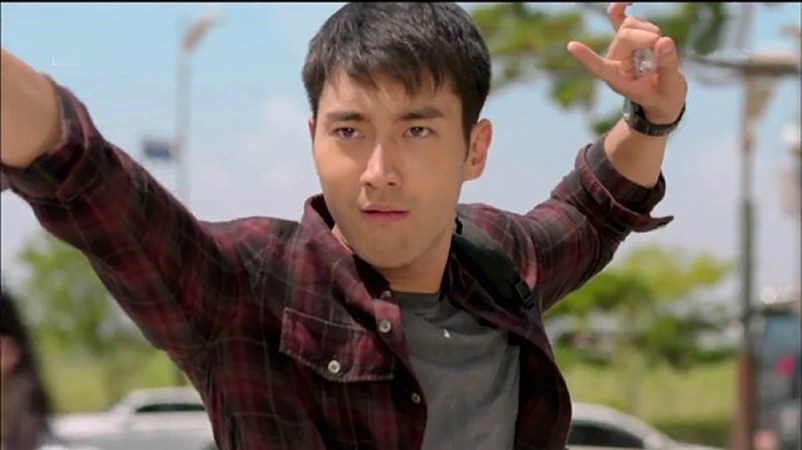 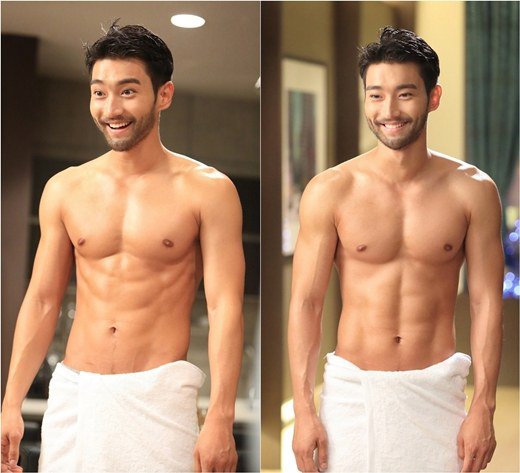 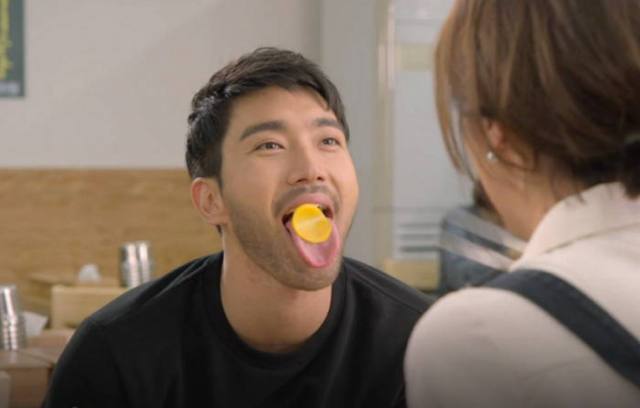 A new way to eat chips! 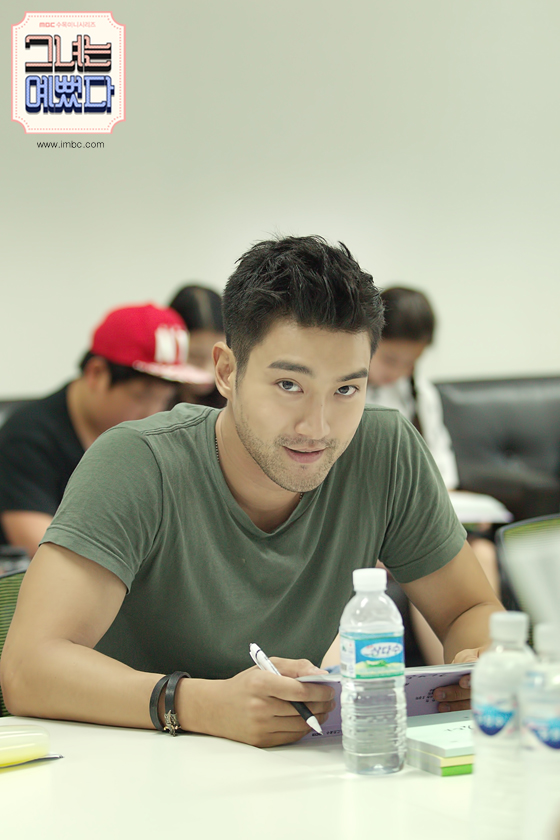 Siwon At Script Reading
Doesn't it look like he can
see right through you? Sigh 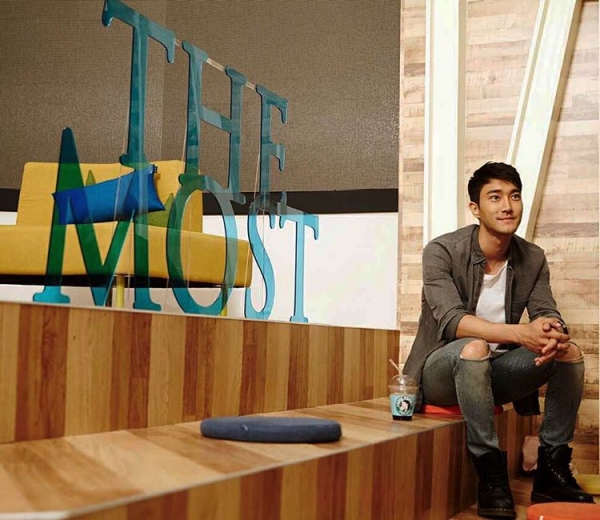 The MOST Charisma In This Drama