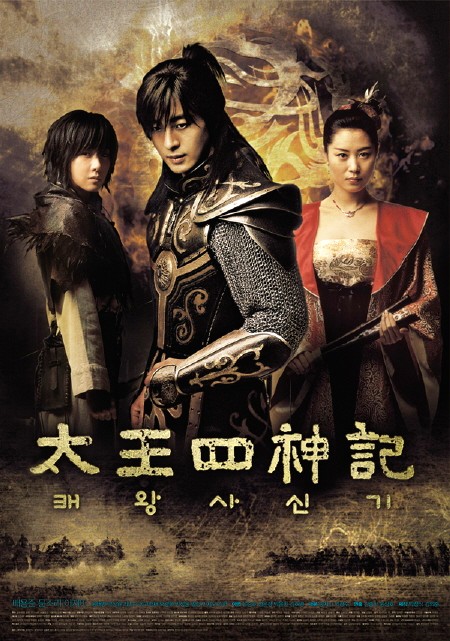 I am not going to pretend to know all the historical folklore and legends of Korea that gave rise to this astounding Korean drama The Legend (2007 aka "Story of the First King's Four Gods"), a drama with the most intense visual imagery that I have ever seen. It rivals feature science fiction or fantasy films released in American theaters, it's that magnificent. However, when all is said and done, when you take away all the visual splendor of this production this is simply the fascinating story of one strong god-like man with two separate identities (the second being the first's reincarnation) and the two women (and their reincarnations) who loved him obsessively.

Even lead actor Bae Yong Joon (Winter Sonata) claimed in his book A Journey in Search of Korea's Beauty not to understand all the legendary mysteries of the four gods (Turtle-snake, White Tiger, Blue Dragon, and Phoenix) presented in the show, and only began to study them more deeply after the show was over. He wrote that each episode was filmed like an epic movie and he simply had no time while actual filming was going on for over a year and a half to study the legends and history involved in depth. He was also injured physically while making this demanding drama, injuries which plague him to this day. Bae was paid 250 million won per episode, multiplied by 24 episodes equals 6 Billion won (5,791,503 in US dollars), the highest salary to date paid to any Korean actor. The Legend also boasts a sumptuous, absolutely gorgeous music score by genius Japanese composer Joe Hisaishi, who wrote many of the scores for the great Japanese animator Hayao Miyazaki's films.

Directed by the late Jong-hak Kim (who committed suicide in 2013), who also directed the historical fantasy Faith, and written by a woman scriptwriter named Ji-na Song with whom he had a long collaboration, The Legend explores a combined part myth, part historical backdrop concerning Dangun, the legendary founder of Gojoseon, and Gwanggaeto the Great of Goguryeo (374â€“413 AD), who was credited with making the areas of present day Korea into one of the mightiest early Asian kingdoms. Dangun was said to be the "grandson of heaven" a sort of Jesus figure who came from heaven, not born of mortal man. The earliest recorded version of the Dangun legend appears in the 13th century Samguk Yusa, which cites China's Book of Wei and Korea's lost historical record Gogi as evidence. The scriptwriter adds her own elements of mysticism to the story to make it a sumptuous romantic feast for the audience.


The Story: Dangun's ancestry legend begins with his grandfather Hwanin, the "Lord of Heaven". Hwanin had a son, Hwang-woong (Bae Yong Joon, who plays the dual parts of Hwang-woong and Damdeok, Prince of Goguryeo, Hwang-woong's reincarnation), who yearned to live on the earth among the valleys and the mountains. Hwanin permits Hwang-woong and 3,000 followers to descend onto Baekdu Mountain, where Hwang-woong founds Sinsi ("City of God"). Along with his ministers of clouds, rain, and wind, he institutes laws and moral codes, and teaches humans various arts, medicine, and agriculture science. 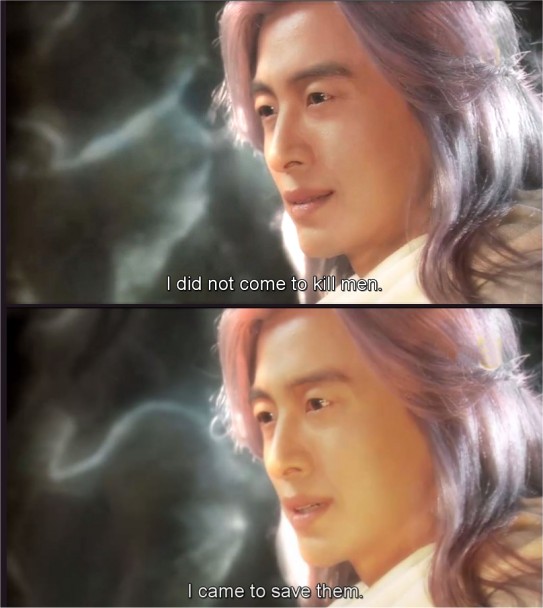 One can definitely see many biblical analogies and imagery developing as this drama unfolds.

The drama begins exploring the Ho-jok tribe (Tiger Tribe) that controlled fire and ruled the world. They did battle against, and assimilated into, all other tribes except for the stubborn Ung-jok (Bear Tribe). The Tiger Tribe and the Bear Tribe fight, and Hwang-woong can not bear to see so many people getting killed so he removes the power of fire from the leader of the Tiger Tribe named Kajin (evocative actress So-ri Moon who later in the drama plays the reincarnation of Kajin named Kiha Seo), and he seals it up into an amulet called the "Heart of Jujak". 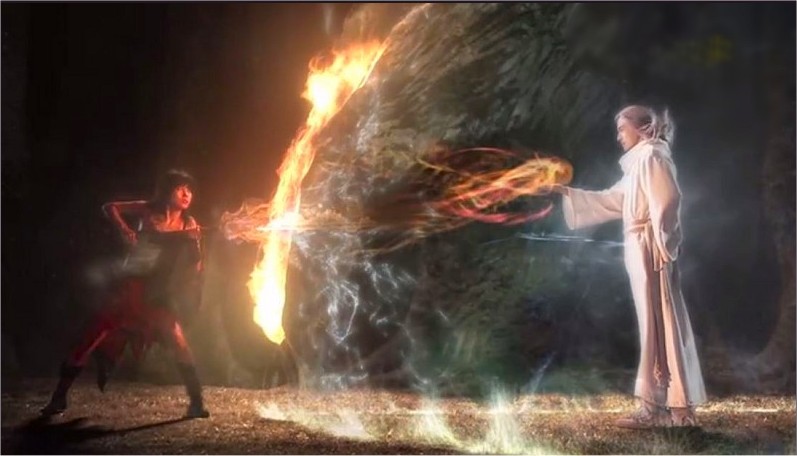 
When her tribe had declared in a war council that they would kill Hwan-woong and take back the power of fire, Kajin then slew her tribe's elders with her own sword. She escapes from her tribe in search of Hwan-woong, deciding to become his woman. He had tenderly healed a potentially fatal battle wound that she had received and she had fallen in love with her enemy at that moment.

However, Hwang-woong gives the amulet containing fire to the woman he loves named Sae-oh (enigmatic actress Ji-ah Lee, who also plays the reincarnation of Sae-oh named Sujini later in the drama). This causes jealousy to be born in Kajin's heart. Kajin was watching them secretly when the amulet was given and was infuriated and so she begins to attack the Bear Tribe. 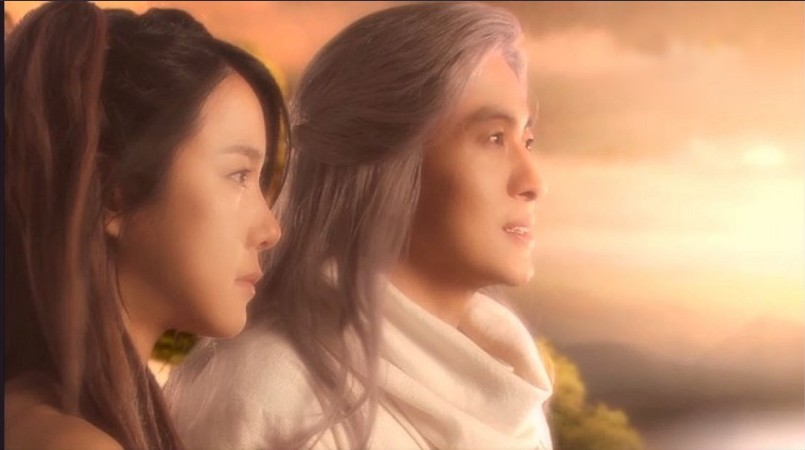 
Sae-oh becomes pregnant with Hwan-woong's child, and after she gives birth the baby is kidnapped by Kajin, who offers Sae-oh a deal to trade her baby for the power of fire in the amulet. Guided by Hwan-woong, Sae-oh refuses but Kajin responds by maliciously throwing Sae-oh's baby from off the top of a cliff, leading to Sae-oh going insane with grief and rage and releasing the power of fire from the amulet (Phoenix), even though Hwang-woong had actually saved the baby. Hwan-woong's gods are called out, the White Tiger, the Azure Dragon and the Turtle Snake and they all fight the Phoenix, but they cannot kill it.

Left with no other choice, Hwan-woong uses his heavenly bow to kill his beloved Sae-oh and manages to seal the power of fire once again into the amulet. Kajin commits suicide by jumping from the same cliff she threw the baby off because she claims she has no more reason to live.

Hwan-woong seals the powers of the three other gods, the White Tiger, Azure Dragon, and the Turtle Snake into different artifacts and leaves them in the care of certain people in the tribe. Hwan-woong returns to the Heavens and gives a prophesy to men that 2000 years later the true King will come to Earth. With the help of the four gods sealed in the artifacts, he will rebuild the land of Jyushin and Peace shall reign. 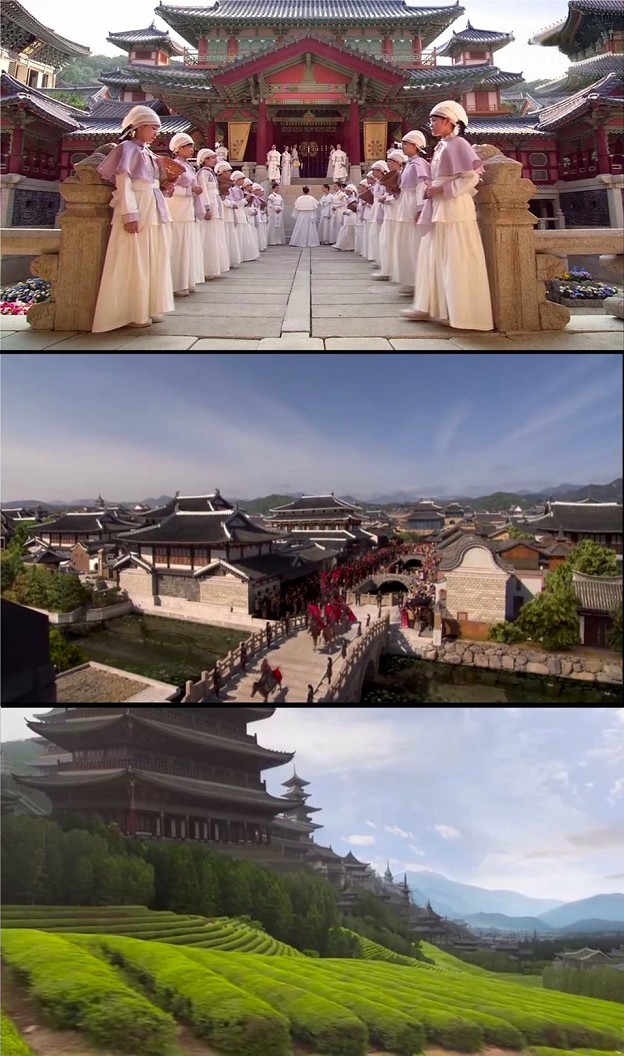 Some of the many gorgeous sets for The Legend

As prophesied, Damdeok, the reincarnation of Hwan-woong, is born. Along with him, the artifacts of the guardians of the king appear again. Damdeok is born in humble circumstances (like Jesus was born in a stable) and meets many difficulties in becoming the King of Goguryeo, mainly because of an enemy, Yeon Hogae (sinisterly handsome actor Tae-young Yoon) who mistakes Damdeok for the murderer of his parents. The reincarnation of Kajin, named Kiha Seo, also signals troubles for Damdeok, as she watches her secret obsession Damdeok fall in love with another woman named Sujini, who is the reincarnation of Sae-oh.

The child Damdeok is played by Seung-ho Yoo from Operation Proposal and the young girl he falls in love with, Sujini, is played by Seung-ho's co-star in Operation Proposal, Eun-bin Park. They first meet each other in a field and then their eyes meet again later in the marketplace. As they grow up they become lifelong friends and confidants, sweethearts, warriors for the kingdom, and mates, having a baby together, just like Hwan-woong had had with Sae-oh. But will that baby be safe, or become an object of vengeance from Kiha Seo? 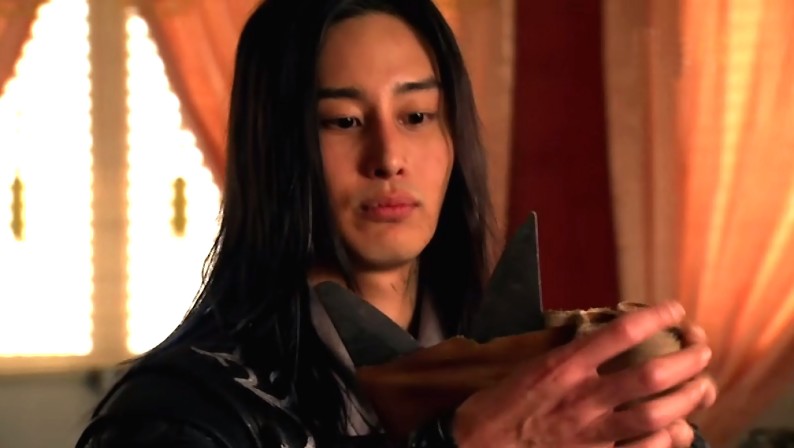 After many battles against Tae-young and his people, Damdeok becomes King, and along with his right-hand man and servant Cheoro (Philip Lee) he reigns his kingdom peaceably, as Hwan-woong had predicted 2000 years earlier.

The ending of The Legend is just as mystical as the beginning. If historical fantasy epics turn you on then you cannot beat The Legend. It's the best of the bunch, with stunning battle scenes, love scenes, music score, and climax. There are great secondary characters to care about too, I just cannot cover all of them or I would be writing a book instead of a web page. The Legend is definitely an Experience, not just a drama. I was completely exhausted after watching it, but just to spend 24 hours with Bae Yong Joon in his greatest roles since Winter Sonata and his film April Snow was worth it!

I will end this page with various fan drawings I've collected from over the internet of Bae Yong Joon in The Legend. 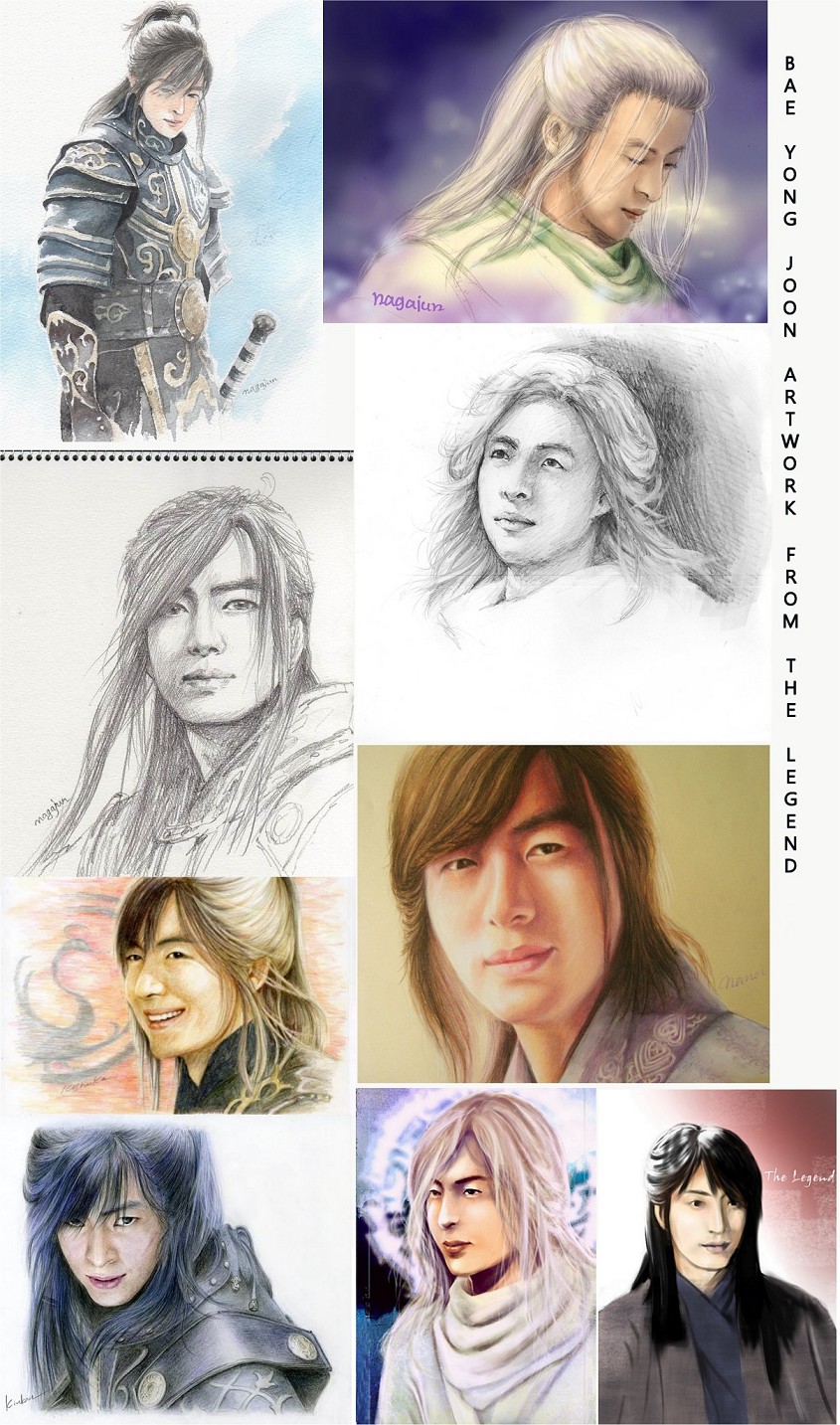