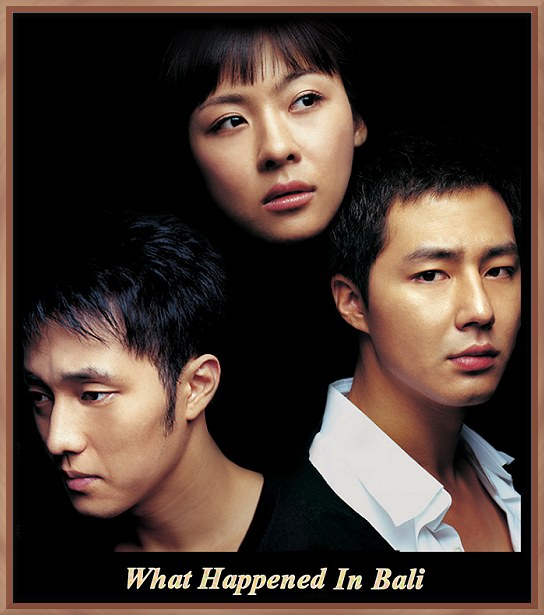 I plan on telling you ahead of time what the conclusion of this K-drama is, truthfully so that you will not waste your time watching 2004's What Happened In Bali! Trust me: there are far better shows to watch than this one! If I had known ahead of time how this drama ended I never would have wasted 20 hours of my precious time on it, despite loving the three stars shown above in other dramas and films. For actor So Jisub, one that came out the same year is the unforgettable I'm Sorry, I Love You. He gives his best performance in that drama. Watch that one instead! For actress Ji Won Ha watch Secret Garden instead, it's delightful, upbeat, funny, romantic and sweet. For actor Jo In Sung watch the melodrama in which he shines the most, That Winter, The Wind Blows. These are all excellent shows with beautiful performances, production values, and gorgeous music soundtracks that you will enjoy. Skip this one. Really.

The "something" that happens in Bali is a double murder - suicide, leaving you with none of the main characters left alive! None of these characters ever truly love one another: they use each other and their god is money. Even the So Jisub character, who seemed the most admirable in the beginning, succumbs and embezzles millions of won (Korea's currency) from Jo In Sung's company and skips out of town. Ji Won Ha's character basically sells herself for money and luxuries like a prostitute. There's no redemption, there's no humor, the production values of this show were dire (the apartments that two of the characters live in are total slums and hurt my eyes to look at). Jo In Sung's character is weak and childish, selfish, stupid and is forced to marry someone he does not love because his rich father beats him with a golf club. The whole show is just dire and will depress you. Watch something more positive and beautiful and inspiring instead. Watching these characters for 20 episodes in this terrible, unlikable script is like listening to someone scrape chalk against a blackboard for 20 hours!

Stay away. I hate to say this about any show these actors are in but it's the truth. It's a waste of time. Sorry.